Dawson W. Geuder faces up to three years and six months in prison for the felony charge of throwing or discharging bodily fluids at a public safety worker and up to six years in prison for felony bail jumping.

According to the criminal complaint, Columbia County Sheriff’s deputies were called to a residence Jan. 24 in the town of Lewiston where Geuder was reported to be high on drugs and armed at one point. The deputies entered the residence and were directed to a back bedroom where Geuder stood in a corner with two white pills in his hand.

A deputy asked Geuder to walk toward him and give him the pills, but Geuder closed his hand and said he would not do that, the complaint states. A deputy tried to keep Geuder’s hand out of his pocket by grabbing his arm, at which point Geuder flexed his arm and began pulling away. A deputy successfully brought Geuder to the floor, but Geuder kept his hands under his body and refused to bring his hands out to be handcuffed.

After multiple requests for compliance and attempts to forcibly pull Geuder’s hands out, a deputy deployed his taser into Geuder and they were then able to secure him in handcuffs. As they escorted Geuder out of the building, Geuder tried pulling away and screamed profanities at the officers. Inside the squad car, Geuder kicked at the door and cage and so the officers placed his legs in restraints.

Geuder reportedly spit on a deputy while looking directly at him and continued spitting at the officers even after a spit net was applied. At the jail officers found four Alprazolam pills (a controlled substance) and two baggies of suspected marijuana.

Geuder, who remains in custody on a $2,000 cash bond, has a preliminary hearing scheduled for Feb. 5 in Columbia County Circuit Court.

In a separate case in Columbia County, Geuder is charged with felony possession of THC, second offense, and misdemeanors of drug paraphernalia possession and misdemeanor bail jumping. His preliminary hearing for these charges is also Wednesday.

A 32-year-old Portage man faces up to 12 years in prison for an alleged felony delivery of methamphetamine. 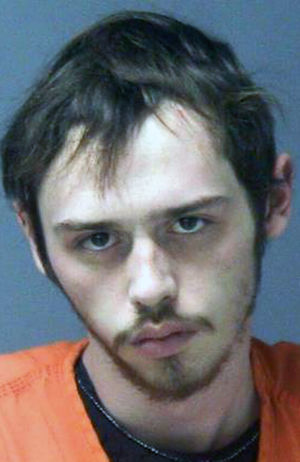