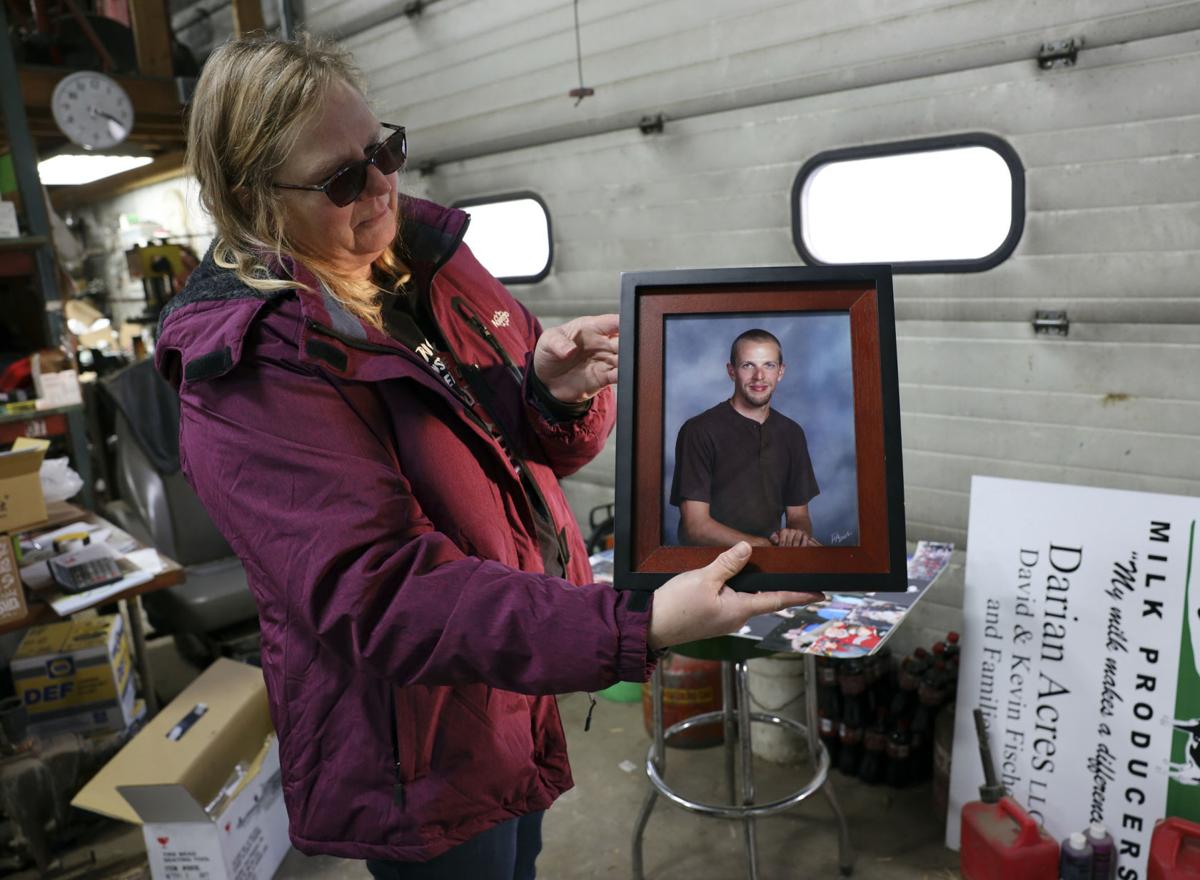 Amy Fischer is seen with a photo of her son, Brian, on her family's 350-cow dairy farm, Darian Acres, in Rio, Wis., on Dec. 18. Brian died by suicide at the age of 33, on Dec. 21, 2016. The Fischers attribute his death to a combination of stress from work, a drinking problem and depression from a recent break-up. Dairy farmers and their advocates say numerous stressors are leading to a mental health crisis in their industry, including financial pressures, long hours, labor shortages and harsh weather. 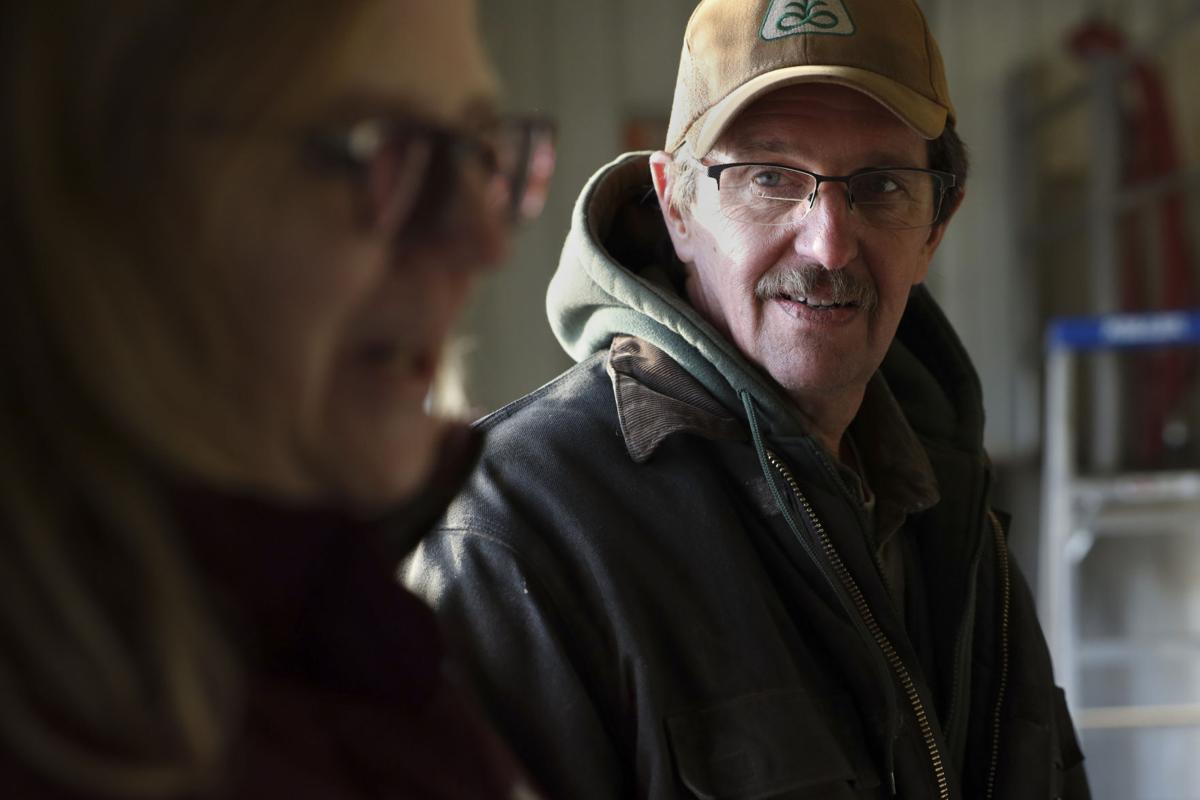 David and Amy Fischer stand together in the milking barn on their 350-cow dairy farm, Darian Acres, in Rio, on Dec. 18. Their son, Brian, died by suicide in 2016. “It don’t go away,” David Fischer said about the heartache he feels. “He should be here.” 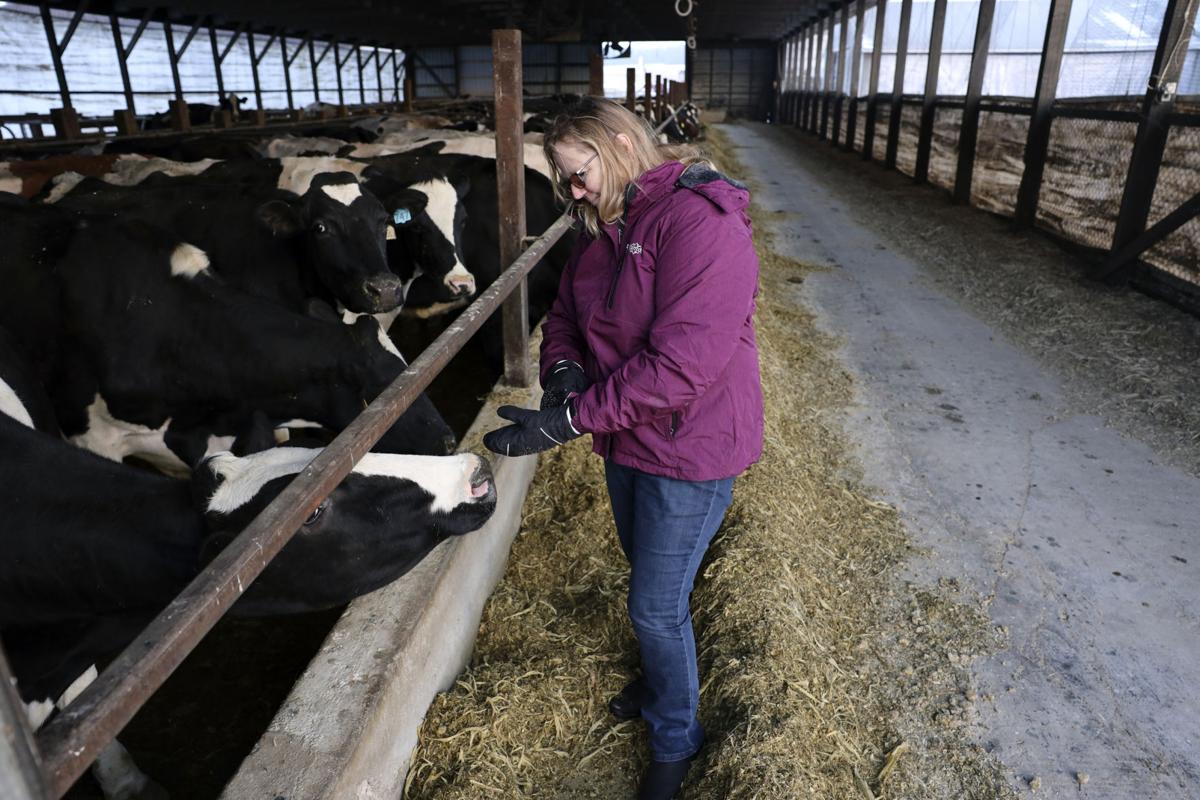 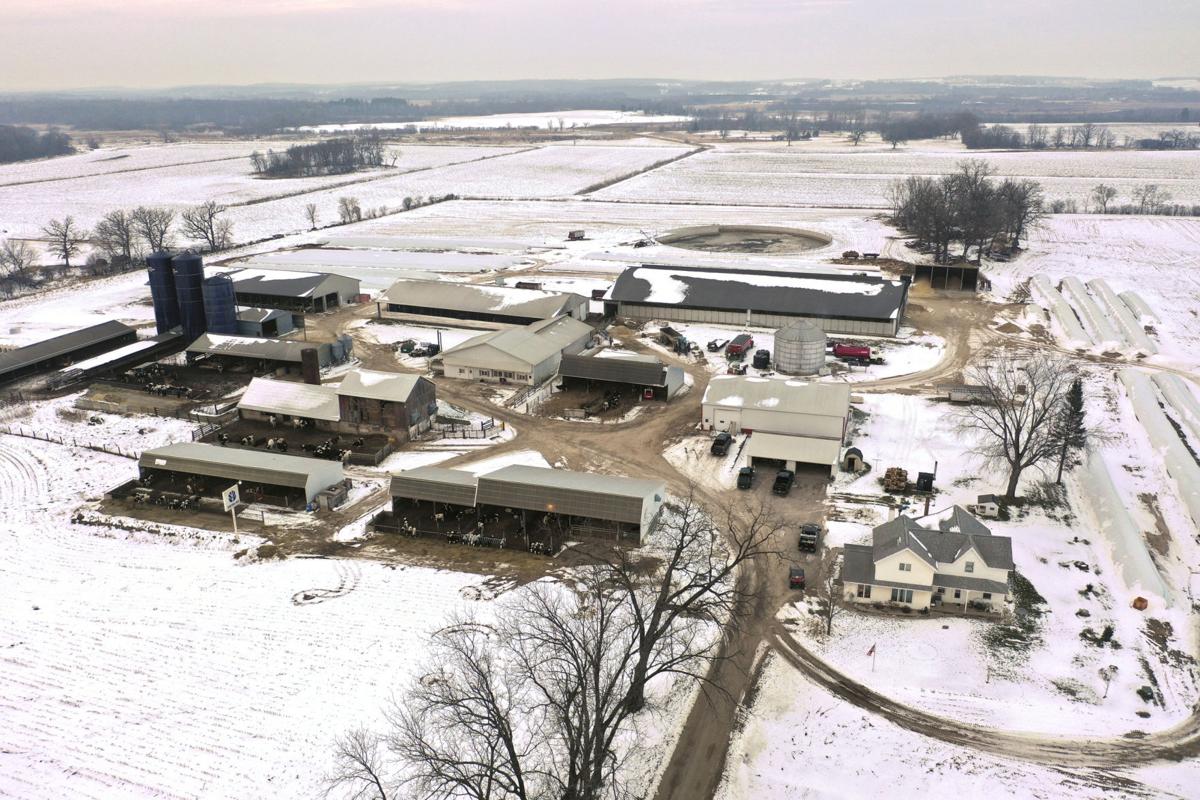 Darian Acres dairy farm in Rio., Wis. is seen on Dec. 20. The farm belongs to the Fischer family.

It was Wednesday, Dec. 21, 2016. David Fischer had just arrived for work at his dairy farm in Rio, Wisconsin. A slight breeze punctuated the freezing, grey morning.

His drive to work is just 2 minutes. From where he parked his pickup truck on the farm’s gravel driveway, he could see his house on the top of a hill.

Fischer, who owns the roughly 350-cow dairy farm with his wife, Amy, was ready for another day of work alongside his twin sons, 33-year-old Kevin and Brian, and a handful of other employees.

Like most days, the lifelong dairy farmer had plenty to do. He didn’t expect anything different from his usual 12- or 13-hour work day on his farm about 50 minutes north of Madison.

Fischer set off toward the north end of the dairy farm. He walked past the dozen-or-so buildings to chop wood that would heat water in the milking barn and warm Kevin’s house on the property.

Fischer soon realized that Brian hadn’t shown up for work. He couldn’t shake a feeling that something was wrong.

Was Brian sick? He would have called or texted. Did he take off unannounced to go snowmobiling? That wasn’t like Brian either.

Around midday, while taking a short break for lunch, Fischer and his son Kevin set off to Brian’s house to drop off a feed wagon and check on him. What they found confirmed Fischer’s nagging fears: Brian’s body. He had died by suicide.

Brian’s death blindsided the Fischers. And four years later, they still ask themselves the same question over and over again: “Why?”

“It don’t go away,” Fischer said about the heartache he feels. “He should be here.”

Financial pressures, long hours, labor shortages, harsh weather — these are all conditions that farmers and their advocates say are escalating stress and depression among Wisconsin’s dairy farmers. And nationally, people who run farms are much more likely to take their own lives than in many other professions. In response, the state of Wisconsin and farmers themselves have launched a series of programs to help them cope.

The events leading to Brian’s death were complicated. The Fischers said Brian had a drinking problem and had just gone through a bitter breakup that ended a decade-long relationship.

The family had also invested heavily in expanding the farm, aiming to make it financially viable for the two brothers in the future. As Fischer describes it: “You have to grow. If you don’t grow, you’re getting behind,” echoing a common expression among dairy farmers in recent years.

With the expansion in mind, Amy said Brian was giving farming “100%.” Said Amy: “He (Brian) could be in the tractor for 60 hours straight.”

The stress from work, the drinking problem and serious relationship woes frustrated Brian, the couple said. Brian had a “short fuse” before his death, Fischer said, but the couple never imagined he would take his own life.

Conversations with 10 current and former family dairy farmers in Wisconsin revealed that work days, which often start before the sun rises and end well after it sets, are jam packed with stressors that make coping difficult.

Stress “absolutely” winds into every aspect of life on a dairy farm, said Linda Ceylor, a 66-year-old organic dairy farmer in Catawba.

The stressors are almost too many to count, ranging from often grueling daily chores to equipment breakdowns, sick animals, uncooperative weather, unreliable staff and, perhaps the heaviest stressor of them all: low and fluctuating milk prices.

Dairy farmers statewide share these concerns, according to the Wisconsin Department of Agriculture, Trade and Consumer Protection’s 2020 dairy producer survey.

Daily concerns, coupled with a half-decade of serious financial woes, leave Wisconsin dairy farmers in the middle of a mental health crisis, according to the farmers and dairy experts.

In the DATCP survey, 9% of respondents said they felt a need to access mental health services in the past year due to farming challenges, with 6% of respondents actually seeking out help. That suggests that hundreds, if not thousands, of Wisconsin farmers are feeling the crisis.

Data from the Wisconsin Farm Center — which is a part of DATCP and provides social and business-related resources to farm families — indicates the crisis is worsening. The center runs a 24-hour hotline (888-901-2558) for farmers struggling with suicidal thoughts, depression or anxiety.

The center issued 252 vouchers in 2020. That’s a 38.5% increase compared to 2019. And that does not account for counseling that dairy farmers pay for with private insurance or out of pocket.

Wisconsin is seeing more suicides statewide, according to the most recent data from the state Department of Health Services. In 2016, the year Brian died, 862 people in Wisconsin died by suicide.

Suicide deaths also are rising nationwide, according to data from the Centers for Disease Control and Prevention. In 2017, nearly 38,000 working age Americans died by suicide, a suicide rate increase of almost 40% compared to the year 2000.

Roecker, who experienced a deep, financially driven depression sparked by the 2008 financial crisis, founded the Farmer Angel Network, a peer-to-peer support group aimed at getting farmers through tough times.

The farmer from Loganville, Wisconsin — located roughly 50 miles northwest of Madison — said “farmers don’t know where to turn” when they’re struggling with their mental health, and the group’s monthly meetings provided a space for people to get together and talk.

But since the COVID-19 pandemic set in, the group, many of them regular attendees, hasn’t met. For those with internet access, the Farm Center has launched a new series of virtual counseling sessions starting in February for farmers and farm couples.

Thirteen of the people interviewed for this story said the financial devastation many farmers have faced in recent years is fueling the mental health crisis.

Small Wisconsin dairy farms face a particularly dire outlook. Since 2004, the state has lost more than half of its registered dairy herds, according to data from DATCP. That’s nearly 9,000 fewer herds, with 15,904 registered herds at the start of 2004 dropping to just 6,949 as of December 2020.

For the thousands of small dairy farms that continue to operate, the stressful fight for survival continues.

“When you talk about (farm) stress and depression, so much of it … is connected to the way that farming is structured,” Becot said. “You might not be losing money, but you might be afraid of losing money.”

Jayne Krull, director of the Wisconsin Farm Center, pointed to the volatility of milk prices — and the short- and long-term uncertainty rooted in that volatility — as a weight carried by the state’s dairy farmers.

“It’s really hard to make a plan for your farm when you don’t know what you’re going to be getting paid,” Krull said.

The last five years have crushed family dairy farmers in America’s Dairyland. The price for milk, a commodity, has varied widely on a month-to-month or even day-to-day basis, leaving dairy farmers financially unstable. This year, prices fluctuated between a low of $13.60 per hundred pounds of milk in May to a high of $22.30 in July, U.S. Department of Agriculture data show.

“Our investment keeps going up and up and up,” Roecker said, “and our return goes down and down and down, and there’s just no profit in it.”

Like many of his peers, Jerry Volenec, a dairy farmer in Grant County, has seen the financial burden of dairy farming only worsen throughout his career.

After he finished college, Volenec started dairy farming full time, initially milking 70 cows. He grew his herd over time, following — but not enjoying — the mantra of “get bigger to survive,” and today milks 300 cows three times per day.

Even still, he’s struggling to get by. Volenec said he has never been “terribly comfortable” financially and only breaks even through “great personal sacrifice.”

As Volenec has scaled up his operation, something that was supposed to lead to greater financial stability, he’s pinching pennies and taking on more of the day-to-day work — and stress — himself. He said the increased workload has harmed his family life and his marriage, but he’s not sure what else he can do.

“The happiness and joy has been sucked out of me,” Volenec said. “I don’t want to be this guy.”

Reporting for this story was supported by funding from the Pulitzer Center for Crisis Reporting. The nonprofit Wisconsin Watch (wisconsinwatch.org) collaborates with Wisconsin Public Radio, PBS Wisconsin, other news media and the University of Wisconsin-Madison School of Journalism and Mass Communication.

JUNEAU – A 42-year-old Beaver Dam man was placed on a $50,000 cash bond during his initial appearance in court Monday after Beaver Dam Police …

A Janesville man accused of homicide will remain in custody in lieu of $5 million cash bail facing further court proceedings.

Mauston woman arrested with more than 2,500 grams of THC, allegedly

A Mauston woman who allegedly had more than 2,500 grams of THC in her possession is facing drug charges after a traffic stop.

Amy Fischer is seen with a photo of her son, Brian, on her family's 350-cow dairy farm, Darian Acres, in Rio, Wis., on Dec. 18. Brian died by suicide at the age of 33, on Dec. 21, 2016. The Fischers attribute his death to a combination of stress from work, a drinking problem and depression from a recent break-up. Dairy farmers and their advocates say numerous stressors are leading to a mental health crisis in their industry, including financial pressures, long hours, labor shortages and harsh weather.

David and Amy Fischer stand together in the milking barn on their 350-cow dairy farm, Darian Acres, in Rio, on Dec. 18. Their son, Brian, died by suicide in 2016. “It don’t go away,” David Fischer said about the heartache he feels. “He should be here.”

Darian Acres dairy farm in Rio., Wis. is seen on Dec. 20. The farm belongs to the Fischer family. 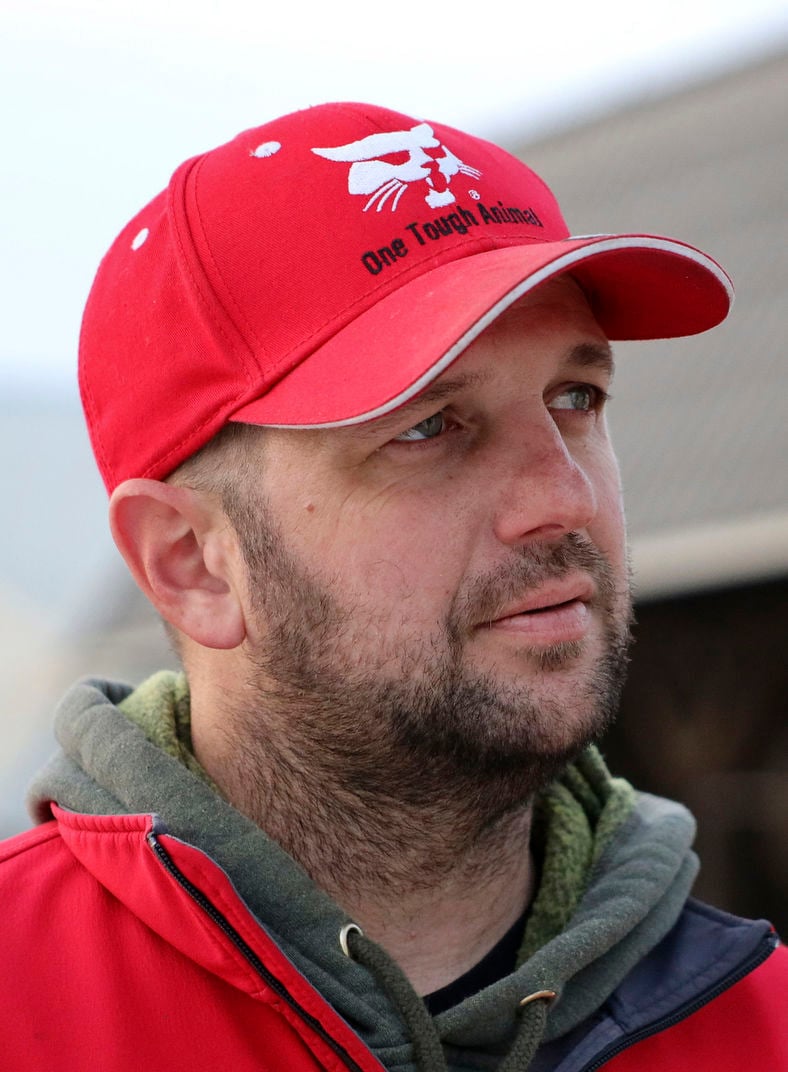