The Portage School Board chose its new member Monday from a field of nine candidates after five rounds of voting and a coin toss.

“I feel terrible that it had to come down to a coin flip and that,” said Portage District Administrator Josh Sween, “but honestly everybody who interviewed tonight would be a phenomenal addition to this board.”

Ellen Stevenson, of Endeavor, ultimately won the seat recently vacated by former Vice President Chad Edwards, who resigned due to a move. Stevenson will serve the remaining seven months of his term.

Sween said when the district announced the vacancy, he expected two or three applicants.

“But to have nine people interested in joining the Portage Community School District board, that is a great problem to have. It means we have community members who are interested and want to be part of the school district and want to help us move the district forward,” he said.

About the new member

A former public school teacher and currently a stay-at-home mother to four children, Stevenson said she felt like serving on the board would be a perfect fit. Her children attend the district, she said.

“Education has been my passion since young adulthood and serving the community in this capacity would be an honor,” she said. “It seems easier and easier to have and express opinions these days, but for me this would be a way that I can actually take an active role.”

She told the board she appreciates the district’s “strong history of being fiscally responsible,” and believes it’s headed in the right direction. It should continue to seek opportunities to increase enrollment and attract educators, Stevenson said.

“I’m determined to leave my community better than I found it,” she said.

According to Stevenson’s letter of interest, she owns the Portage Culver’s and was a middle school teacher from 2002-06 in the Baraboo School District and from 2008-11 in Portage. She listed Craig and Lea Culver, the restaurant chain founders, as references.

The letter said Stevenson has a bachelor’s degree in education from Edgewood College in Madison. She also volunteers for several St. Mary’s groups and local events, is a board member of St. Vincent De Paul and serves on the Portage school district’s co-curricular committee.

Five votes and a coin toss

Candidates were interviewed one at a time in open session while the others waited in a separate room, unable to hear their competitors’ answers. Sween asked each of them the same six questions, after which they had an opportunity to give a closing statement.

Then the six remaining board members voted. The new member needed to get at least four votes to win the appointment.

Members then ranked the three semifinalists by preference. Though intended to eliminate the candidate with the highest number, the ranked-choice vote ended in a three-way tie.

Following board procedure, the candidates — with Athletic Director Ed Carlson acting as a proxy for Stevenson — each flipped a coin, letting them land on the floor. Cross, whose quarter landed on heads while the other two got tails, was eliminated.

Board members filled out a fifth and final ballot, giving Stevenson the four votes necessary to win the seat. Riviers received two votes.

It was the first time in board history that such a decision had to come down to such tie-breaking procedures specified in its policy, according to Board President Steve Pate.

“I’ve been at this business a long time — 35-and-a-half years — and I’ve never seen as many candidates nor ever witnessed this here,” Pate said. “This is all new to me.”

Stevenson will be sworn in at a future meeting when she can be physically present, Sween said.

In other business Monday, the school board:

Portage Community School District is preparing for students arrival Sept. 1 for the first day of the 2021-22 school year.

As families prepare to start another school year under COVID-19, the Baraboo School District is preparing to respond to unmasked students with…

Portage Community School District officials are projecting a higher budget and tax levy next year but a lower tax rate.

Portage School Board passed a Return to Learn plan for the upcoming school year with a few changes to mask policy, virtual learning and school…

Baraboo council to use grant funding for economic planning

Baraboo Common Council members on Tuesday approved hiring a company to create an economic development plan for the city.

Portage’s total school tax levy is rising slightly this year to $12.14 million but its tax rate is dropping again, keeping it lower than it’s … 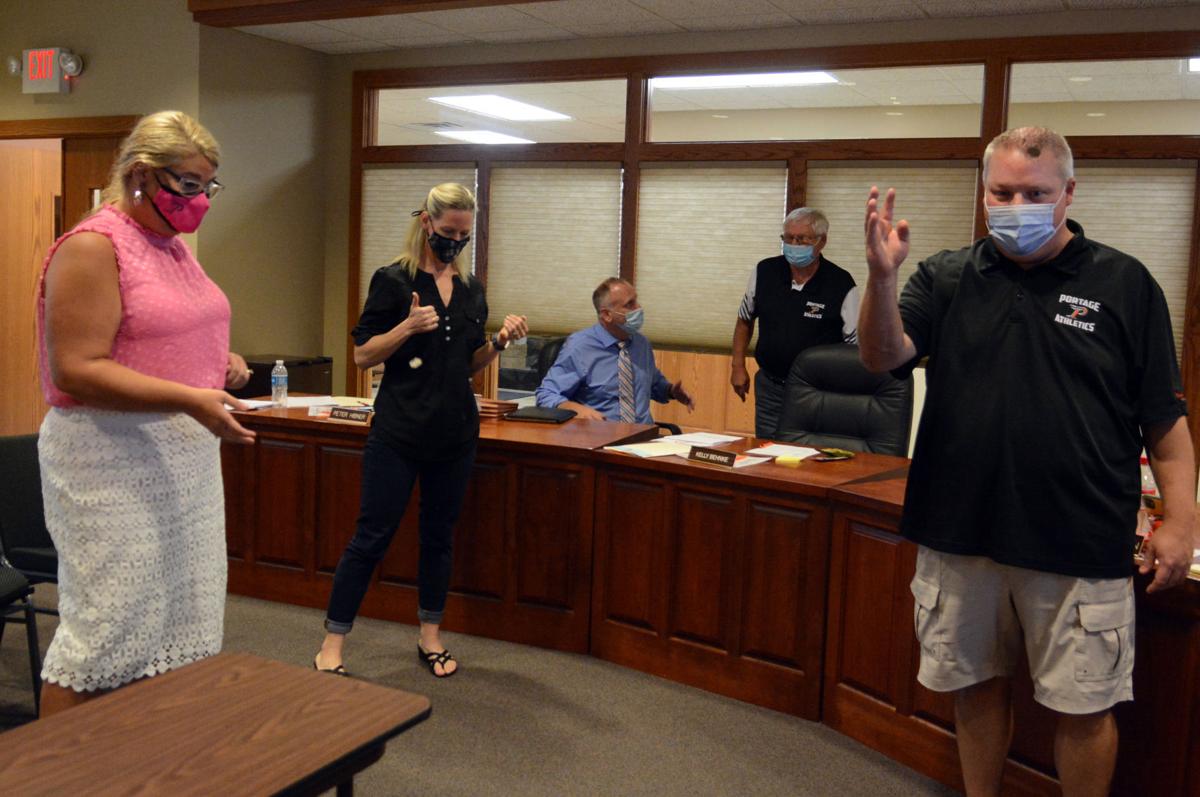 Candidates for the vacant Portage School Board seat, from left, Nicky Cross, Bridget Riviers and, acting as a proxy for Ellen Stevenson, Athletic Director Ed Carlson each flip a coin during Monday’s board meeting after none of the nine candidates received a majority in four rounds of voting. Assistant District Administrator Peter Hibner, left, and Board President Steve Pate are in the background. 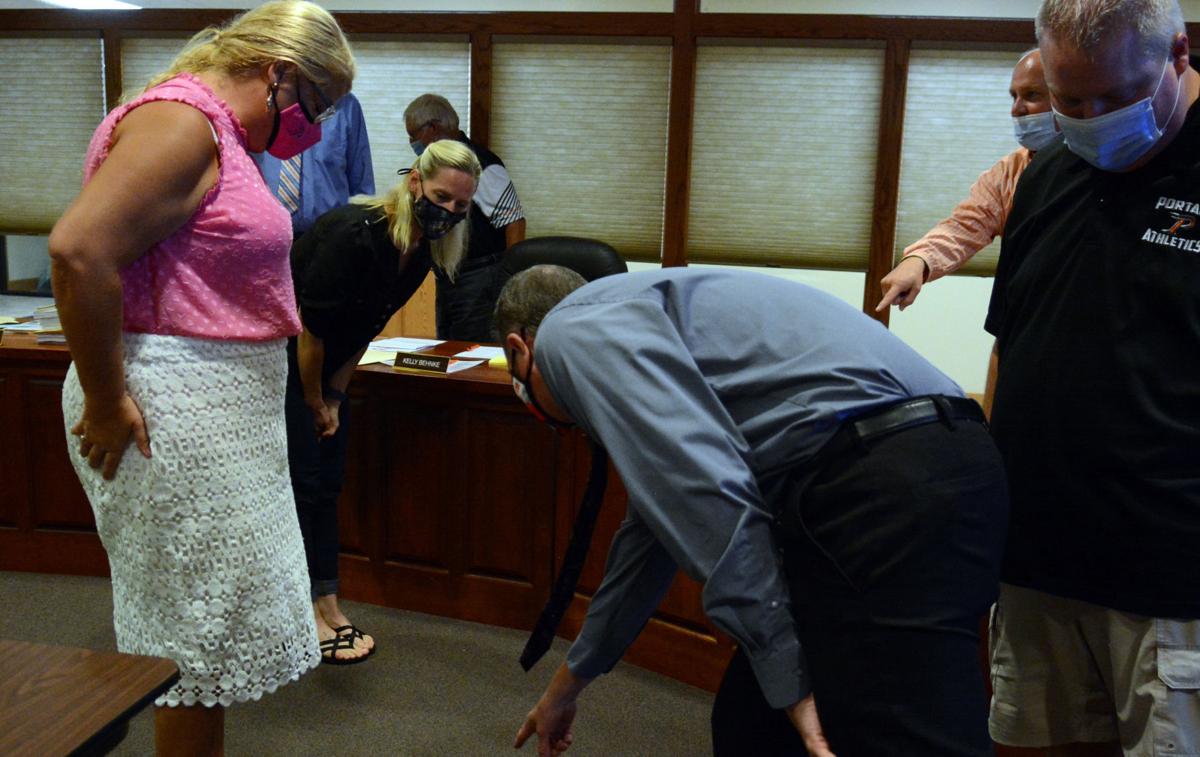 Josh Sween, superintendent of the Portage Community School District, bends down Monday to see the coin flipped by Nicky Cross, left, which eliminated her from the running for a vacant school board seat, as board member Dan Garrigan points. Bridget Riviers, next to Cross, and Athletic Director Ed Carlson, right, acting as proxy for candidate Ellen Stevenson, both flipped heads. Stevenson, attending virtually, ultimately won the seat. 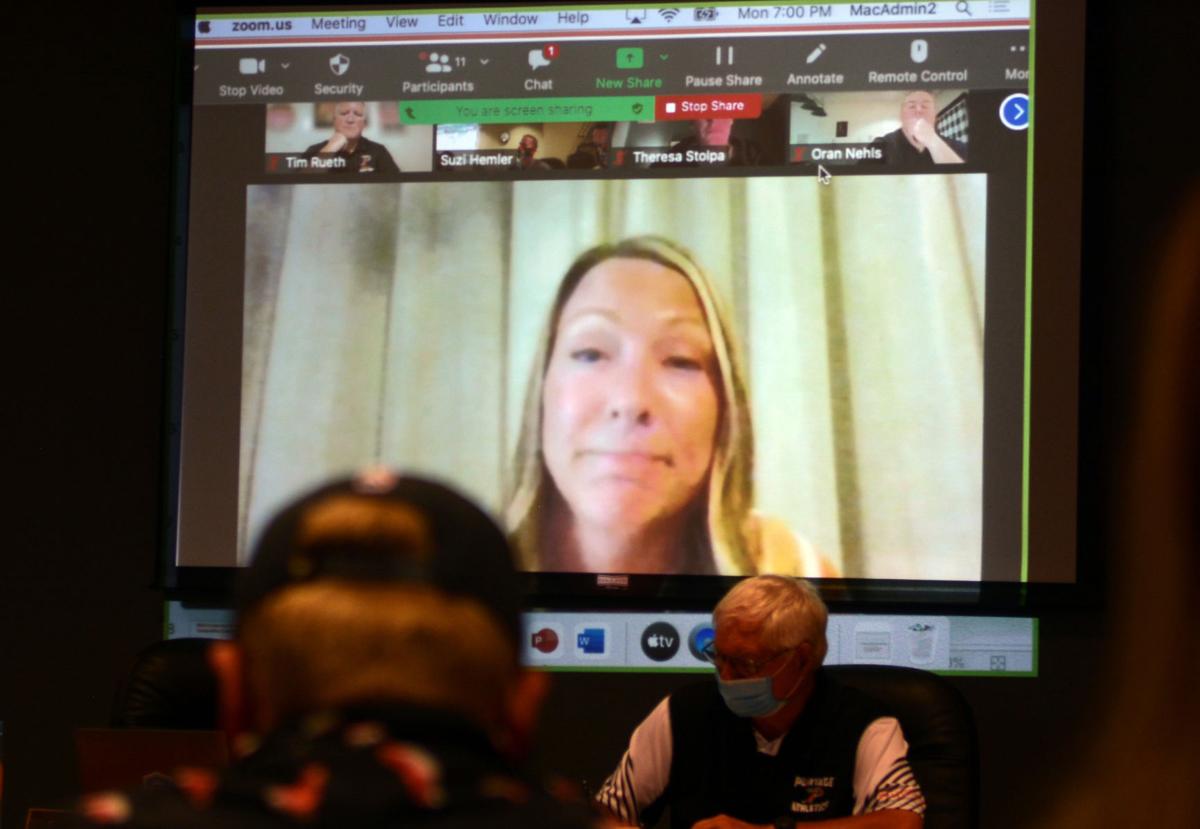 Ellen Stevenson of Endeavor answers questions virtually during an interview Monday with the Portage School Board, which ultimately chose her from a field of nine candidates to fill its vacant seat after five rounds of voting and a coin toss. 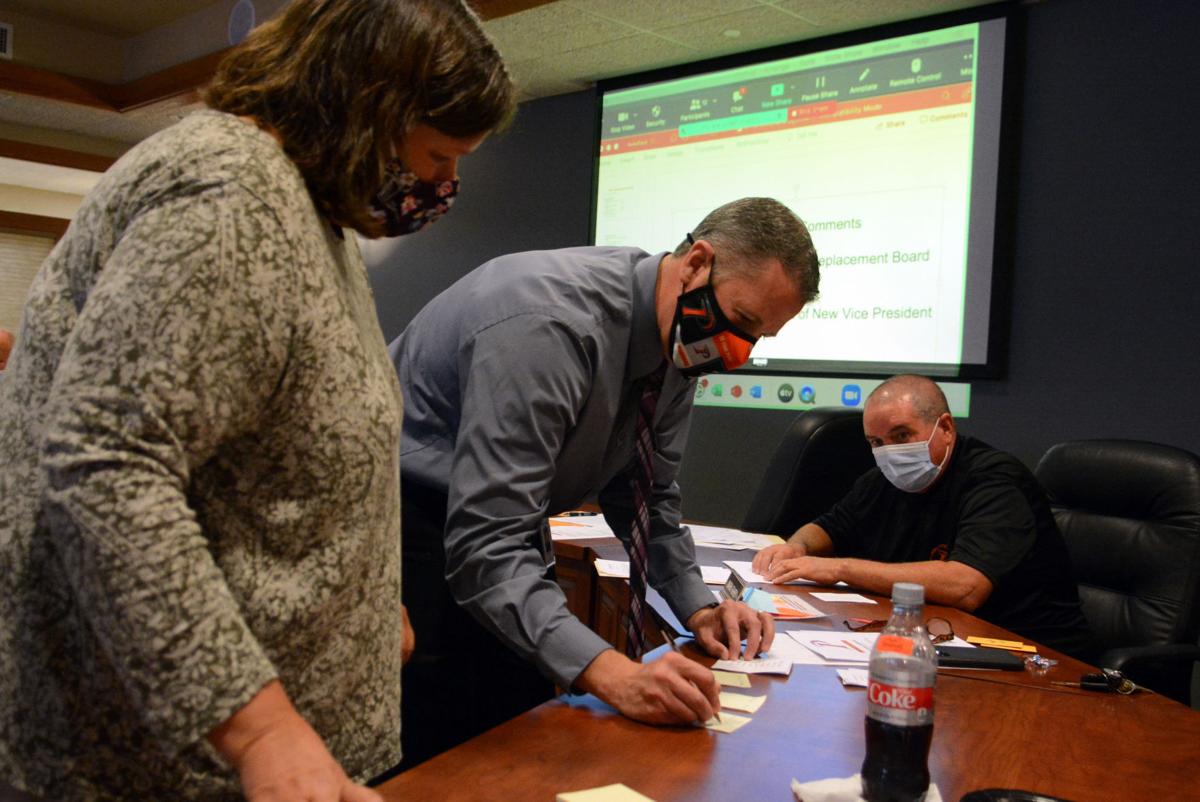 District Administrator Josh Sween double checks the vote tally -- a three-way tie -- in the process to select a new Portage School Board member, as Suzi Hemler, administrative assistant, and board member Mark Fahey watch Monday. Ellen Stevenson of Endeavor ultimately won the seat after five rounds of voting and a coin toss.