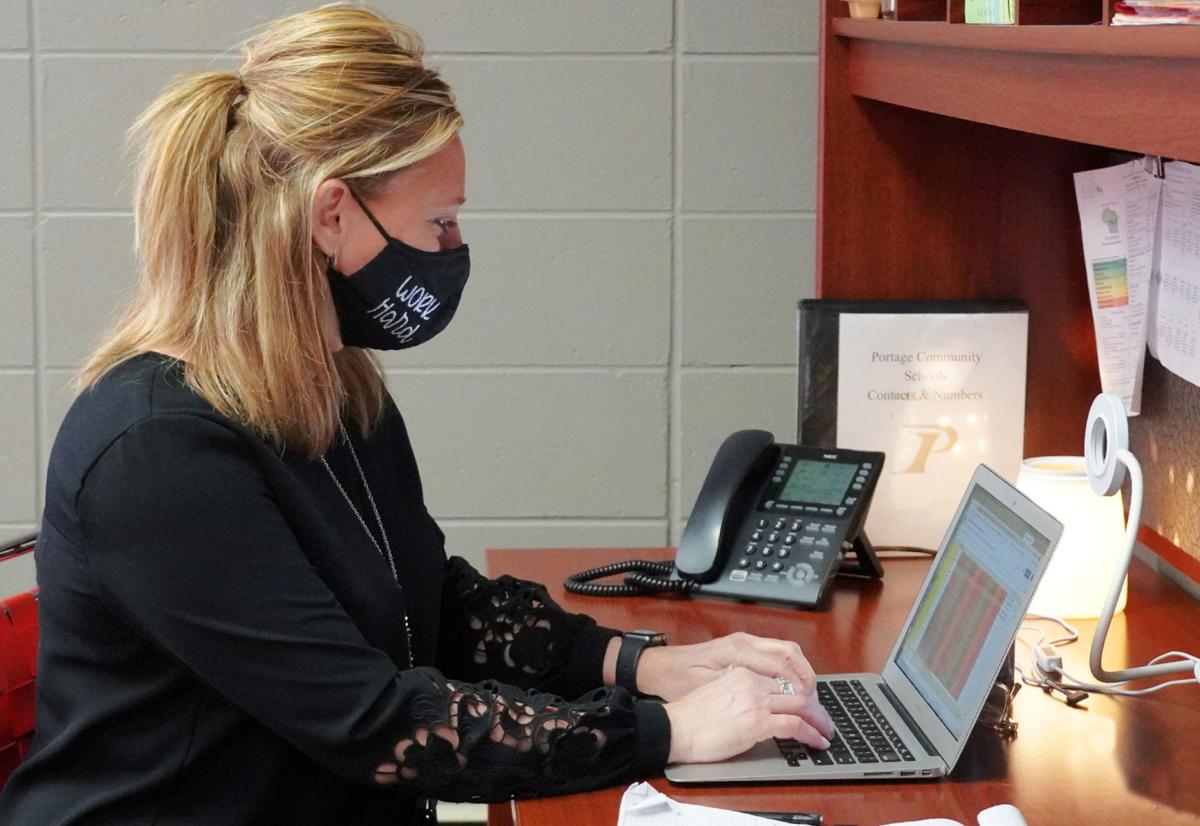 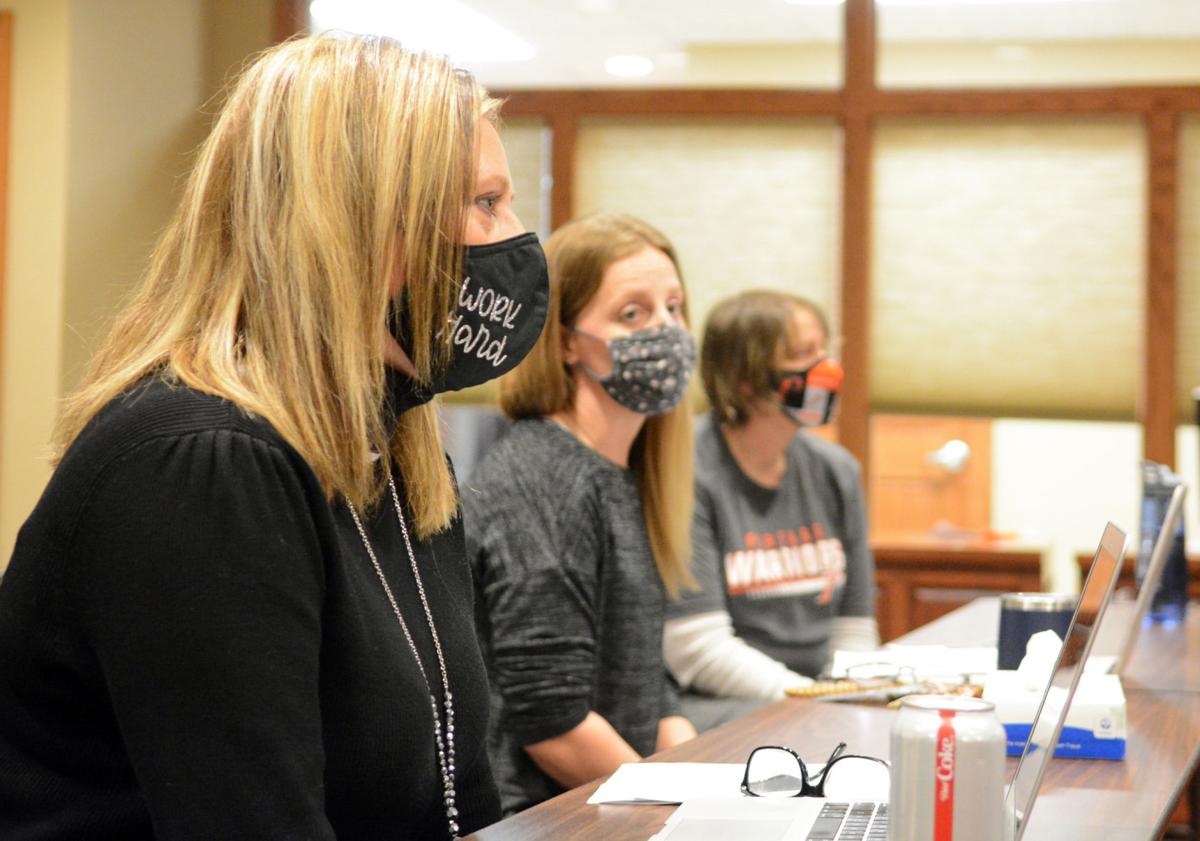 Elementary school principals, from left, Jennifer Garrigan, Salina Thistle and Angela Gulrud present their 2020-21 goals during a Jan. 11 Portage School Board meeting at the district administration building. Garrigan spearheaded an effort to bring outside counseling services to students starting this year at John Muir Elementary, with hopes to expand the program to the rest of the district. 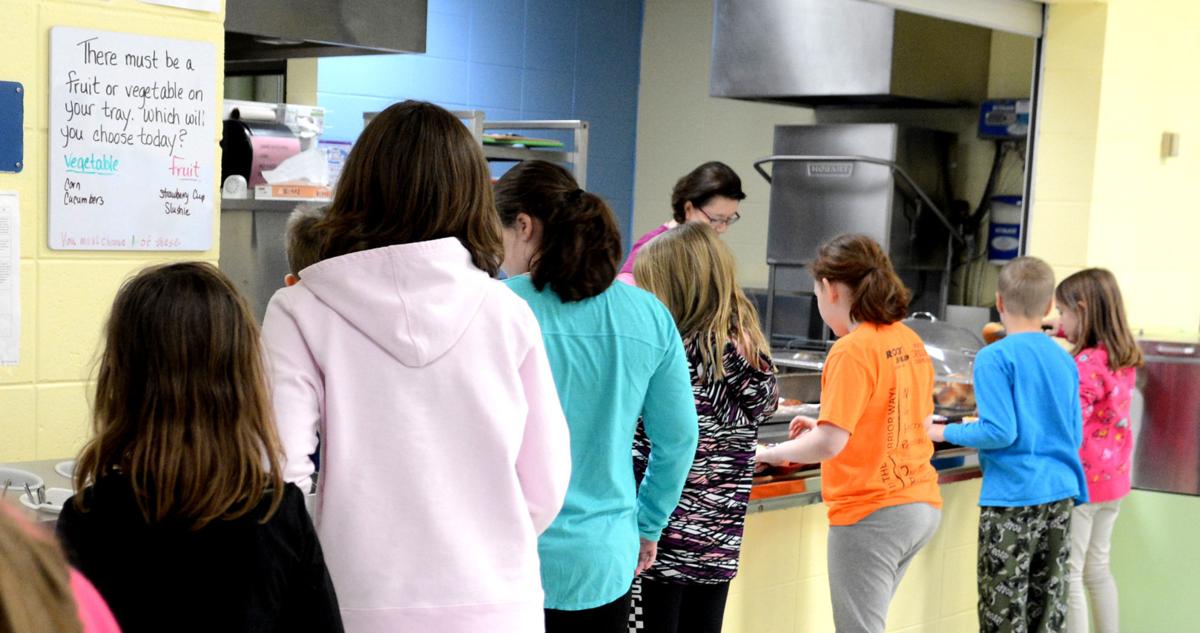 The lunch line in November 2019 at John Muir Elementary School in Portage. John Muir will be piloting a partnership with Innervisions Counseling of Baraboo by providing private space in the school for a counselor to work with students starting this semester.

Some John Muir Elementary students will be able to meet “discreetly” with a private mental health counselor without leaving the building when the school pilots a new program this semester.

Principal Jennifer Garrigan, who spearheaded the effort, said she’s been trying to expand counseling services by finding an outside agency willing to partner with the school for two years. She finally succeeded: The Portage School Board last week approved a contract with Innervisions Counseling of Baraboo to provide counseling at John Muir for students who need more help than the district can give in-house.

The program will start out small, Garrigan said. John Muir has designated a private space away from classrooms that Innervisions will be using to meet individually with five to 10 students — with parental consent — every other week starting in March.

Garrigan said school counselors and psychologists provide most of Portage’s school-based services, “and they do a wonderful job with that.” But school staff were seeing an increase in the number of students experiencing stress, anxiety, aggression and depression, she said.

“We knew that we needed to do a little bit more to help support those students in our buildings,” Garrigan said.

In helping families connect with services outside of the district, she noticed parents and guardians were having difficulty setting appointments for their children because of scheduling conflicts and the time commitment required for taking their children to an appointment and then back to school during the work day. If they tried to set an appointment after school, availability was often limited, resulting in months-long delays before the actual appointments, she said.

Garrigan started asking providers if they would be willing to set up at the school itself. She said her radius started small and grew until she found Innervisions, whose staff shared with her the success they’ve had working with students in the Mauston School District.

Portage District Administrator Josh Sween said he oversaw a similar partnership when he was principal of Mosinee Middle School prior to coming to Portage.

“It’s a great service that we can provide to our families and students,” Sween said. “When I was in Mosinee, we did the same thing where we had a company that worked with my middle school and would come in and provide counseling services to students individually in the building, and it made a huge difference.”

Innervisions’ Colleen James characterized the agreement as “a very good partnership and a needed partnership” to give students more support. The Baraboo center has been around for almost 30 years and is experienced in providing services for a wide variety of situations, she said.

“We’ve always partnered with schools, but more of them are actually getting on board because I think they’re recognizing — especially with the pandemic — that the need is there and the need is increasing,” James said.

She declined to say Wednesday how many school districts Innervisions partners with to provide services for students. The News Republic reported in 2019 that she works with several districts in Sauk and Juneau counties, including the Baraboo School District.

“I guess what I could tell you is that we do quite a bit,” she said Wednesday. “We are actually known for providing, you know, quality service to students to be of support.”

The contract has no cost to the district, Sween said, adding that Innervisions’ services are covered by family insurance programs, including BadgerCare. Parents will be responsible for the cost of services their children receive, but Garrigan said the district could apply for grants in the future to help lower the financial burden on families.

Counselors will share information with parents just as they would if the appointment were outside of school, Garrigan said. Students are referred for services by a parent, guardian or district staff.

This semester, the program is limited to several children whose families the district has already been working with over the last two years, Garrigan said, and it will continue next year at John Muir while staff evaluate how it’s working. She noted that the school needs to do it well before hopefully expanding it to more students and other schools.

Portage School Board President Steve Pate said he applauded Garrigan’s efforts to bring more services to students in a way that keeps them in school as much as possible.

“I’m really proud of Jen’s efforts to get this done, and I think it’s going to be great for our kids,” he said.

He sought assurance that students wouldn’t know which of their peers were receiving mental health services: “I know everyone needs help at some time in their life, but I don’t want to have a stigma attached to them either,” Pate said.

There are enough students already going in and out of classrooms for various classes, services and interventions that their peers won’t know who is receiving mental health counseling, Garrigan said. Sween said it will be done “discreetly” so no others will know about it.

Garrigan, whose husband serves on the school board, thanked the board and school district for their support on the project. She said she worked on it because “mental health is just critical to a child’s success in school and in life.” Students receiving social-emotional support do better academically, she said.

“We see improvements in school climate, classroom behavior, on-task learning and overall wellbeing and connectedness to the school, so that’s really the goal of it, so that we are creating well-rounded students that will be successful in school and life,” Garrigan said.

This spring and fall, Madison College-Portage plans to stick with what’s worked well during the pandemic so far: most classes conducted online…

Like elsewhere in the state, COVID-19 case rates have dropped in the Portage school district, which continues to develop vaccination plans for…

A large classroom space transformed into a vaccination clinic for educators Wednesday morning, taking the Portage Community School District on…

Tentative plans are taking shape to return Portage students to classrooms four days a week on April 12, after district staff have had the chan…

Elementary school principals, from left, Jennifer Garrigan, Salina Thistle and Angela Gulrud present their 2020-21 goals during a Jan. 11 Portage School Board meeting at the district administration building. Garrigan spearheaded an effort to bring outside counseling services to students starting this year at John Muir Elementary, with hopes to expand the program to the rest of the district.

The lunch line in November 2019 at John Muir Elementary School in Portage. John Muir will be piloting a partnership with Innervisions Counseling of Baraboo by providing private space in the school for a counselor to work with students starting this semester.