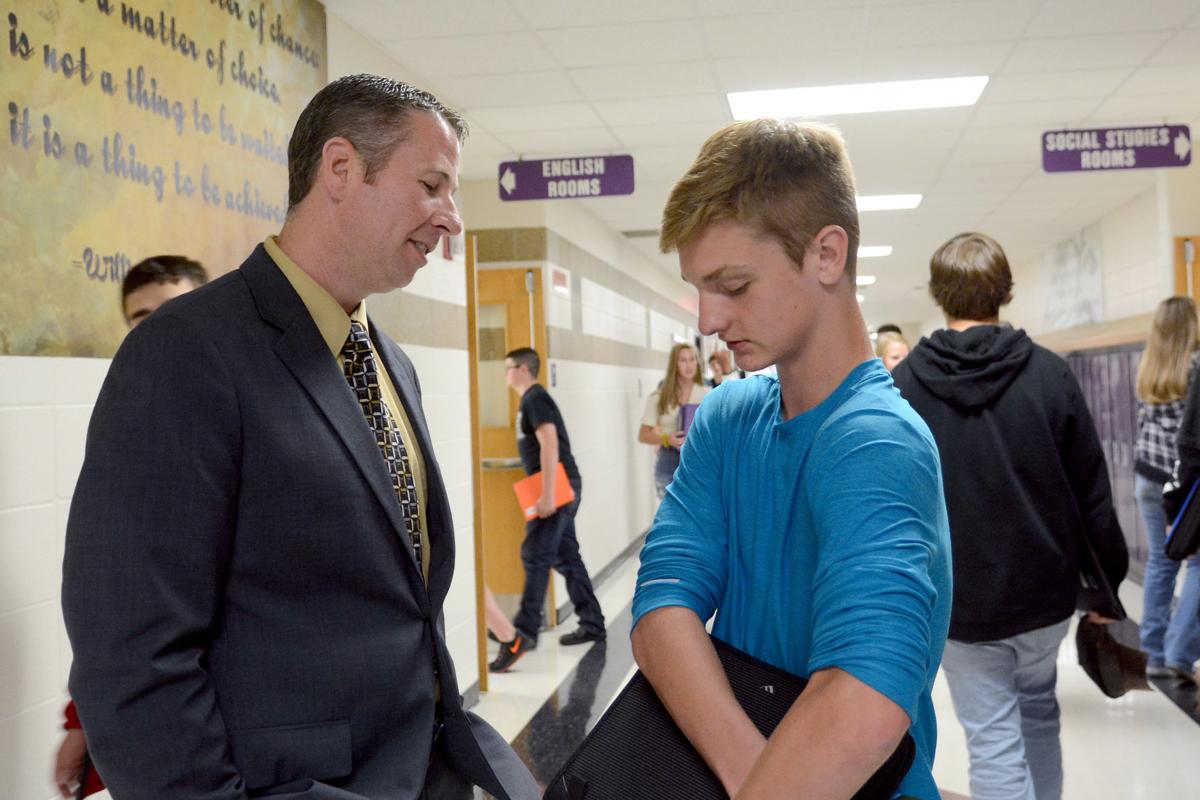 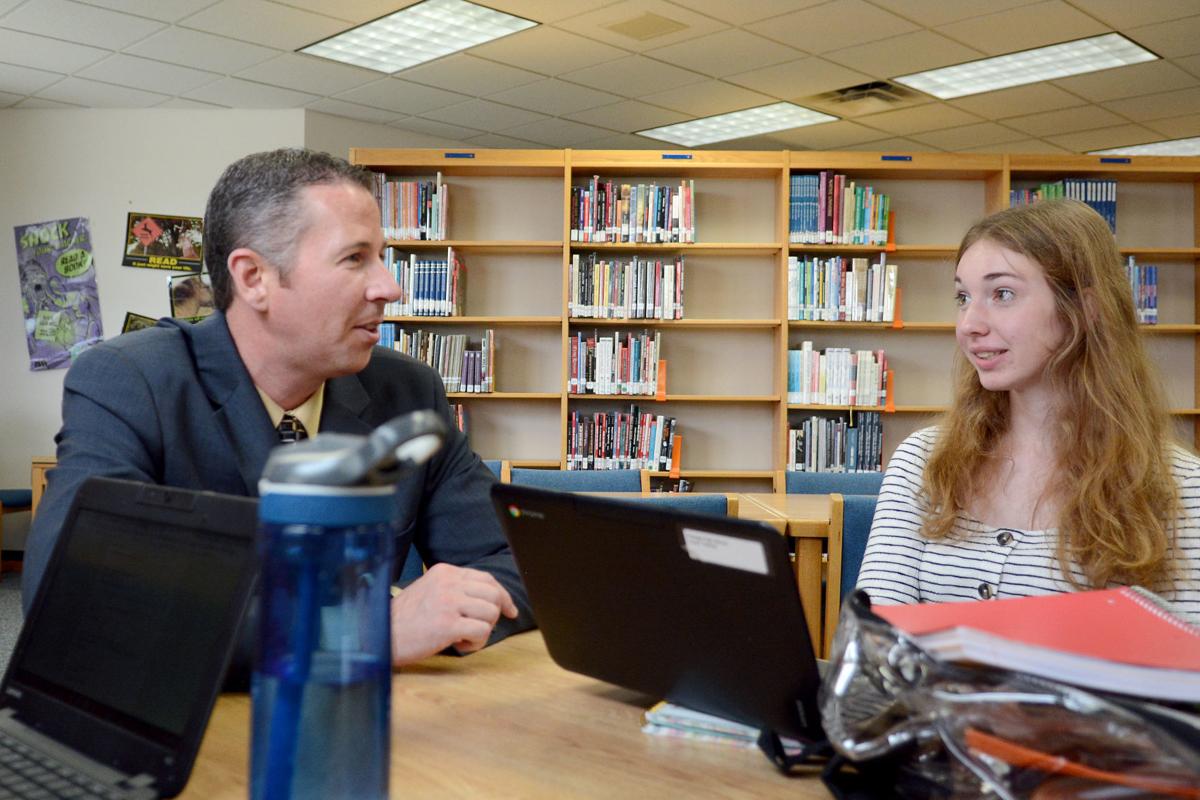 Portage High School’s new principal, Josh Sween, talks to senior Laura Gramer during her honors study hall Wednesday. It was the first day of classes for seniors, juniors and freshmen. 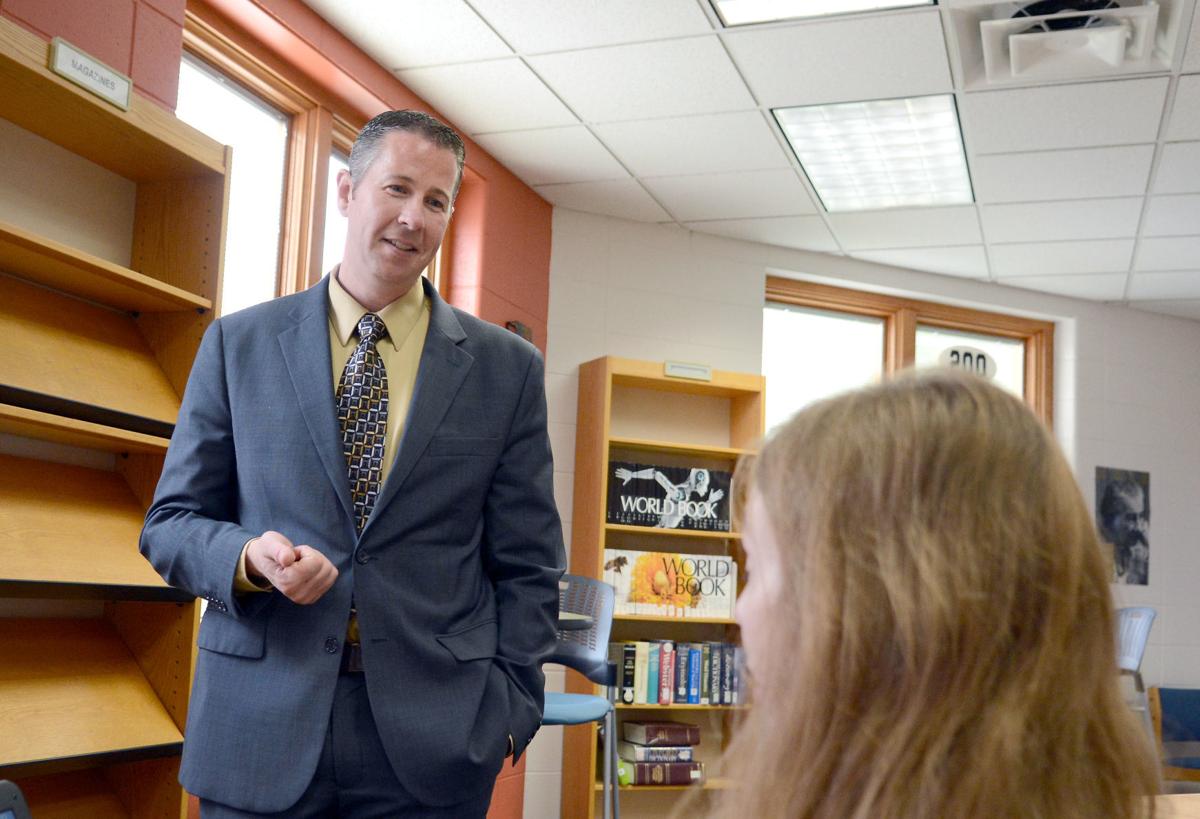 Portage High School’s new principal aims to elevate what he calls a “good” school to a “great” one.

“They’ve been doing awesome things for a lot of years before I got here, but what I look for is how do we move from good to great?” Josh Sween said Wednesday. “Nothing bothers me more than people who will say, ‘Good is good enough.’ I always look at them and say, ‘Why just good? Why can’t it be great?’

“We’re already a good school. We need to get better.”

In July, Sween started his work in Portage after the retirement of his predecessor, Robin Kvalo. It marked Sween’s return to Columbia County: He spent his teenage years in Pardeeville, and went from teaching social studies at Oshkosh West High School to working for the last six years as an associate high school principal and middle school principal in Mosinee.

Now 38 years old, he’s been working in education for 13 years and is a master sergeant in the Air National Guard.

With most of his family still living in the Pardeeville area, he said he’s glad to be back where he knows people, including some of his students.

“A lot of my friends from high school — their kids are now in high school, so it’s kind of a really cool atmosphere to walk back in knowing a lot of people in the area already,” he said.

Portage District Administrator Margaret Rudolph noted Sween’s familiarity with the district. He attended school events with his family before he became PHS principal, according to Rudolph.

“Josh has been an asset to our District in the short time he has been here,” she wrote in an email. “He has experience as an administrator and brings an enthusiasm for learning to all.”

Sween said he and Matt Paulsen, the district’s director of teaching for grades 6-12, have developed a plan to improve students’ standardized test scores and “shore up” some academic programs at PHS.

And he expects people to hold him accountable. He said he lives his life by the Air Force’s three core values: “Integrity first, service before self and excellence in all we do.” If at any point teachers, parents or community members don’t think he’s living up to those values, he said he wants them to tell him.

Mental health is another focus for Sween, which he said he will work on by “building great relationships with students.”

“They need to like you in order for them to come to your classroom and pay attention and want to be there and do great things, so relationships really are the key,” he said of his teaching philosophy.

As an administrator, he plans to model this behavior for his staff by making connections with students, especially those who are less active in academics and extracurriculars.

That goal will be easier at a high school than a middle school — where he was prior to Portage — because he said it’s easier to have conversations and joke around with high schoolers. Sween also likes attending high school activities and seeing the school spirit they rouse.

“High school is what I really wanted, so coming back to something that I love and have always wanted to do is really special to me,” Sween said.

Portage starting over in search for next high school principal

The Portage Community School District has narrowed its options for the next high school principal from 20 to two.

Ahead of this school year, teachers and other staff in the Portage Community School District had their own learning opportunities in the first…

Unlike some of the other 65 teams that compete, Portage students don’t practice ahead of the annual high school math contest hosted by the Uni…

Top administrator for Portage schools announces she will retire in June

The Portage school district’s top administrator announced Friday that she plans to retire at the end of this school year.

Portage schools looking for substitute teachers and subs for other roles

Like schools across the state and the country, Portage is facing a shortage of substitute teachers.

Portage High School’s new principal, Josh Sween, talks to senior Laura Gramer during her honors study hall Wednesday. It was the first day of classes for seniors, juniors and freshmen.