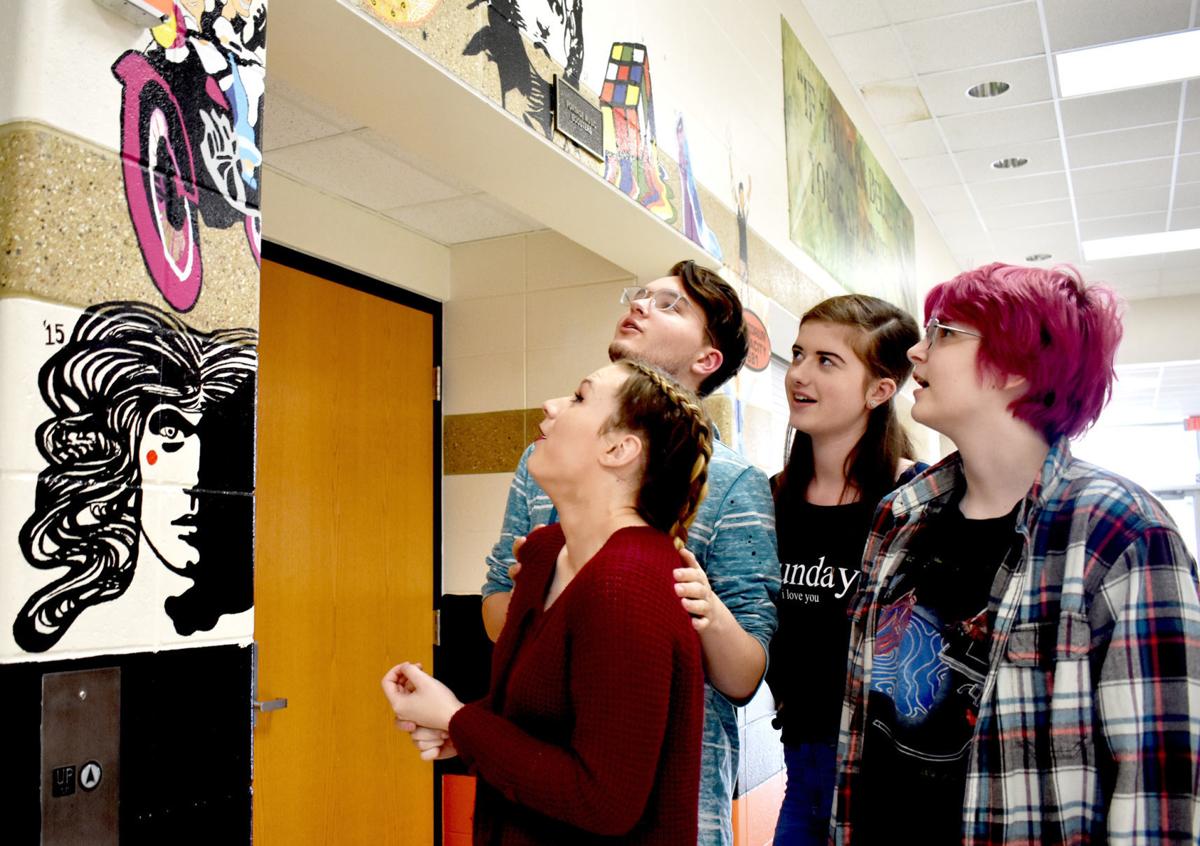 From left, Portage High School students Anna Marie Davidson, Aidan Black, Avery Meierdirk and Alex Deal look Tuesday at their completed painting project that honors all of their school's musicals since the school opened in 1997. 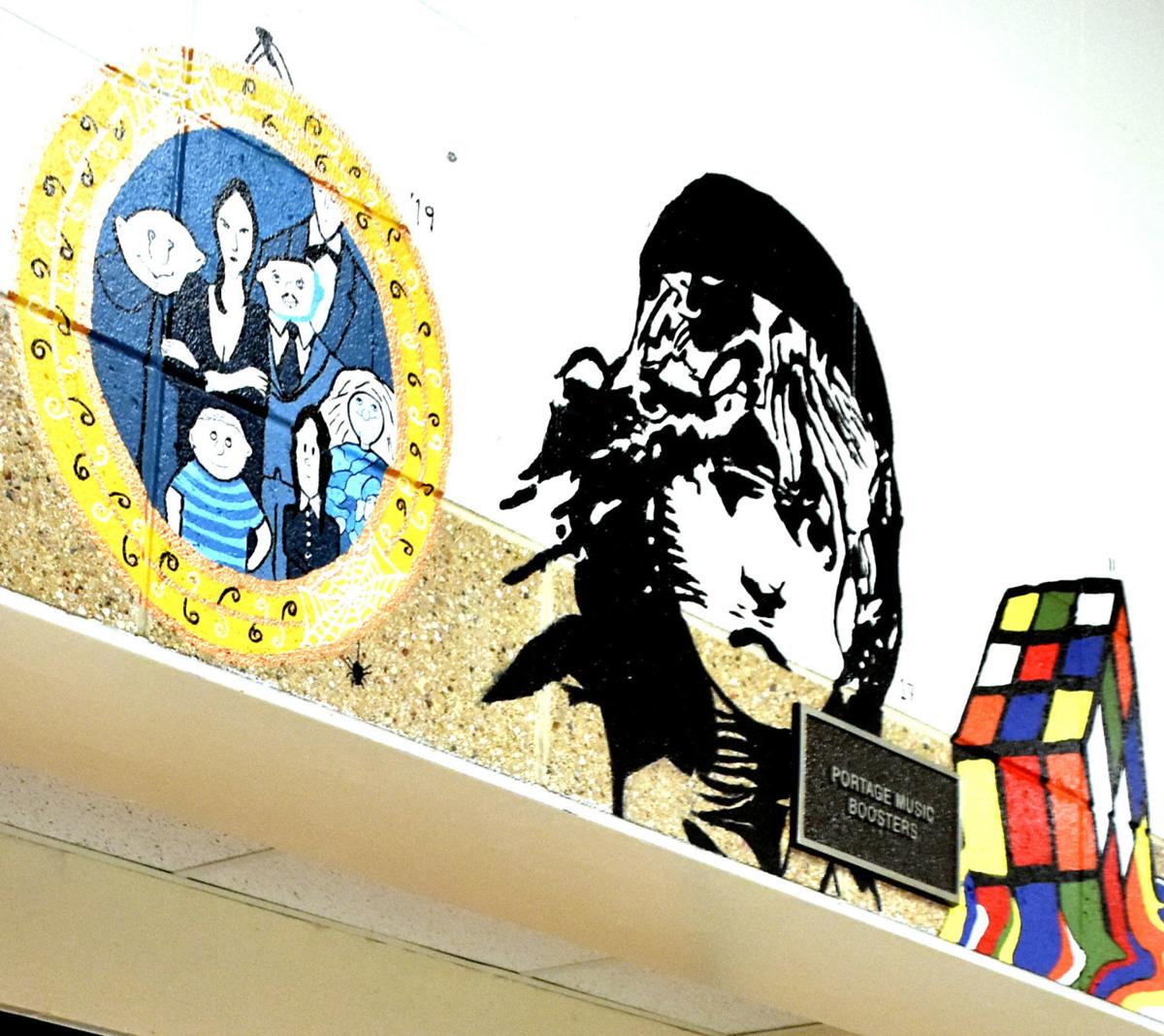 One of two auditorium entrances at Portage High School that's decorated with paintings honoring all of the school's musicals since the school opened in 1997. 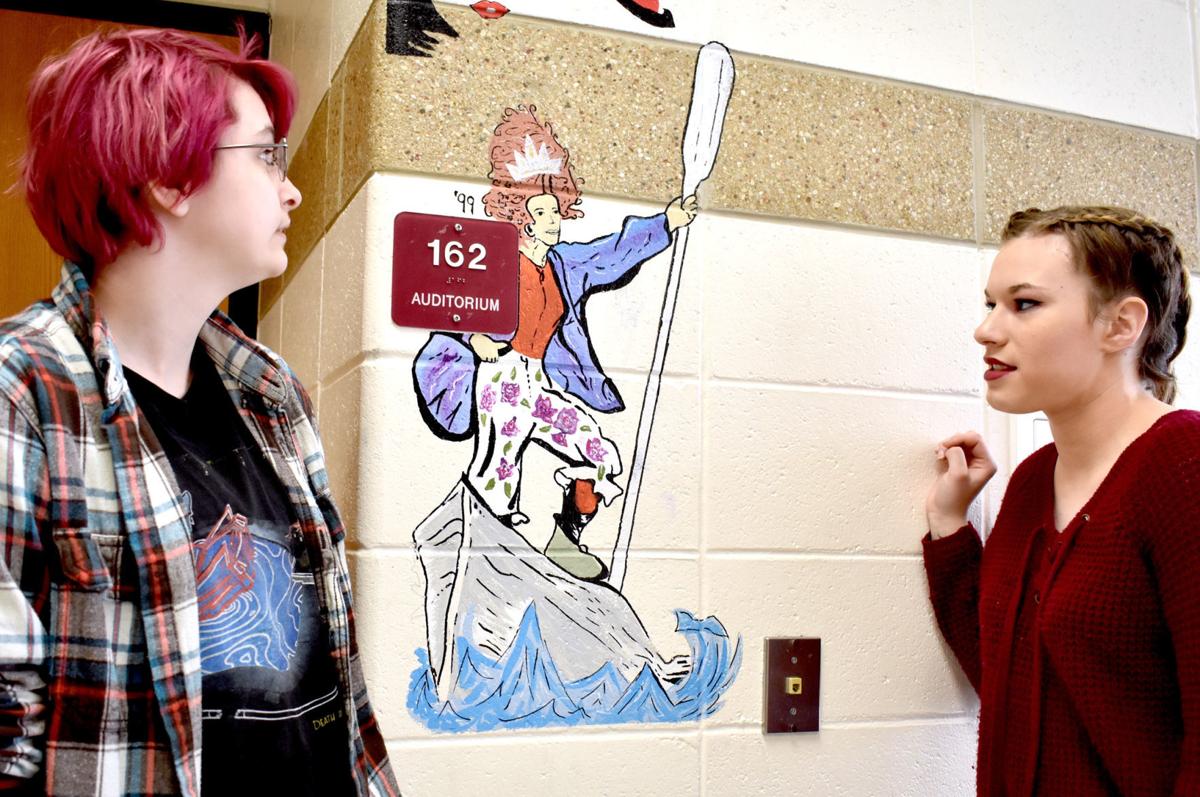 That’s how long it took junior Aidan Black, sophomore Avery Meierdirk and seniors Anna Marie Davidson and Alexander Deal to paint images from every school musical since the school opened on Collins Street in 1997 — from its production of “Camelot” in 1998 to “The Addams Family” in April.

For the past five months, they painted the images at the two commons-area entrances to the school’s auditorium. They finished painting last week.

“I thought about my past and the future, and I want other people thinking like that,” Davidson said.

In the fall, Davidson will major in music education and minor in musical theater at Viterbo University in La Crosse.

The school musicals helped her to develop her post-secondary ambitions.

“Not a lot of people can say they had the guts to perform in front of hundreds of people,” Davidson said. “It’s cool to think, ‘Hey, I did that.’

“It’s something I’ll take with me.”

All of the students who worked on the project have participated in the school musicals, held once per year. Black sought and received permission for the project from Principal Robin Kvalo after he admired a similar project honoring musicals outside of Lodi High School’s auditorium.

He thought about how Portage High School’s commons area, in various displays, honored almost everything except for the musicals and he wanted to give them their due.

“It’s really hard for me to put into words everything that musicals have done for me,” Black said. “It gave me life lessons. I made friends. I worked with the people I liked and I learned how to work with the people I didn’t like.”

Black and the others combed through more than two decades’ worth of musical posters in their research and developed a color scheme they thought would blend the images appropriately.

They used an overhead projector to sketch the images on the brick wall and “mixed a lot of paint,” said Deal, who will consider a career in the arts while she attends the University of Wisconsin-Platteville Baraboo Sauk County in the fall.

“I just wanted to be part of something,” Deal said.

Said Meierdirk: “We’re like this big family of theater nerds, and I think this project is just a way to be remembered. It’s also a way to remember those who came before you, and I think that’s really cool.”

Black and Meierdirk vowed to add next year’s musical to the collage and will also train other students for the project to continue indefinitely.

“It’ll be much easier for them,” Deal said.

AJ DeSomer had his reasons for playing “Don’t Stop Me Now” by Queen for his classmates Thursday night at Portage High School.

'Nothing stays the same': Final play at Pardeeville Elementary set for this weekend

LODI — It took Jeff Joutras almost 30 years to deal with the death of his father.

It’s not too late for Portage youth to enroll in summer theater programming.

MADISON — Portage High School students took their place in the spotlight June 9 during the Jerry Awards ceremony at the Overture Center in Madison.

'Good for the soul': New seasons begin at Portage Center for the Arts

Making time for the arts is probably easier than most people think.

From left, Portage High School students Anna Marie Davidson, Aidan Black, Avery Meierdirk and Alex Deal look Tuesday at their completed painting project that honors all of their school's musicals since the school opened in 1997.

One of two auditorium entrances at Portage High School that's decorated with paintings honoring all of the school's musicals since the school opened in 1997.