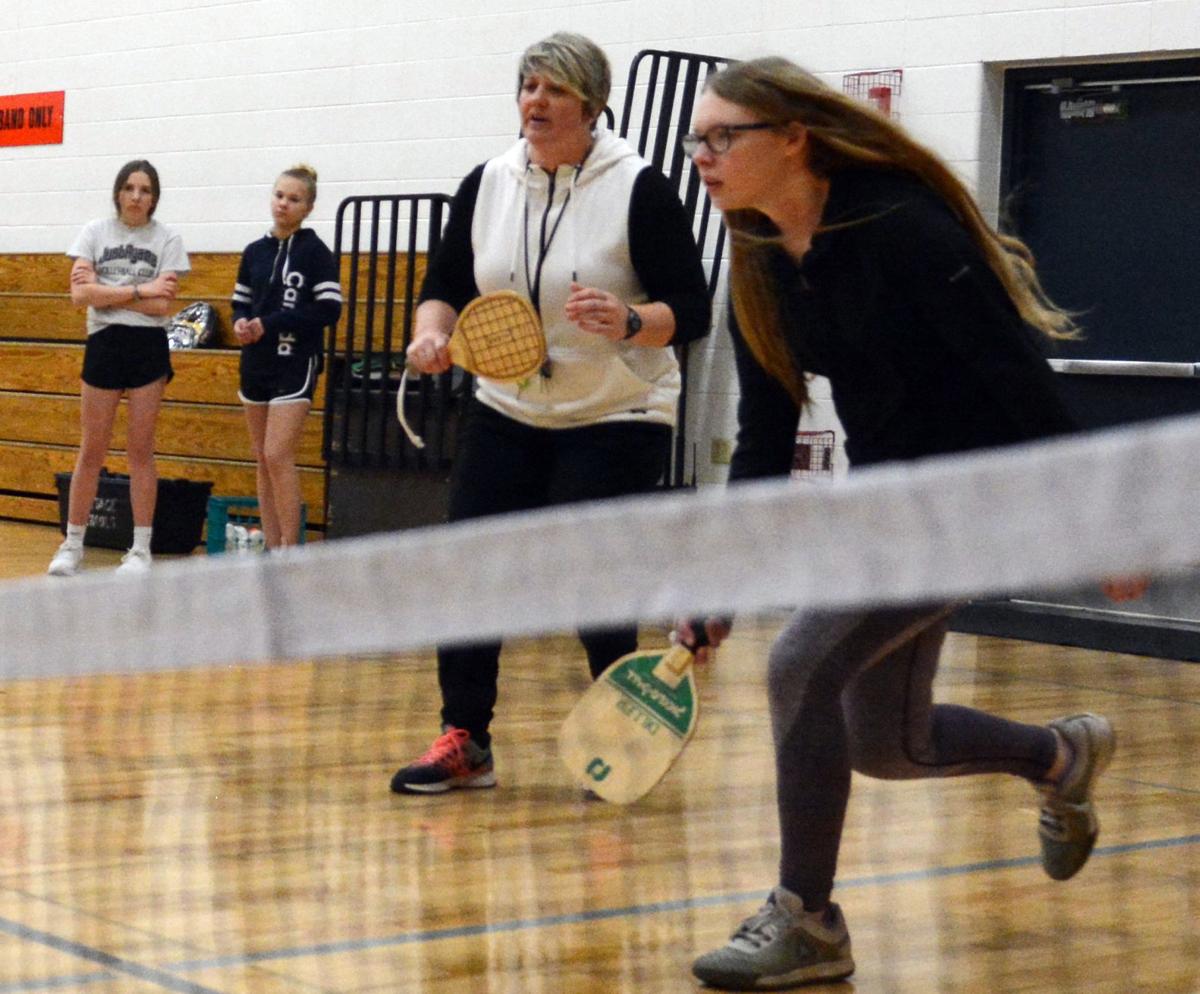 Sophomore Alexis Marks runs for the ball while demonstrating a game of pickleball with physical education teacher Jessica Howe while the rest of the class watches Thursday morning at Portage High School. The state education department named Howe an Educator of Promise last week. 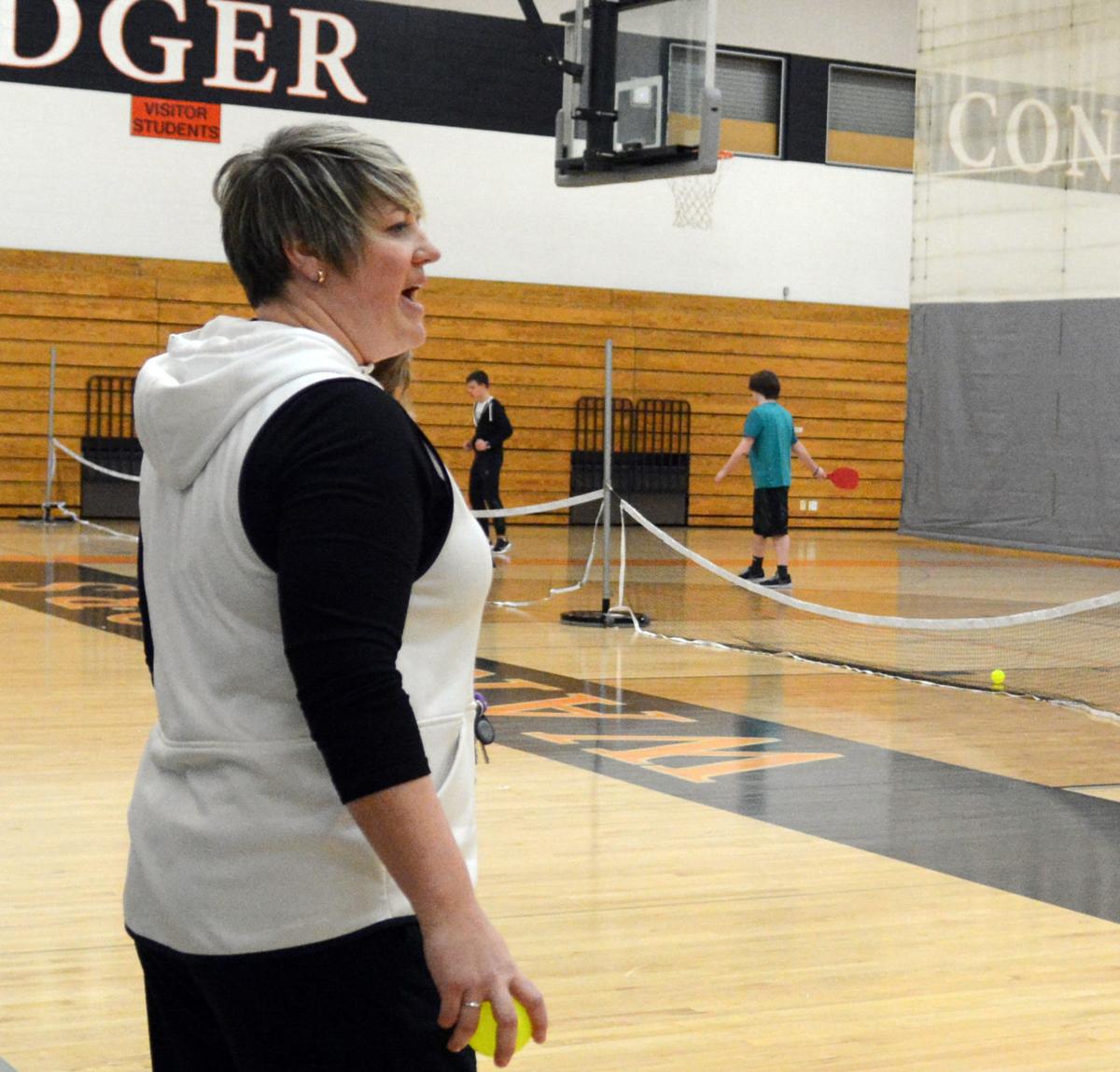 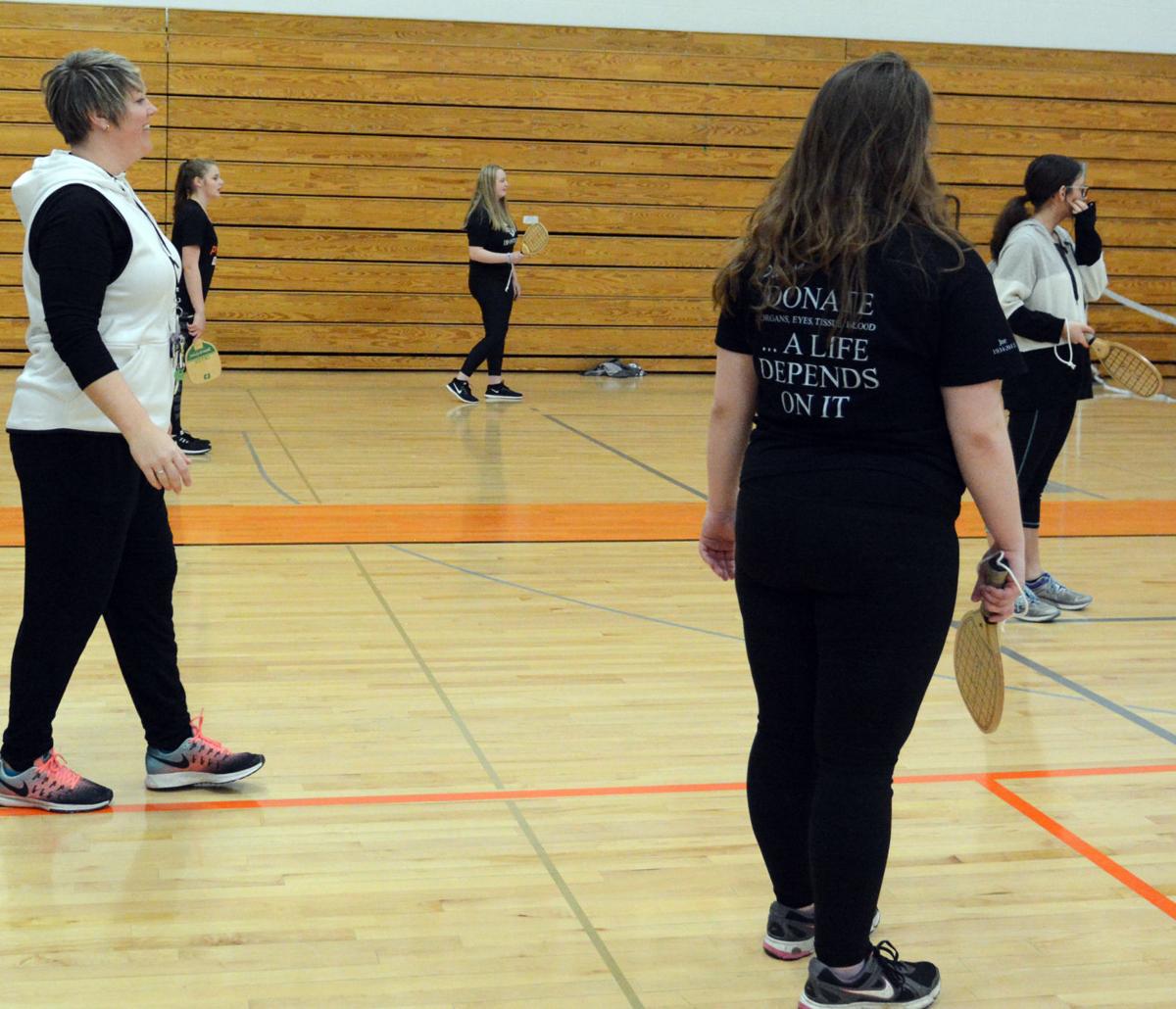 Jessica Howe has been an educator for 17 years, the last six in the Portage school district, but she’s still an Educator of Promise.

The Wisconsin Department of Public Instruction announced the honor Wednesday for 60 public educators chosen for their leadership potential, including the Portage High School physical education teacher. Through teaching, coaching varsity basketball and participating in other groups, Howe said she plays a leadership role in her daily life.

“I’m really excited and proud to represent Portage school district and the other teachers and schools in Wisconsin. It’s an honor to represent what our public schools do,” Howe said.

DPI Education Consultant Mark Mueller said this is the program’s first year as Educators of Promise, though it has existed in a smaller form as the Educator Leadership Rendezvous, where organizers looked through the state Teachers of the Year for promising educators early in their careers and invited them to attend a three-day leadership retreat. This is the first year teachers and administrators from across the state could apply to the program, bringing in a broader pool, he said.

Organized in collaboration with the Wisconsin Army National Guard and the Wisconsin Association for Middle Level Education, this year’s recipients get to attend the 2020 Wisconsin Educator Leadership Rendezvous in July at Fort McCoy. Teachers will be put into squads with a National Guard recruiter serving as squad leaders. Mueller said they do hands-on activities and seminars.

In addition to building leadership skills from multiple lenses, Mueller said the goal of the retreat is to break down stereotypes between education and the military, such as who makes a good candidate for military service and what that service is like.

Over the last couple of years, “both groups of people start out kind of like a middle school dance, where they’re a little bit separate … but then they start these conversations and these collaborations and by the end of these three days, they’ve come to realize that they’re jobs are incredibly similar, that they’re all catering to the same kind of complex student and human needs that exist within our schools and our communities,” Mueller said.

Howe participated in the rendezvous last year and said she was excited with the opportunity to go again when the program opened to applicants.

“I really wanted the opportunity to go to this event,” she said. “The people that are there are fantastic. The challenges are really unique, and I knew it was going to help me grow in a lot of different areas.”

At last year’s event, she said she felt “thrown into” the military experience, which she had never had before. Participants slept in barracks, ate rations and had to quickly figure out how to be successful with teamwork, she said.

“It kind of simplifies some things in your life by really being immersed in this lifestyle that you don’t normally have,” she said, adding that she rode in a helicopter, climbed, rappelled and played paintball last year. “Really cool experiences with really intelligent, motivated people.”

Howe said she brought what she learned at the rendezvous last year back to her work in Portage, including the knowledge that the Wisconsin National Guard has equipment that schools can borrow to give their students experiences they wouldn’t otherwise have.

Selected to serve as an assistant squad leader this year, Howe will help participants find their roles on the squad, work together and stay positive despite challenges, she said.

She thanked the Wisconsin National Guard for providing the opportunity, adding that the collaboration with DPI is “pretty awesome.”

Mueller said Maj. Jeremy Duffy, the battalion commander for the Wisconsin Army National Guard Recruiting and Retention Battalion, is a former PHS teacher and will also be attending the rendezvous.

UPDATED: Evers orders all Columbia County and Wisconsin schools to close by Wednesday

MADISON — Gov. Tony Evers on Friday ordered all of Wisconsin’s K-12 schools to be closed by next week in the hopes of slowing the spread of th…

Students from Bartels Middle School in Portage will showcase, during march, the artwork that helped them to relax.

Weekend snacks are now available to students in every school in the Portage Community School District, but that shouldn’t mean the program wil…

Paris Pinney planned to give up her seat on the bus home from school Tuesday.

Sophomore Alexis Marks runs for the ball while demonstrating a game of pickleball with physical education teacher Jessica Howe while the rest of the class watches Thursday morning at Portage High School. The state education department named Howe an Educator of Promise last week.