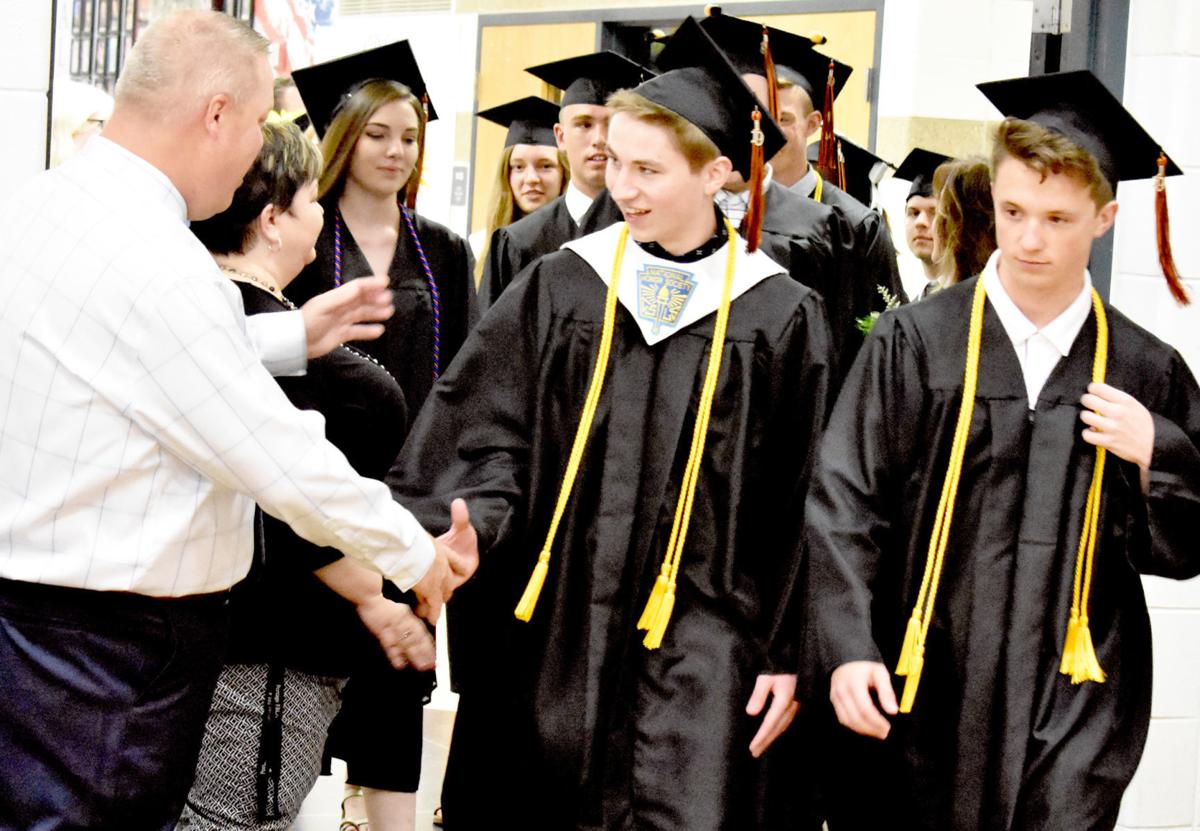 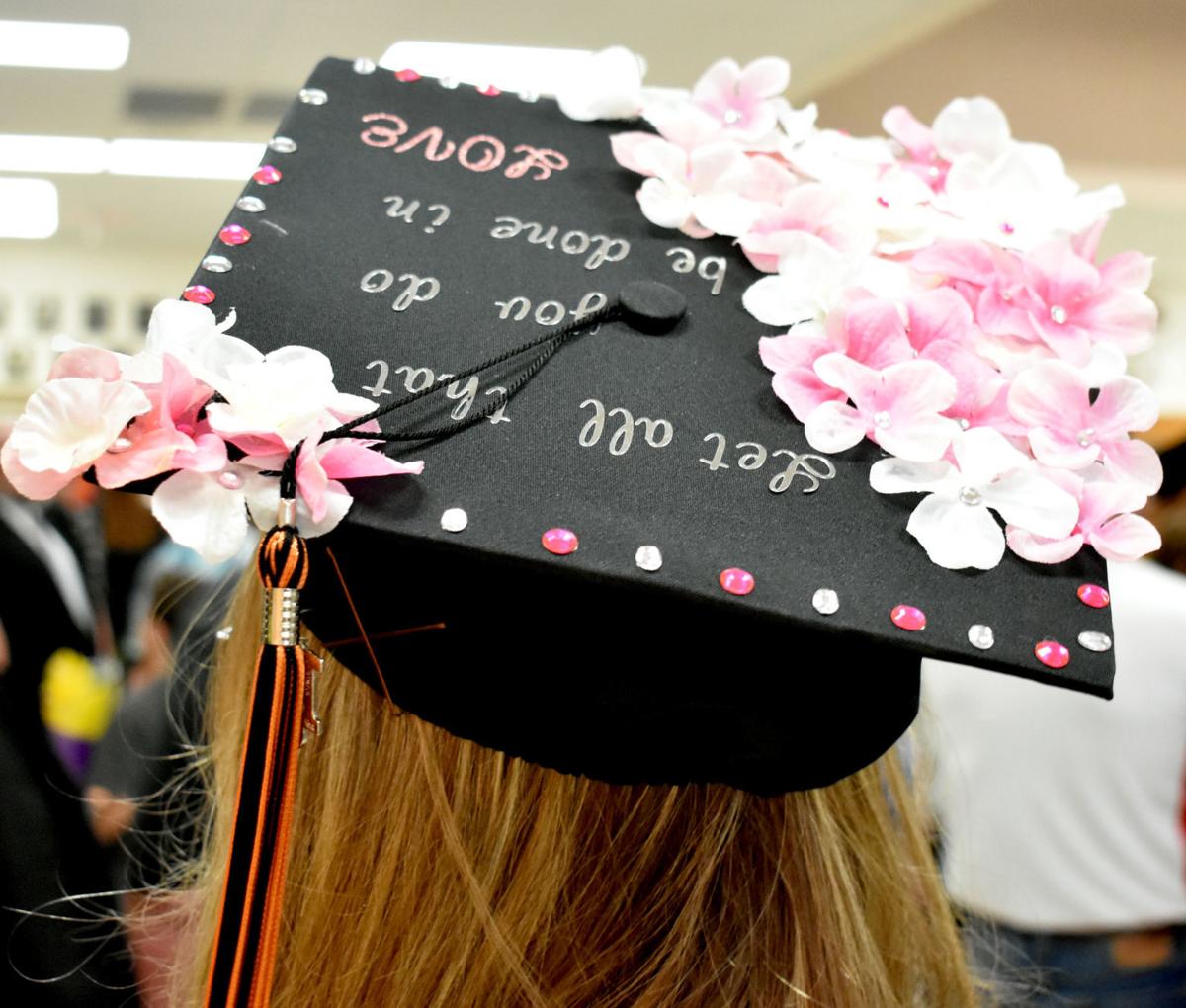 Stasya Lurvey -- whose hat says, "Let all that you do be done in love" -- looks toward her graduating peers in the commons area of Portage High School before the graduation ceremony Friday. 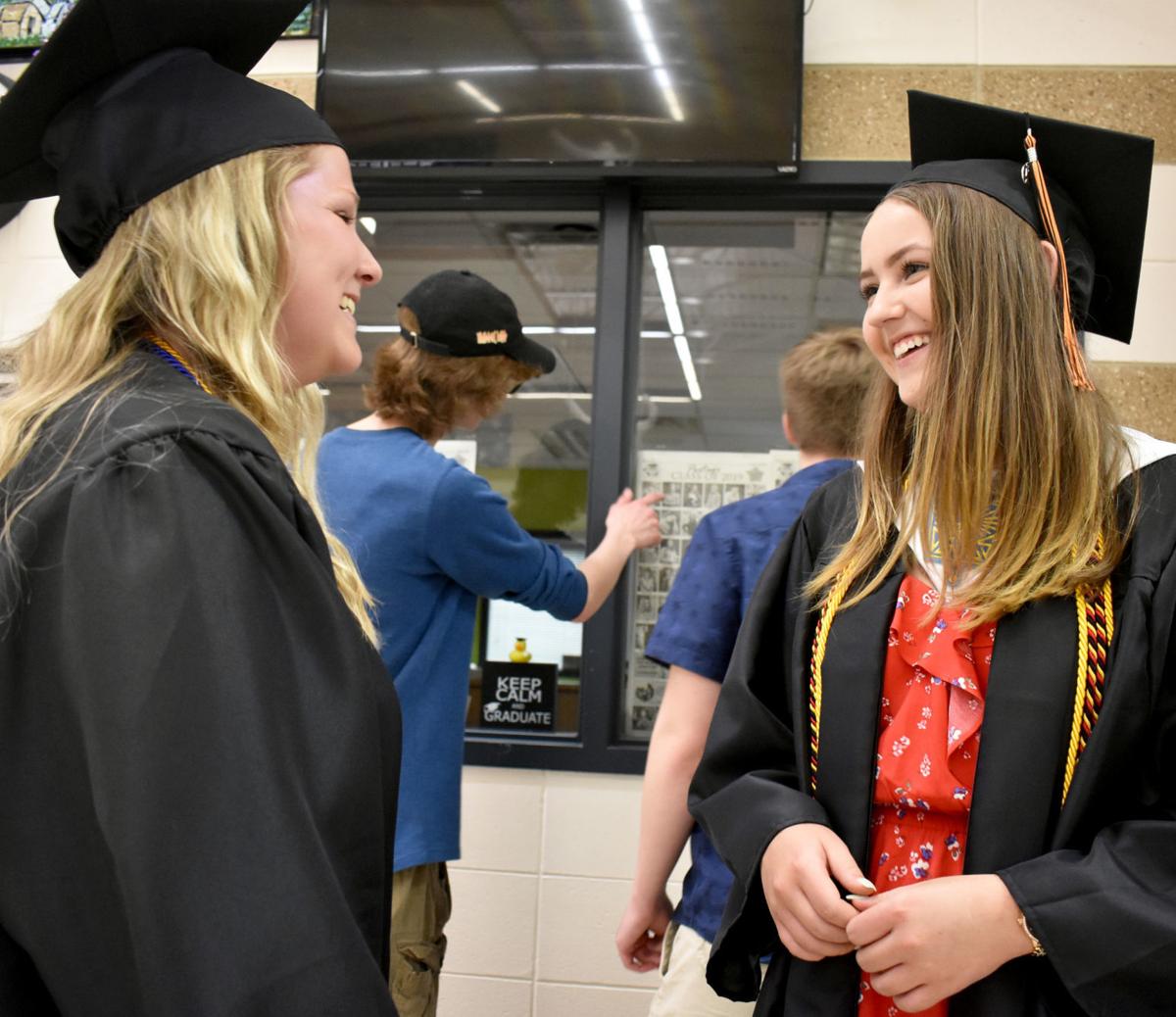 Allisyn Weishoff and Emily McReath laughed about their adventures in kindergarten as they waited for the graduation ceremony to start Friday at Portage High School.

They had once hunted for leprechauns at St. John’s Lutheran School.

“We truly believed they were real and we used Lucky Charms as bait,” said McReath, one of 177 graduates of PHS. “You never forget where you started.”

In a nearby hallway, Austin Murray thought about all of the friends he’d made during his 13 years of school. He’ll keep at least five of them for life, he said, including the ones he’d started a rock band with as sophomores.

Never mind this band only lasted a week.

“All we did was argue about our name and we never picked one,” Murray said. “It was great.”

During their teacher’s transitions, they said, Schmitz would flip his marker from one hand to the other.

“And he dropped it a lot,” Kastenholz said. “Sometimes he’d hit himself in the face.”

Schmitz, in his 32nd year of teaching, was standing about 10 feet from Kastenholz and Kollath.

“It’s not as easy as it looks,” he said. “They found this out whenever they tried to do it.”

Graduate Stasya Lurvey used the word “adventurous” to define the Class of 2019. Not only is her class unafraid to try new things, she said, it’s one that tries to get everyone involved.

“When we held our senior picnic last week,” she said, “everybody was there. Everybody. We’re just a very loving and energetic class.”

Principal Robin Kvalo said “school spirit” is one of the best ways to describe the class of 2019 — her final one as she approaches her retirement June 28.

“They’re quite proud of the ‘spirit sticks’ they won in back-to-back years,” Kvalo said of the Homecoming prize that had rewarded their school spirit in a series of activities.

The class won these prizes as juniors and seniors and, Murray explained, they also raised “three times as much money” as the other classes during the Homecoming coin drive for charity.

Kvalo led the high school for eight years and had once served as the elementary principal for many of Friday’s graduates during her 25 years in education in Portage.

“I’m trying not to think about it too much right now because I know I’ll get emotional,” Kvalo said prior to the start of the ceremony. “They’re academically strong and very diverse.

“I’ve had a great career, and this is a great way to cap off.”

When Kvalo addressed her graduates in Friday’s ceremony, she shared the same quote, one she attributed to Confucius, that she read to her students during her announcements at the start of this school year: “Choose a job you love, and you’ll never work a day in your life.”

She said this is how she feels about her own career in education and she encouraged the graduates to also pursue their dreams.

“Have fun on this journey we call life,” Kvalo said. “Be kind and be passionate about all you do.”

20-plus years of musicals honored at Portage High School

It might be hard to imagine anyone’s to-do list looking similar to Thomas Huang’s in his final week in Portage.

Photographers Katie Seiler and Brieana Pulver thought of their clients when they named their business Solas and Kin Photography.

Stasya Lurvey -- whose hat says, "Let all that you do be done in love" -- looks toward her graduating peers in the commons area of Portage High School before the graduation ceremony Friday.