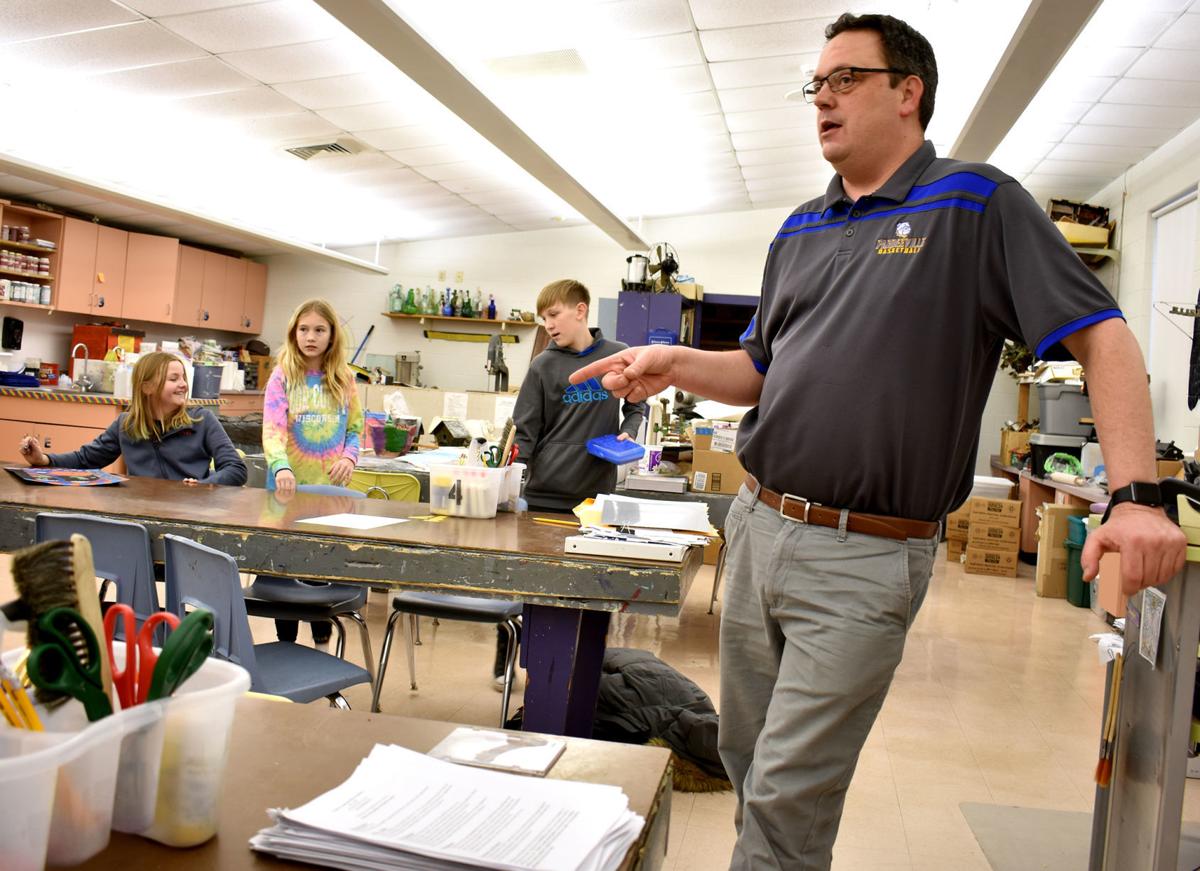 Pardeeville middle and high school art teacher Chris Lynch addresses his middle-school classroom in January 2018. The two schools will shift to a trimester schedule this year. 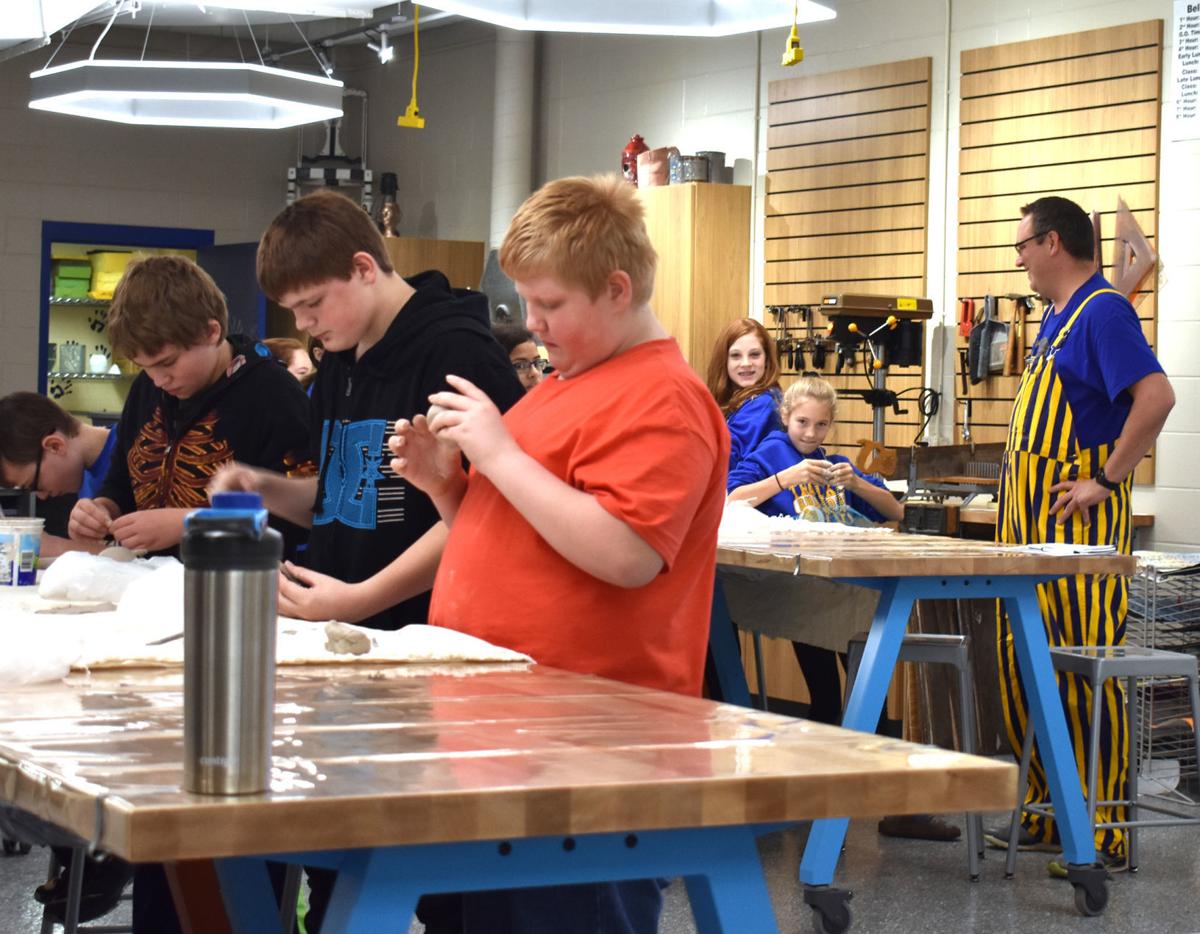 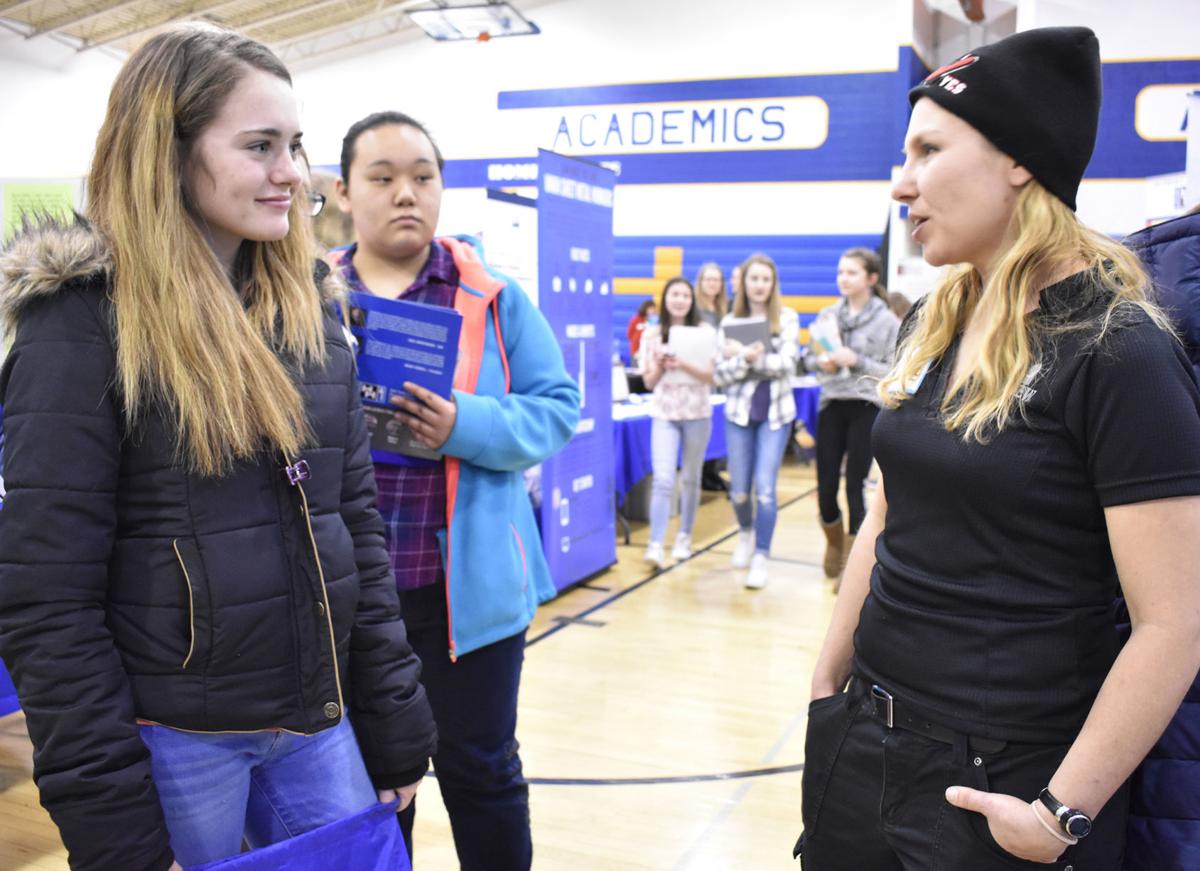 In February 2018, then-junior Alexis Hawley listens to Jackie Maier of Electricians Local 159 during a career fair at Pardeeville High School. The high school and middle school will start a trimester schedule this year.

PARDEEVILLE — When Pardeeville students enter the halls of the middle and high school next week to kick off the year, they also will pioneer a new six-period trimester schedule.

“Our students have been overly stressed with an eight-period day and all the homework that goes along with it, and I think our teachers have felt some of that stress also,” Pardeeville School Board President Margo Pufahl said earlier this year.

Lengthening class time from almost 45 minutes to 60 minutes and decreasing the number from eight to six “lightens the burden for both of them,” she said.

Both middle school and high school students will be affected by the change, which starts on their first day of school: Sept. 4 for all but ninth-graders, who start Sept. 3.

Originally led by Paul Weber, the former high school principal, the schedule change was approved by the Pardeeville School Board in January. He said students struggle with too many classes and too many of them are failing, according to April 1 school board meeting minutes.

District Superintendent Gus Knitt pointed to graduation speeches given by the district’s top students over the last three years, where they spoke about the stress and anxiety they felt over trying to get everything done at a high achievement level.

“That was eye-opening as I sat there on stage at graduation to listen to these valedictorians talk about the stress and pressure that they felt from having to take all these different classes and the amount of time that they had to put in,” Knitt said, noting that many of them are involved in athletics and other extracurriculars.

Many students can’t put in the hours of homework or study time after school they need to be successful, he said. If they don’t complete their homework, teachers don’t know if they understand the material.

By adding roughly 15 minutes to each period, Knitt said they will have class time to start on homework, allowing teachers to see where students are struggling. He said the school day is one minute longer than last year.

Crystal Huset, high school counselor, said she thinks the change will be beneficial and allow students to “give 100%.”

“I think the goal is to help students have less to focus on at one time, allowing them to delve deeper into the topics that they’re studying instead of just, hopefully, trying to get through things,” she said.

Twelve members of the public and one school board member spoke at the March 18 Pardeeville School Board meeting to express concerns about the new trimester schedule, such as students not getting the classes they need or want to take.

Knitt said most of those problems have been resolved, thanks to parents and students vocalizing their concerns so district staff could try to work them out.

He said Huset sat down with students last year to talk about this year’s scheduling. Teachers and other staff have prepared for the shift with staff development days, and they’ll be able to meet with each other on early release days to discuss how the transition is going, Knitt said.

With some middle school class periods already extended, he said the schedule change won’t affect Pardeeville Middle School as much as the high school.

Knitt noted trimesters won’t solve all of the problems students face, but “we have to try something different and see if it’s working better for our students.”

While considering the shift, district staff contacted other comparable schools in Wisconsin that have made the same change, using Chetek as a model. According to the April 1 meeting minutes, Huset reported that all 30 schools felt “very strongly” that six-period trimesters were working.

Chetek school employees and students liked the change once they got used to it, and student achievement improved, Knitt said, noting the district switched to trimesters about 10 years ago. In May, four Pardeeville staff members visited the northwestern Wisconsin district as part of the transition process.

“We’re going to have to wait and find that out on our own and see if that is true here in Pardeeville,” he said.

He said the school board will be updated periodically on the transition. If school leaders don’t see positive results, they may look at returning the schedule to quarters and changing something else instead.

Not even a year since hiring a new Pardeeville High School principal, district leaders are opening the search again after Paul Weber resigned …

Pardeeville Elementary School Principal Mary Kamrath doubled down on her nickname of “the book fairy” this summer when she started riding her bike around the community to give free books away to every child she sees. So far, she's given out more than 1,000.

PARDEEVILLE — For the more than 200 Pardeeville students participating in Youth Frontiers, the very best activity occurred at the end of the program.

PARDEEVILLE — Opened just this spring, Pardeeville’s new auditorium already is providing students with space to spread their wings — as instru…

Teams learn from each other at Portage cheer camp

Pardeeville middle and high school art teacher Chris Lynch addresses his middle-school classroom in January 2018. The two schools will shift to a trimester schedule this year.

In February 2018, then-junior Alexis Hawley listens to Jackie Maier of Electricians Local 159 during a career fair at Pardeeville High School. The high school and middle school will start a trimester schedule this year.