Gov. Evers signs bill in Portage honoring soldier who lost life in Somalia in 1993
0 comments
Share this
{{featured_button_text}}
1 of 5 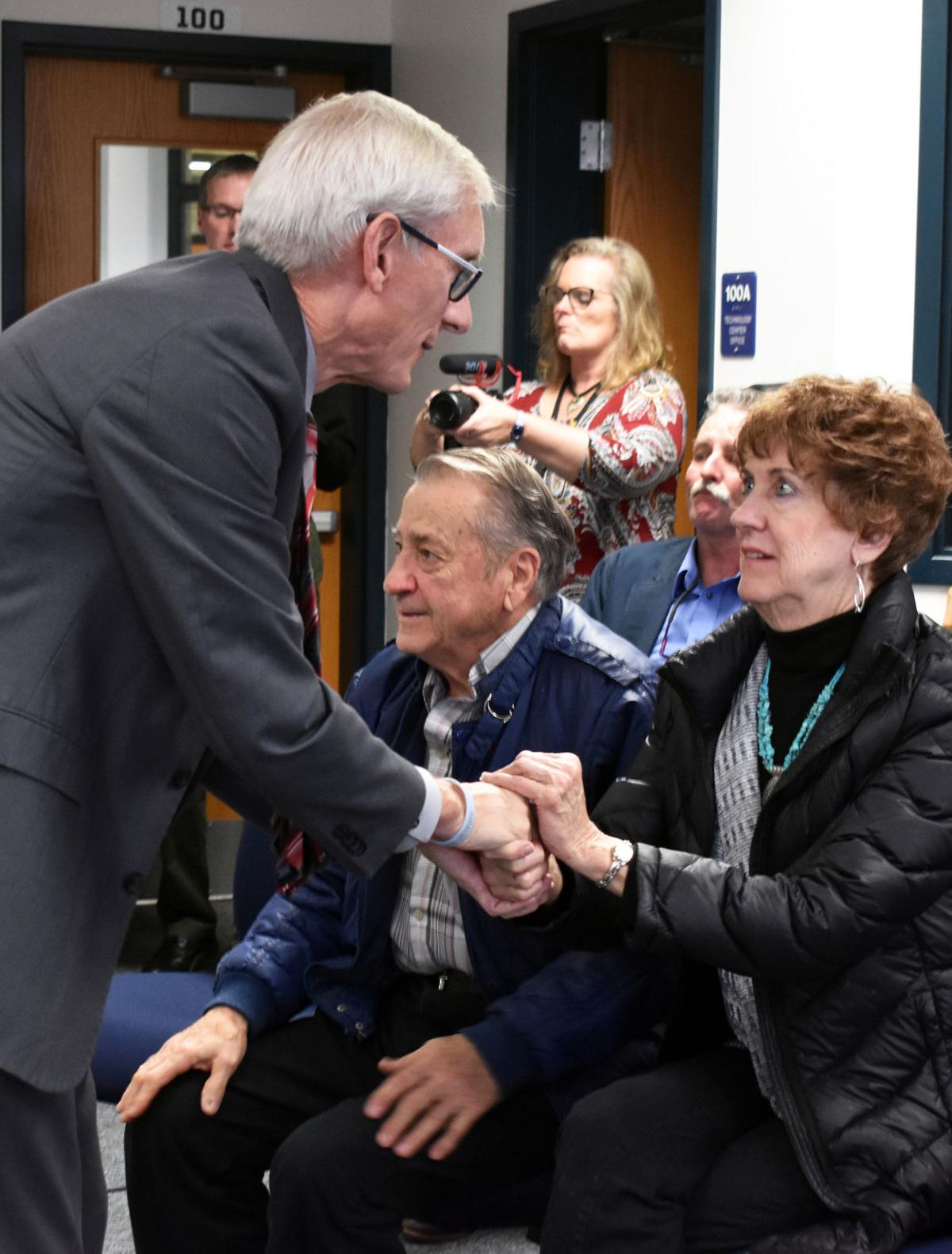 Gov. Tony Evers shakes hands with Ginny Johnson, the mother of the late soldier Daniel Busch, for whom Evers signed a bill Tuesday at Portage High School that designates a 10-mile stretch of Highway 33 as the Staff Sergeant Daniel D. Busch Memorial Highway. 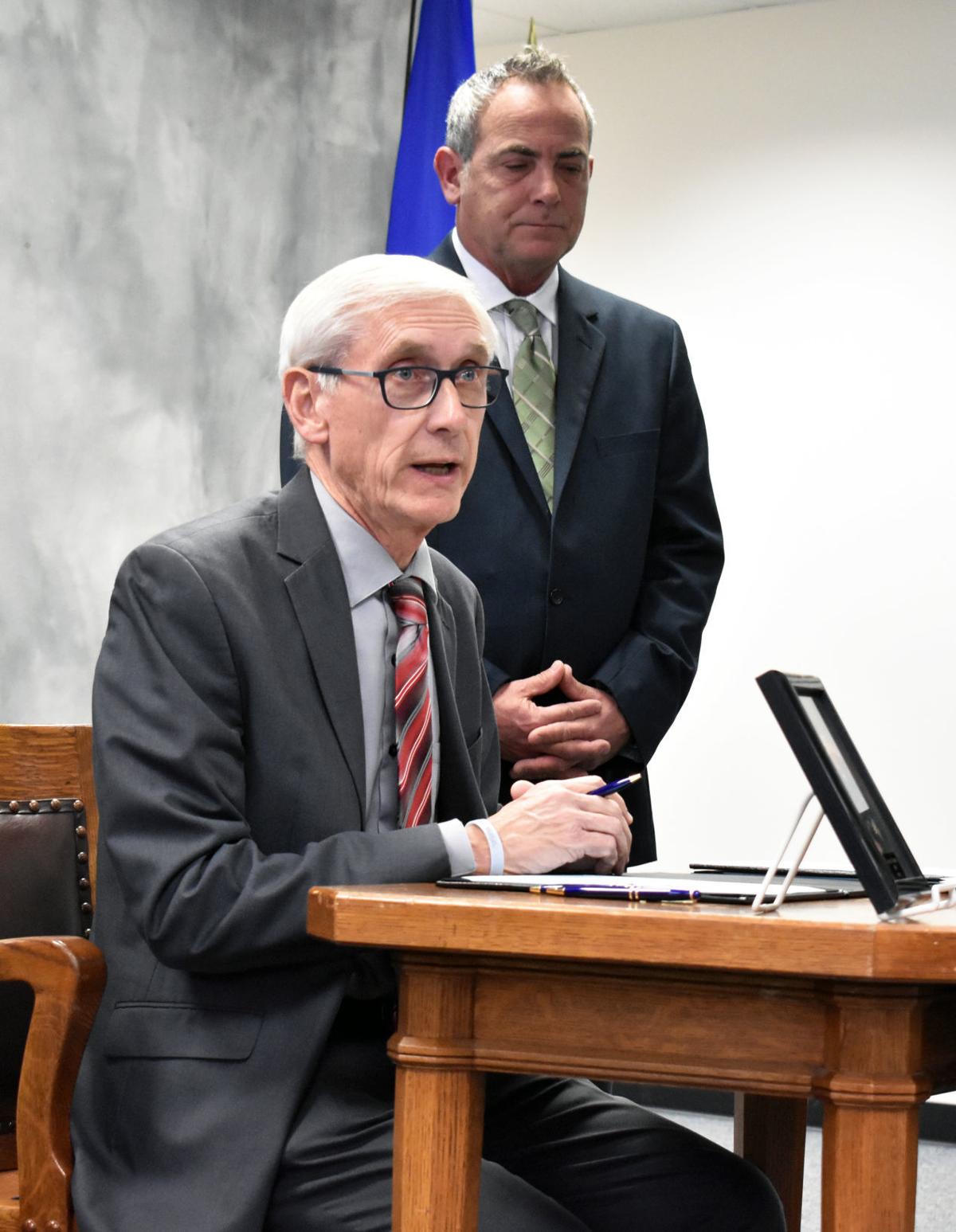 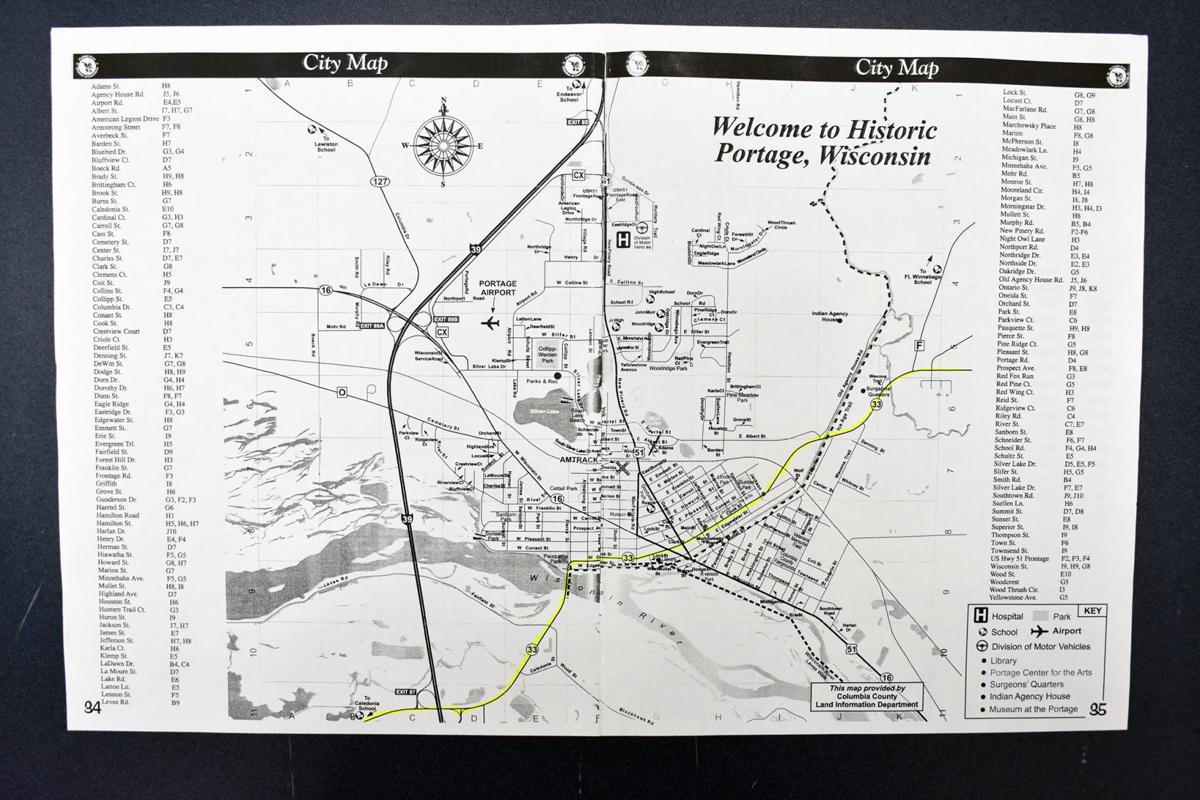 A yellow highlighter marks the 10-mile stretch of Highway 33 that has been named the Staff Sergeant Daniel D. Busch Memorial Highway after Gov. Tony Evers signed a bill Tuesday at Portage High School. 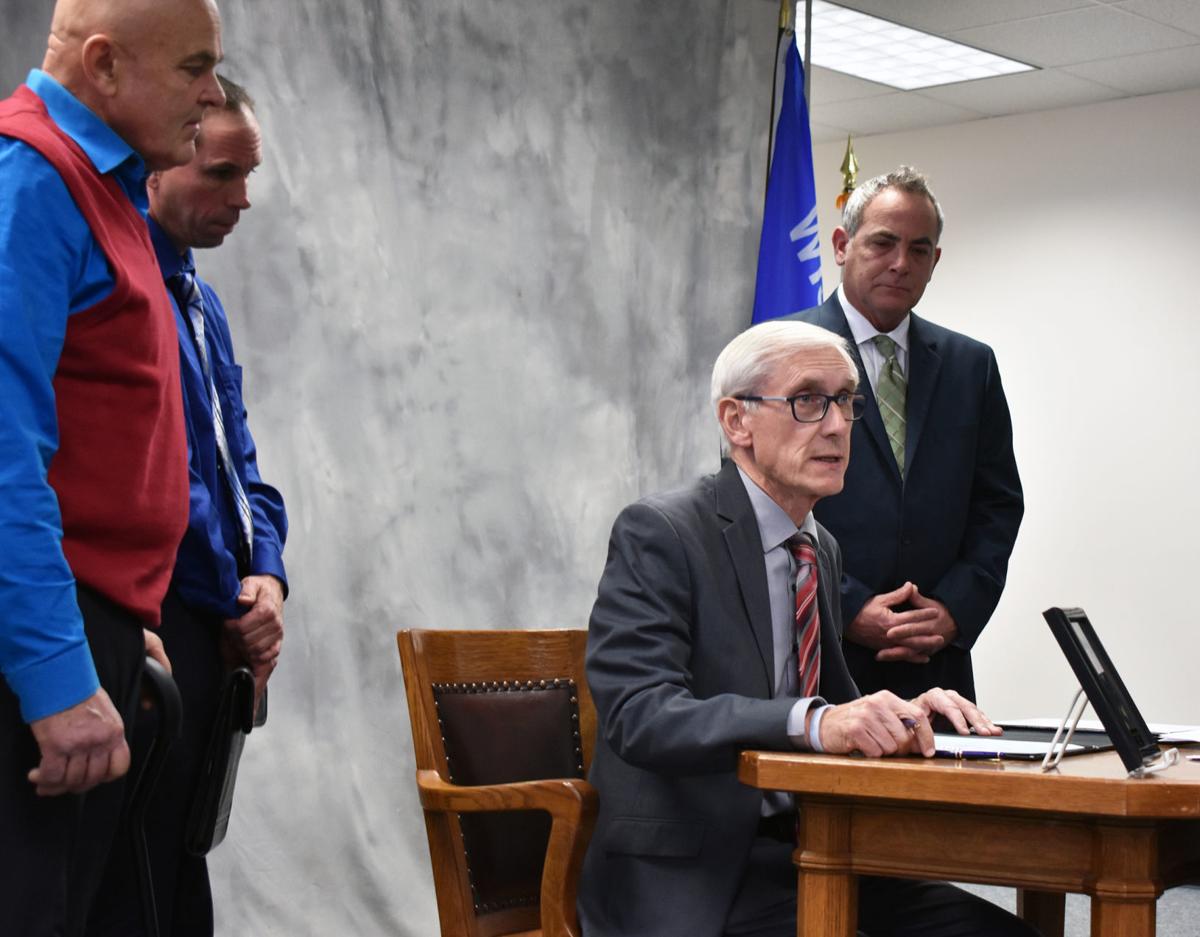 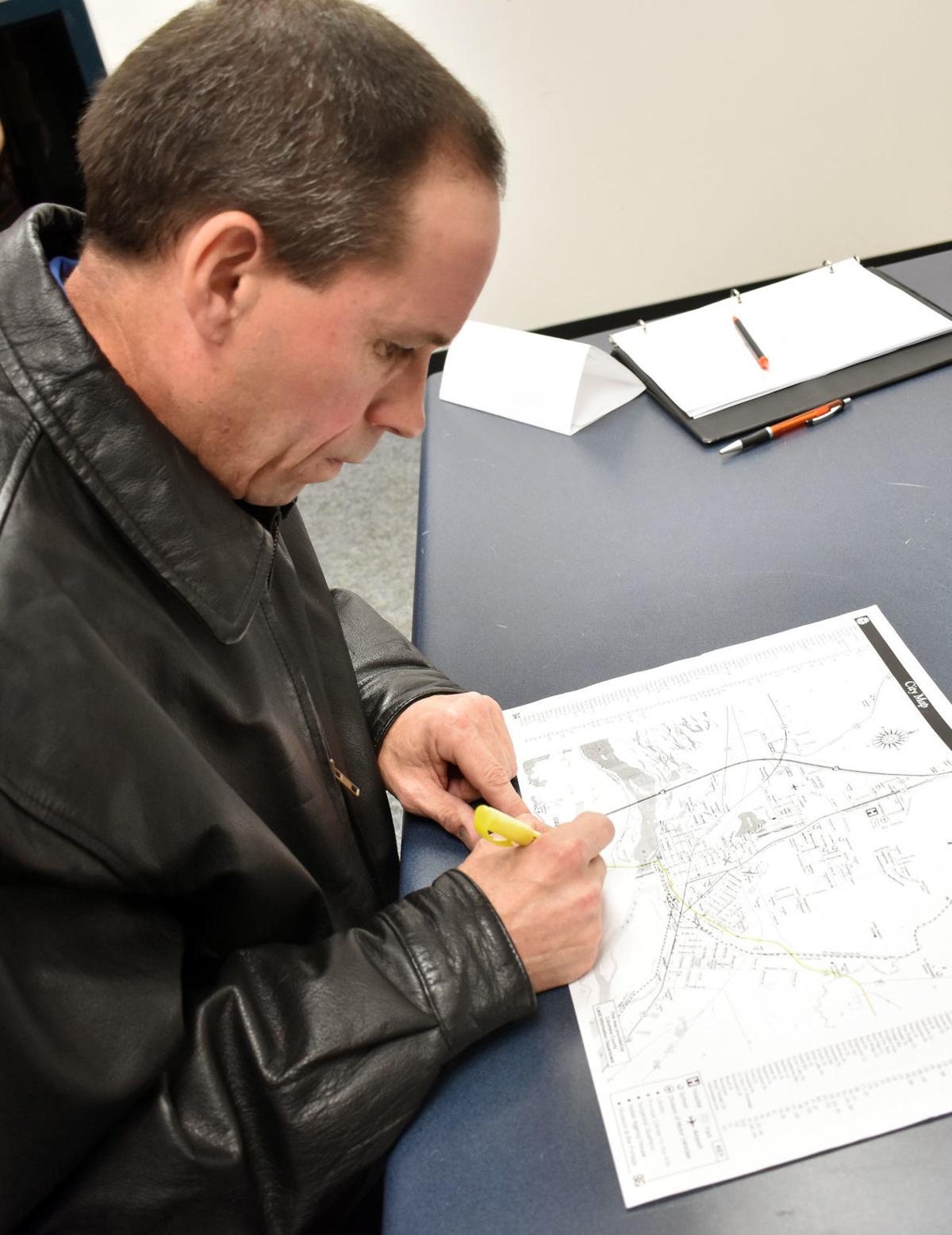 Brian Wheeler uses a highlighter to mark the 10-mile stretch of Highway 33 that is now the Staff Sergeant Daniel D. Busch Memorial Highway after Gov. Tony Evers signed a bill Tuesday at Portage High School. Wheeler is a cousin of Busch and has worked for many years to achieve recognition for Busch.

“This ensures his legacy lives on in his own community,” Evers told an audience that included Busch’s family and friends, local legislators and about 60 students and staff members from the school. Prior to signing it, Evers vetoed Assembly Bill 249 that sought limitations for honoring Wisconsinites with a state highway or bridge.

“There was never anything on my mind that would have prevented me from signing this,” Evers said of Assembly Bill 77, his 23rd act as governor. “There was no hesitation.”

Staff Sergeant Daniel D. Busch Memorial Highway begins at the eastern city limits of Portage and proceeds west until it reaches the Columbia-Sauk county line, in tribute to the 1986 Portage High School graduate who was fatally wounded in the Battle of Mogadishu in Somalia in 1993.

The signing took mere seconds compared with the 20 years Brian Wheeler sought recognition for his cousin’s military accomplishments. “It’s hard to take in, and I don’t know if it’s really hit me yet,” Wheeler said of the highway bill, which passed the state Assembly in June and the state Senate earlier this month. “It’s exciting and it’s something that personally I never thought would happen.

“I think it’s great for Dan and his legacy.”

Beginning in the early 2000s, Wheeler, of Pardeeville, honored Busch at every opportunity on social media, including on military holidays, the anniversary of Busch’s birth date of July 30, 1968, and the date of his death, Oct. 3, 1993. But he always wanted something bigger than that, Wheeler explained, and with help from since-retired Columbia County Veterans Service Officer Richard Hasse, Rep. Dave Considine, D-Baraboo, State Sen. Jon Erpenbach, D-Middleton, and many others, the memorial highway accomplishes that goal.

“I’m just so proud this project has come to a meaningful outcome — an appropriate outcome in recognition of Dan’s contributions and sacrifices that we should all be proud of on a daily basis,” said Hasse.

Busch decided in high school that he wanted to serve in the U.S. Army Special Forces, after which he joined the Delta Force, Wheeler said. Busch posthumously received a Purple Heart and Silver Star for his role in defending his crew of a downed helicopter called Super 6-1, part of a series of events that were depicted in the 2001 film “Black Hawk Down.”

“Danny was remembered not because he was my son, but because of the type of person he was,” said his mother, Ginny Johnson. “He was well-liked by everybody – our whole family loved him. He was just an outgoing, friendly guy and a strong Christian who would help anybody.”

Hasse became familiar with Busch’s military service record when he started digitizing more than 15,000 veterans’ records for the county in 2012 and would later pursue, along with Wheeler, the Medal of Honor for Busch. Republican U.S. Sen. Ron Johnson’s office conducted research into the matter, but said recently it could not find a unanimous conclusion among military to provide the Medal of Honor for Busch.

Those who served with Busch have told Wheeler, in no uncertain terms, that he deserves the Medal of Honor – “that without his actions, five crew members wouldn’t have survived,” Wheeler said. Wheeler and Hasse will now consider taking the matter to Democratic U.S. Sen. Tammy Baldwin’s office, Hasse said.

Considine began collecting co-sponsors for the highway legislation in February. Along Highway 33 is Welsh Cemetery, where Busch is buried and where Wheeler, Hasse and Considine hope to eventually see historical signage that explains what Busch accomplished in his military service.

“Once people heard the story and knew what was happening, my colleagues on both sides of the aisle thought this was the right thing to do,” said Considine, whose family has owned farmland in Caledonia since the 1960s. Considine still attends the same church as Busch did: Caledonia Presbyterian Church. Friendships were formed through the years between members of the two families, including between Busch and Considine’s brother, Tom Considine.

“After the committee hearings people were asking me where they can donate to this cause,” Considine said of the bipartisan process. “Building consensus on this bill was kind of a slam dunk.”

The Busch legislation requires that no state funds will be used for the erection or maintenance of highway markers, which is why Wheeler started a GoFundMe page for them as well as for the historical signage at Welsh Cemetery. (Search: “SSG Daniel Busch Memorial Highway” on Gofundme.com.)

Wheeler’s fundraiser has received about $6,000 of its $20,000 goal, which he says was enough money to order the signs and that he expects the county to install them as soon it receives them.

PHS Principal Joshua Sween said the governor’s visit to the school and the passage of the memorial highway bill should make a profound impact on his students. “It’s a big deal for the school because we care a lot about veterans.” Sween pointed out the school’s own memorial for Busch and its annual Veterans Day ceremonies that draw hundreds from the community every year.

He added, “It’s a big deal for me, being a veteran myself, and for this community, to see that the government takes a look at these accomplishments and cares about what our military members do for everybody.”

Sween — a member of the Wisconsin Air National Guard who did two tours in Iraq as a member of the U.S. military — said the governor’s visit likely made the biggest impression on the 15 juniors who just completed their military aptitude test. “They see a military career as a viable option for their future, both for a better life and to serve their community.”

Evers said he hopes Portage students see the significance of the bill’s passage on two levels: The first is “seeing how the sausage is made in the capital, and how difficult it is to pass bills and how people have to persevere” to accomplish their goals. “And I think they see how a community rallies to preserve the memory of a local hero, recognizing that this is important for Portage but also the state of Wisconsin at large.”

Rhonda Nass employs pictures and words in her pursuit of spiritual intimacy.

'An eye for it': Portage photographer captures Wisconsin beauty in new exhibit

People often forget how beautiful their home state is, but Larry Holak is not among them.

'The Beating Heart,' a student-led theater production, not for the squeamish at Portage High School

Expect suspense, surprises and a bit of horror in the next dramatic production at Portage High School.

Patrons of Portage Public Library will benefit from more than just reopened spaces after an upgrade to the fire sprinkler system.

In the eyes of Amy Jo Fisher, the free Thanksgiving Day dinner at St. Mary’s School runs like a “well-oiled machine.”

Though he later thought better of it, Bryce Brancel’s first reaction to shaking the hand of Wisconsin’s governor was “I’m never washing that h…

Portage High School Principal Joshua Sween will succeed Margaret Rudolph as the district administrator in Portage when she retires June 30.

Gov. Tony Evers shakes hands with Ginny Johnson, the mother of the late soldier Daniel Busch, for whom Evers signed a bill Tuesday at Portage High School that designates a 10-mile stretch of Highway 33 as the Staff Sergeant Daniel D. Busch Memorial Highway.

A yellow highlighter marks the 10-mile stretch of Highway 33 that has been named the Staff Sergeant Daniel D. Busch Memorial Highway after Gov. Tony Evers signed a bill Tuesday at Portage High School.

Brian Wheeler uses a highlighter to mark the 10-mile stretch of Highway 33 that is now the Staff Sergeant Daniel D. Busch Memorial Highway after Gov. Tony Evers signed a bill Tuesday at Portage High School. Wheeler is a cousin of Busch and has worked for many years to achieve recognition for Busch.