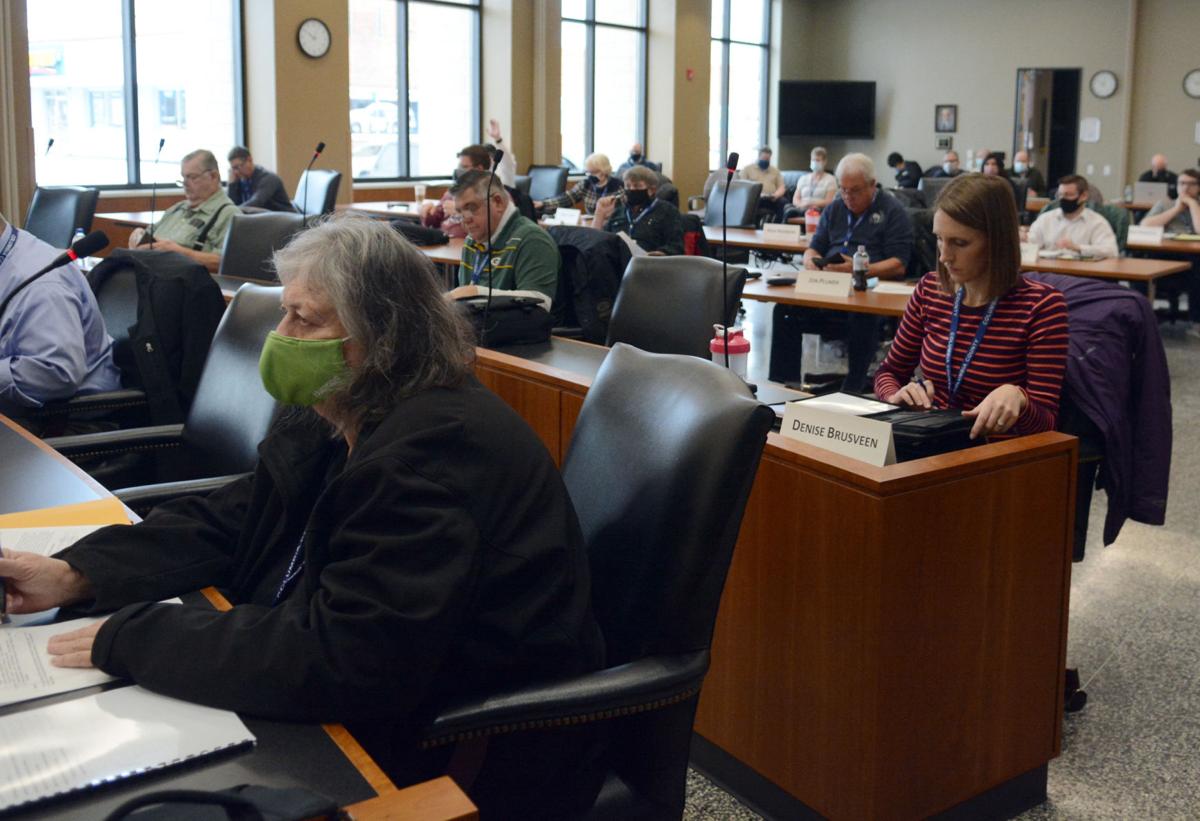 Several Columbia County Board members did not wear masks -- or wore them incorrectly -- at the Jan. 20 board meeting, including Denise Brusveen of Poynette, at right. 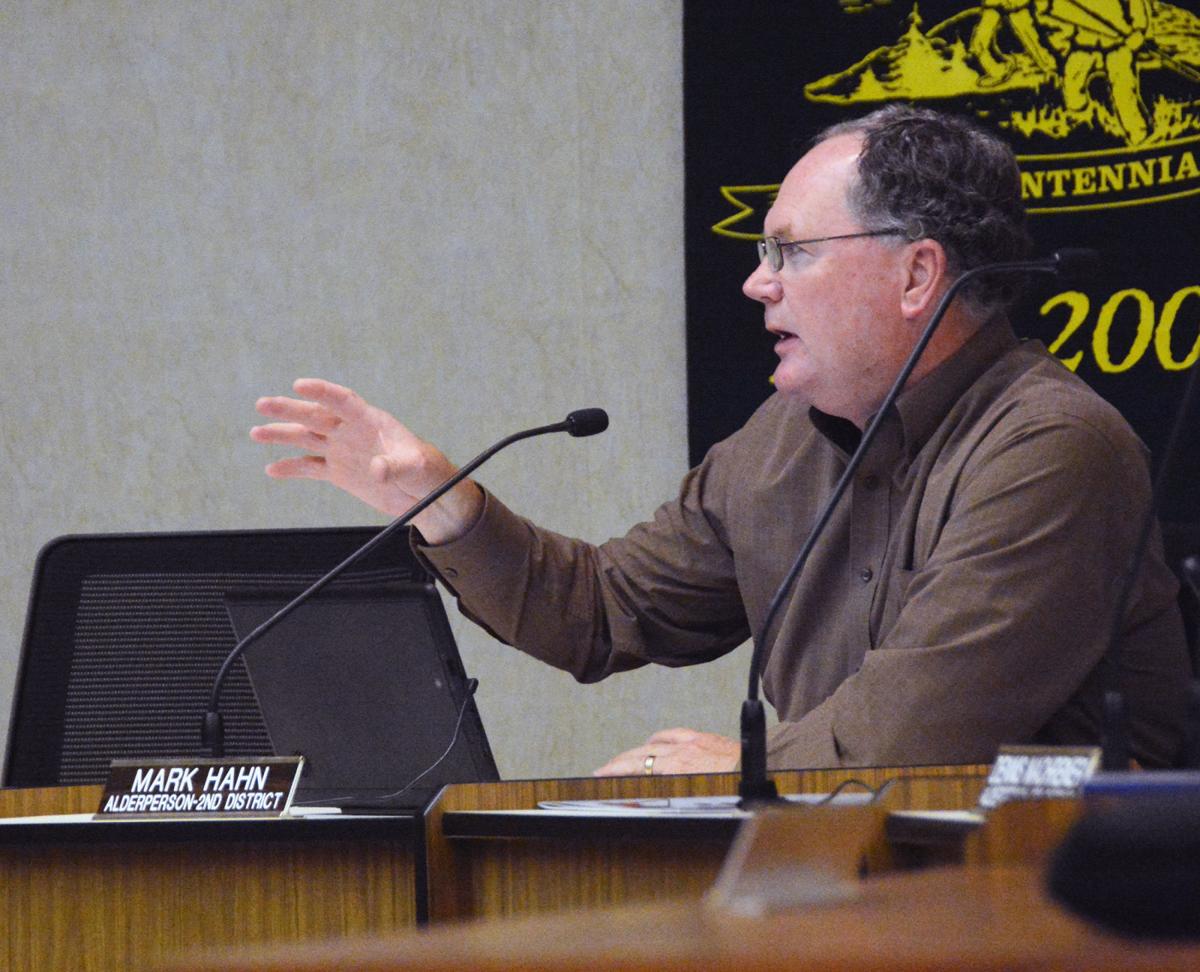 Portage Common Council member Mark Hahn questions Mayor Rick Dodd and city staff during a meeting in late April 2020. Council members have been meeting via teleconference for nearly a year.

“Disappointing, but not totally unexpected,” Murphy said. “We got a fairly good reaction at the initial meeting last week from them.”

The city requested a meeting with county officials after a spirited discussion during the Jan. 28 meeting of Portage Common Council.

Murphy said Mayor Rick Dodd, City Attorney Jesse Spankowski and himself met with about 10 county supervisors, including board Chairman Vern Gove, and Corporation Counsel Joseph Ruf. There were no county health staff present for the gathering, he said. The request for a meeting was originally made at the end of January.

“It took six weeks to schedule a meeting with Columbia County,” Murphy said, adding they met just last week and were notified within a few days of Monday’s meeting. Murphy wasn’t able to attend.

No mask mandate for Columbia Co., despite request from city of Portage

Members of the Columbia County Executive Committee unanimously agreed to reject a request for the mandate from both the city and Outagamie County, which sent out a letter to other Wisconsin counties asking them to pass mask mandates.

During the committee meeting, Supervisor James Foley was the one to propose rejecting the request. Gove, who also serves as chairman of the committee, said he believes wearing a mask during the pandemic should be a choice for the individual.

The county has never passed its own mandate, does not require face coverings in county buildings and supervisors frequently attend meetings without wearing masks. In neighboring Sauk County, roughly a dozen of the 31 supervisors similarly don’t wear face coverings. Others wear them without covering their nose and pull them down or remove them when speaking. Sauk supervisors also voted against mandating masks in August, saying they were limited in power after the state health secretary was blocked from issuing a similar order.

City council members have previously talked about possibly implementing their own mask mandate in light of the ongoing disagreement between Gov. Tony Evers and legislators.

Evers has ordered more than one mask mandate since the pandemic began to affect the state a year ago. Legislators have argued that Evers requires approval from them after 60 days. Republicans have brought a case to the Wisconsin Supreme Court challenging the most recent mandate issued in early February. The court has still not issued an opinion on the order, which expires March 20.

During a visit to Manitowoc while touring a vaccination clinic March 5, Evers said he will extend the most recent order once it expires but acknowledged that the court will “in the end have its say.”

Currently, the city is under a state of emergency via proclamations agreed upon by the council. It gives certain powers to Dodd and Murphy to make decisions regarding the city. It does not authorize them to make ordinance or legislative decisions, Murphy said. They have already ordered that the wearing of masks is required in all city buildings. If there were to be a citywide mask mandate, it would need to be approved by a vote among council members.

Murphy said the city follows guidelines from the CDC, which recommends mask wearing to prevent the spread of the virus, to maintain 6 feet of distance from others and to avoid crowds.

During the Jan. 28 council meeting, members disagreed over the use of a mask mandate. Mark Hahn said there is no proof that mask wearing prevents infection of the COVID-19 virus despite guidance from the CDC to wear masks based on a number of studies that have shown under “universal masking, new infections fell significantly.”

“I hate to say it, but I’ve always been at odds with the other members of this council,” Hahn said. “They always talk about science and masks have been worn for I don’t know how long and it hasn’t changed anything going down. I don’t know how you can say that masks help when there isn’t scientific proof.”

The idea of a citywide mask mandate was introduced by council member Dennis Nachreiner as a measure to consider if the statewide mandates are no longer permitted.

“We are on the home stretch of this pandemic,” Nachreiner said. “The science tells us that the masks work. I hate them as much as anybody hates them, but we’ve pretty much gotten the people to use them, for the most part, and it is working I believe. I just think it would be a mistake if the legislators strike down Evers’ order that we wouldn’t take a position ourselves, because what we do know is the county ain’t going to take a position.”

Council member Eric Shipmach also said he would not support a mask mandate. He and Hahn voted against extending the citywide emergency proclamation through the end of March at that time as well.

Allan Radant, Mike Charles and Jeff Monfort said they would agree to a mandate, with Monfort noting that the pandemic is a national emergency and people should treat it as one.

“They’re going to have to make some sacrifices; I hate wearing a mask, just like everybody else, but I wear them because I want to keep myself safe and everybody else,” Monfort said. “We’ve got to go with the science on this. … If you don’t think half a million dead people is an emergency with 4,000 dying every day is an emergency, I don’t know what is.”

Monfort was noting the number of nationwide coronavirus deaths at the time. The total has now reached more than 526,000, according to the CDC. Columbia County has had 54 deaths as of Wednesday, according to its health department website.

Murphy said the topic of a citywide mask mandate will be on the agenda for the March 25 council meeting when they will also discuss whether the city should again extend its state of emergency due to the pandemic.

The Wisconsin Newspaper Association recently recognized the work of Capital Newspapers staff as part of its annual Better Newspapers Contest.

Columbia County will add a new limited-term public health nurse to help expand its COVID-19 vaccine clinic, while the Health and Human Service…

Proposed changes to Columbia County Board policies are causing concern among some former board supervisors, who see them as concentrating too …

COVID-19 vaccinations open to everyone 16 and up April 5, where to get vaccinated in Juneau County

Wisconsin is opening vaccine eligibility to everyone age 16 and older April 5, nearly a month before previously expected.

Several Columbia County Board members did not wear masks -- or wore them incorrectly -- at the Jan. 20 board meeting, including Denise Brusveen of Poynette, at right.

Portage Common Council member Mark Hahn questions Mayor Rick Dodd and city staff during a meeting in late April 2020. Council members have been meeting via teleconference for nearly a year.