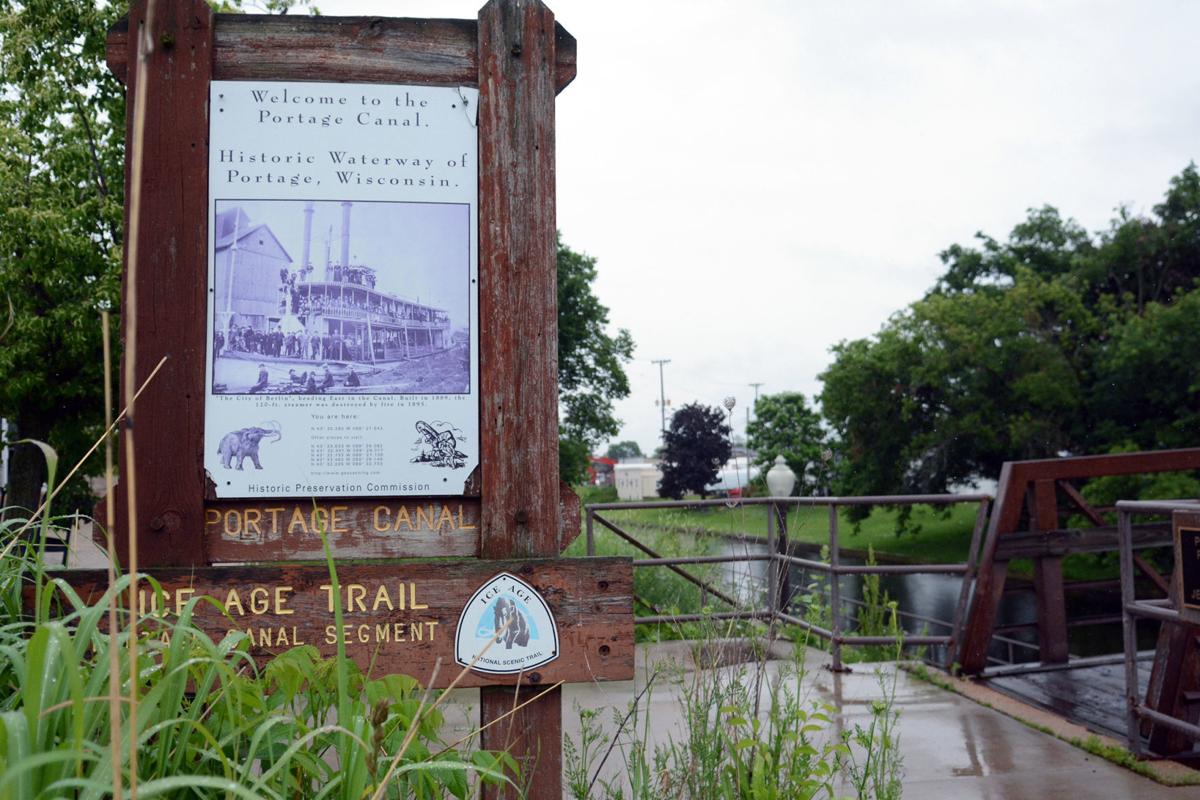 A Historic Preservation Commission plaque highlights the beginning of the Portage Canal near its pedestrian bridge that connects West Mullett Street and West Edgewater Street. Portage City Administrator Shawn Murphy said Tuesday that dredging of the canal along with other improvements will get underway in 2021. 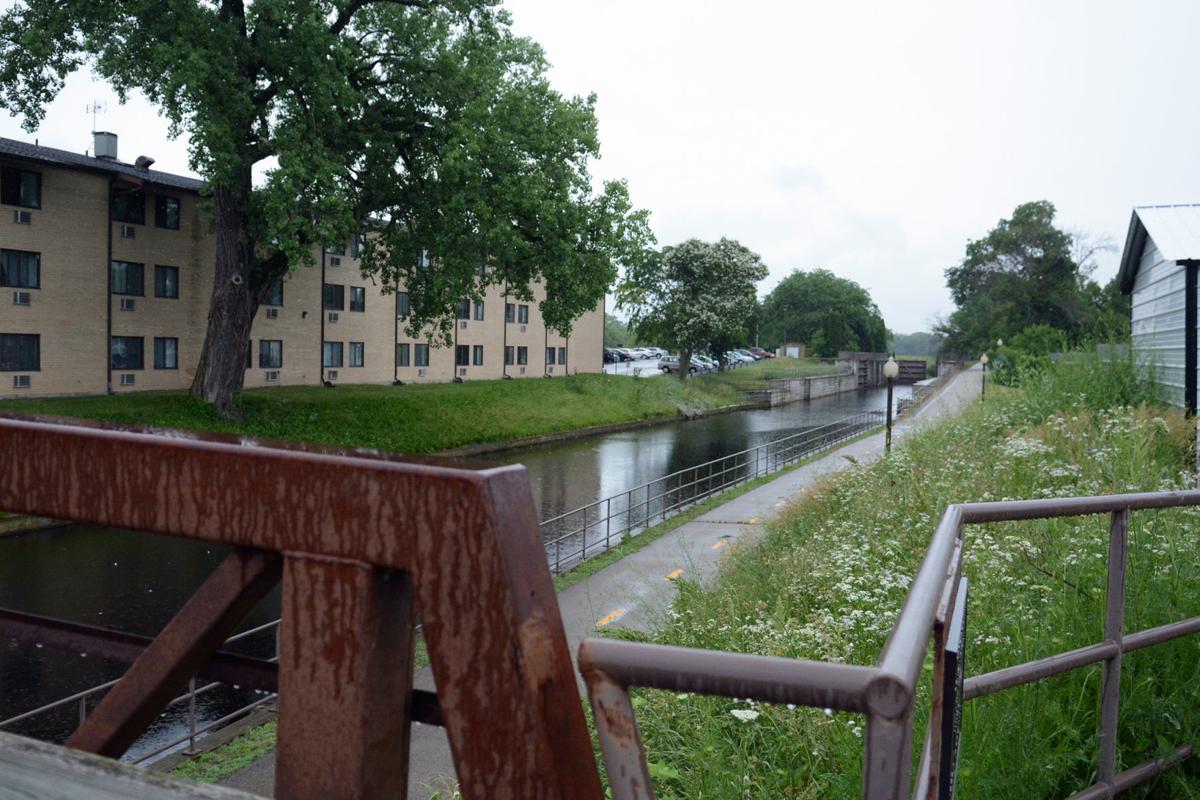 This portion of the Portage Canal was dredged several years ago. New work, on the section from Adams Street east, is expected to commence in 2021, city leaders learned Tuesday. 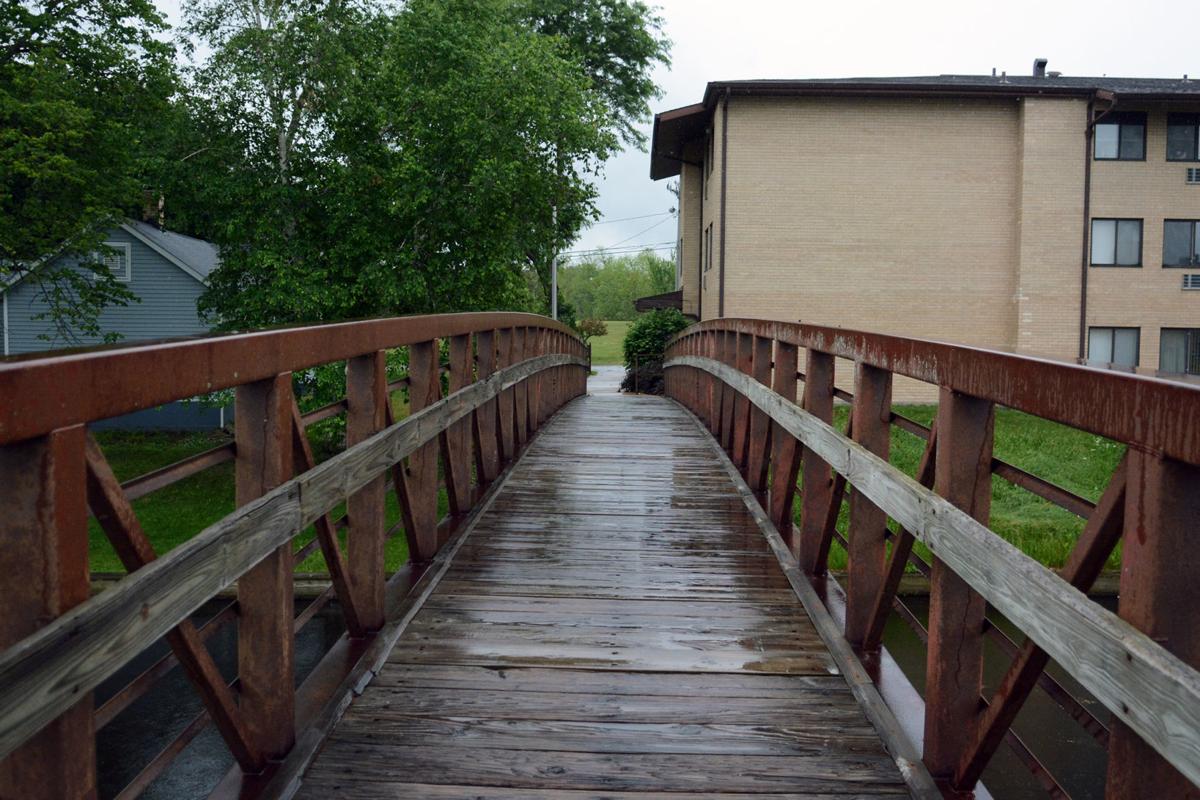 A footbridge crosses the Portage Canal.

Work to improve the Portage Canal will come at double the cost of what officials initially thought after receiving updated estimates in recent months.

Portage City Administrator Shawn Murphy told Finance and Administration Committee members during a special teleconference meeting Tuesday the city has reached “the point of no return” for its plans to upgrade the Portage Canal over the next three years.

He said project costs doubled after the Wisconsin Department of Natural Resources sought new bids for the work. The numbers replaced cost estimates that were established in the late 2000s, said Director of Public Works Aaron Jahncke. Murphy said the work will be delayed until 2021 as a result. Part of the delay is also due to shutdowns caused by the COVID-19 pandemic. The DNR is working with the city to complete all of the work for the next three years in a partnership that financially benefits Portage.

Initial estimates projected an expense of $4.3 million for the project, but Jahncke said the estimate was more than a decade old, prompting the need for more funding when officials sought bids on the job.

Murphy told members the DNR found additional funding, but the delay means work won’t begin until 2021. The city received grant funding from both federal and state sources to help cover the cost of design and rehabilitation of the canal. It has been working with consultant Short Elliott Hendrickson Inc. on design plans.

After seeking bids from companies to dredge the canal and install the additional trail in April, the DNR found the total project cost will be more than $7.4 million. The city share of the costs is slightly more than $1.2 million, but $659,000 in grant funding reduced the remaining obligation to about $546,000. For installation of the bridge and its needed inspection, Murphy said the total bid came in at $344,000, of which slightly more than $162,000 will be paid by the city after $181,000 in grant funding is applied.

A proposed design contract from Short Elliott Hendrickson recommends the establishment of stormwater improvements and a multi-purpose trail along the canal at an additional city cost of $53,000.

Cumulatively, the project will be an estimated $9 million, Murphy said. After applying nearly $550,000 in 2020 budget funds, the city will still need to borrow $1.3 million in 2021 to complete the project.

The high number was a source of resentment for some members, though they acknowledged the work needs to be done to improve the city. If it weren’t acted on, the city would cut its partnership with the DNR and forfeit $900,000 in grant funding and likely need to pay for design costs it already incurred.

Dennis Nachreiner said he would “hate to see” bonding increase significantly in 2021, but the project is needed, and the city is gaining $7 million by working on it now.

“One side of me just says we just don’t have a lot of choice,” Nachreiner said, noting he didn’t want to sound negative about the improvements while also feeling apprehensive about the bottom line. “We can’t afford not to do the canal and we can’t afford to not do it now because we lose our funding.”

Mark Hahn said because of added street projects, bonding will be high and it has to be added during a time of financial uncertainty because of the impact of COVID-19.

“It probably couldn’t have come at a worse time,” Hahn said. “It’s going to impact us big time, coming up here I think, in the next couple of years. This is something we just have to deal with, but I hope everyone understands that ‘What else are we going to do?’ This is no other alternative, I hate to say it.”

All members voiced agreement, noting that the canal is an integral part of the stormwater system and in need of rehabilitation to function at its best. Allan Radant said he and his neighbors who live near the proposed dredging site are excited to see the area revitalized.

The scope of work will include dredging the canal from the Adams Street bridge to the Canadian National Railroad crossing, an area Murphy referred to as “pretty much a swamp,” a newly constructed pedestrian bridge east of the current one connecting West Mullett and West Edgewater streets and an extension of the Ice Age Trail.

Dredging will be done to remove decades of sediment from 3,600 feet of the canal, which is 60 to 70 feet wide. Jahncke said once finished, the water will be 3 to 4 feet deep in the middle.

The Portage Common Council will consider an engineering services contract for the Canal Phase 2 Path Design during its meeting Thursday as the next step, Murphy said, adding that the project will be approved through its “individual components” in future months. The intergovernmental agreement, which was already approved, will be considered again in July and an agreement for the bids for 2022 projects will also need approval by the council.

Portage Common Council members have decided that Phase II of the Portage Family Skate Park, a project four years in the making, can move forwa…

Museum at the Portage to require masks, appointments when it reopens July 8

Starting July 8, Museum at the Portage will reopen its doors to once again share the city’s history with visitors, but only by appointment and…

A Historic Preservation Commission plaque highlights the beginning of the Portage Canal near its pedestrian bridge that connects West Mullett Street and West Edgewater Street. Portage City Administrator Shawn Murphy said Tuesday that dredging of the canal along with other improvements will get underway in 2021.

This portion of the Portage Canal was dredged several years ago. New work, on the section from Adams Street east, is expected to commence in 2021, city leaders learned Tuesday.

A footbridge crosses the Portage Canal.