In 2019, the Columbia County Humane Society in Portage took in nearly a quarter of a million dollars in private donations to help it place more than 1,100 animals into homes.

The Dodge County Humane Society in Juneau received help from outside businesses like Animal Clinic of Beaver Dam offering free exams to newly adopted animals to place 750 animals into homes.

And the Sauk County Humane Society in Baraboo leaned on more than 18,000 volunteer hours to place more than 2,200 animals into homes.

Support is why the shelters always — without exceptions — manage to find a home for a healthy, adoptable animal.

“I’ve been doing this for six years and have wondered if at some point we’ll completely saturate the market (with animals),” Dodge County Humane Society Executive Director Kensington Drinkwine said. “But it hasn’t happened yet. We have fantastic people who come here first when they’re looking to add a pet to their home.”

A common misconception among the general public is that animal shelters receive annual funding for their operations from their respective counties, Columbia County Humane Society Executive Director Susan Bratcher said. Shelters hold contracts with various entities for such services as the intake of stray animals, she noted, but earning money for that is far different from receiving taxpayer support.

“We’re always reminding people that we’re a private nonprofit — even if our name suggests otherwise,” Bratcher said. “All donations, whether monetary or in supplies, will go directly to our cause and help us to stay in operation throughout the year.”

Sauk County Humane Society Outreach Manager Rachel Leuzinger said community support is critical for a shelter that accepts every animal no matter its age, disposition, breed, health or where it came from.

“We even had an alligator once,” Executive Director Dana Madalon said of the open-admission shelter located in Baraboo. “We never turn an animal away.”

Fourteen staff members and about 25 volunteers at Dodge County Humane Society handle a wide assortment of tasks to care for as many as 80 animals on site at one time, Drinkwine said.

Like other shelters its tasks include the routine cleaning of dishes, litter boxes, cages and the yard outside. They include daily enrichment activities to provide the animals with exercise and human interaction. They include providing medications and special care for injured or sick animals, following up with animal neglect issues, promoting adoptable animals on social media and websites and filling out an extensive amount of paperwork that document operations.

That’s not even half of it, Drinkwine said. “I think the most common misconception about shelters is that the people who work here, whether as an employee or volunteer, spend all of their time playing with the cats and dogs.

“There’s an incredible amount of work that goes into taking care of animals 365 days a year.”

A little-known but important way for community members to help their local shelters handle such workloads is by signing up to foster certain animals as needed, shelter leaders agreed.

Whenever a shelter nears or reaches its capacity, it leans on foster volunteers.

“It happens mainly with cats during the warmer months,” Bratcher said of reaching the maximum capacity at her facility in Portage — 21 spots for dogs and 63 spots for cats. “We call it kitten season.”

Bratcher said she utilizes somewhere between 25 and 40 foster families for cats alone. Whenever shelters have enough foster homes in their respective rolodexes, they won’t need to spend so much time looking for alternatives.

“Expanding our foster list is one of our big goals for 2020,” Drinkwine said in Dodge County. “We’re really pushing it and anyone who’s interested in fostering just need to talk to us.”

As an open-admission shelter, Sauk County Humane Society accepts animals from near and far including last year when it took in 50 cats from Juneau County and 23 dogs from counties other than Sauk.

“We don’t require surrender fees and we’ll take in severely sick and injured animals as well,” Leuzinger said. Surrendering an animal is usually a last resort for most pet owners, she said, which usually means they can’t afford surrender fees, even fees as low as $20.

The Baraboo facility is also the only shelter within a 100-mile radius that has its own spay and neuter clinic on site, Leuzinger said. Without its ever-expanding volunteer base — it grew 15 percent in 2019, she estimated — the clinic that launched in 2014 wouldn’t be operational.

“The No. 1 way to prevent unwanted animals from coming here is to prevent them from being born in the first place,” Leuzinger said of its low-cost spay and neuter services: $40 for cats, $90 for male dogs and $110 for female dogs.

People typically need to pay more than double those amounts at their local clinics, she added. “We are absolutely cheaper than anywhere else.”

Overcome the stigma of adoption

Dr. Michael Cooper of Portage Veterinary Clinic and Dr. Karie Raisbeck of Animal Clinic of Beaver Dam said they encourage the adoption of animals at every opportunity.

“The animal population is so prevalent these days that we really want people to understand there are plenty of animals to adopt,” said Cooper, who joined the Portage clinic in 1985 and eventually purchased it from Dr. Russell Smith. “Very few people have regrets (with adoption). Most folks, when they adopt, they’re happy, the animal is happy — everyone is happy.”

Raisbeck said free exams her clinic offers for newly adopted animals is “a reward for adopting as opposed to buying” — an effort to help the animals, the pet owners and everyone who is involved in animal care.

“People are sometimes worried to adopt an animal from a shelter because they think, ‘Oh, they might be sick’ or ‘You never know what you’re getting,’” said Raisbeck, who has practiced at Animal Clinic of Beaver Dam since 2006. “The free exams are my way of saying, ‘We’ll check it for you,’ because, usually, they’re completely fine and everything is great.

“We offer reassurance for them.”

Cooper said clinics including his own will counsel pet owners on the importance of knowing your pet prior to the adoption or purchase — making sure they understand that research is the best way to avoid regrets.

“Not every breed is going to be a good fit for every household,” Cooper said. “Know the characteristics of a given breed before you adopt and remember everything you’ll need to provide for their needs: their food, their water, veterinary care, love — there are so many things that you’ll need to provide and you need to make sure it fits your lifestyle.”

Aside from needing volunteers and monetary donations, the specific needs of animal shelters can vary wildly from one shelter to the next and leaders have encouraged residents to reach out to the shelter first before providing item donations.

“People will go to the grocery store and buy dog and cat food and then they’ll bring it here, but that is the one thing we don’t need,” Madalon said of Sauk County Humane Society, which has a partnership with Mounds Pet Food Warehouse for food for adult dogs and cats. “We need kitten food and puppy food, but all the other food that comes in we donate to wildlife rehabbers.”

The Baraboo facility — which has an annual budget of $550,000 — relies on monetary donations for a fund that’s used to treat severely sick and injured animals like Henry the cat who was nearly decapitated when someone found him in a car engine and Jerry the dog who needed a bone graft to fix his fractured jaw after someone had dumped him on the side of the road.

In extreme cases, special care for one of these animals might exceed $30,000, Leuzinger said.

Columbia County Humane Society Shelter Manager Jennifer Schikirkie said the Portage facility could use more volunteers for walking dogs and spending time with cats and Bratcher said the shelter always needs cat litter — it’s one of the biggest needs at this time of the year for a shelter that spent more than $425,000 to operate in 2019.

“Every year the support goes up and I’m thrilled to see it,” Bratcher said of overcoming challenges, however possible. “We’re so grateful and it’s hard to find the right words for it because it means so much.”

“The work is extremely rewarding, but we simply can’t do it without people,” she said. “It truly takes an entire community lifting the shelter to do everything it does.”

IN DEPTH: Successful startups utilize resources, capital and some luck

Half of new businesses in America fail within their first five years, according to U.S. Small Business Administration. 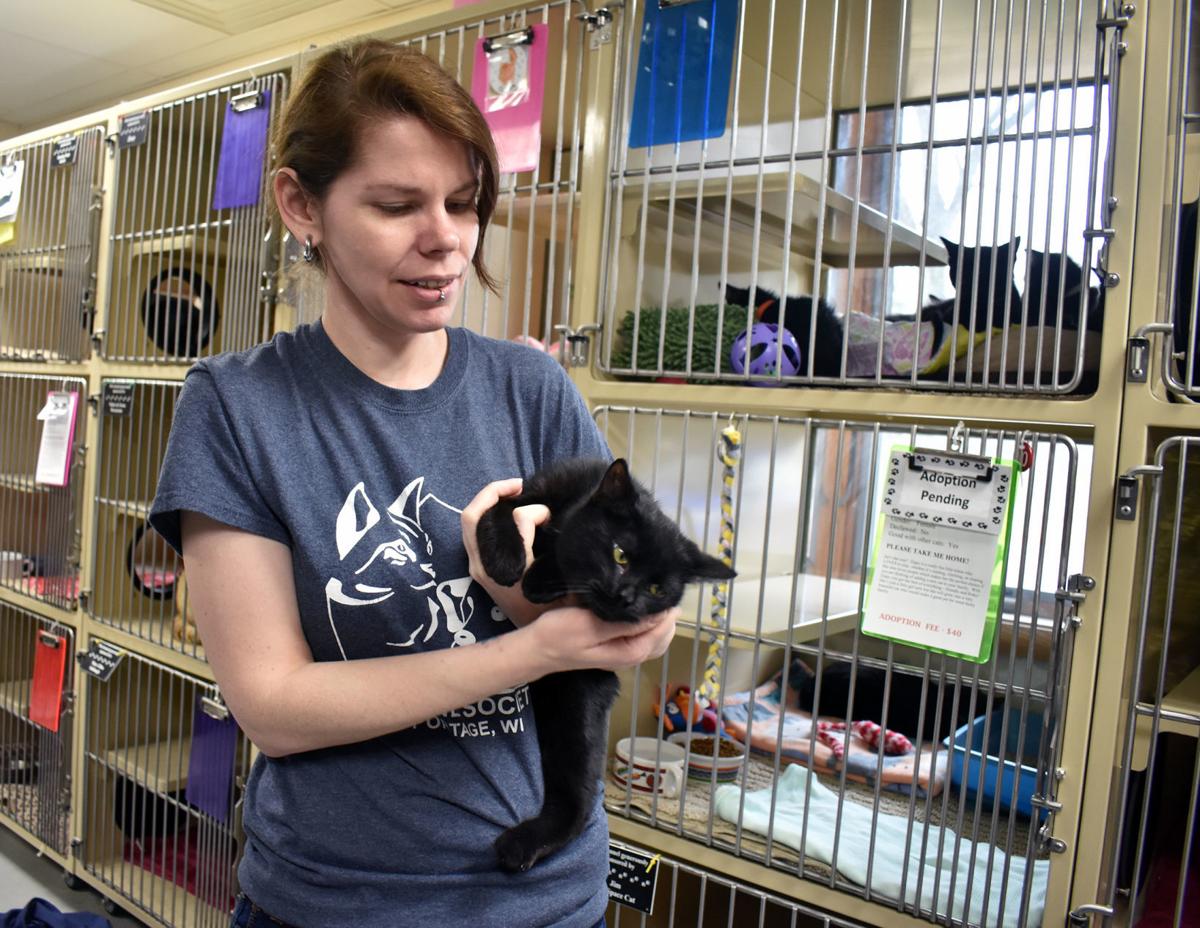 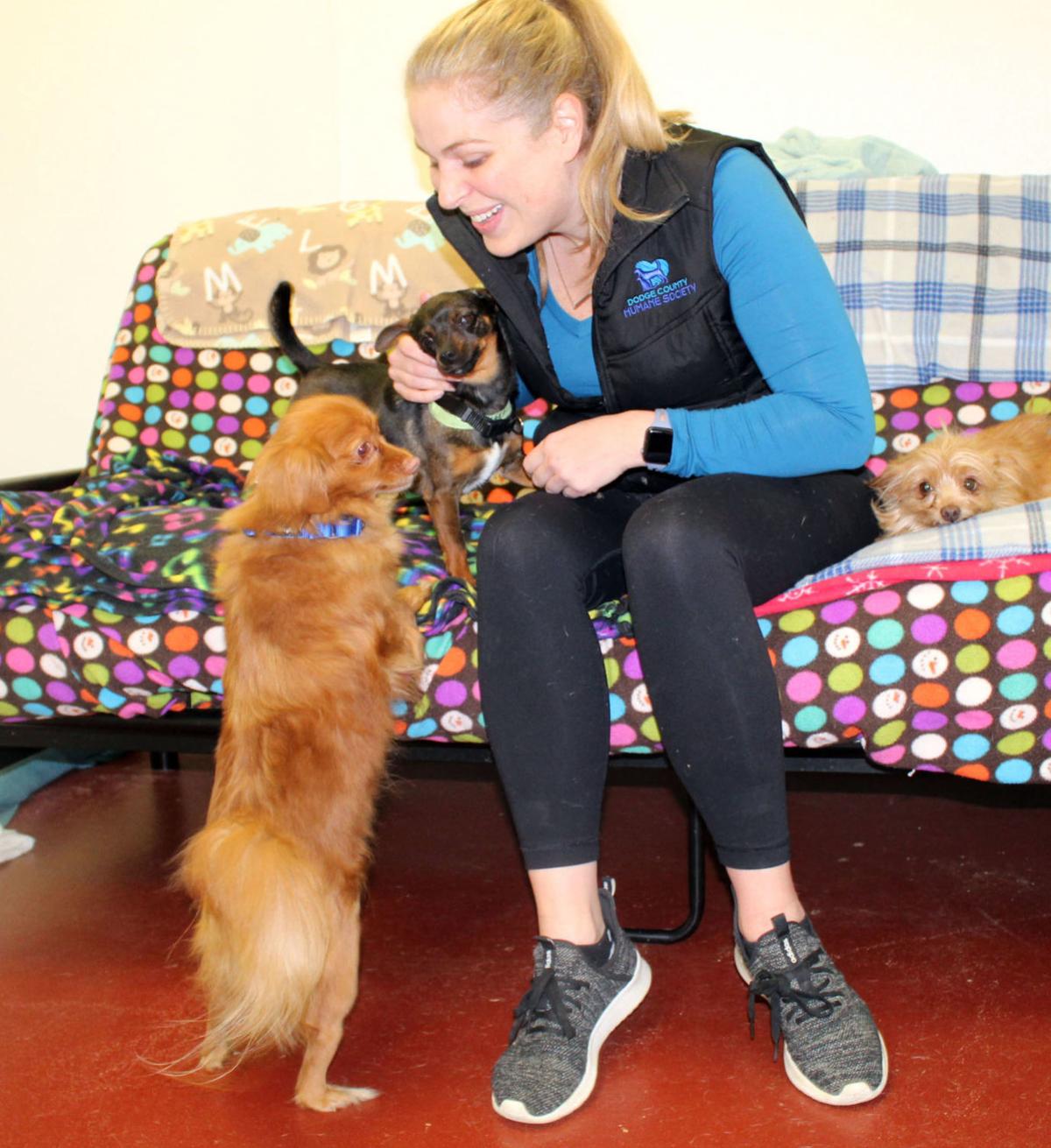 Dodge County Humane Society Executive Director Kensington Drinkwine on March 16 plays with some of the 22 dogs that were rescued from a village of Lomira residence a few days earlier. More than 200 volunteers turned out March 14 to drop off supplies and to help care for the dogs in the shelter. 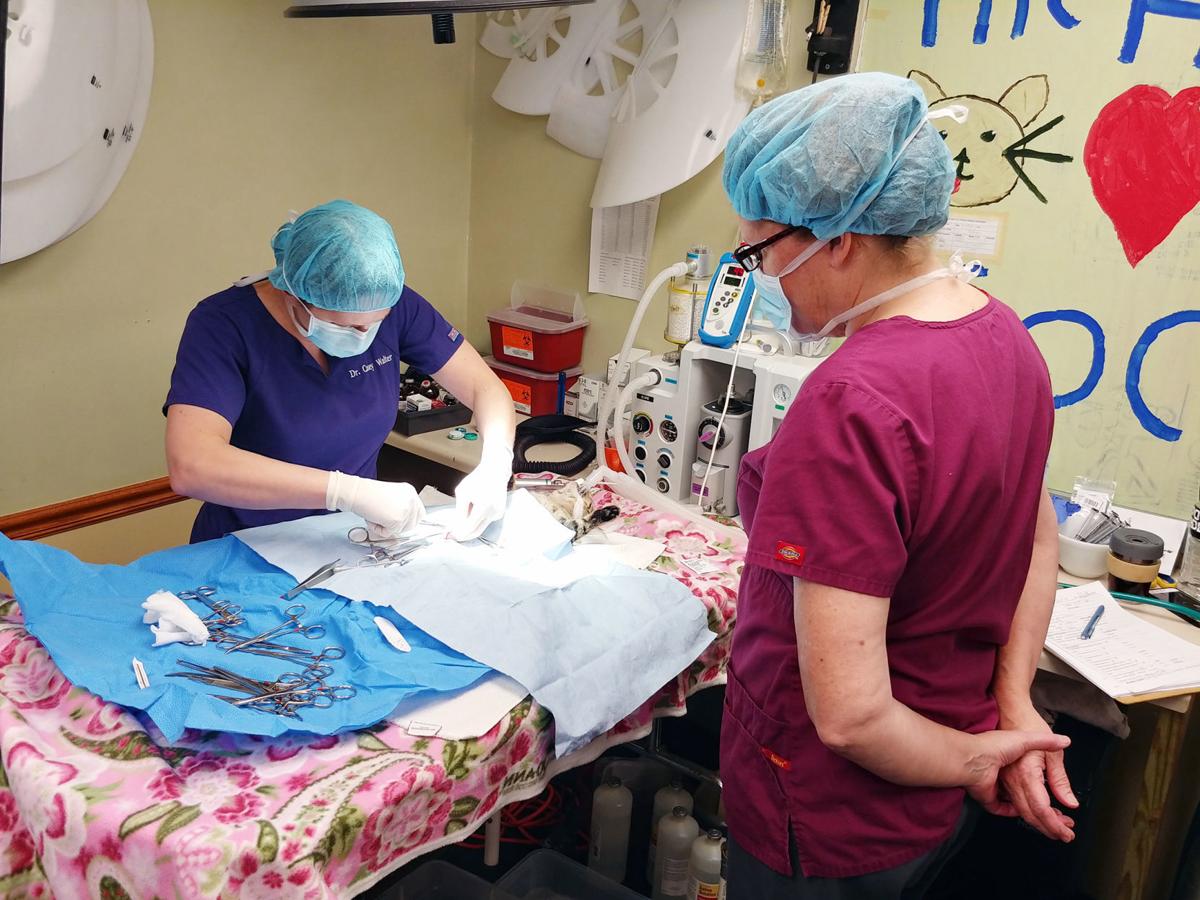 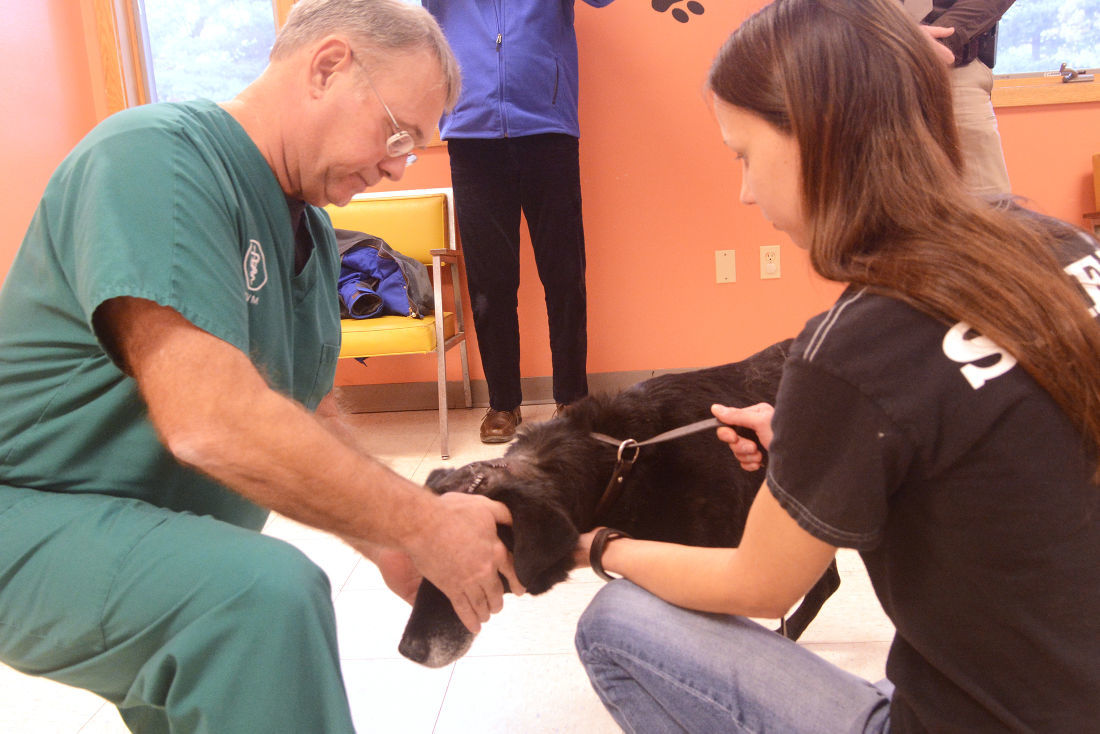 Veterinarian Dr. Michael Cooper in January 2016 examines Misty, the dog that was found severely wounded and abandoned in a duffel bag in the town of Fort Winnebago, with aid from Susan Bratcher, executive director of the Columbia County Humane Society. Misty had multiple surgeries, including for cancer, was adopted but only lived about another nine months. Her story captivated people far from Columbia County 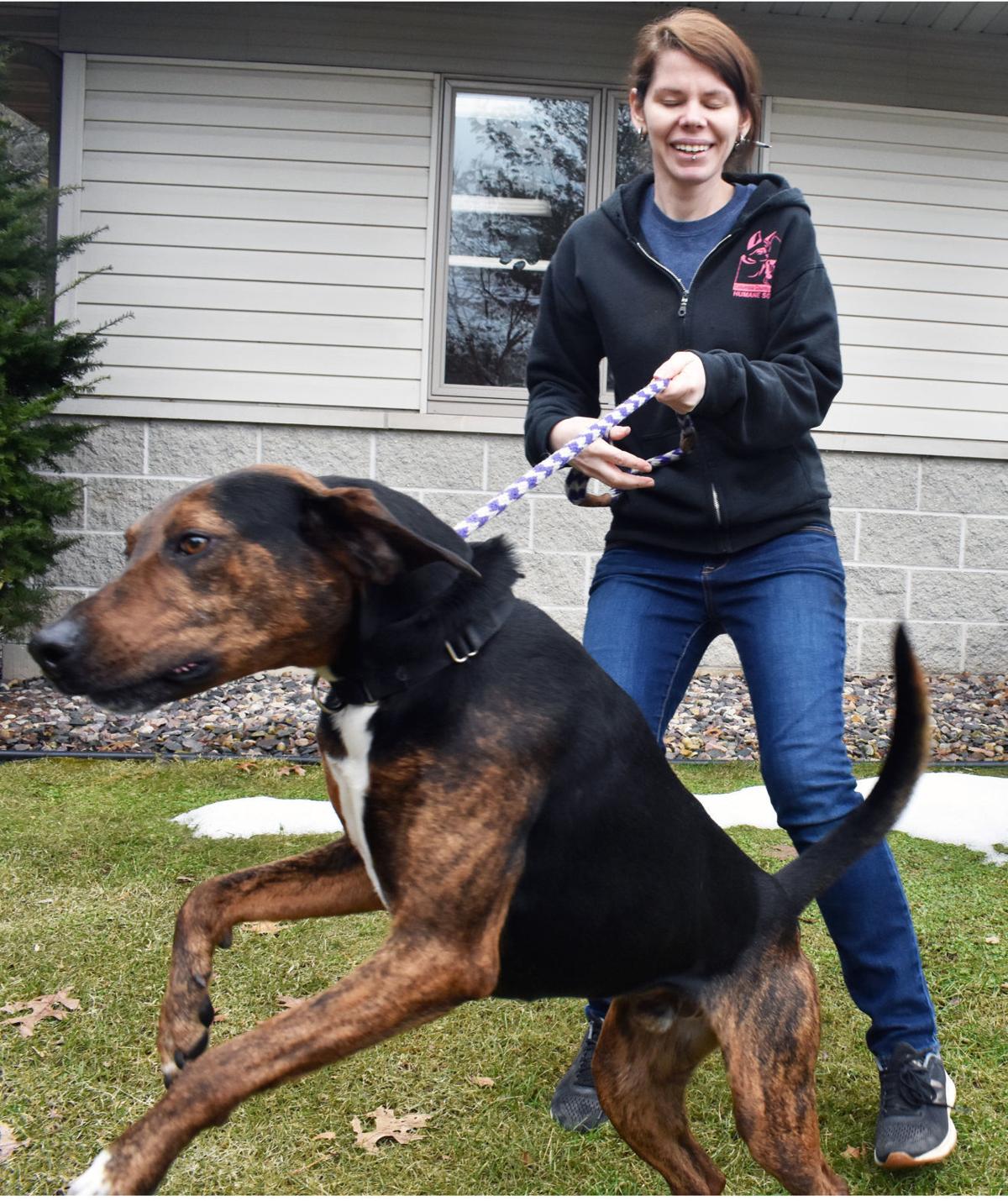 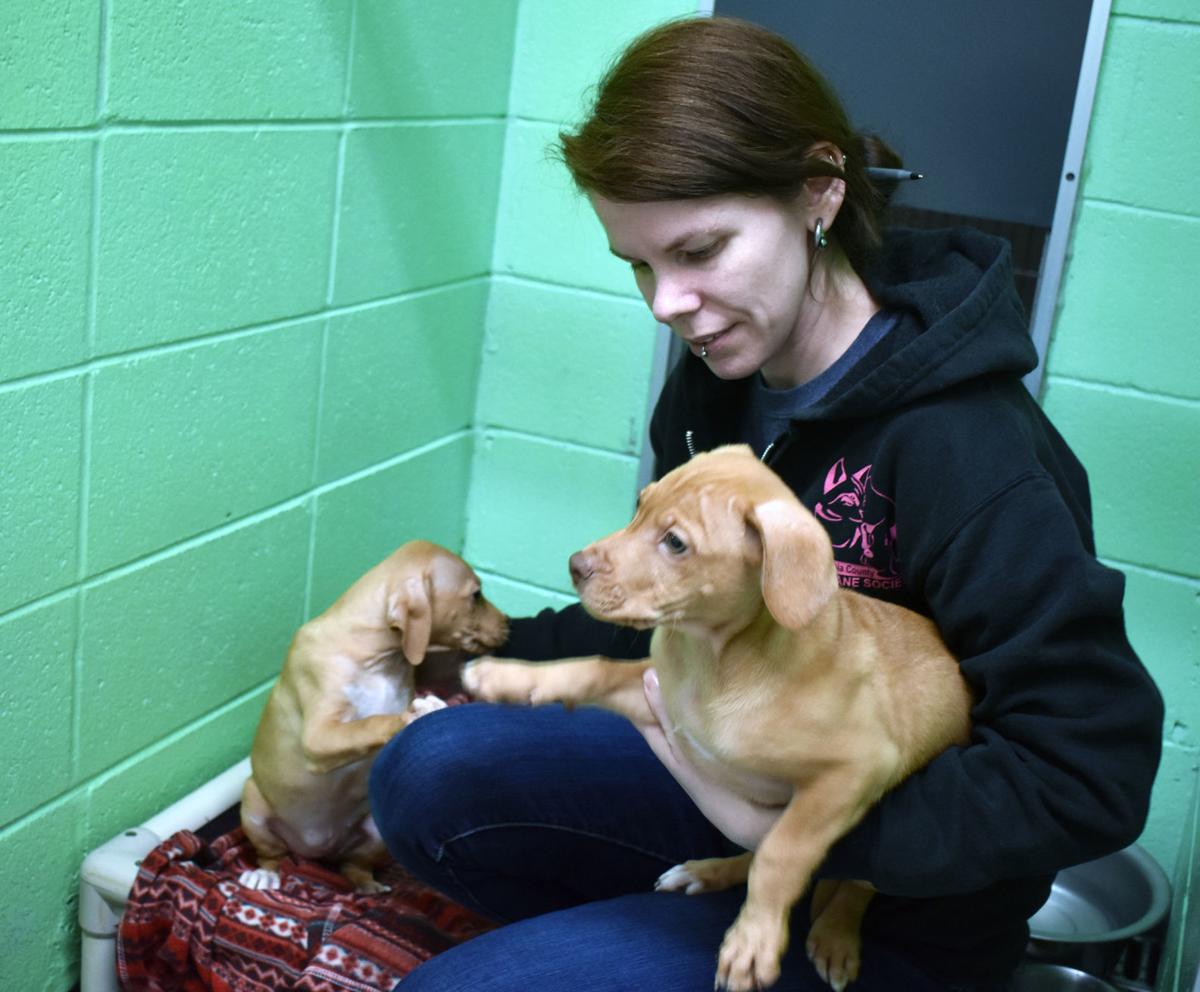