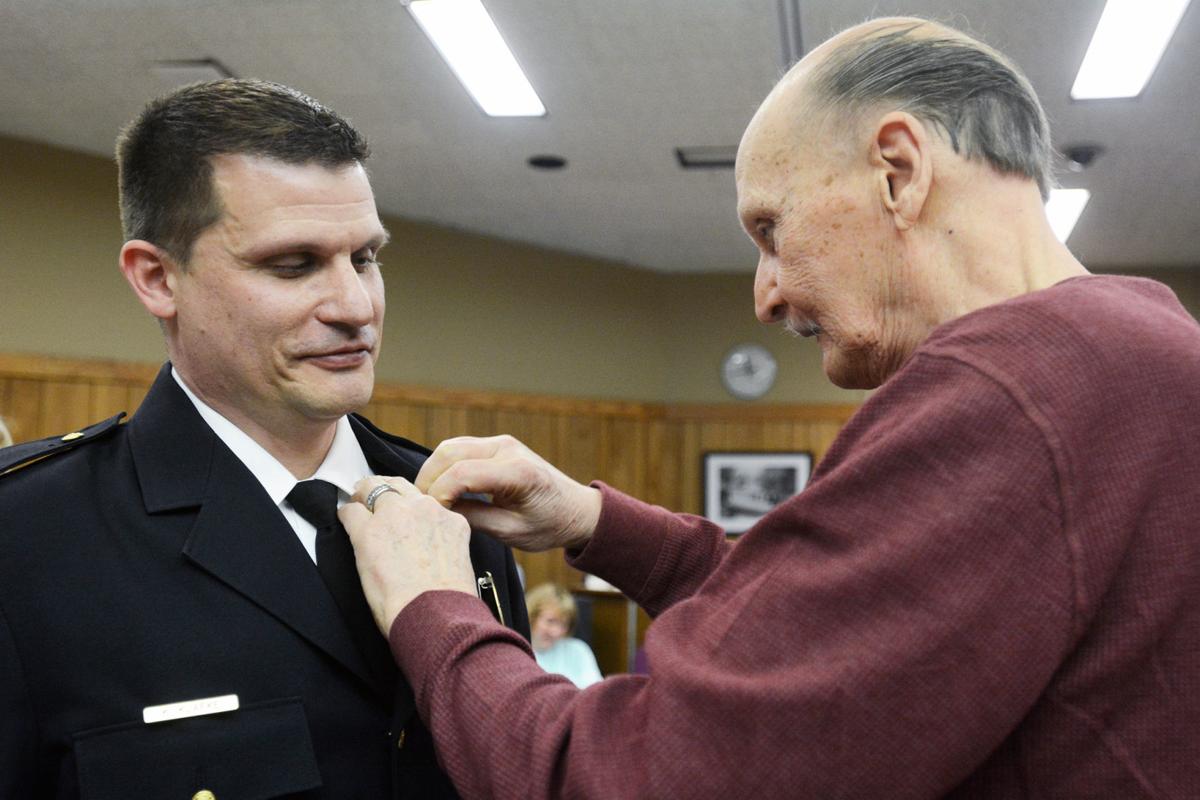 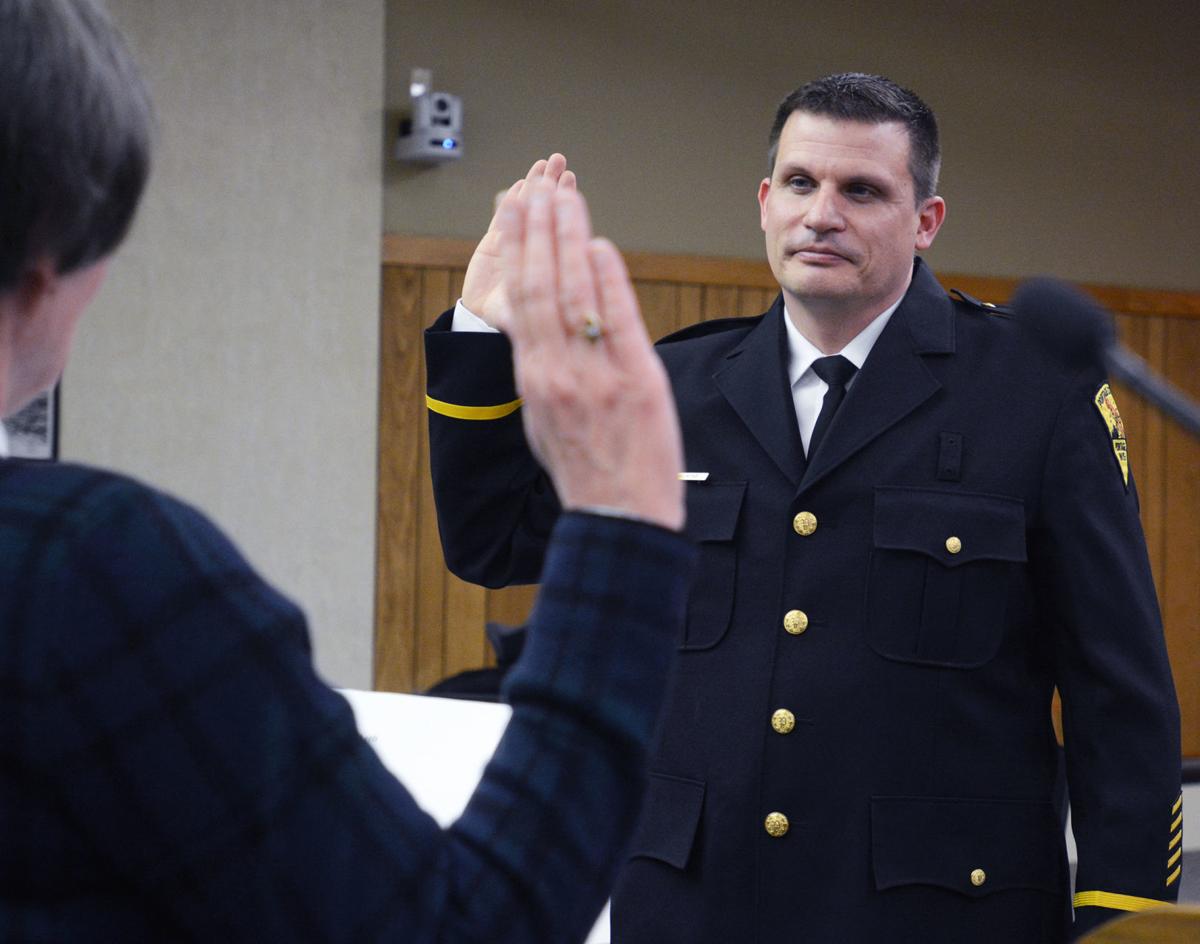 Now Portage Police Chief Keith Klafke takes the oath of office given by City Clerk Marie Moe during his swearing in ceremony Thursday at City Hall. 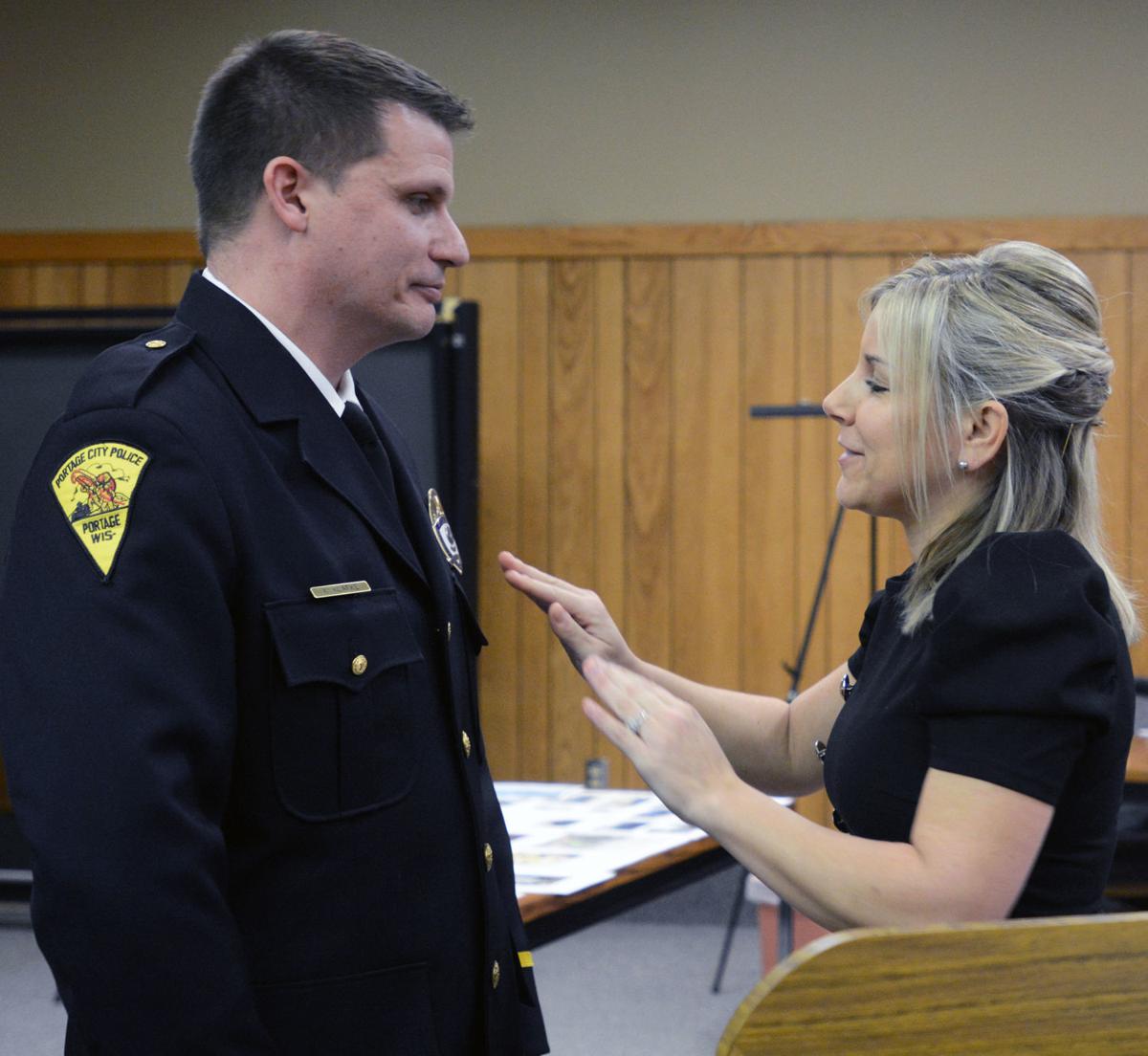 Nancy Klafke, right, pins newly sworn-in Portage Police Chief Keith Klafke's badge to his chest Thursday at Portage City Hall. He has served on the police department in a variety of positions since he began in September 2001. 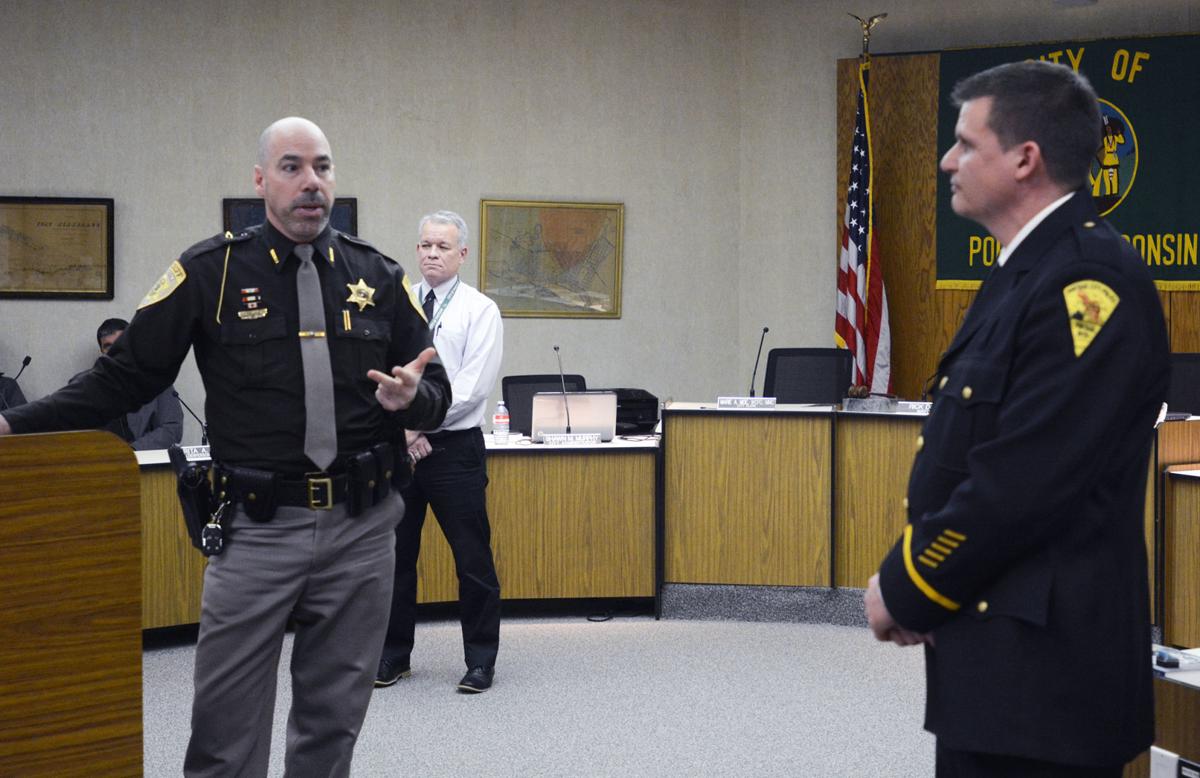 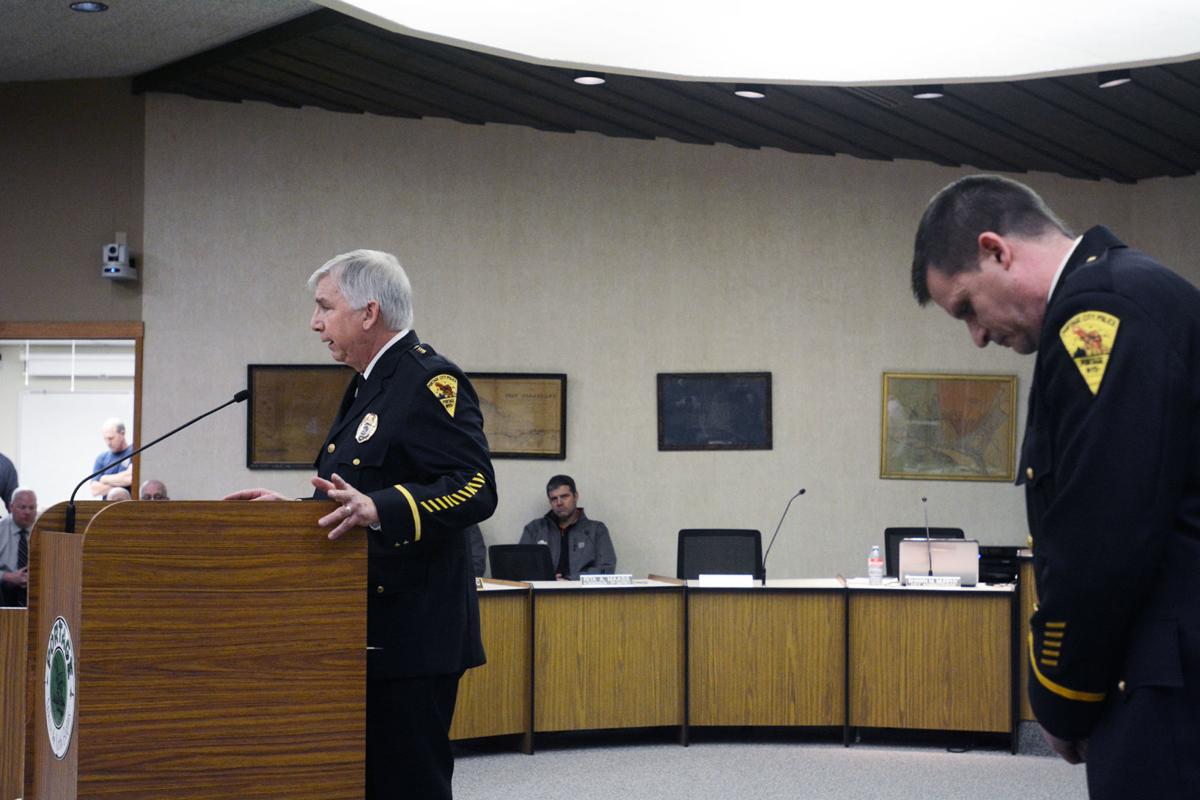 Outgoing Portage Police Chief Ken Manthey talks about the work of Keith Klafke, who took the chief position after being sworn in Thursday at City Hall.

Surrounded by family, friends and colleagues, former Portage Police Department Assistant Chief Keith Klafke took the mantle of the department while focusing on the team and its future.

Noting other speakers’ points about family and support, Klafke pointed to his immediate family in the audience, thanking them for their support during hard times. Then he noted officers he spends time with are people he cares about nearly as much.

Together in partnerships with city officials and county law enforcement, he said, they could make a great department even better.

“I want to take care of them and I want us to have the best department in the state of Wisconsin,” Klafke said. “Why just stop at Columbia County, right? That doesn’t happen by me, that happens by all of you. … You guys are really the backbone. I’m proud to be here.”

More than 50 people packed into the Portage Common Council chambers Thursday morning, eager to see Klafke receive his new uniform embellishments. After taking the oath administered by City Clerk Marie Moe, his father, Ken, affixed chief pins to his dress shirt. Klafke’s wife, Nancy, pinned a badge to his uniform while she received her own, smaller “Chief’s Wife” badge.

Klafke received a number of compliments as peers and officials reflected on his 18 years in the department. He began as an officer in September 2001. He was sworn in as assistant chief in August 2018.

City Administrator Shawn Murphy paused to hold back emotions while reading letters from people Klafke helped in the line of duty: a man who Klafke prevented from dying by grabbing a knife out of the man’s own hand and a 17-year-old girl who was abused by her significant other. Both thanked him for his actions that helped them continue their lives for the better.

After a few jokes by retiring Chief Ken Manthey about the correspondence he has received about sandhill cranes, in reference to an outraged public after an officer shot a crane over Labor Day weekend, Manthey credited Klafke for his contributions to the department.

“He doesn’t complain, he looks at what needs to be done and he gets it done,” Manthey said.

Columbia County Sheriff Roger Brandner said Klafke is a “good partner” with drive and dedication to the community, much like his predecessor.

“In my first year as sheriff here, there have been many times I’ve reached out to Keith for his guidance, his leadership and for his ideas,” Brandner said. “He is forward thinking and he strives to make the Portage Police Department better.”

Nancy Klafke barely made it through the first sentence of her speech before beginning to cry.

“As Keith takes on his new role today, I want to express how proud I am of him,” Nancy said, wiping away tears. “He has worked so hard and has a true passion to serve his community. I am confident in all of his great ideas to continue moving the Portage Police Department in the right direction.”

From his speech recognizing Manthey to words he shared during the selection process in November, Klafke said the hardest part for him was trying to find the words for his own ceremony. As he stood at the podium, he shared how glad he was to be able to prioritize Manthey’s tradition of community connection.

“I’ve got to look to my teammates,” Klafke said. “We’re going to have a strong connection because we have to. That’s the only way we succeed.”

Portage police apologized to the public Wednesday afternoon for shooting a wild sandhill crane at a city park during Labor Day weekend.

Now Portage Police Chief Keith Klafke takes the oath of office given by City Clerk Marie Moe during his swearing in ceremony Thursday at City Hall.

Nancy Klafke, right, pins newly sworn-in Portage Police Chief Keith Klafke's badge to his chest Thursday at Portage City Hall. He has served on the police department in a variety of positions since he began in September 2001.

Outgoing Portage Police Chief Ken Manthey talks about the work of Keith Klafke, who took the chief position after being sworn in Thursday at City Hall.