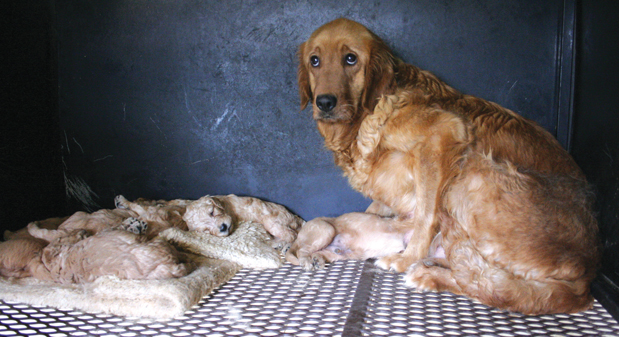 The golden retriever mother, seen here Monday, will spend six weeks with her litter in the elevated cage at Puppy Haven. 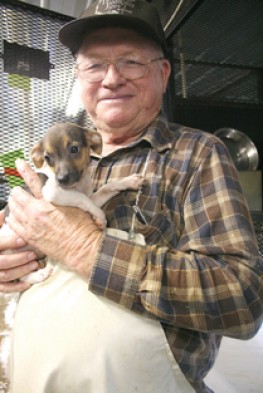 Allen Maas, an employee for three years at Puppy Haven, hugs his favorite rat terrier puppy on Monday in the whelping pen.
By Jen McCoy

KINGSTON - The Wisconsin Humane Society purchased one of the largest commercial dog breeding facilities in the state, Puppy Haven, and it will cease operations and find homes for more than 1,100 dogs.

The transaction between WHS and the owner, Wallace Havens, occurred after Havens was willing to substantially discount the sale of the business, although the sale price is not to be disclosed based upon the agreement. Havens is ready to retire from the practice after 34 years.

"This is a happy deal, not where the cops come out," Havens, 72, said. "I've been working with the Wisconsin Humane Society for seven years because it's the nicest place to sell my dogs to."

Havens created the "designer dog" Puggle, which is a cross-breed between a pug and a beagle, and has sold them across the country to pet stores and famous clients, according to Havens.

"We have 30 different breeds and 75 different crosses," Havens said. "Each time we have a new litter, it's been like our artwork."

Havens will retain the 20 acres of land the kennel occupies, and sell just the dogs and the equipment used in his breeding operation. The decision to purchase and close the kennel was made by the WHS Board of Directors after a good deal of time considering the best course of action for the dogs and WHS's ability to obtain the funds necessary to make the purchase.

According to a WHS press release, the living conditions for dogs in mass breeding facilities do not meet the medical, social or emotional needs of dogs, making the purchase consistent with WHS's mission to create a community that values animals and treats them with respect and kindness.

According to the WHS, the transfer of dogs will occur over several months so each dog can be provided with the best possible care while WHS continues to serve animals from the community. The dogs began leaving the kennel for the WHS facility in Milwaukee on Thursday, and about 300 had been transferred as of Friday. But the overall transfer of dogs may take until September, according to WHS.

The Puppy Haven property will not be used again to breed dogs, none of the dogs at the facility will be sold for further breeding and Havens will not receive windfall profits from the sale, according to WHS.

Havens is supportive of legislation to strengthen the oversight of breeding facilities and consumer protection for people interested in obtaining a dog.

"There will be 2,000 to 4,000 less dogs going onto the market because of this (WHS agreement)," Havens said. "A female dog has five litters, but some have six or seven. Then people think that we take ‘em out and shoot ‘em. We give them to the Humane Society."

Havens defends the care dogs have received at the kennel, and a representative with the Wisconsin Retired Breeders Rescue club said in February it's far from the worst. It was suspended and fined by the American Kennel Club in 2006, however, because of poor conditions there.

Since February, WHS has received about 300 dogs from Puppy Haven in anticipation of the sale and prior to completing the complicated legal arrangements. Those were dogs being culled; slated for auction or euthanasia because of their health, age or inability to breed. Some of those dogs with special needs were accepted by qualified and caring breed placement groups.

Allen Maas, a kennel worker, said that he loves dogs­­ - and all animals - after being raised on a farm. He has worked for Havens for three years.

Maas was hosing beneath the pens on Monday, making sure to get a hug from his favorite puppy, a smooth-coated rat terrier.

There are three base kennels where males and females breed with three to five females and one male in a 4-by-8 cage with a cement floor and an outdoor gravel run, according to Havens.

The silver painted dog doors often leave a blue tinge on white dogs from pushing it up to get in and out. The dogs are fed by self feeders and drink from tubes which they lick. The dogs are not housebroken, and have not spent time with people inside homes, according to Havens.

There are no toys in the cages or the gravel runs. There are ventilation systems inside the kennels.

Various breeds are kept in the same packs, such as a Pekinese, beagle and a few lhasa apso. At times on Monday, fights would start in the gravel run, either within packs for human attention, or when dogs in the next cage would chase each other up and down the length of the fence.

Some of the long-haired dogs' backs were matted with feces or hair was dreadlocked near their faces, but all breeds are shaved at least twice a year, according to an employee who did not want to be identified. One tan spotted hound appeared to have a hip problem and several had eye infections. Such animals have been seen by a retired veterinarian, the employee said, who comes to the grounds once a week.

There is one whelping kennel, where puppies and their mothers are housed, with dozens of elevated cages.

After word of the impending arrival of the breeding dogs from Puppy Haven, there have been near-record number of adoptions at the WHS, according to the Associated Press. Humane Society spokeswoman Angela Speed said there were more than 67 puppies from the kennel adopted on Sunday, with others lined up outside the shelter at 7 a.m. before the doors open at 10 a.m. Others have dropped off checks to help pay for the cost and rehabilitation of the Puppy Haven dogs.

The WHS wants to recognize that there are responsible individuals breeding dogs who provide compassionate care, they said, but legislation and consumer diligence is required to safeguard animals.

To help with the purchase cost, treatment and re-homing of the 1,000 dogs, visit www.wihumane.org/donate, for a tax-deductible donation. To mail a donation to assist the dogs from Puppy Haven, address it to Wisconsin Humane Society c/o Puppy Haven Dogs, 4500 W. Wisconsin Ave., Milwaukee, WI. 53208

Sudanese man in NYC unable to talk to family

The golden retriever mother, seen here Monday, will spend six weeks with her litter in the elevated cage at Puppy Haven.