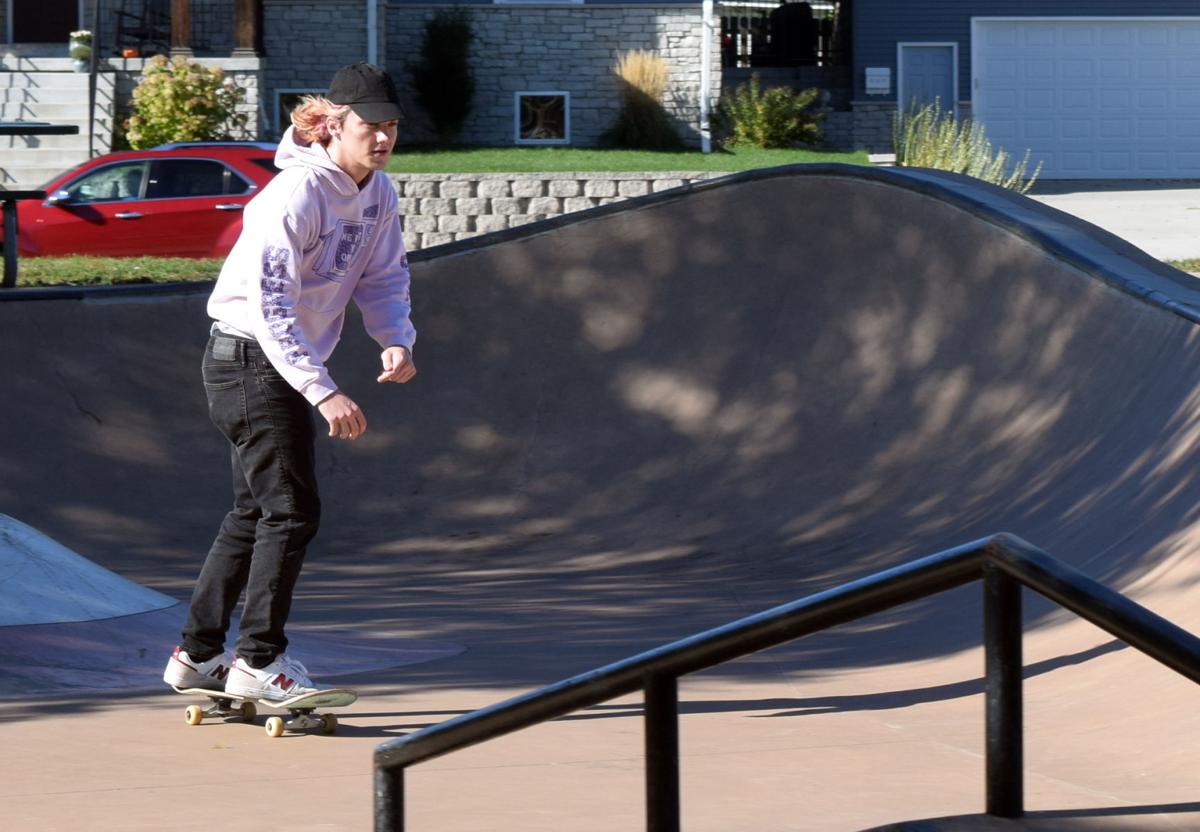 Alex Meiller lines up his next trick at the Portage Family Skate Park on Monday afternoon. 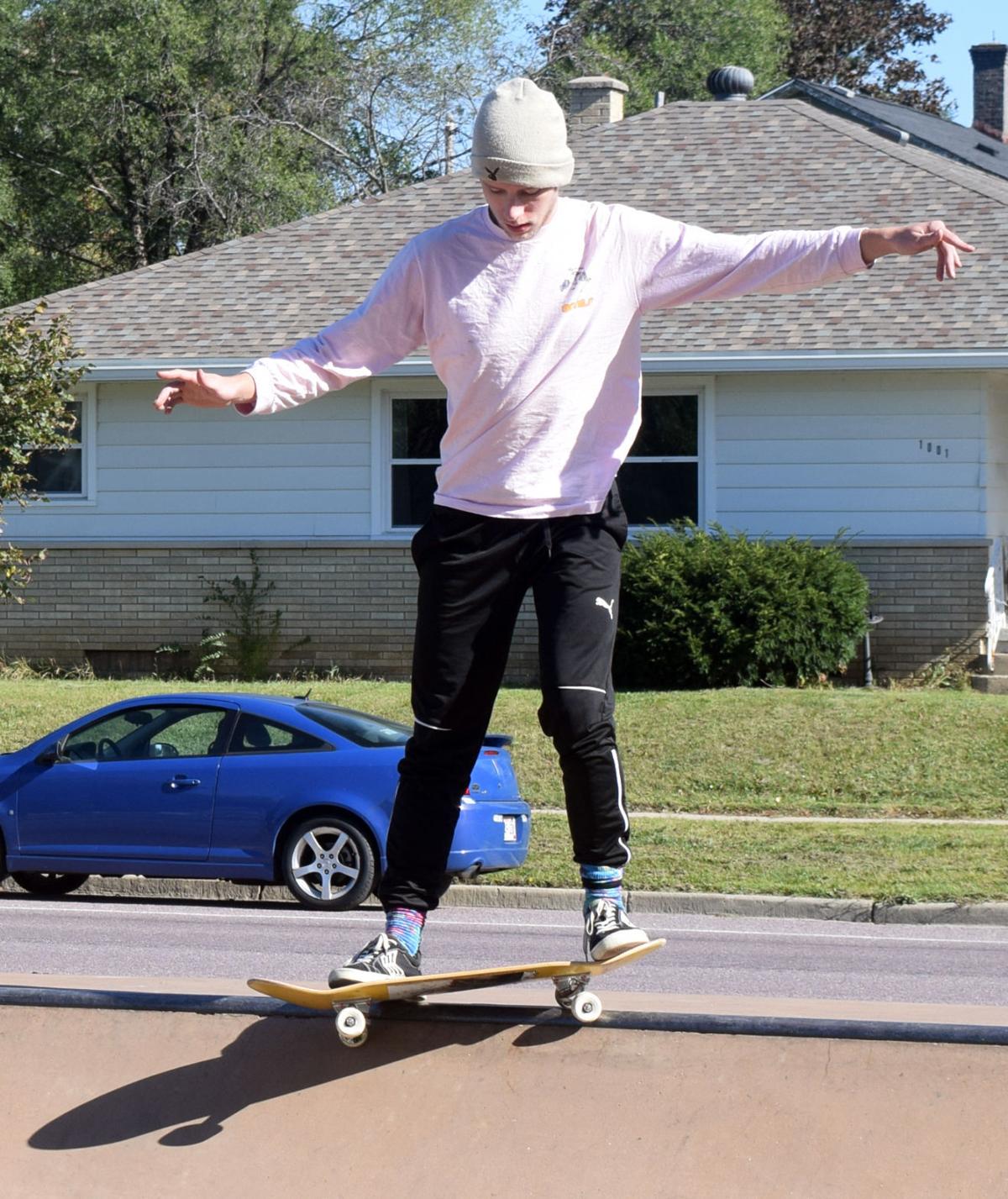 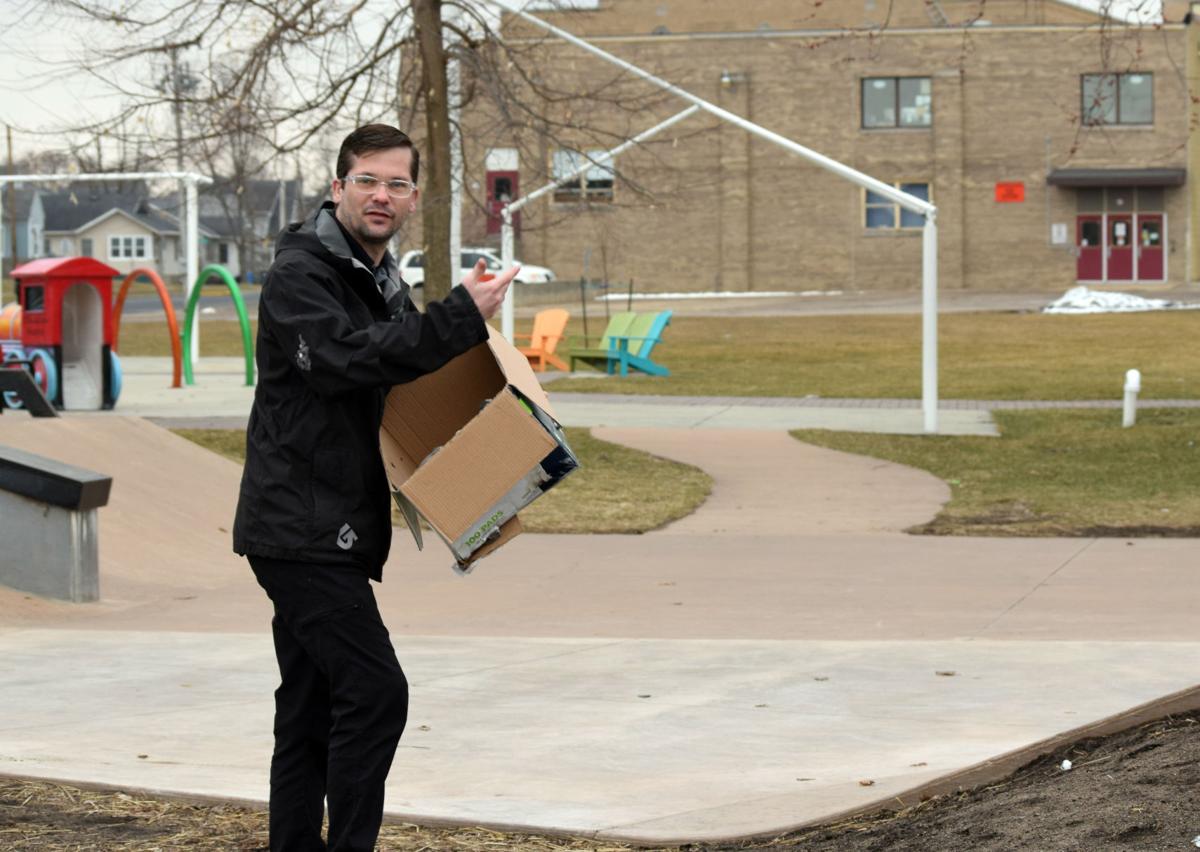 Portage Family Skate Park president Kyle Little spends a few minutes cleaning up debris at Goodyear Park back in March He said his team takes no more than 30 minutes to clean up mostly water bottles and soda cans.

Kyle Little, President of the Portage Family Skate park, said the memorandum of agreement signed in 2020 by Little and Portage Mayor Rick Dodd, outlines that the park needs to be maintained so the community doesn’t lose the community asset to disrepair.

The 2020 memorandum of agreement is a contract with the skate park and the city. It states under responsibilities of city that after phase two of the project was completed the city would inspect the project and “maintain, clean, repair and establish necessary rules for the safe use of the Skateboard Park by the general public.”

Little states the city has fallen short of this agreement with things like regular maintenance. He said the park’s concrete had not been properly sealed since 2016 until last year when Little and a private company paid to have the park sealed.

“There has been no chip sealing or painting done at the park at all,” Little said. “Rust remover for the rails has not been taken care of.”

Little said he has spoken to officials about this and offered suggestions on what the city could buy right now to improve the skate park at Goodyear Park. He said that the lack of maintenance of the park has cost the Portage Family Skate Park grant opportunities.

“We had a big grant opportunity slip away after representatives came to the site and saw it wasn’t being maintained properly,” Little said.

Portage City Administrator Shawn Murphy said there are 19 parks across Portage and the city does not prioritize any of them over others.

“The skate park is a great asset to the community. The city understands it is heavily utilized as were all of our parks over the last year,” Murphy said.

“We have a limited number of funds to allocate to all the parks,” Murphy said. “We address the highest priority needs and address those as quickly as possible.”

Murphy said with the increased usage of the parks since the beginning of COVID-19 that vandalism has increased across all parks costing the city to clean up graffiti. Murphy met with Portage Police and Portage Parks and Recreation about vandalism this year.

The city has responded to 41 acts of vandalism according to the parks and recreation department this year. Murphy said those instances cost the city $5,000 in materials and somewhere between $2,000 and $5,000 in labor costs.

Little said the vandalism is mostly done by non-locals and happens on the weekends.

“Almost all illegal activity has been reported and successfully dealt with,” Little said.

Little said this needs to be addressed soon.

“We will not have anything in the future besides a concrete mess in the central hub of Portage if the city does not step up,” Little said in an email. “The city has been given a gift to improve the living in Portage and it has neglected it and those who have put the years in to make it happen and the money it took to make it happen.”

Little said the skate park is fundraising for phase three of the project is underway and the group is a little over $9,000 away from their goal of $100,000.

This third phase will bring a large pool for skaters along with a pair of clover bowls, a unique feature for a Midwest skate park, according to Little.

Little said even though they have donated funds for phase three, the group does not have funding for maintenance.

Murphy said the city has proposed $50,000 allocated for phase three of the skate park in the 2022 budget, but it is unclear if it will be approved by the common council as it goes through the budget process for next year.

Murphy added the city budget is scheduled to be adopted at the second common council meeting in November, which is Nov. 23.

Little said he does think the city will be able to allocate $50,000 to the skate park in November

“I’d be happy if we were able to get $30,000 and get the park up to proper maintenance. Then we could start fresh as a reset point with the city and the skate park,” Little said. “My concern is that if the city and skate park don’t get on the same page it could take years to finish this project that we are so close to finishing.”

Agreement between the City of Portage and the Portage Family Skate Park.

Alex Meiller lines up his next trick at the Portage Family Skate Park on Monday afternoon.

Portage Family Skate Park president Kyle Little spends a few minutes cleaning up debris at Goodyear Park back in March He said his team takes no more than 30 minutes to clean up mostly water bottles and soda cans.