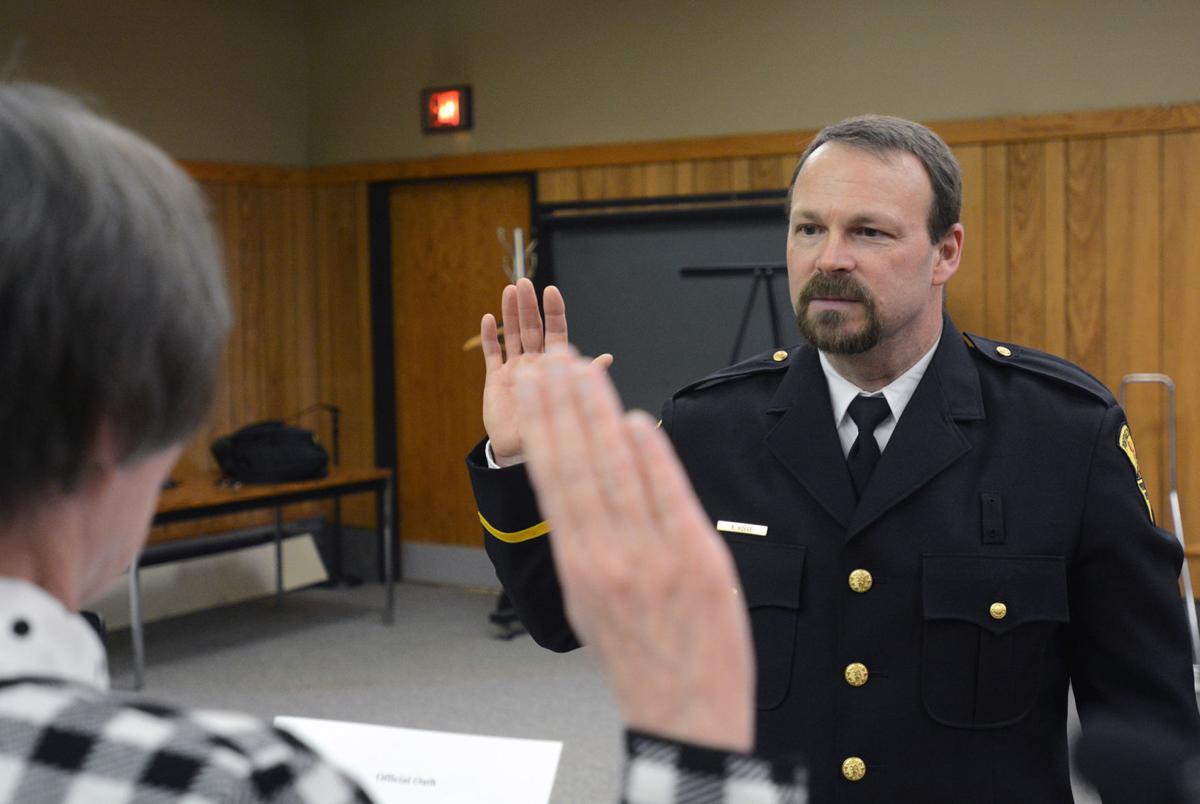 Rich Hoege takes the oath to serve as assistant chief of the Portage Police Department, which was administered by City Clerk Marie Moe during Hoege's swearing-in ceremony Monday at Portage City Hall. 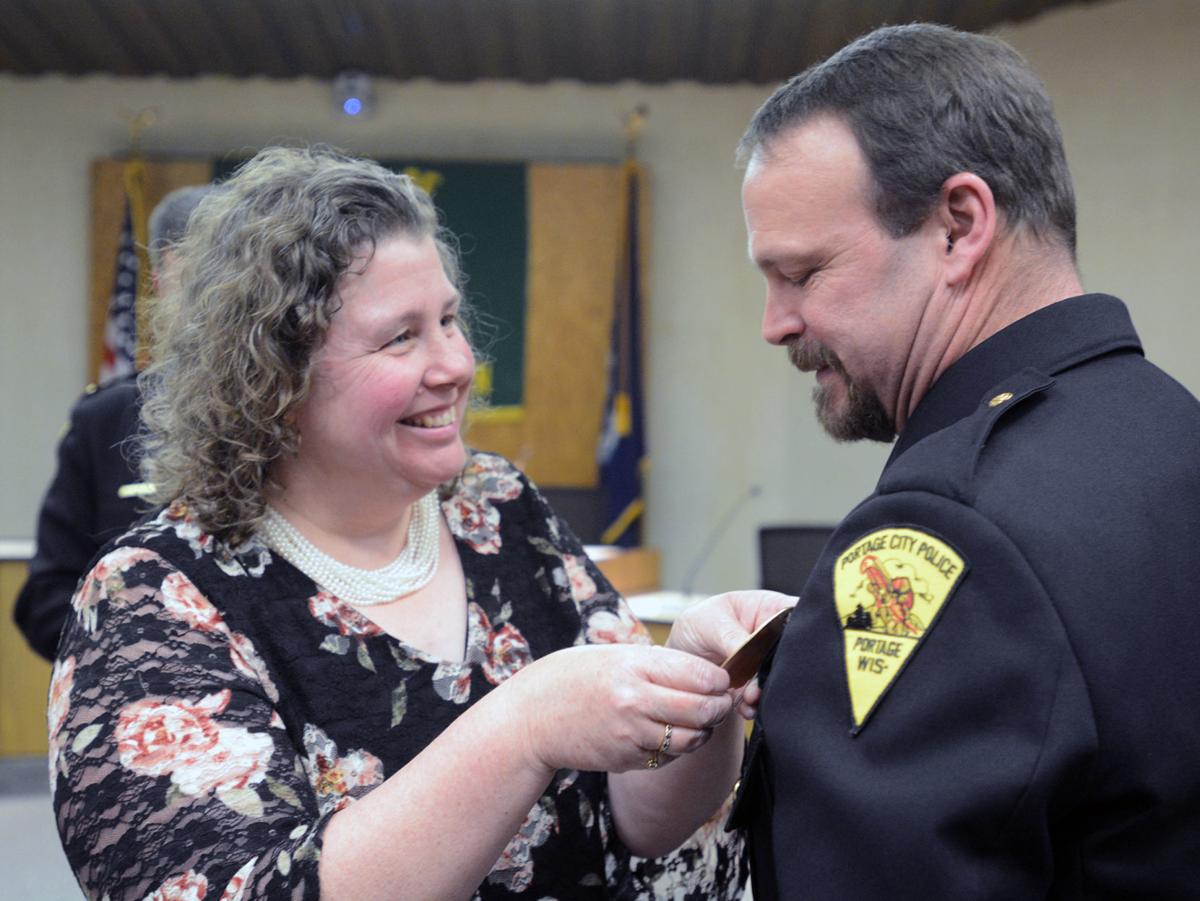 Newly sworn-in Portage Assistant Chief of Police Rich Hoege jokes with his wife, Gayle Hoege, as she pins his badge to his uniform Monday at City Hall.

Portage Assistant Chief of Police Rich Hoege was lauded Monday during his swearing-in ceremony as a mentor, a role model who has spent much of his nearly three decades in law enforcement teaching others.

But when it came to his turn at the podium, Hoege said those around him have taught him just as much, whether it was through kindness, patience or acceptance.

“Along the way, I learned a lot from each and every one of you,” Hoege said.

Hoege fills the position left vacant by Chief Keith Klafke, who was sworn into his role Thursday. Klafke directly addressed Hoege in his own remarks, noting his confidence in the role Hoege will play in his plans for the future of the department.

“I know that you’re going to do an outstanding job,” Klafke said.

For more than 29 years, Hoege has served in local law enforcement. He began as a Columbia County sheriff’s deputy in 1981. He was promoted within the department to sergeant and lieutenant and was the county contact for the village of Pardeeville. Hoege served as an instructor of multiple subjects, like firearms, and was the commander for the county emergency response team.

“You have always been a teacher and a leader,” Klafke said. “Your leadership presence resonated wherever you were.”

One of the people Hoege taught in his time as a sergeant was Lake Delton police officer Bill Laughlin, who joked about their receding hairlines as he remarked on the years of their service. When a motto, “Always add value,” was presented to him, Laughlin said one person was at the forefront of his mind.

“I couldn’t think of a person in my personal, or my work sphere for that matter, who adds value to more lives than Rich Hoege,” Laughlin said.

Hoege said he had found a family at the sheriff’s office. When a bad injury sent him to the hospital, Hoege said his fellow officers arranged childcare and showed up at their home, keeping Hoege’s wife, Gayle, calm while informing her that they would need to ride in an ambulance to Madison.

When he applied for the position of patrol lieutenant at the Portage Police Department in 2016, Hoege said he worried he may never have that familial connection again. When he needed a surgery, one that might end his law enforcement career, he felt accepted as he discussed it with former Chief Ken Manthey, Klafke and City Administrator Shawn Murphy.

“I got adopted into a new family in a pretty significant way, and you take care of me much like the sheriff’s department did through that whole process,” Hoege said. “I truly appreciate that.”

There will be new ideas and plans to execute, Hoege said as he reflected on the recent week of celebrations of officers coming and going from the department. The goal will be to work together with what he called an “exceptional” staff “the whole way up” to ensure the department maintains and exceeds expectations.

“Today is as much about me as about you, because we’ve celebrated now the accomplishments and the great things Chief Ken Manthey has done, but there’s a new era here,” Hoege said. “He’s one person out of our team; he’s a coach and we’ve got a new coach now. … The coach can make the plays, but it’s up to the players to execute them. It’s up to the players to win the games.”

From playing bagpipes to laying sandbags to prevent flooding in Pardeeville, speakers noted that Hoege has contributed greatly to his community. Klafke said Hoege is the epitome of integrity and professionalism. He also gets things done, Klafke added.

“All great leaders inspire people, but they also know they have to rely on others and surround themselves with great people,” Klafke said. “Our department and I will rely on you as a sound leader and mentor.”

Rich Hoege takes the oath to serve as assistant chief of the Portage Police Department, which was administered by City Clerk Marie Moe during Hoege's swearing-in ceremony Monday at Portage City Hall.

Newly sworn-in Portage Assistant Chief of Police Rich Hoege jokes with his wife, Gayle Hoege, as she pins his badge to his uniform Monday at City Hall.