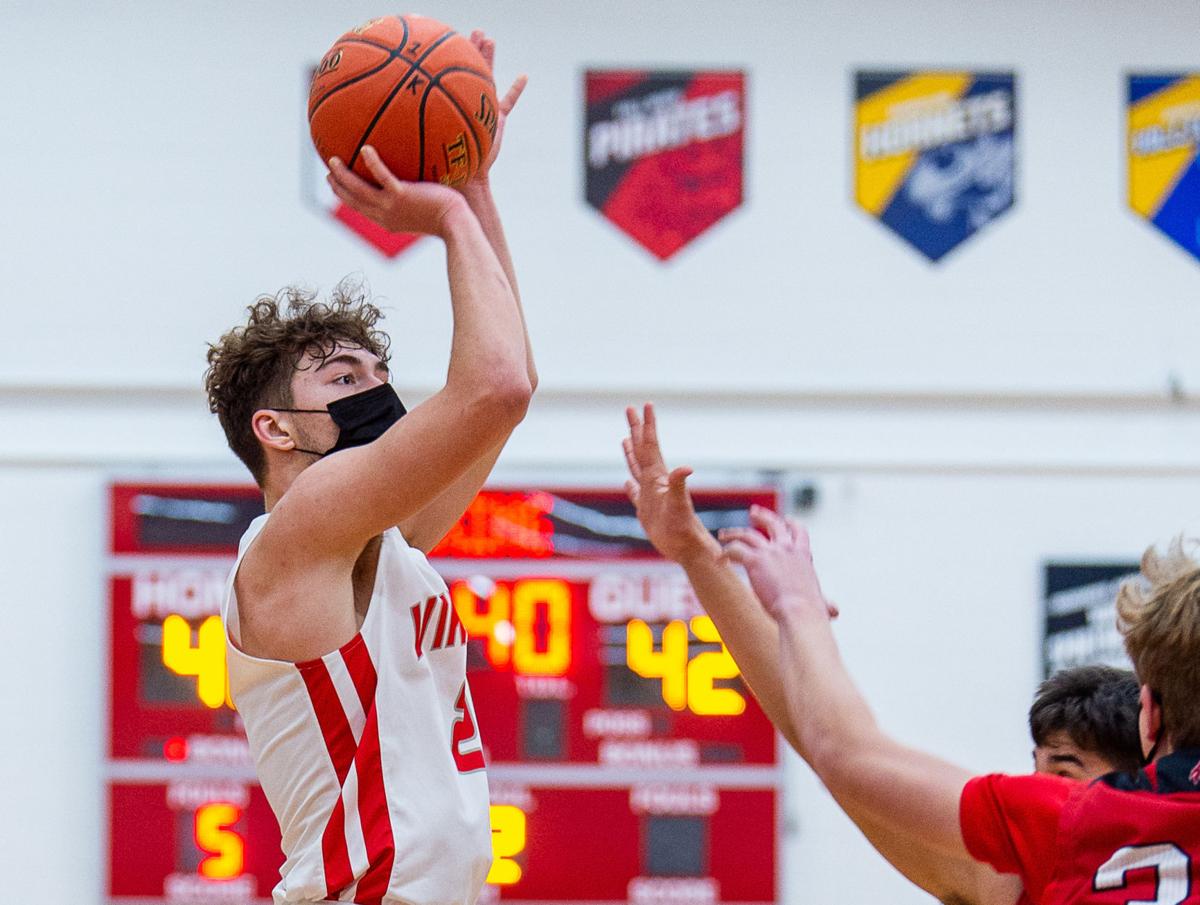 Rio senior Jacob Rowe rises for a 3-pointer over a pair of Fall River defenders during Saturday's non-conference game at Rio High School. The 6-foot-4 wing's 3-pointer helped him surpass the career 1,000 point mark as he poured in 35 points in the 69-49 win over the Pirates. 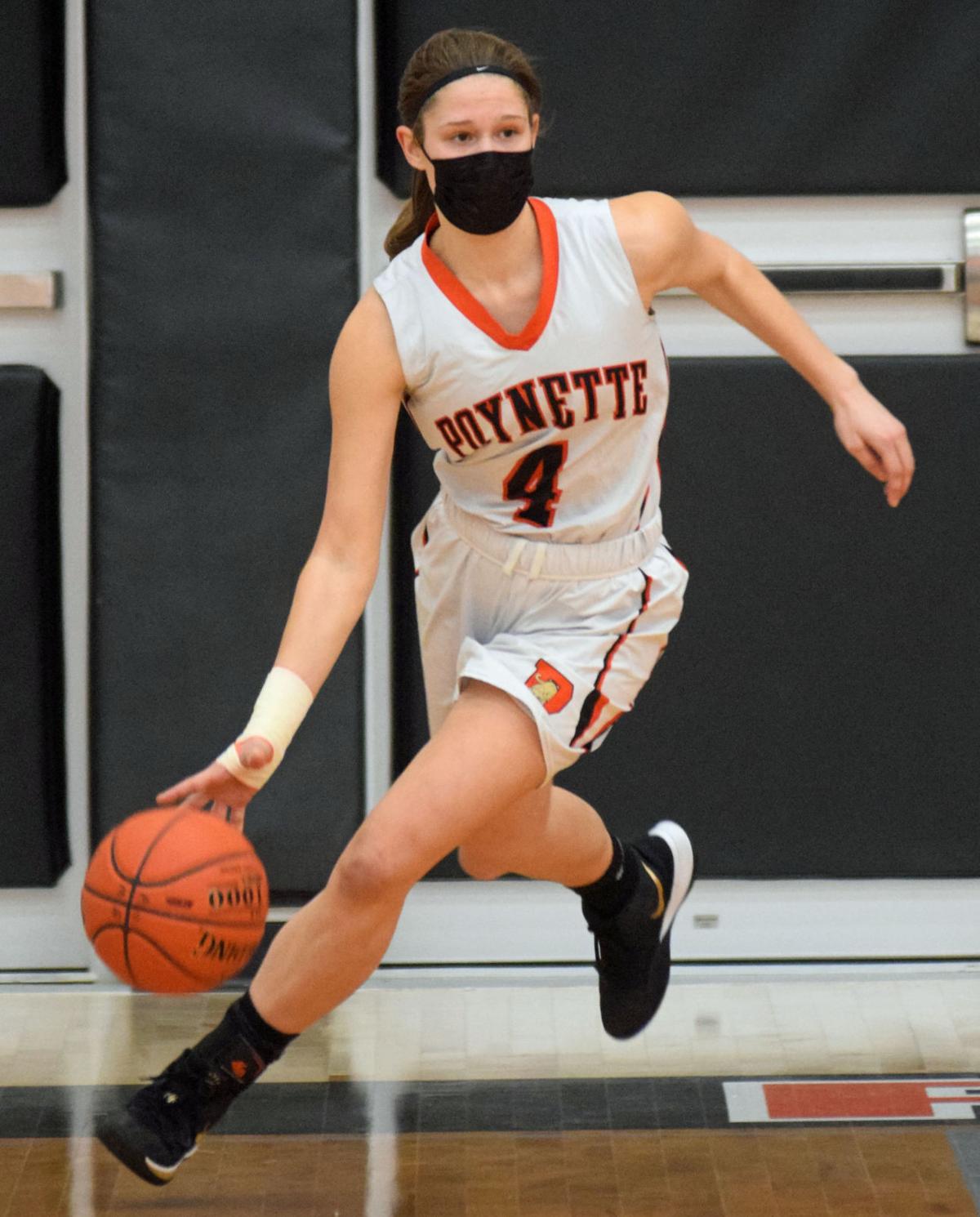 Poynette senior Megan Reddeman charges up court during Friday's non-conference win over Portage. Reddeman scored a team-high 14 points as the Pumas edged out Baraboo, 72-66, on Saturday for their fifth win in six games. 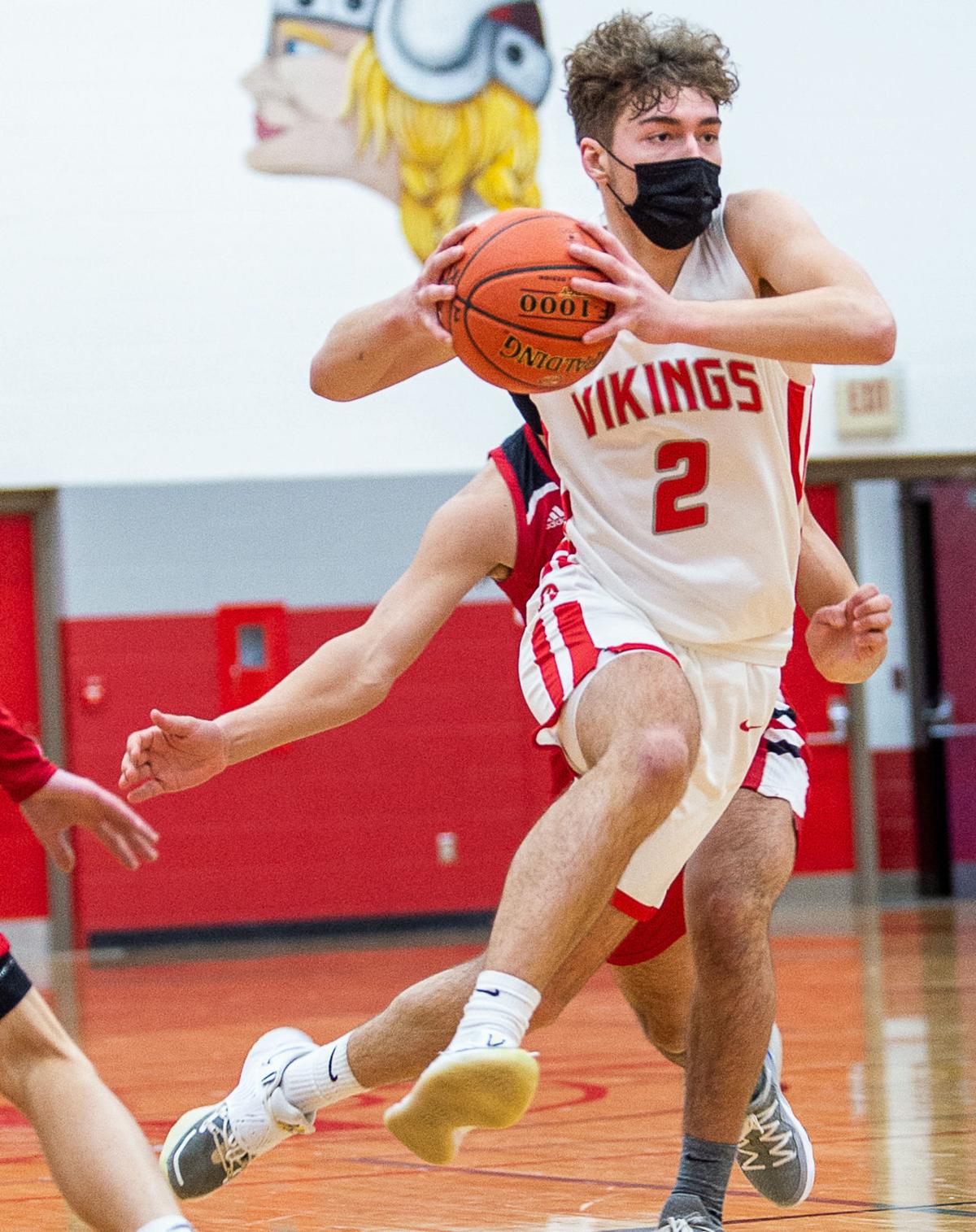 Rio senior Jacob Rowe drives the lane for a layup during Saturday's 69-49 win over Fall River. The 6-foot-4 wing's 3-pointer helped him surpass the career 1,000-point mark, as he poured in 35 points in the 69-49 win over the Pirates.

The senior did so with time to spare — and in emphatic fashion — on Saturday, pouring in a game-high 35 points to help lead the Vikings to a 69-49 win over Fall River. Rowe, who needed 30 points following a 22-point performance in Thursday night’s loss against Cambria-Friesland, buried six of Rio’s 12 3-pointers to help the Vikings improve to 9-6.

The final of Rowe’s half dozen triples helped put him over the mark as Rio pulled away from the Pirates after leading 30-24 at halftime. Rowe, a 6-foot-4 wing, was zeroed in on the bottom of the net during the first half, scoring 20 points, including five 3-pointers, to help the Vikings to their six-point cushion at the break.

Rio got key contributions throughout the second half, including 15 points from senior Pierson Schneider, who finished his night with 20 points and four triples. Barrett Nelson led Fall River with 17 points while Clay Blevins added 11, but no other Pirates scored more than six.

Rio, winners of four of their last five games, will look to stay hot Thursday when it travels to Markesan. The Vikings are shooting for a season sweep over the Hornets after picking up a 68-53 win in their season opener.

A short turnaround couldn’t stop the Poynette girls basketball team from continuing its hot streak, as the Pumas rallied past Baraboo for a 72-66 non-conference win on Saturday.

Senior Megan Reddeman scored 14 points and was one of three Pumas in double figures as Poynette (5-6) rode its depth to a fifth win in their last six games. The Pumas, coming off consecutive games in back-to-back nights, showed some weariness in the first half as they trailed the T-Birds (2-14) by four at the break.

Poynette found its footing in the second half, however, pouring in 42 points to race past the T-Birds. Junior Rachel Yelk added 13 points and senior Katelyn Chadwick chipped in 12 as four other players added six points apiece for the Pumas, who made 11 3-pointers.

Poynette’s depth was enough to overcome Baraboo’s top duo of senior Maya White Eagle and sophomore Taylor Pfaff, who scored 33 and 21 points, respectively. The Pumas will try to pull even at .500 on the year when they travel to Wautoma on Monday for the second game of a four-game road trip.

In the midst of a three-game losing skid, the Lodi girls basketball team was unable to get off the schneid on Saturday as the Blue Devils fell 71-60 against Reedsburg in non-conference action.

Junior Ella Puls scored a team-high 15 points but was just one of two Lodi players in double figures as its upset bid of the Beavers, ranked No. 3 in Division 2 in the latest Associated Press poll, fell short. Reedsburg (12-1) inched ahead at the break as it took a 37-29 lead at halftime.

From there, the Beavers countered every punch thrown by the Blue Devils (3-8) and snuffed out any sort of rally attempt. Reedsburg junior Trenna Cherney scored a game-high 20 points, while freshman Sydney Cherney added 17 and junior Mahra Wieman chipped in 13.

Senior Lauryn Milne added 11 for Lodi, which will try to get out of its funk on Tuesday at Columbus.

Coming off a strong defensive performance on Thursday, the Cambria-Friesland boys basketball team needed every ounce of offense on Saturday to edge out a 65-58 win over Markesan.

Senior Kobe Smit was one of three CF players in double figures, scoring a team-high 20 points as the Toppers finished off a regular-season sweep of the Hornets. Following its 16-point win earlier in the year, Cambria-Friesland (13-3) got all it could handle from Markesan in the opening half as the teams went into halftime knotted at 30.

The Toppers pulled away down the stretch, however, inching away to prick the Hornets. Seniors Cade Burmania and Griffin Hart added 15 and 14 points, respectively, for CF and junior Owen Jones chipped in nine.

Cambria-Friesland will aim for a sixth win in their last seven games when it hosts Dodgeland on Monday.

When the Rio and Pardeeville girls basketball teams met on Jan. 16, it was all Vikings as Rio rolled to a 20-point victory.

The Bulldogs had much more bark in them Saturday, but they couldn’t bite down on the Vikings as Rio held serve in the second half for a 49-46 win in non-conference action. Savannah Manthey scored a game-high 24 points, but she was the lone Bulldog in double figures while Kayla Staveness led the Vikings with 18.

The dueling juniors torched the nets from behind the arc, with Staveness burying six of Rio’s seven 3-pointers and Manthey notching five of her own. After trailing 25-18 at halftime, Pardeeville (7-8) began to rev things, but the seven-point hole was too much to overcome.

Senior Adeline Hutzler added 12 points for the Vikings (9-4), including eight in the second half, to help put the game on ice. Both teams return to action Tuesday, when Rio hosts Princeton/Green Lake and Pardeeville heads to Fall River.

Junior Brady Ring scored a game-high 17 points, including making five of Lodi’s 11 3-pointers, but it wasn’t enough to help Lodi avoid losing for the third time in its last four games. The Blue Devils (6-4) were right with the Phoenix throughout the first half, trailing just 26-24 at the break.

However, Luther Prep stayed hot enough down the home stretch to ultimately burn the Blue Devils. Lodi, which got eight points from junior Erik Lincoln, will try to get back into the win column when it travels to Columbus on Monday in a match-up of teams looking for their first Capitol North Conference wins.

The Montello girls basketball team is still searching for its first win of the year after suffering a 51-33 loss to Dodgeland in a non-conference tilt on Saturday.

Senior Emme Urbaniak scored a team-high 12 points, but she was the lone Hilltopper to score six or more as Montello fell to 0-13 on the year. A slow start sunk the Hilltoppers, as they mustered just 14 points in the first half as the Trojans took a 12-point lead into the break.

Dodgeland (7-8) kept its foot on the gas in the second half, thanks in part to Brielle Blome’s eight points, to put away the Toppers. Miranda Firari led all scorers with 14 points, including three 3-pointers, and Adrianne Bader added 12 for the Trojans.

Montello, which got six from senior Abby Bond, will head to Markesan on Tuesday.

Watch now: Badgers coach Tony Granato looks ahead to the final weekend of the regular season

Watch now: Badgers coach Tony Granato looks ahead to the final weekend of the regular season

POYNETTE — With a fourth different coach in four years, the Poynette girls basketball team had another overhaul on its hands this winter.

CAMBRIA — If the COVID-19 pandemic has taught teams anything, it’s been to stay on your toes.

The prep basketball season has looked unlike anything else this season thanks to the COVID-19 pandemic.

As just a freshman, Westfield’s Carly Drew has quickly made waves throughout the area and South Central Conference as one of its top scorers, …

PREP BOYS BASKETBALL: Former teammates enjoying success against each other in Trailways West

While youth sports are a time for teaching kids skills and building appreciation for various athletics, it’s also a chance to cultivate long-l…

POYNETTE — After giving up 62 points per game last season, improving on defense was one of the top emphases for Poynette boys basketball coach…

Rio senior Jacob Rowe rises for a 3-pointer over a pair of Fall River defenders during Saturday's non-conference game at Rio High School. The 6-foot-4 wing's 3-pointer helped him surpass the career 1,000 point mark as he poured in 35 points in the 69-49 win over the Pirates.

Poynette senior Megan Reddeman charges up court during Friday's non-conference win over Portage. Reddeman scored a team-high 14 points as the Pumas edged out Baraboo, 72-66, on Saturday for their fifth win in six games.

Rio senior Jacob Rowe drives the lane for a layup during Saturday's 69-49 win over Fall River. The 6-foot-4 wing's 3-pointer helped him surpass the career 1,000-point mark, as he poured in 35 points in the 69-49 win over the Pirates.