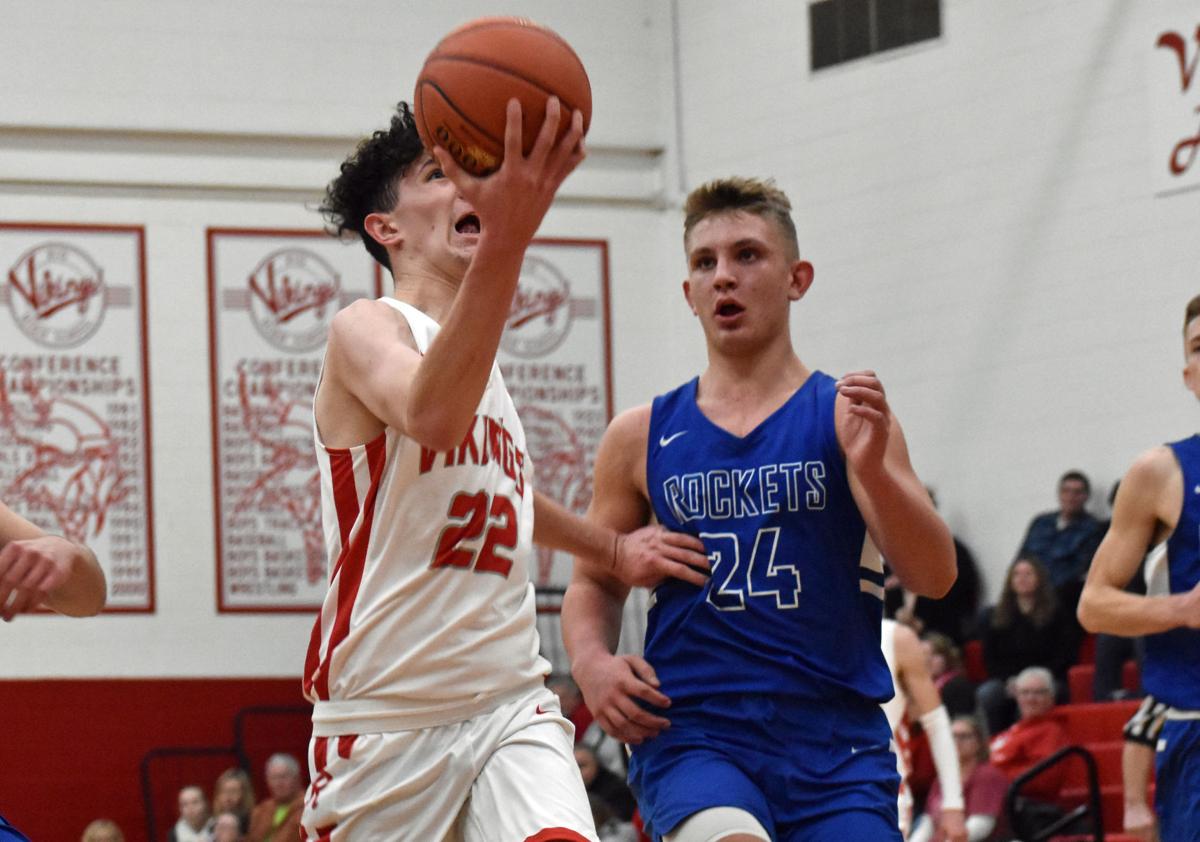 Rio junior Pierson Schneider goes to the basket while Randolph sophomore Travis Alvin defends in the first half of a Trailways West Conference game in Rio on Thursday. 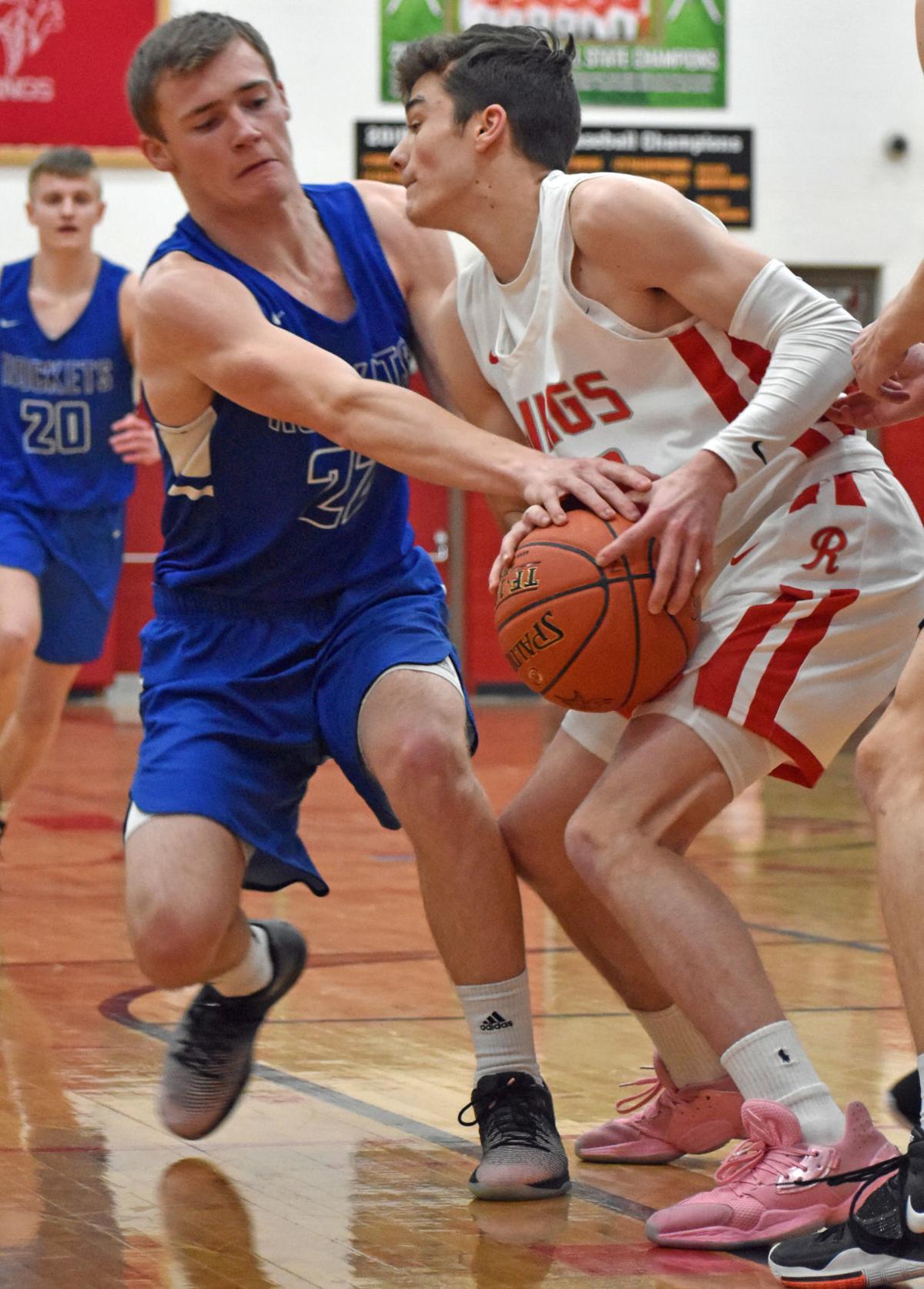 Randolph junior Brayden Haffele tries to take the ball from Rio senior Carson Richarson in the first half of a Trailways West Conference game in Rio on Thursday. 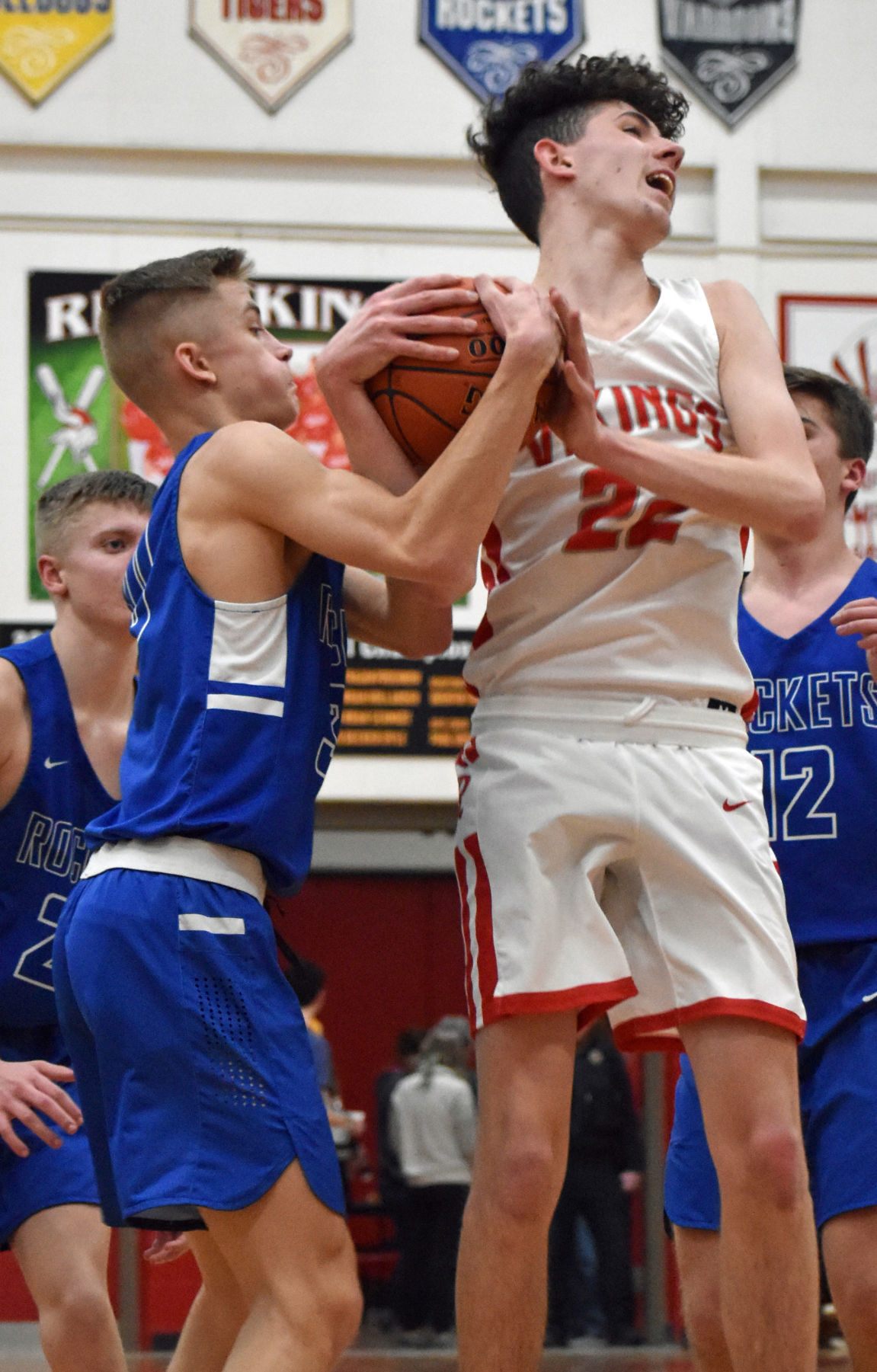 Randolph junior Peyton Moldenhauer and Rio junior Pierson Schneider battle for the ball in the first half in Rio on Thursday.

RIO — It might not seem fair to call a single 3-point basket at the end of the first half a turning point in what would end up being an 18-point game, but when Randolph junior Peyton Moldenhauer banked in a desperation heave from well behind the 3-point line in the final seconds of the first half, it took air out of Rio’s balloon.

The bucket by Moldenhauer came just two possessions after Rio had a chance to tie the game, and gave the Rockets a six-point lead at the break on their way to a convincing 63-45 victory over the host Vikings in a Trailways West Conference game on Thursday night in Rio.

Rio (10-9, 6-6 Trailways West) trailed for almost the entire first half, but was able to pull within 25-24 on a 3-pointer from junior Pierson Schneider with 1 minutes, 20 seconds left in the first half. On Rio’s next possession, it had a chance to take its first lead since the opening minute of the game, but couldn’t convert.

Randolph (18-1, 12-0) then went up 27-24 on a pair of free throws by Moldenhauer with 42 seconds left in the half, and then went into the break flying sky high after Moldenhauer found a way to can a 3-pointer over a Rio defender just before the halftime buzzer.

“Walking into the locker room it felt that way. I think it took the wind out of our sail a little bit,” Struck said. “We kind of had the question a little bit of when you’re facing a good team like that, what else can happen to put you down? I think that hurt us a little bit and we just didn’t quite respond.”

Randolph coach Tyler Fischer wasn’t exactly pleased with the moments that led to Moldenhauer’s 3-pointer, but couldn’t deny the boost it gave his team.

“That was not what we drew up and not what we called,” Fischer said. “We did not execute the play we actually wanted, but from the players’ standpoint, I think that gave them a little fire going into the half, and that always helps.”

If Moldenhauer’s 3-pointer wasn’t the dagger that finished off the Vikings, what happened next certainly was.

The Rockets opened the second half on an 11-0 run, which included back-to-back buckets from sophomore Travis Alvin, who finished with 17 points, and then a 3-pointer and a jumper from Moldenhauer, who led the Rockets with 22 points.

Schneider finally ended the run with a pair of free throws, but Randolph followed that up with seven straight points to make it an 18-2 run, giving them a 46-28 lead with 10:00 remaining.

On offense, the Vikings were a two-man show, as Schneider (22 points) and fellow junior Jacob Rowe (21 points) combined to score 43 of Rio’s 45 points on the night. Schneider and Rowe were almost responsible for all of their team’s points, as freshman Tyson Prochnow scored a layup with just 10 seconds left in the game to provide the only Rio points of the night that didn’t come from Schneider and Rowe.

“They’re going to focus on (Schneider and Rowe) and we need our other guys to have a few points here and there,” Struck said. “Unfortunately tonight, the shots didn’t fall. We got looks and we put them up. When you shoot under 30%, you’re not going to win a lot of game, especially against a good team.”

Rio did hit some shots in the first half. A turnaround jumper and then a steal and layup by Rowe cut Randolph’s lead to 22-19 with 2:45 left in the first half. Then Schneider went on a personal 5-0 run to cut the lead down to 25-24 late in the half before the Rockets were able to blast off on Moldenhauer’s 3-pointer.

Struck said his team did some good things to keep the Rockets within striking distance early.

“Defensively we pushed up a little bit and we stepped in driving lanes, which is what we knew we had to do,” Struck said. “Offensively, we focused on getting players shots where they can make them. Not just settling for open quick ones, but getting our players in correct spots and it go us some good looks.”

With the win, Randolph clinches at least a share of the Trailways West Conference championship. The Rockets can win the title outright by winning next Tuesday at home against Markesan, or next Friday at home against Cambria-Friesland.

And while Randolph winning the league crown was almost certainly going to happen with the Rockets two games ahead of Markesan entering the night, it doesn’t mean it wasn’t going to celebrate the moment.

“There is only one senior on this team, so it’s still a young group. So for them, a conference championship is still a big deal,” Fischer said. “It’s not like the old days. So these guys are very excited for that, so that’s good.”

Rio junior Pierson Schneider goes to the basket while Randolph sophomore Travis Alvin defends in the first half of a Trailways West Conference game in Rio on Thursday.

Randolph junior Brayden Haffele tries to take the ball from Rio senior Carson Richarson in the first half of a Trailways West Conference game in Rio on Thursday.

Randolph junior Peyton Moldenhauer and Rio junior Pierson Schneider battle for the ball in the first half in Rio on Thursday.