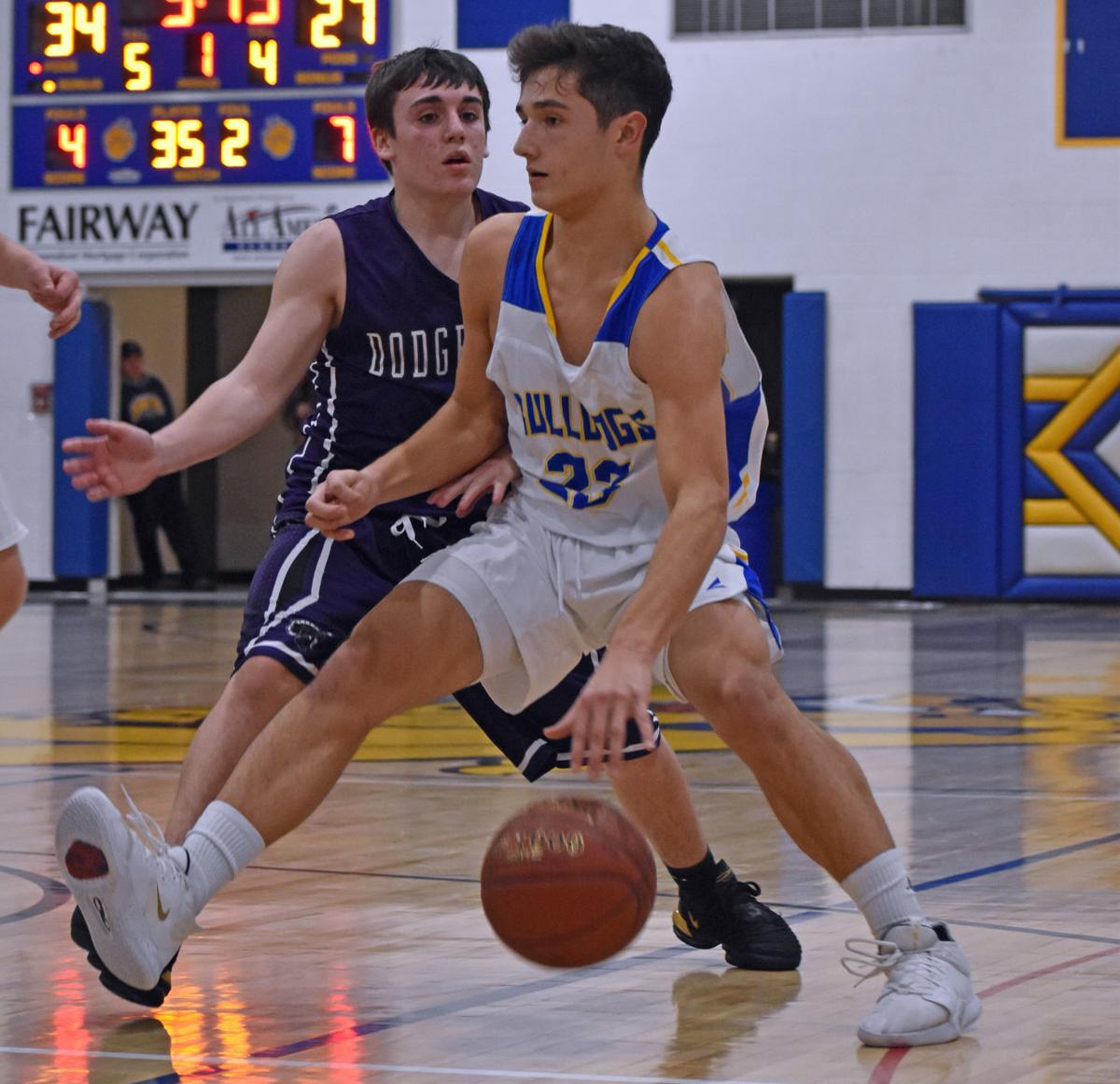 Pardeeville sophomore Derek Lindert is defended by Dodgeland junior Sy Otte in the first half of a non-conference game in Pardeeville on Monday. 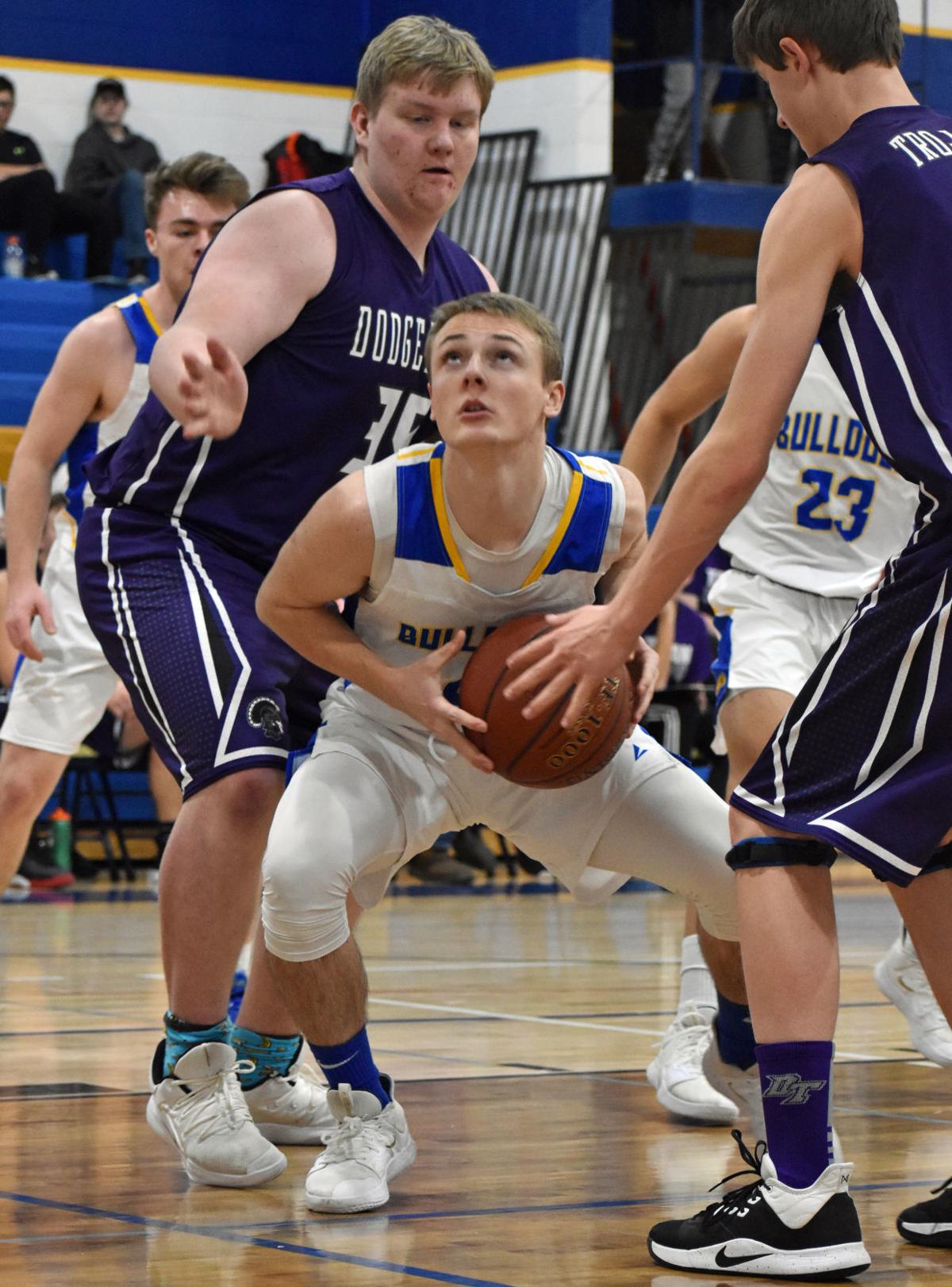 Pardeeville senior Dustin Brodie looks to score in front of Dodgeland junior Alex Nelson in the first half of a non-conference game in Pardeeville on Monday.

PARDEEVILLE – Pardeeville’s Derek Lindert came into Monday’s non-conference game with Dodgeland having scored over 30 points in three of the last four games.

The sophomore guard made it four of the last five games that he’s cleared the 30-point mark, as he poured in a game-high 32 points to lead the Bulldogs to an 82-50 victory over the Trojans at Pardeeville High School.

Lindert didn’t waste any time. After Dodgeland scored the first points of the night on a bucket by senior Seth Christopherson, Lindert went on a personal 10-0 scoring run to give his team a 10-2 lead. The spurt opened with back-to-back 3-pointers.

“He’s getting some shots and starting to feel a little bit better,” Pardeeville coach Chris Lindert said of Derek’s hot streak, which includes a season-high 35 points in Friday’s win over Princeton/Green Lake. “He’s getting opportunities and putting them in.”

Pardeeville (7-3) threatened to put the game away early when senior J.T. Fitzgibbon made the first of his three 3-pointers to give Pardeeville a 15-4 lead just over 4 minutes into the first half, but the Trojans weren’t about to give up.

Christopherson, who led Dodgeland with 13 points, answered with a 3-pointer from the left wing, sparking a 9-2 run, that also included buckets from juniors Dilan Fenner and Alex Nelson, trimming the Pardeeville lead to 17-13 with 11:37 left in the half.

Dodgeland (4-7) got to within 29-27 on a layup by Fenner with 4:40 to play in the half. After the bucket, Dodgeland coach Bill Otte called a timeout to give his Trojans a quick breather.

Dodgeland may have caught its breath, but so did Pardeeville. The Bulldogs came out of the break and went on an 11-0 run that put the Trojans into a 40-27 hole. Lindert’s layup started the key run, but it also included five points from junior Peter Freye and another 3-pointer from Fitzgibbon.

“They just kept running what they were doing and they were just hitting shots. They got into a rhythm and we took a timeout,” Otte said. “They went on a little bit of a run after that timeout. We were starting to get a little bit fatigued.”

Dodgeland stopped the run when Fenner banked in a 3-pointer, but Pardeeville finished the half with a 5-0 that included a pair of buckets by junior Tyler Schommer to take a 45-30 lead into the half.

Things went from bad to worse for Dodgeland in the second half, as sophomore Jace Christopherson had to be carried off the floor with a lower-leg injury, making the already thin Trojans even thinner.

Pardeeville scored 17 of the first 20 points in the second half to take a commanding 62-33 lead. Then down the stretch, junior Nic Burns heated up for the Bulldogs. He scored seven straight points during one stretch on his way to a 16-point night.

Chris Lindert said his team was able to stretch its lead out by finally getting some stops on the defensive end, and then was able to move the ball around to find open looks.

“Our offense is good when we have some nice ball movement,” Lindert said. “We preach inside touches and when we do that, we seem to get better shots, and not just for Derek, but for J.T. and Peter and some of the other guys.”

And while the game got away from the Trojans in the second half, Otte was happy with the way his team continued to play hard.

“We aren’t going to give up. You could see that at the end. The guys that are out there are going to be fighting. They’re going to be fighting the whole time,” Otte said. “Hands-on defense, there were times where we did a nice job of disrupting pass lanes and stuff like that. It’s got get there. It’s getting better and better with every game.”

WONEWOC — Well into the second half against Brookwood, Wonewoc-Center looked to be in prime position to score its first conference win of the …

Pardeeville sophomore Derek Lindert is defended by Dodgeland junior Sy Otte in the first half of a non-conference game in Pardeeville on Monday.

Pardeeville senior Dustin Brodie looks to score in front of Dodgeland junior Alex Nelson in the first half of a non-conference game in Pardeeville on Monday.