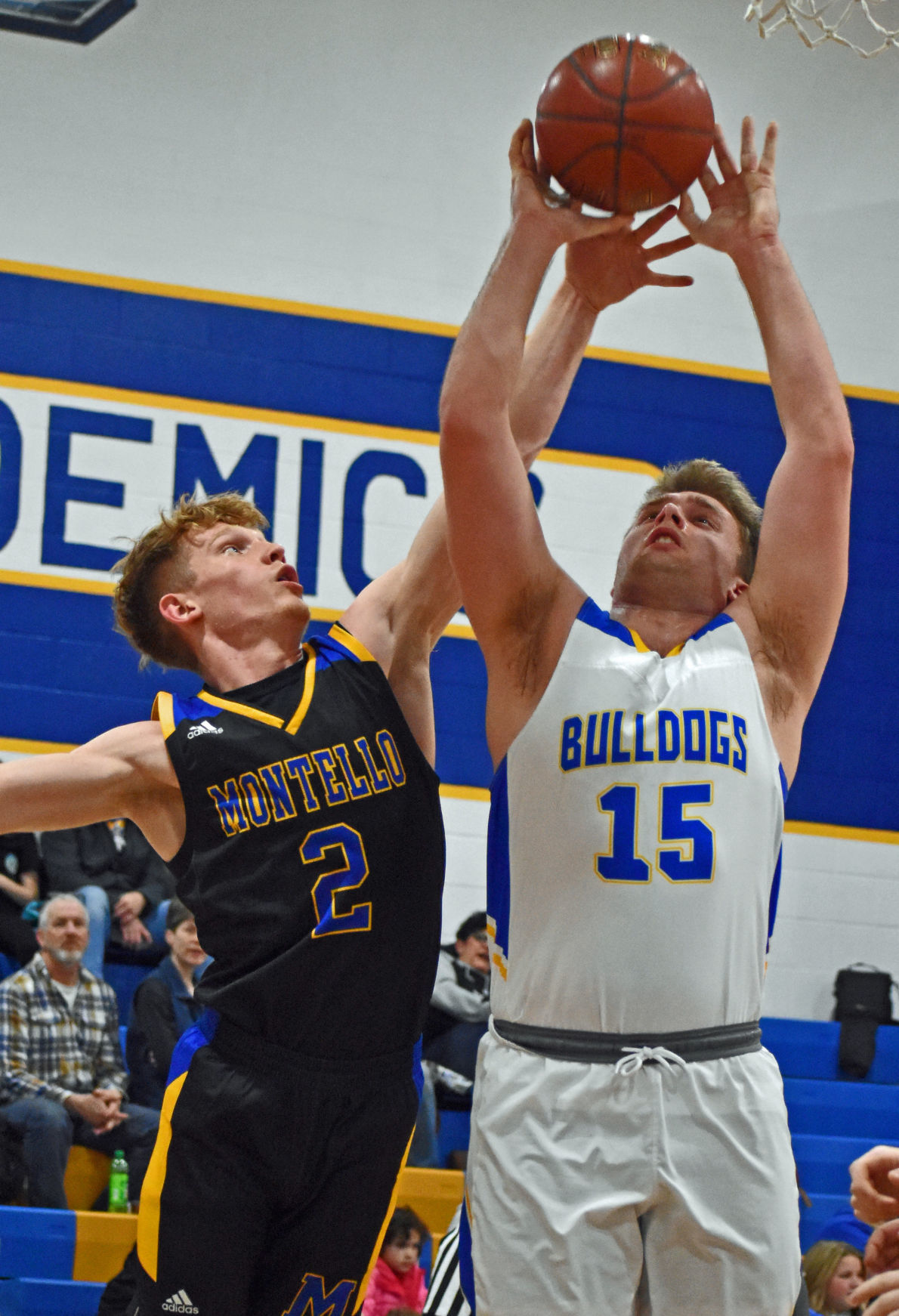 Pardeeville senior James Thrams puts up a shot in front of Montello senior Abe Postler in the first half of a Trailways West Conference game in Pardeeville on Friday. 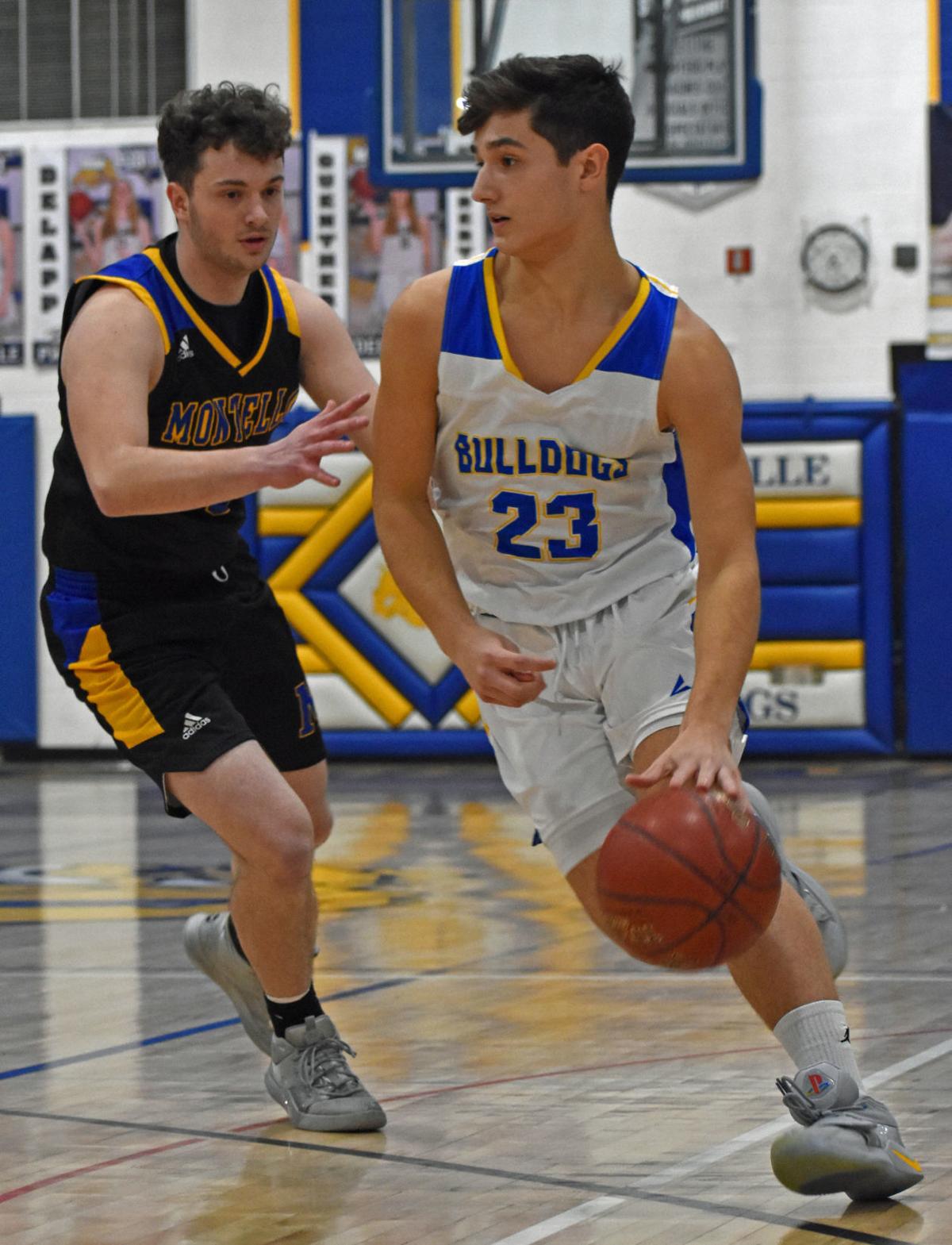 Pardeeville sophomore Derek Lindert drives against Montello senior Donovan Kendall in the first half of a Trailways West Conference game in Pardeeville on Friday.

PARDEEVILLE — For the first 10 minutes of the first half, Montello and Pardeeville traded blows in what was shaping up to be a back-and-forth game. Then somewhere late in the first half, the switch flipped for the Bulldogs and they took off.

Pardeeville took the lead for good on a 3-pointer by sophomore Derek Lindert with 9 ½ minutes left in the first half, and used a 10-0 run in the final minutes of the half to pull away for an 83-49 victory over the Hilltoppers in a Trailways West Conference game at Pardeeville High School on Friday night.

“We got a couple defensive stops and then got some in transition and a couple easy buckets,” coach Lindert said. “Then we hit a couple 3s and all of sudden (the lead) went from three or four points to 12 or 15 just like that.”

After Derek Lindert, who finished with a game-high 25 points, made the 3-pointer to put Pardeeville (13-7, 9-5) up 19-17, the points started to come easier for the Bulldogs. Derek Lindert would hit a second 3-pointer a few moments later, and then a jumper to give the Bulldogs a 26-19 lead with 5:30 to go in the half.

Montello (4-17, 3-11) briefly stopped the run with a layup from senior Hunter Jones, but Pardeeville wasn’t done. The Bulldogs would go on a 10-0 run, a spurt that included 3-pointers from junior Nic Burns and senior Dustin Brodie, allowing Pardeeville to take a 40-25 lead into the break.

Montello never threatened to close the gap in the second half. Another 10-0 run for Pardeeville allowed it to take a 58-31 lead with 10:01 left in the game.

Pardeeville got a lot of offensive contributions in the win, especially from its seniors, who all started on the team’s senior night. Senior James Thrams finished with 15 points and a team-high 11 rebounds, while Brodie joined his fellow senior in double figures with 10 points.

Pardeeville’s other two healthy seniors — J.T. Fitzgibbon and Riley Lentz — also had their moments. Fitzgibbon made a pair of 3-pointers and finished with nine points, while Lentz had seven points and seven rebounds.

Lentz also got the biggest cheer of the night. The 6-foot-2 big man found himself open at the top of the key late in the game and buried a 3-pointer that gave Pardeeville a 79-44 lead. Thrams, Pardeeville’s other big man, also got to put up a 3-point shot, though it was from much deeper than Lentz’s shot, and it was off the mark.

“It was a good shot. We were trying to get both (Lentz) and Trahms a shot (at a 3-pointer),” Chris Lindert said. “Thrams got his off, but it was a little deep.”

The win was also Chris Lindert’s 200th as a head coach. “I’ve had a lot of good players,” he said when asked what the milestone meant.

Pardeeville finishes out the regular season with a pair of non-conference road games next week. The Bulldogs will play at Belleville on Monday before traveling to Hustisford on Thursday.

Montello will finish the regular season by hosting Madison Abundant Life on Thursday.

In his two years as a high school basketball player, Pardeeville sophomore Derek Lindert has accomplished more than most athletes will accompl…

The Hustisford prep boys basketball team featured one of the best duos in the Trailways East Conference this season, while Central Wisconsin C…

While the games have been shut down due to the coronavirus pandemic, fond memories of the community's love and passion for sports remains strong.

One year after having an injury cut his junior season to just 10 games, Westfield senior Derek Drew bounced back to play a full season and lea…

Pardeeville senior James Thrams puts up a shot in front of Montello senior Abe Postler in the first half of a Trailways West Conference game in Pardeeville on Friday.

Pardeeville sophomore Derek Lindert drives against Montello senior Donovan Kendall in the first half of a Trailways West Conference game in Pardeeville on Friday.