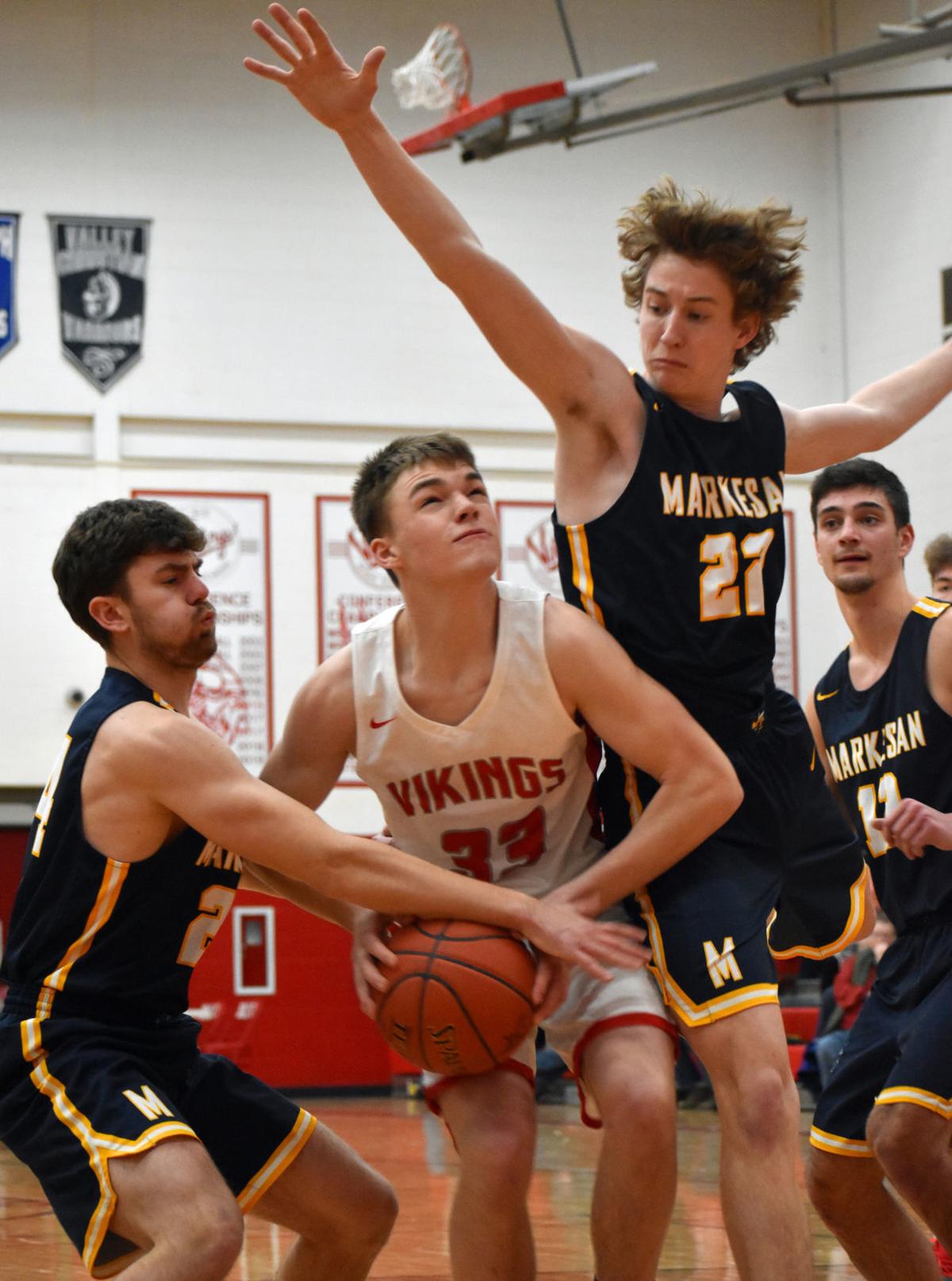 Rio sophomore Gavin Grams looks to score between Markesan junior Bryce Leedle and junior Max Richter in the first half of a Trailways West Conference game in Rio on Tuesday. 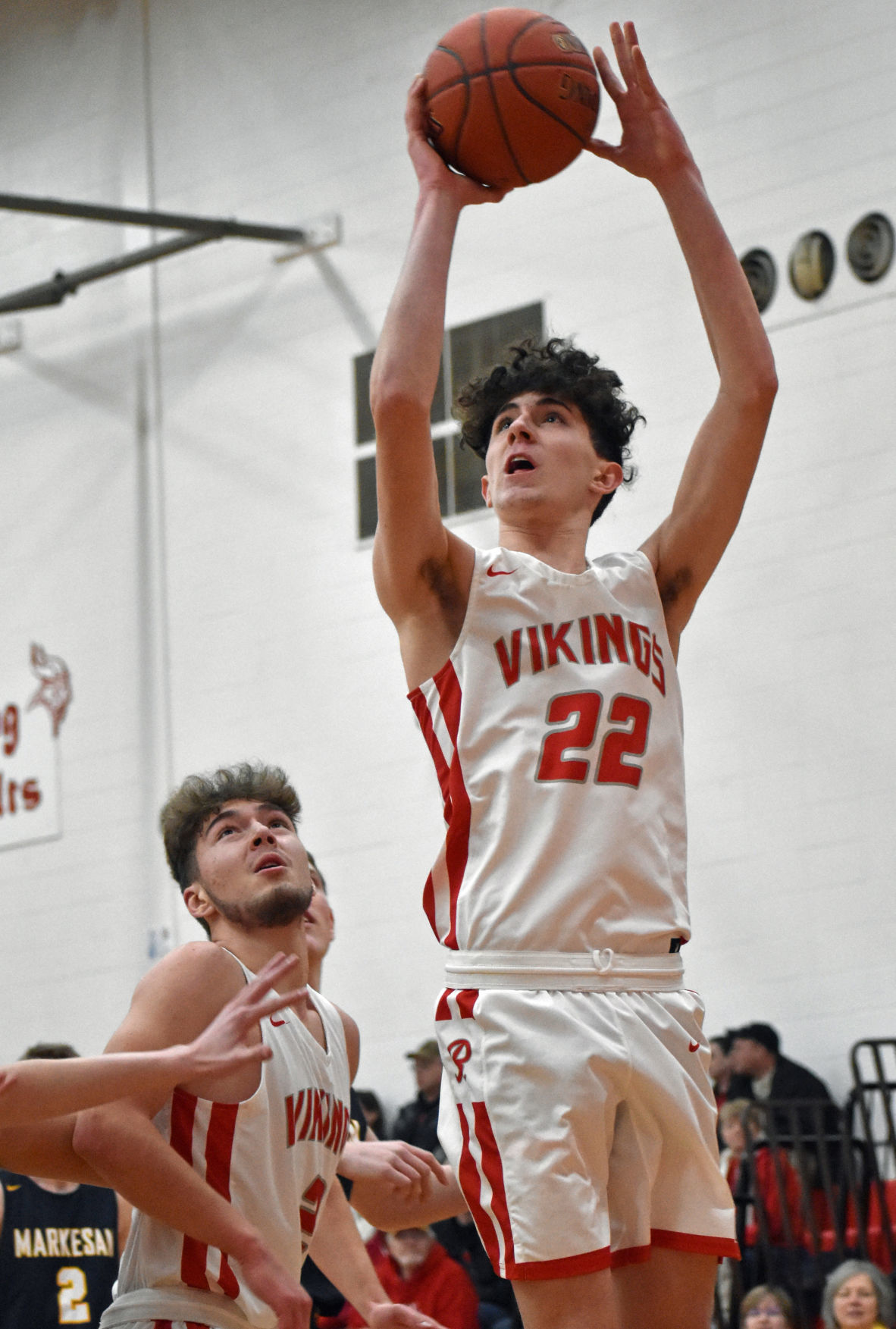 Rio junior Pierson Schneider puts up a shot in the first half of a Trailways West Conference game against Markesan in Rio on Tuesday night.

RIO – Markesan senior guard Bryson Zuhlke only made two 3-pointers in the game, but both came in overtime. The second of those 3-pointers proved to be the game winner, giving the Hornets a 64-63 lead with 11.6 seconds left in the second overtime and lifting them to a 66-63 win over host Rio in a Trailways West Conference game on Tuesday night.

The only points Rio (7-6, 4-3 Trailways West) scored in the second overtime came when junior Jacob Rowe sank a jumper just inside the 3-point arc from atop the key to give the Vikings a 63-61 lead with 32 seconds left. It looked like that bucket might hold up, but Zuhlke answered with a 3-pointer on the other end to put the Hornets in front for good.

After Zuhlke’s 3-pointer gave Markesan the 64-63 lead with 11.6 left, Rio still had a chance to win the game, but senior Dakota Johnson’s baseline jumper with 5 seconds left was off the mark. Markesan rebounded Johnson’s miss and then sealed the win with a pair of free throws from junior James Triggs with 0.7 seconds left.

Rio had a chance to take the lead in the final seconds, but a missed shot and then a Rio turnover gave the ball back to Markesan with 11.4 seconds to go. The Hornets would never get a shot at the go-ahead bucket at the end of regulation though, and the game went to overtime tied at 54.

Rio would take an early lead in the second overtime on a Schneider 3-pointer, and then a 3 from sophomore Cody Bartelt that gave the Vikings a 60-56 lead with 2:50 left.

Zuhlke responded with the first of his big 3-pointers to cut Rio’s lead to 60-59 with 1:10 to go in the first overtime, and would then snuff out Rio’s next offensive opportunity with a blocked shot that gave the ball back to the Hornets.

A pair of free throws from Augustynowicz with 16.2 seconds left gave the Hornets a 61-60 lead. Then on the other end, Rowe missed a 3-pointer with 4 seconds left, but Bartelt got the rebound and was fouled going up for a the game winning shot as the buzzer sounded. That sent Bartelt to the line to shoot a pair of free throws with no time on the clock. He missed the first one, but drilled the second, tying the game at 61 and sending it to a second overtime.

Schneider had the hot hand early for Rio. He made three of his six 3-pointers in the first few minutes, giving Rio a 9-6 lead, and then hit another from long range to put the Vikings up 20-17 with 8:30 left in the first half.

Rio took a 46-39 lead on a layup by Rowe, who finished with 12 points, with 11:35 left in regulation, but the Hornets responded with a 6-0 run to trim Rio’s lead to 46-45. Rio would answer with layups by Rowe and Schneider to go up 50-45, but Markesan scored the next seven, including a 3-pointer from senior Christian Schwandt to take a 52-50 lead.

Rio sophomore Gavin Grams looks to score between Markesan junior Bryce Leedle and junior Max Richter in the first half of a Trailways West Conference game in Rio on Tuesday.

Rio junior Pierson Schneider puts up a shot in the first half of a Trailways West Conference game against Markesan in Rio on Tuesday night.