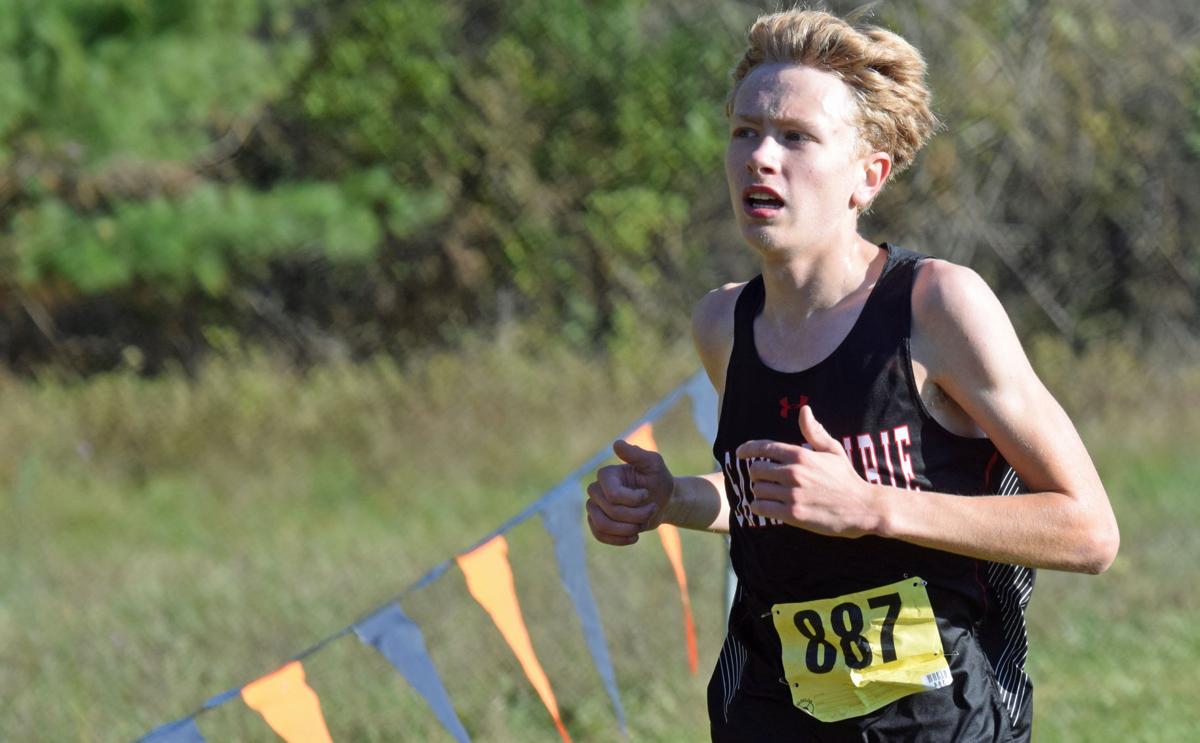 Sauk Prairie's Jack Boerger keeps his eyes on the timer as he approaches the finish line during the boys varsity race at Saturday's Badger West Conference meet at Wyona Park in Wyocena. Boerger won the boys varsity race in a time of 15 minutes, 59.25 seconds and helped lead the Eagles to the team title with 65 points. 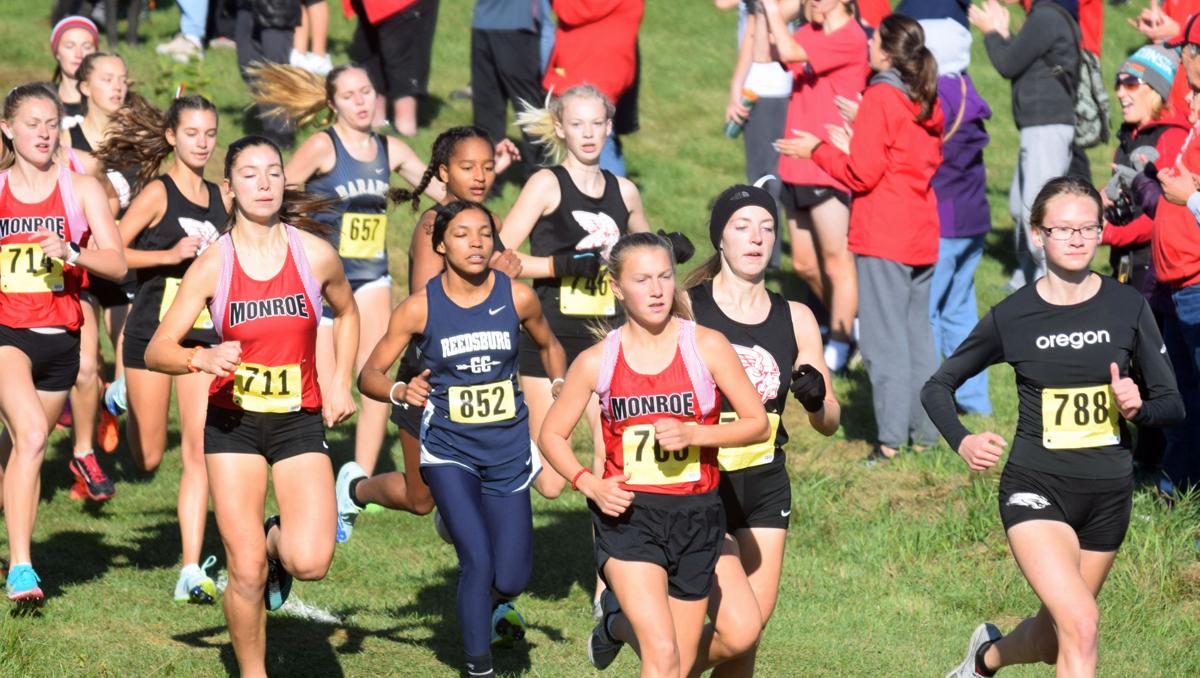 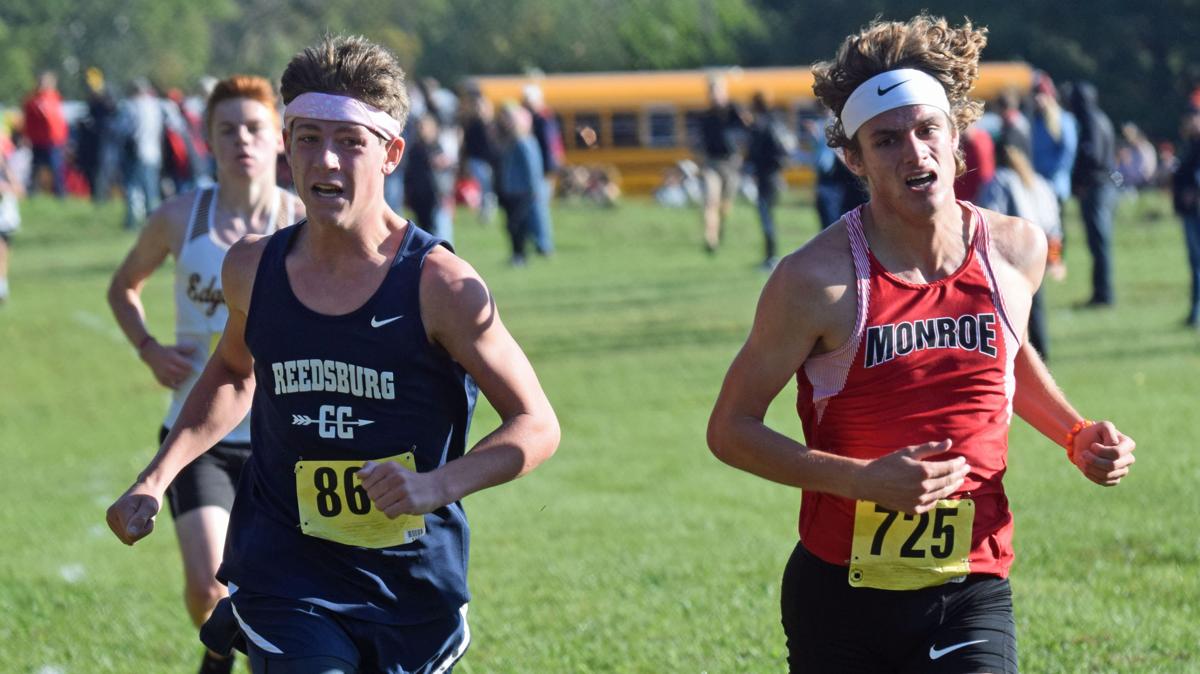 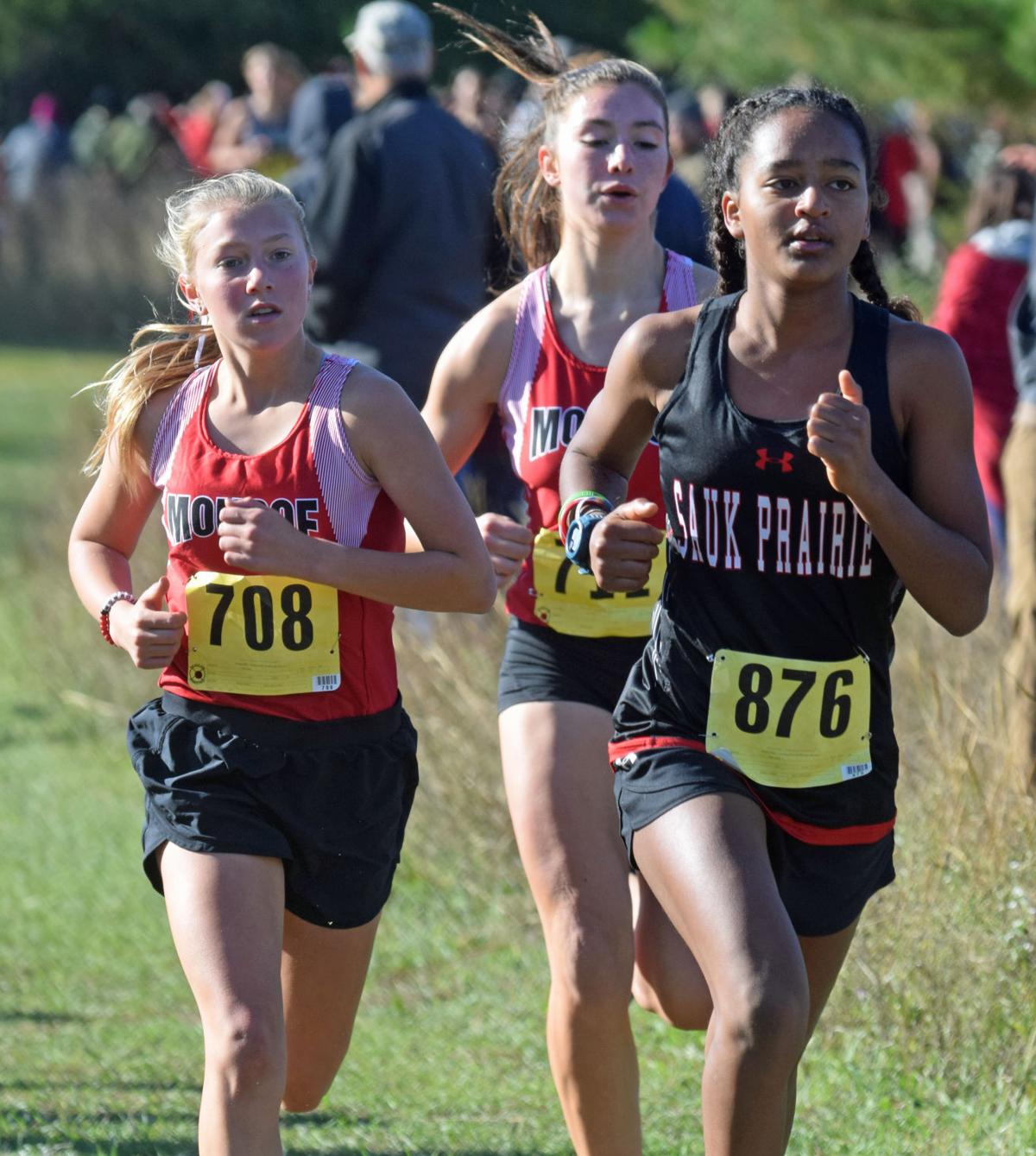 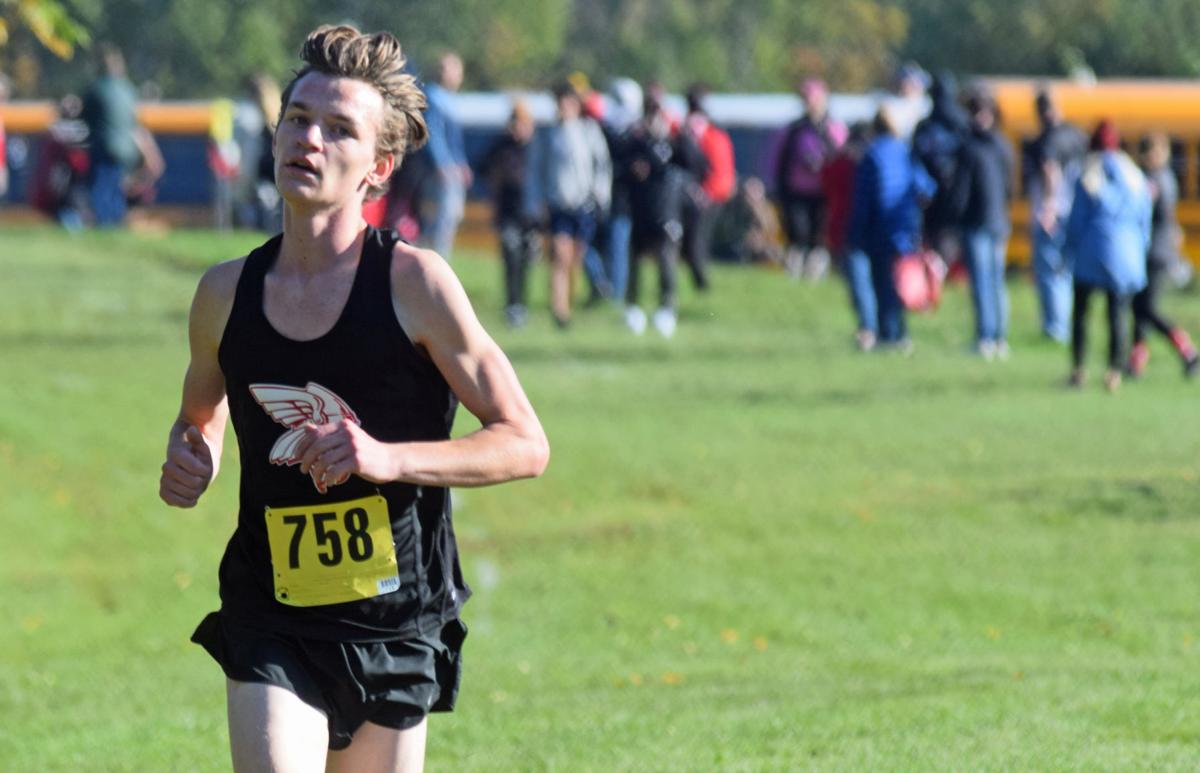 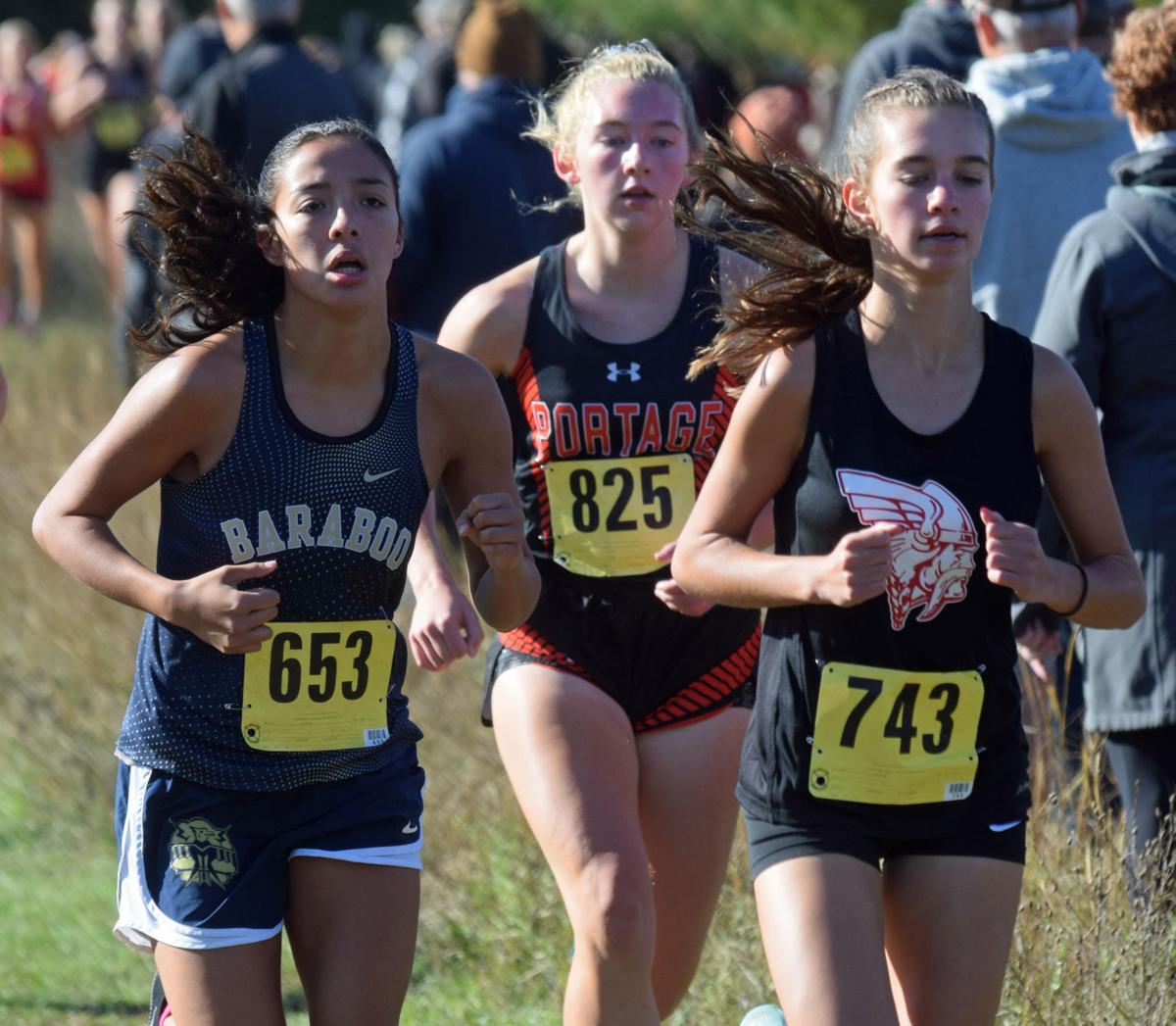 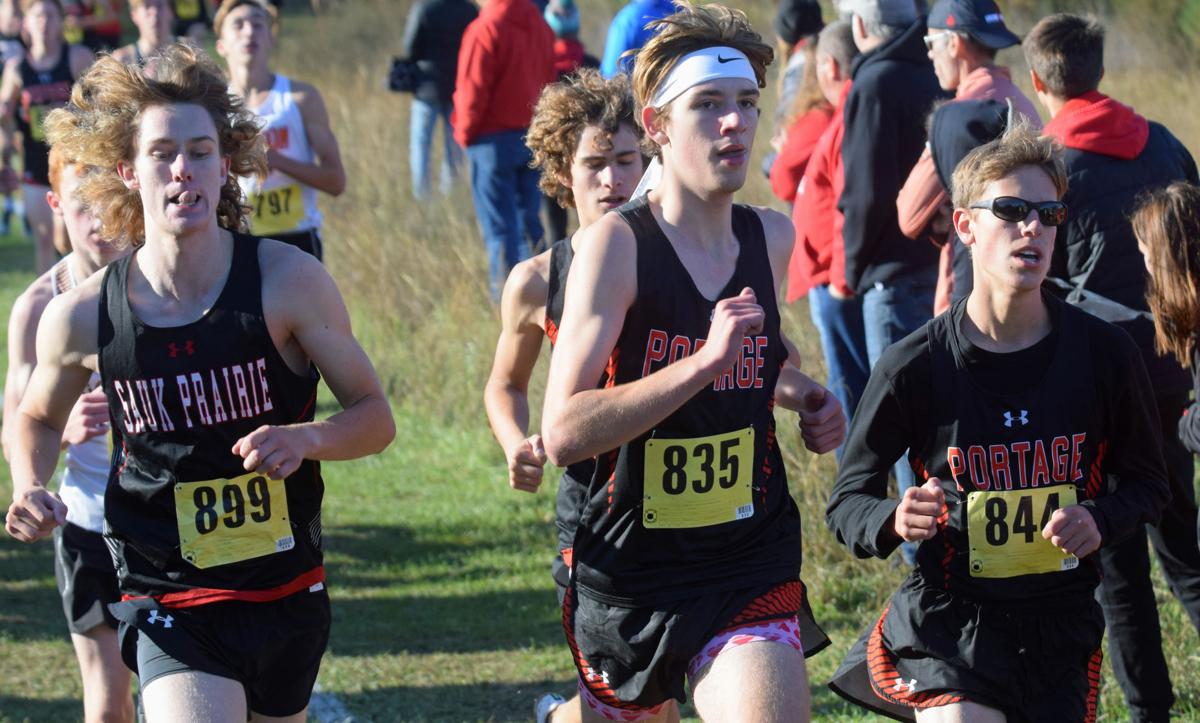 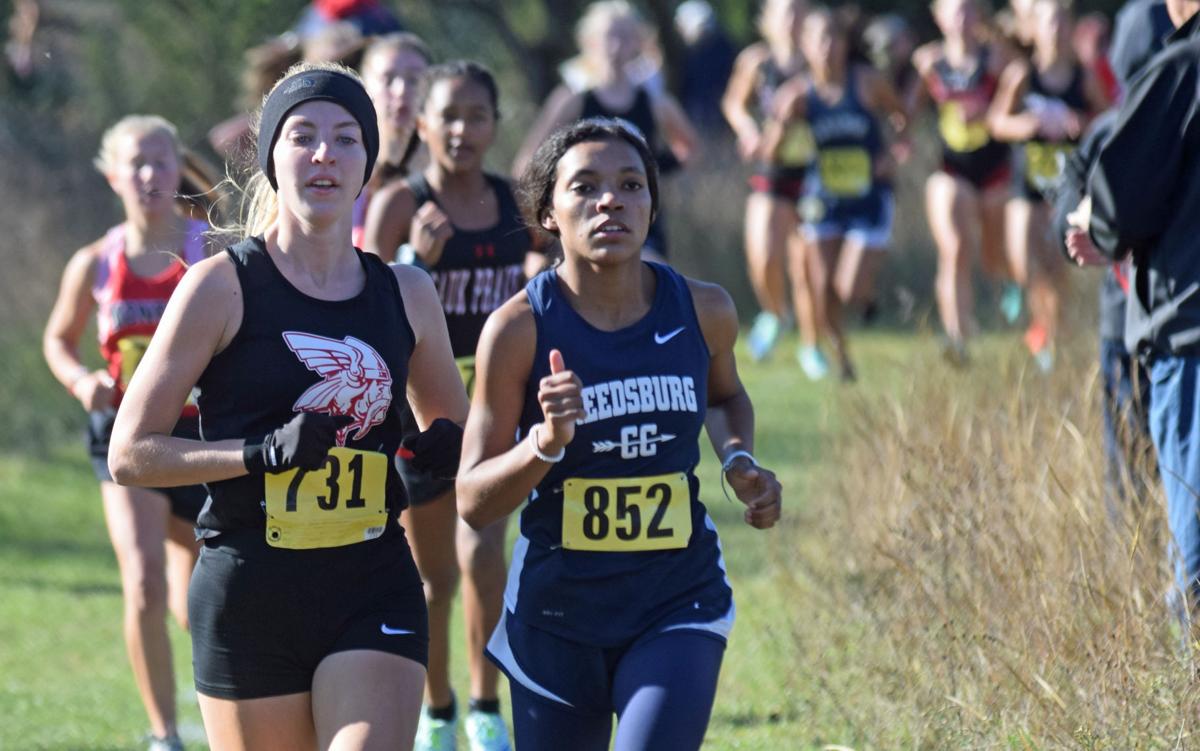 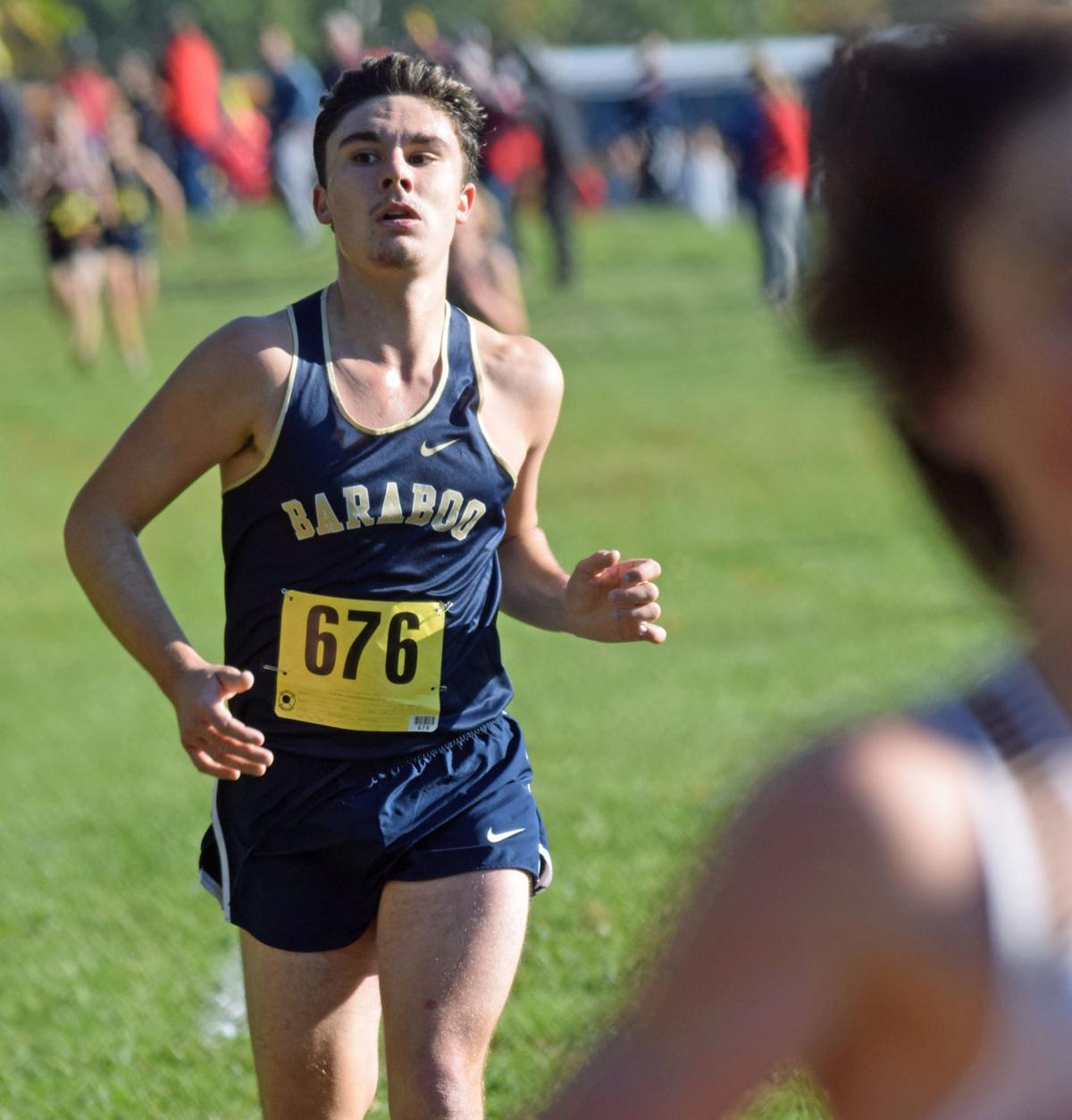 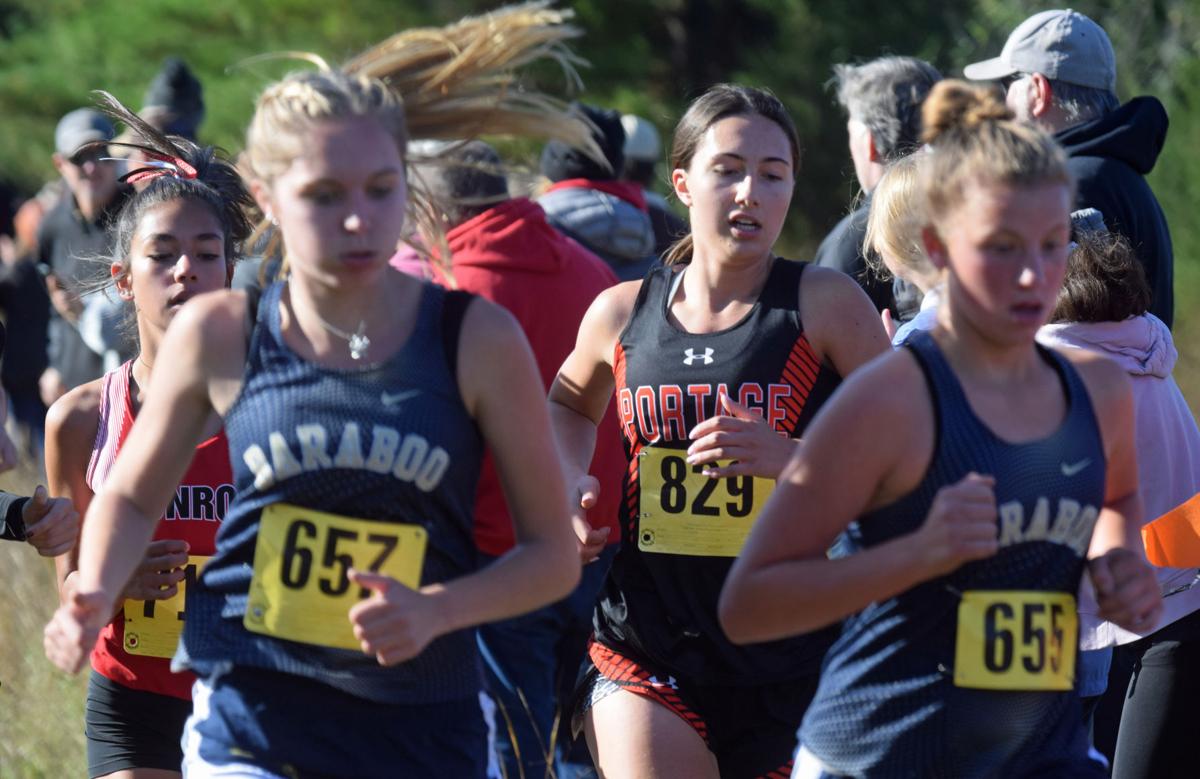 WYOCENA — Jack Boerger has been on an absolute tear this season with six event wins and just one runner-up finish at last week’s Wisconsin Rapids Jim Newman Invite.

The Sauk Prairie junior continued his torrid pace on Saturday as he won the Badger West Conference meet going away, helping lead the Eagles to the team championship in the process at Wyona Park. Boerger broke 16 minutes for the second straight meet with a winning time of 15 minutes, 59.25 seconds, over 45 seconds ahead of Mt. Horeb’s Joe Stoddard.

Boerger was joined by teammate Dalton Zirbel (17:04.34) in the top-three while the Eagles’ overall depth registered 65 points to edge out the team title over runner-up Monroe (77). Close behind the Cheesemakers were Mt. Horeb (82) and Baraboo (89), while the host Warriors were fifth with 101 points. Reedsburg rounded out area teams by finishing eighth with 182.

Like all of his other wins this season, Boerger did so with time to spare. After getting to the front of the pack out of the chute, Boerger created plenty of space coming around the opening loop and never looked back.

While Boerger won comfortably as the only male runner under 16 minutes, with Stoddard the only other runner to break 17, it was a packed field behind the top two. Zirbel narrowly beat out Monroe’s Jared Batz (17:08.56) and Mt. Horeb’s Ray Woller (17:09.65), while 14 others broke the 18-minute mark.

Joining Boerger and Zirbel for the Eagles was Ritchie Wolff, who finished 14th in 17:47.25. Wolff pulled away from the Warriors’ top three runners, led by Jeremy Saloun.

There was no catching Oregon and Dasha Vorontsov in Saturday’s girls race as the Panthers tallied four top-nine finishers, led by Vorontsov’s individual win, to the team title with 35 points. All five of the Panthers runners finished in the top-15 to hold off a game Mt. Horeb squad, who also had five top-15 finishers en route to a runner-up 46 points.

Sauk Prairie led area teams with 100 points, while Baraboo was fifth (118) and both Portage and Reedsburg were incomplete without enough runners to qualify for the team race.

Like her male counterpart, Vorontsov left no doubt in the girls varsity race as she won finished 5,000-meter run over a minute ahead of runner-up Rhya Brandemuehl of Mt. Horeb. Vorontsov set the pace from the beginning after the opening loop at Wyona Park, had smoot sailing ahead and cross the finish line in 18:50.72.

The Warriors were led by Macy Goldthorpe as the senior finished just outside the top-15 by a matter of seconds. Goldthorpe crossed in 21:38.75, just behind Oregon’s Mari Ceaca-Villa (21:35.56).

With conference now in the books, the area teams will now turn their attention to next Saturday’s sectional meets. Portage will return to Wyona Park as it hosts a WIAA Division 2 sectional meet, while the T-Birds, Beavers and Eagles will travel to DeForest for a Div. 1 sectional at Linde Fields.

With lofty goals for next week's sectional meet, Golden Beavers girls team tunes up by doing well at Saturday's conference championships in Madison

The Pumas returned six seniors from last year's team that made it to state for the first times since 2011. Poynette hasn't finished worst than runner-up in each of its invitationals this fall.

The Baraboo boys cross country team had four of the top-10 runners at Saturday’s Dells Invitational.

The fraternal twins have been running together since eighth grade and become two leaders, on and off the course, for the Warriors program.

The senior was one of just two runners to crack 17 minutes, while the Pumas had four top-15 finishers but fell by just two points to Lakeside Lutheran.

The team's motto of "Run happy" helped fuel the Chiefs to a fifth league title in six years, and now their sights are set on a team state appearance.

State-wide sectional meets this weekend will determine who gets to hit the Ridges Golf Course on Oct. 30 in the WIAA State Tournament's return to Wisconsin Rapids.

Sauk Prairie's Jack Boerger keeps his eyes on the timer as he approaches the finish line during the boys varsity race at Saturday's Badger West Conference meet at Wyona Park in Wyocena. Boerger won the boys varsity race in a time of 15 minutes, 59.25 seconds and helped lead the Eagles to the team title with 65 points.