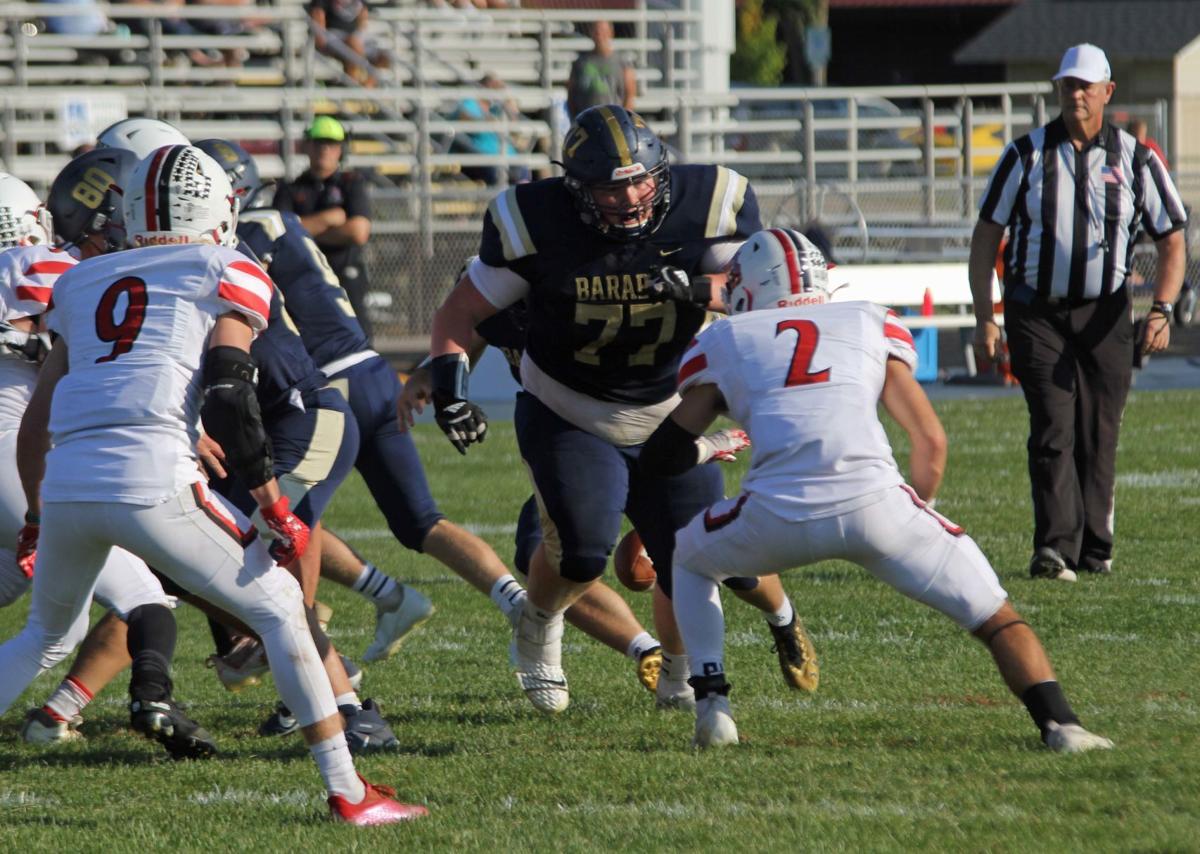 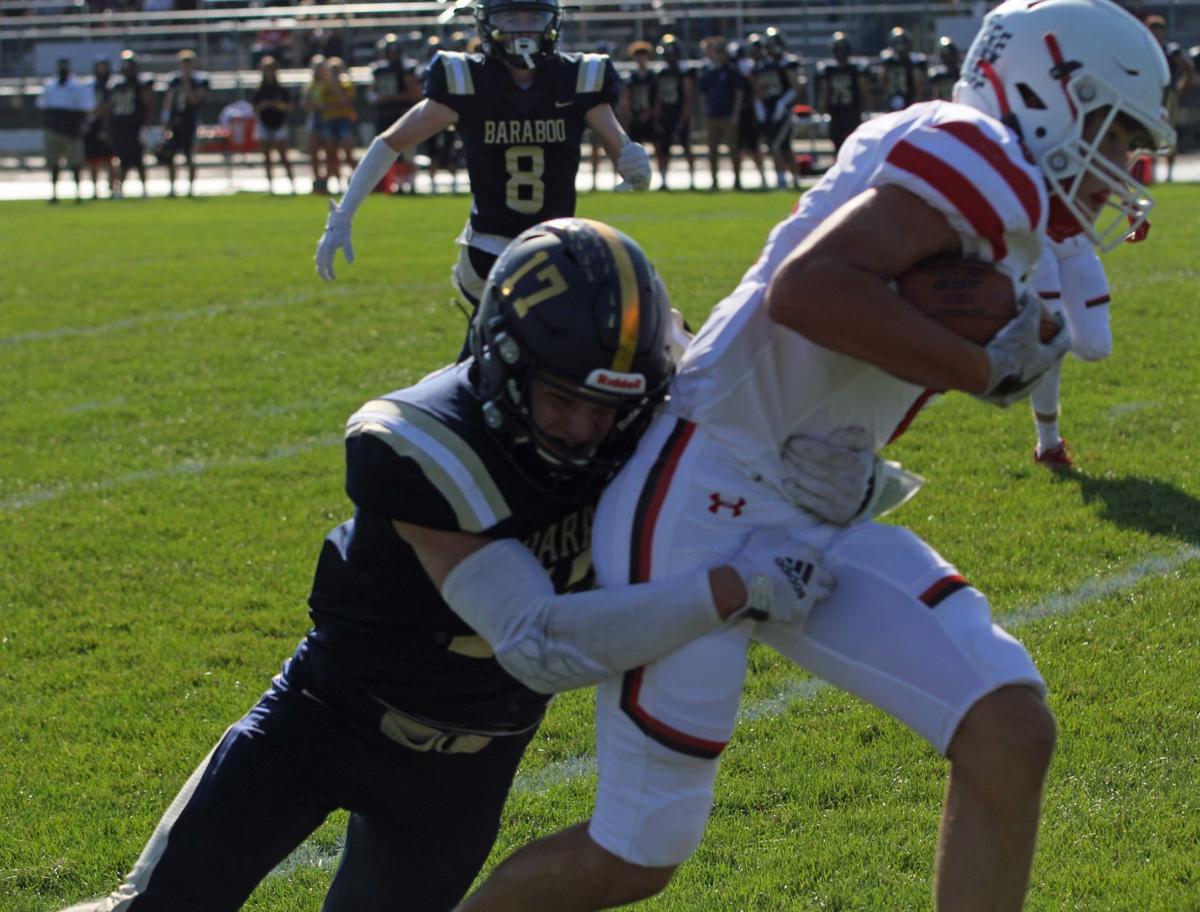 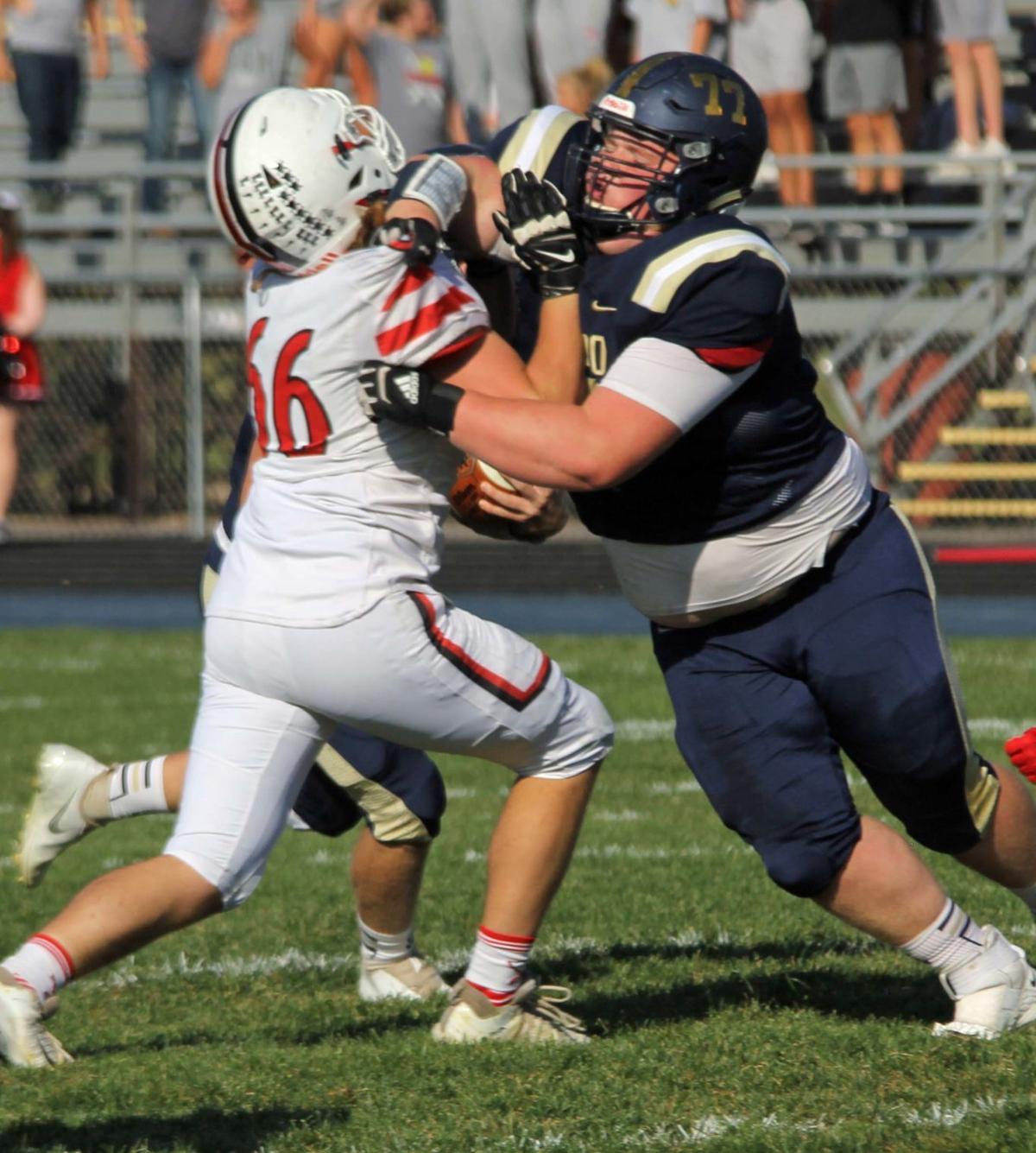 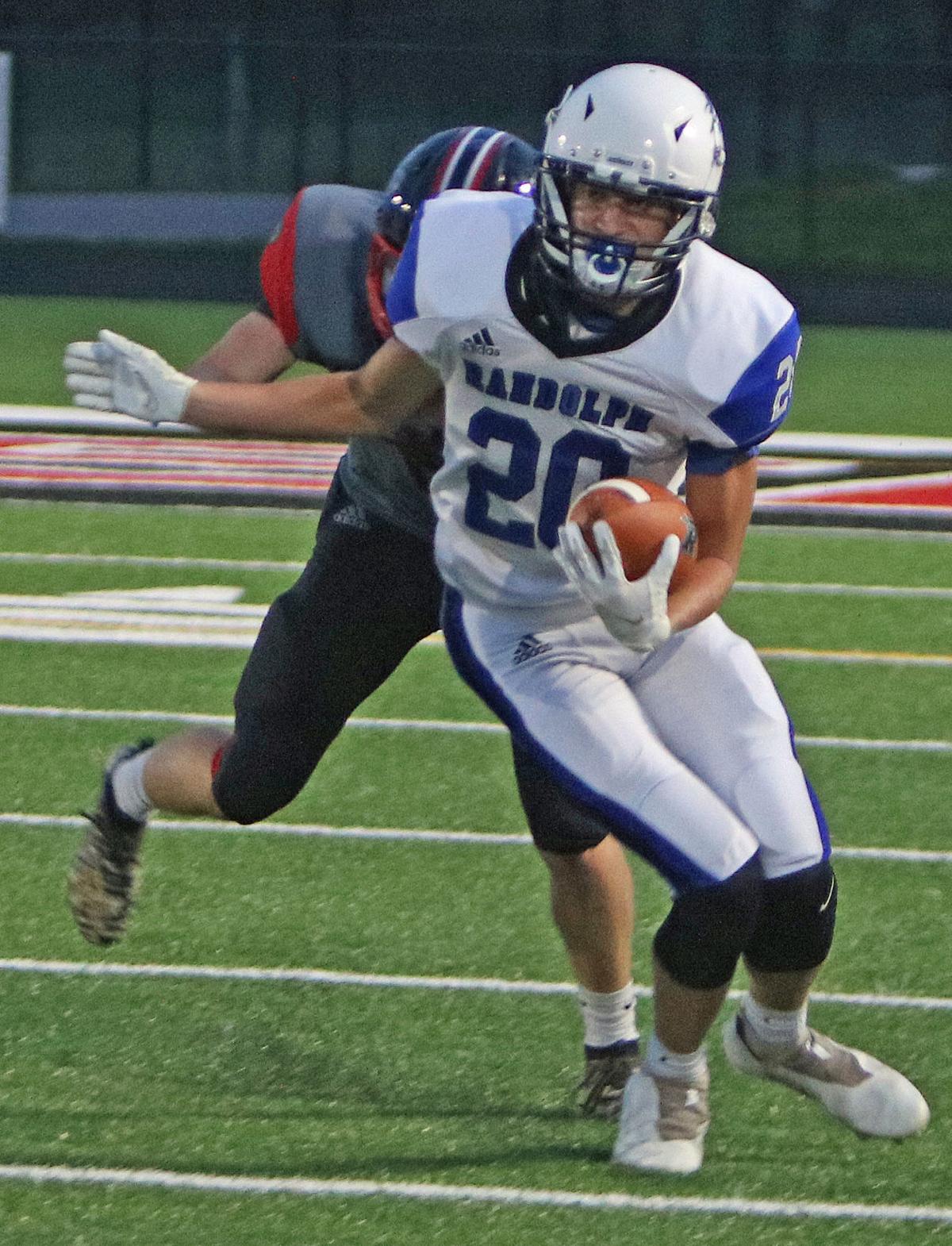 Randolph's Sam Grieger breaks a tackle attempt by Fall River/Rio's Cody Bartlet then sidesteps the sideline for extra yards during the first half of a Sept. 10 Trailways Conference game.

Baraboo is no longer unbeaten, and Fort Atkinson is now alone atop the Badger Small Conference.

The Blackhawks broke a tie with Baraboo on Friday night, improving to 4-0 in conference play with a 27-6 win over the visiting Thunderbirds.

Baraboo (5-1, 3-1 Badger Small), which is ranked first in Division 3 in the WisSports.net Football Coaches Poll, trailed throughout Friday’s game.

Fort Atkinson (5-1, 4-0) jumped out front at home, as Evan Dudzek ran for a touchdown before Alec Courtier broke free for a 65-yarder that stretched the lead to 14-0.

Baraboo got on the board with a 37-yard touchdown pass from sophomore quarterback Luke Vittengl to senior receiver Brady Henry, who dove along the right sideline to reel it in and trim the deficit to 14-6 going into halftime.

The Blackhawks broke the game open in the second half, using a 28-yard Jack Opperman touchdown reception and a 27-yard Dudzek touchdown run to open up a 27-6 lead with 10:32 to play.

Baraboo gave up a season-high 27 points after entering the day holding opponents to 10.8 points per game. Fort Atkinson won its fifth straight game since a season-opening 29-0 loss at Milton, giving up just 7.4 points per game during the winning streak.

The T-Birds will look to bounce back Oct. 1, when they host Reedsburg in the 134th meeting between the rivals. Baraboo improved to 64-63-6 in the series with a 24-0 home win last season.

Portage football executes in crunch time to rally by Reedsburg, 27-14

Poynette (2-3, 1-3 South Central) picked up its first South Central Conference win of the season with a 26-20 overtime win over visiting Adams-Friendship (3-4, 3-1) on Friday.

Schraufnagel got Mayville (5-1, 4-0 Flyway) off to a fast start, running for a 3-yard touchdown and a 5-yard touchdown in the first quarter to get the Cardinals out to a 14-0 lead.

They poured it on in the second. Braedon Vollmer ran for a touchdown before Schraufnagel added 2-yard and 26-yard touchdown runs to give Mayville a 32-0 lead going into halftime.

Laconia (2-4, 1-3) got on the board early in the second half, with Kyle Johnson scoring on a 63-yard touchdown run before the teams played a scoreless fourth quarter.

Sauk Prairie’s offense got on track, but the Beavers had no answer defensively in a 35-21 Badger Small loss at Monona Grove.

The Sauk Prairie (0-6, 0-4) offense reached double-digits for the first time this season after entering the night scoring 4.2 points per game. The Eagles will look to keep it going when they visit Portage next week.

Monona Grove (5-1, 3-1 Badger Small) took a 21-7 lead into halftime on a day in which it tied Baraboo for second place in the conference standings.

Cashton closed the fourth quarter with 15 unanswered points to claim a 37-16 Scenic Bluffs Conference win at Necedah on Friday.

After Necedah’s Landen Murphy threw a 3-yard touchdown pass to Chris Fowler — and Josiah Hansen ran in the two-point conversion — to trim the deficit to 22-6, Cashton answered immediately by returning the ensuing kickoff for a touchdown.

The Eagles tacked on a touchdown run to improve to 5-1, including 3-1 in the Scenic Bluffs Conference.

Mauston’s homecoming was spoiled after Dodgeville was forced to forfeit due to COVID-19 issues. The Golden Eagles received a win in the record books, improving to 5-1 on the season, including 4-0 atop the South Central Conference.

Royall canceled Friday’s home game against Bangor earlier this week, allowing the Cardinals to reschedule a game at Spencer/Columbus Catholic. Royall had fallen to 2-3, including 0-3 in the Scenic Bluffs Conference, with a 22-6 loss at Luther on Sept. 17.

With the conference portion of the prep football season already past the midway point, there’s only one thing that can be on teams’ minds: the…

Randolph's Sam Grieger breaks a tackle attempt by Fall River/Rio's Cody Bartlet then sidesteps the sideline for extra yards during the first half of a Sept. 10 Trailways Conference game.