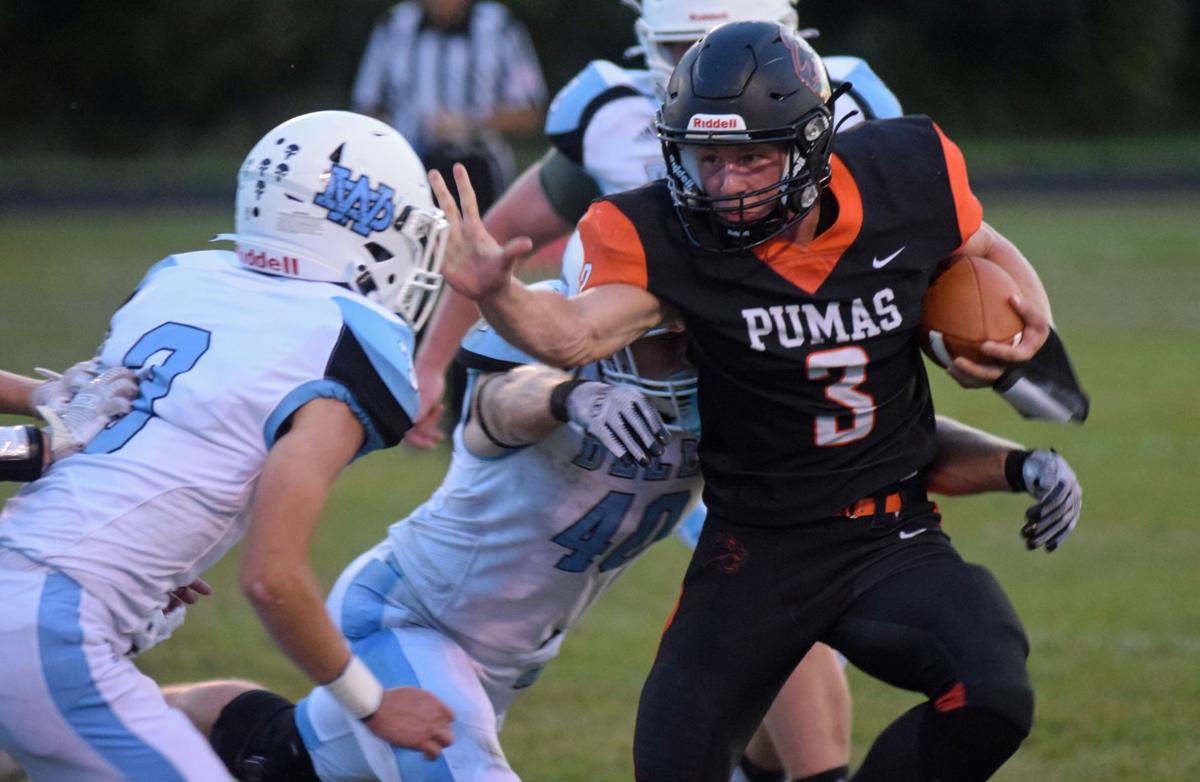 Poynette senior Jimmy Heath looks to deliver a stiff arm to Wisconsin Dells' Braden Buss (3) while trying to elude a tackle by Matt Getgen during a South Central Conference game on Sept. 10. Heath and the Pumas will try to get back on track this Friday facing a must-win game against Adams-Friendship. 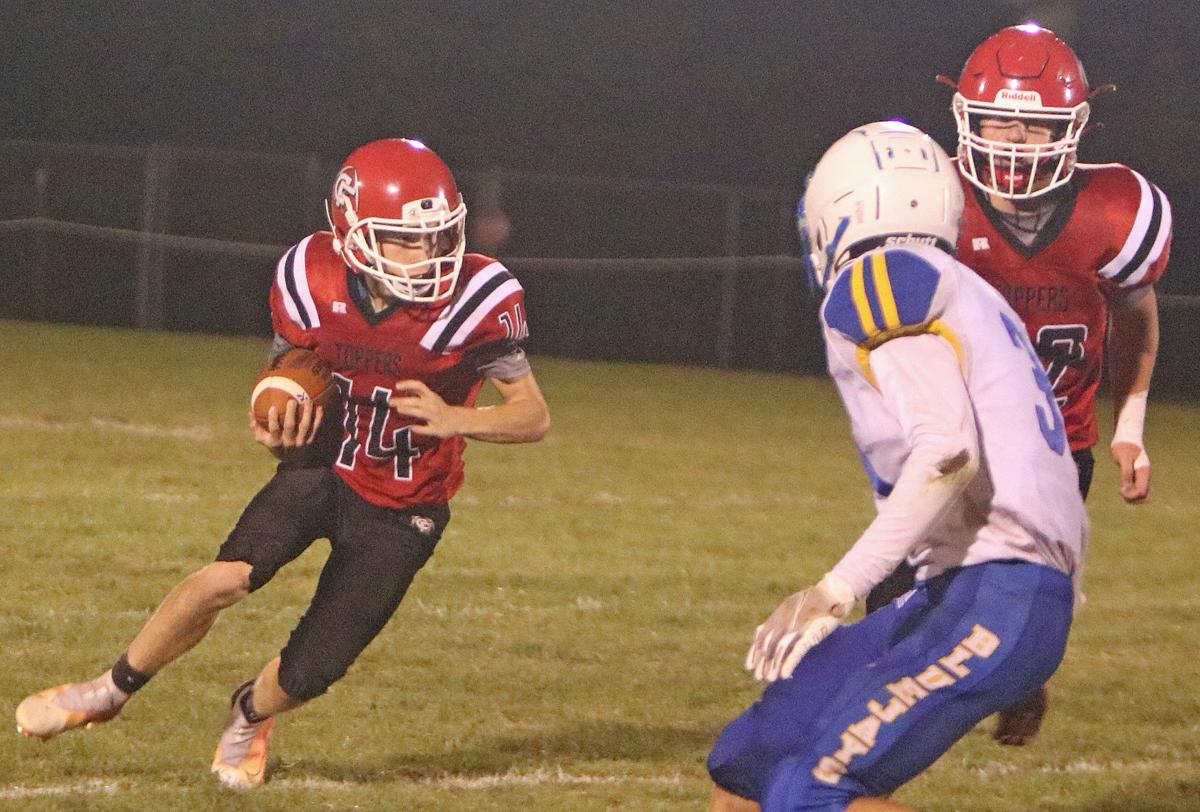 Cambia-Friesland's Trevor Krueger (left) cuts upfield as Tate DeJager (right) looks to make a block during last Friday's Trailways Conference game against Johnson Creek. The Hilltoppers made a statement with a 36-28 win over the Bluejays and will try to avoid a let up this week against Deerfield.

All season long, area football teams have been put into unique situations.

Whether due to referee shortages or COVID-19 issues, games have been been moved ahead of schedule or delayed a day, sometimes even postponed to the following Monday.

Others have been postponed to later in the season, and a handful have led to forfeits. Despite all the craziness off the field, the action on it has been just as intense, and things don’t look like they’re going to slow down anytime soon.

The playoffs are right around the corner and already this week teams like Lodi and Wisconsin Dells can punch their tickets to the playoffs. Meanwhile, other teams will try to help bolster their postseason hopes with crucial victories.

Here are the area’s top games to watch this week:

Nothing gets teams excited quite like a bitter rivalry.

Portage will certainly be hoping a rivalry matchup can jolt it back into the win column against Reedsburg this week. While Portage is coming off consecutive defeats — including last Friday against Fort Atkinson — following the program’s first 3-0 start since 2007, the Beavers are flying high after their first win of the season over Sauk Prairie last week.

Reedsburg (1-4, 1-2 Badger Small) led throughout the 28-0 shutout win over the Eagles behind a strong all-around performance. The Beavers had a blocked punt for a touchdown and an 81-yard punt return score by Griffen Elder before their offense even touched the ball.

The offense later found the end zone via a 24-yard pitch-and-catch from Bryant Yanke to Trey Schinker, with the latter capping off the Beavers’ scoring with a 70-yard interception return.

Reedsburg will look to get things going more offensively, as they have just under 1,000 total yards of offense (569 passing, 429 rushing) and nine scores through five games. Yanke has thrown for 403 yards and two scores with four interceptions on 47-of-85 passing, while Elder has a team-high 173 yards rushing on 64 attempts.

Those numbers could increase against a Portage defense that has started to bend more easily during its current murderers’ row of Stoughton, Mt. Horeb/Barneveld and Fort Atkinson. Most recently, the Blackhawks pulled away down the stretch against the Warriors, scoring 22 fourth-quarter points to earn a 29-16 win at Bob Mael Field.

Since opening the season with back-to-back shutouts over Adams-Friendship and Whitewater, the Warriors (3-2, 1-2) have allowed 26 points per game in their last three outings. While the defense has slumped just a hair, Portage’s offense continues to click.

The Warriors piled up over 300 yards of offense against Fort Atkinson, including seniors Erik Brouette and Jordan Starr rushing for 99 and 60 yards, respectively. Junior quarterback Gavin Thompson completed 10 of 18 passes for 102 yards and an interception to stretch his season stats to 605 yards and four touchdowns. That passing game could be pivotal against the Beavers, who are allowing 209.4 yards per game through the air and 10 touchdowns this season.

Westfield got off the schneid in a big way last Friday, snapping a 23-game South Central Conference losing streak dating back to 2016 with a 26-8 win over Poynette.

Prior to their win over the Pumas, the last team to lose to the Pioneers? Wisconsin Dells.

A lot has changed since the teams met in the 2016 season finale. Especially this season, as the Chiefs are 5-0 for the first time in more than 30 years. Wisconsin Dells’ early-season success will certainly make it difficult for Westfield to rattle off a second straight league win.

Westfield (2-3, 1-2 South Central) took some time to get going against Poynette but ultimately found a groove, scoring the first 26 points, including a pair of scores early in the fourth quarter, to put away Poynette.

Junior Kashton Kangas did a bit of everything as he completed 11 of 16 passes for 161 yards and three touchdowns, while also rushing for 70 yards on eight attempts. He also registered 10 tackles, including four solo, and averaged 37.7 yards on three punts. Meanwhile, Hunter Goodwin rushed for 106 yards and the other score on 29 attempts, and five separate receivers caught passes.

After facing a shorthanded Pumas squad, however, the Westfield offense will face a much stiffer task this week.

Matt Getgen has found a way to tack on the rushing yards, leading the team with 622 yards and 11 touchdowns in four games this season. He didn’t play last week against New Glarus/Monticello, but it didn’t matter as the Chiefs rolled to a 48-13 win over the Glarner Knights.

That was largely due to Braden Buss, who had himself a night throwing for 191 yards and two touchdowns while completing 13 of 18 passes. Buss has thrown for 759 yards, seven TDs and four interceptions while completing 52 of 82 passes. So, by land or by air, the Pioneers will have their hands full.

A punishing ground game sunk Pardeeville last week in a last-minute non-conference game against Shiocton as the Bulldogs fell to the Chiefs, 27-0.

After receiving a Eastern Suburban Conference win over Clinton due to forfeit, Pardeeville quickly scheduled Shiocton and surrendered 284 rushing yards on 34 carries, with Shiocton’s Parker Moder and Cade Stingle each rushing for 130 yards and a score on 14 carries apiece.

The Bulldogs (3-2, 2-1 Eastern Suburban) return to league play this week against Cambridge and again will have their work cut out for them on the ground against a high-powered Blue Jays team looking to stay in the conference title hunt.

Fueling the Cambridge (3-2, 2-1) offense is every-down running back Trey Colts. The 6-foot, 155-pound senior turned in the seventh-best rushing performance in state history last week against Dodgeland, rolling to 444 yards and six touchdowns on just 20 carries in a 53-7 win.

The massive margin has Colts already on the cusp of the 1,000-yard mark this season. He has 931 yards and 12 scores on 71 carries, good for an impressive 13.1 yards per attempt. It poses quite the challenge for the Bulldogs, who have largely performed well against the run, allowing just 86.6 yards per game so far.

Offensively, Pardeeville must try to get back on track after tallying just 187 total yards in last week’s loss to the Chiefs. The Bulldogs had just 56 rushing yards on 41 carries and struggled to hold back Shiocton’s defensive front, which tallied five sacks and forced a pair of interceptions.

The Pumas, having dropped three games in a row, now have the difficult task of winning out the remainder of the season in order to keep their postseason hopes intact. That journey starts Friday as Poynette (1-3, 0-3 South Central) hosts an Adams-Friendship team that has started to find a groove.

The Green Devils (2-3, 2-1) received a conference forfeit win over Wautoma last week and also found a replacement game, topping Walworth Big Foot, 22-14. Aiden Livingston continued to be the focal point of the Adams-Friendship offense. The junior quarterback accounted for all three Green Devils scores, throwing for 129 yards and two scores on 9-of-15 passing while also rushing for 129 yards and a score on 15 attempts.

Livingston leads the Green Devils in both categories, having rushed for 551 yards and six scores and throwing for 245 yards and another three TDs this season. He poses a strong dual-threat option for the Pumas to handle, but it’s nothing they don’t see on a daily basis with Jimmy Heath.

Portage football executes in crunch time to rally by Reedsburg, 27-14

The Warriors scored three times in the fourth quarter to pick up a second straight win in the rivalry.

Poynette senior Jimmy Heath looks to deliver a stiff arm to Wisconsin Dells' Braden Buss (3) while trying to elude a tackle by Matt Getgen during a South Central Conference game on Sept. 10. Heath and the Pumas will try to get back on track this Friday facing a must-win game against Adams-Friendship.

Cambia-Friesland's Trevor Krueger (left) cuts upfield as Tate DeJager (right) looks to make a block during last Friday's Trailways Conference game against Johnson Creek. The Hilltoppers made a statement with a 36-28 win over the Bluejays and will try to avoid a let up this week against Deerfield.