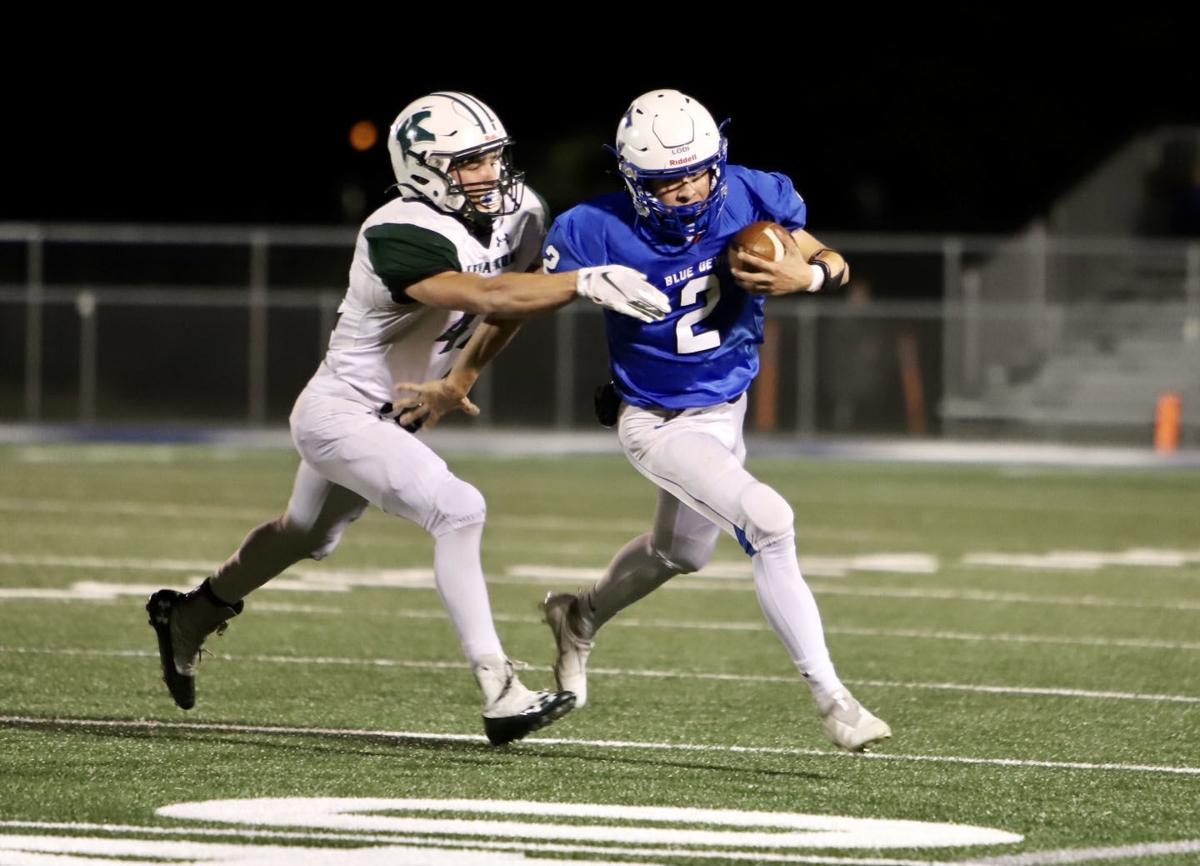 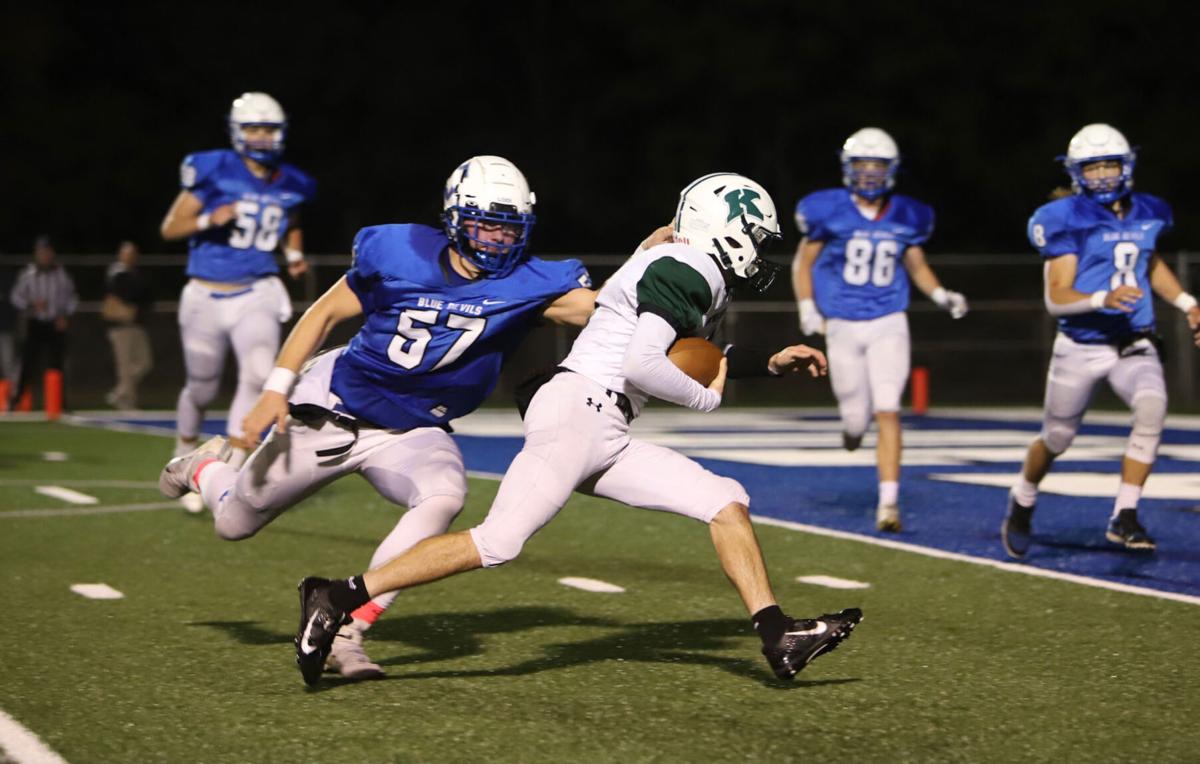 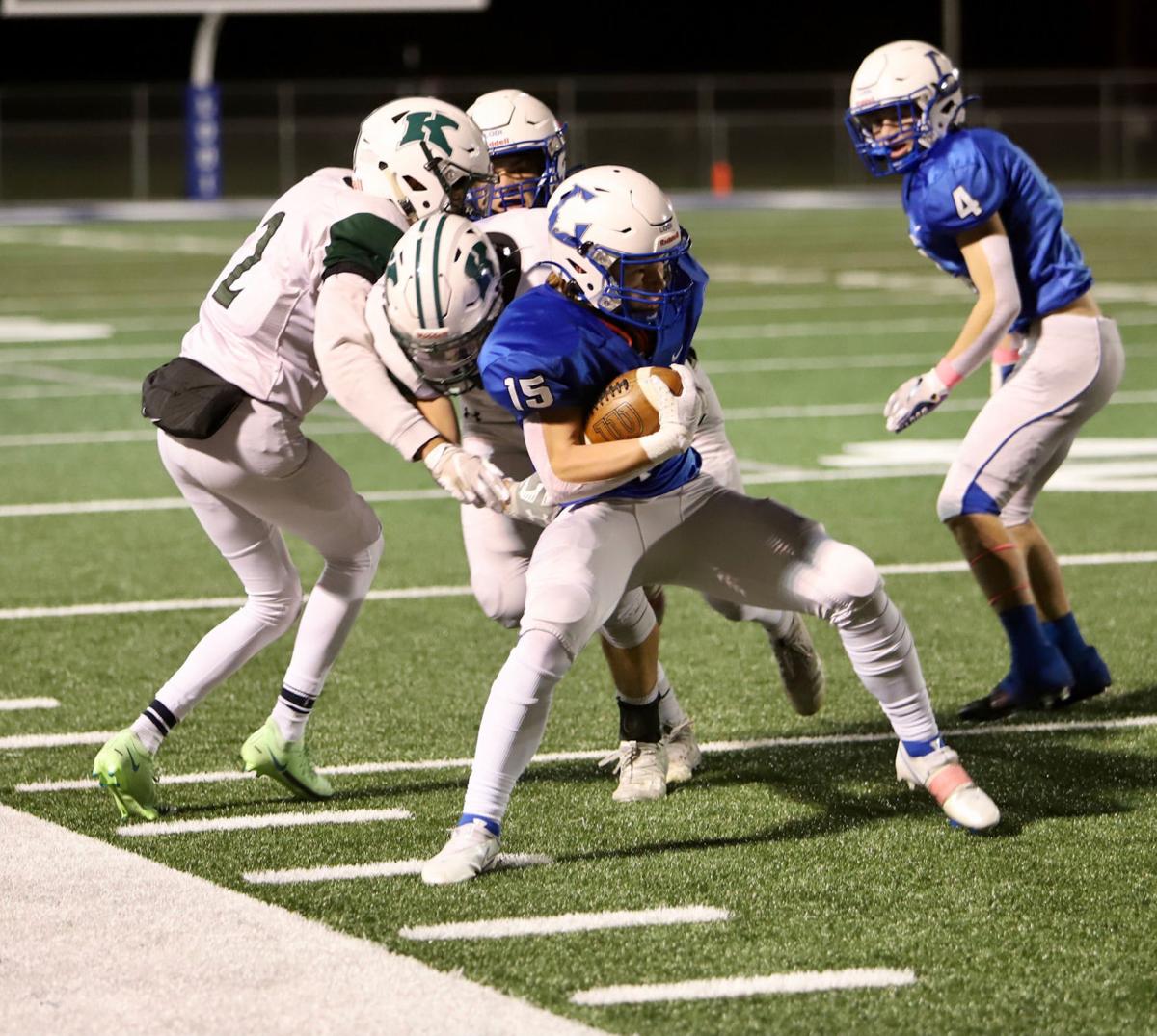 Lodi’s Erik Lincoln (15) is pulled down by a trio of Kewaskum defenders on Friday night. 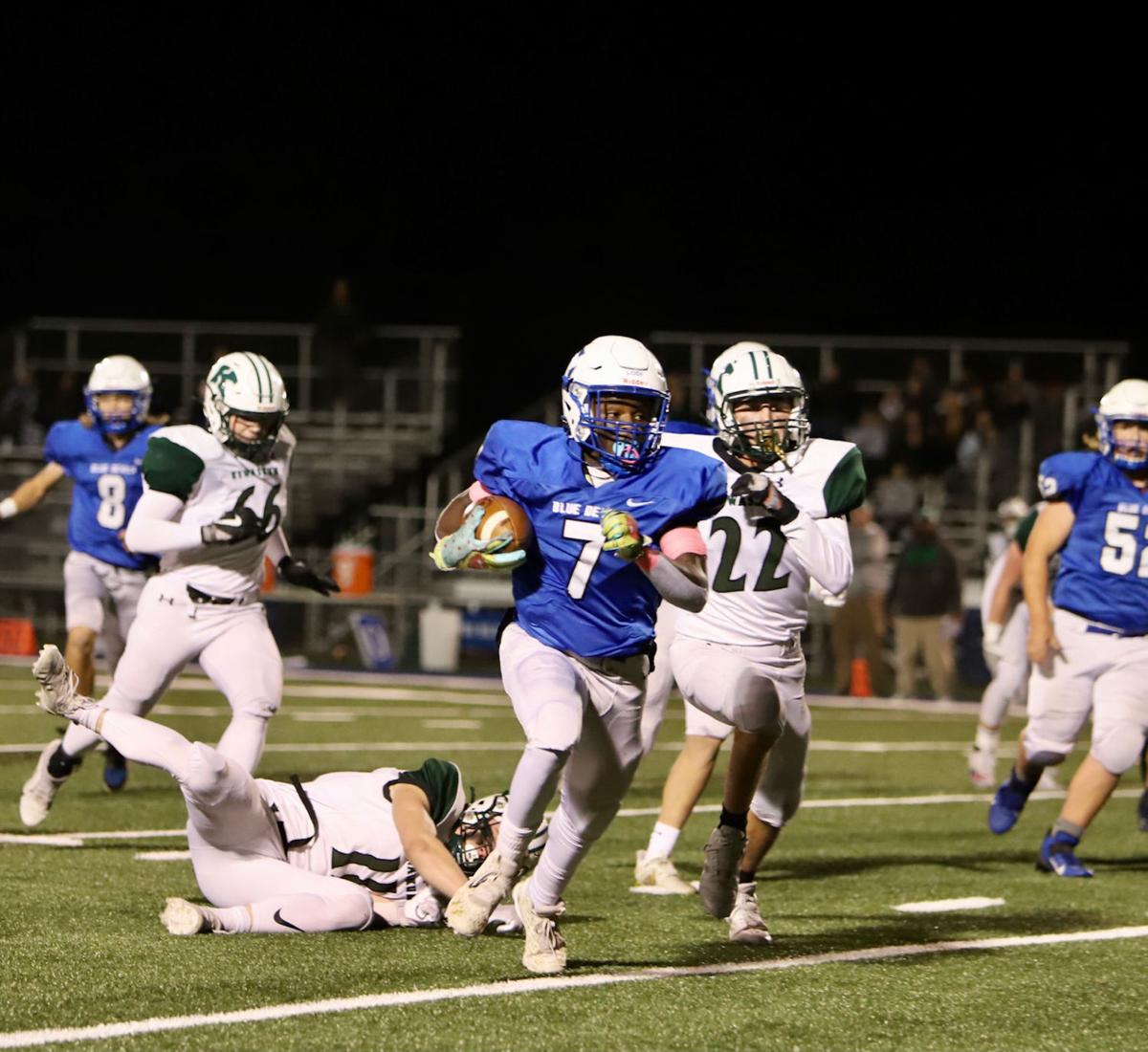 Lodi’s Jaylen Montgomery (7) breaks into the open on a 26-yard first-quarter touchdown run Friday against Kewaskum.

LODI — Kewaskum’s Maxwell Melzer took the first play of the game 70 yards for a touchdown and added a 53-yard scoring run early in the third quarter to help the fifth-seeded Indians hold off Lodi, 29-20, on Friday in a Level 1 Division 4 game.

Melzer’s second score had given the fifth-seeded Indians a 19-7 advantage with 9:47 left in the third quarter. Kewaskum (7-3) increased it to 22-7 when the Indians turned an interception into a 39-yard field goal by Andrew Bolek with 3:15 remaining in the quarter.

Things were looking bleak for the fourth-seeded Blue Devils (7-3), who had struggled on offense and led only once, 7-6, when senior Jaylen Montgomery scored in the first quarter on a 26-yard run. But junior quarterback Keegan Fleischman lit a fire under his teammates and almost pulled off a rally to remember.

Fleischman capped an 80-yard scoring drive in the third quarter with a 1-yard run, a drive that was aided by Fleischman breaking loose for a 40-yard scamper. With the score 22-13, the Blue Devils recovered the ensuing onside kick on Kewaskum’s 48-yard line. Fleischman and the Blue Devils took advantage, as the junior quarterback scored on a 2-yard run with 9:17 left in the game, cutting the Indians' lead to 22-20.

With momentum seemingly in Lodi’s favor, Kewaskum answered with a back-breaker. The Indians marched 70 yards down the field sealing the win when senior quarterback Matthew Buechel hit Ben Butler on a 9-yard scoring pass on a fourth-and-5 play with 2:58 remaining in the game to make it a two-score game at 29-20. The drive ate nearly seven minutes off the clock as Lodi saw its final two possessions of the game end in a fumble and an interception.

“We just didn’t get done what we needed to get done (on Kewaskum’s scoring drive),” said Lodi coach Dave Pulls. “Sometimes you just don’t have enough gas in the tank and we didn’t have that tonight.

“We gave up some big plays.”

Fleischman finished the game hitting on 13 of 19 passes for 105 yards and also rushed for 129 yards on 18 carries, but was intercepted twice. Montgomery tallied 121 yards on 17 carries with a fumble.

“The ball just didn’t bounce our way tonight,” said Puls. “No excuses. I don’t want to take anything away from Kewaskum. They’re a heck of a team and a heck of a program.

“But this just hurts, it really stinks.”

Lodi’s Erik Lincoln (15) is pulled down by a trio of Kewaskum defenders on Friday night.

Lodi’s Jaylen Montgomery (7) breaks into the open on a 26-yard first-quarter touchdown run Friday against Kewaskum.