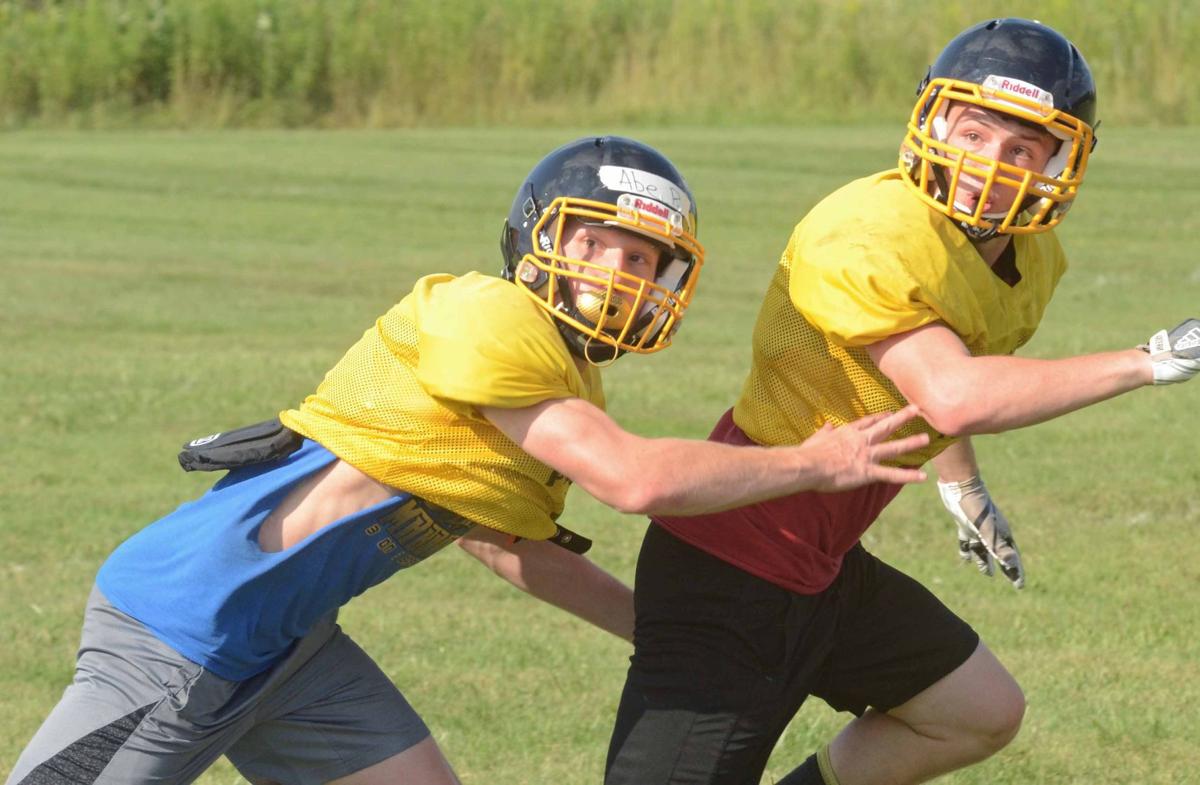 Montello/Princeton/Green Lake junior Abe Postler, left, defends senior teammate Drew Torres in a defensive drill during the team's practice in Princeton on Aug. 8. Both players are expected to play key roles for the Phoenix this season. 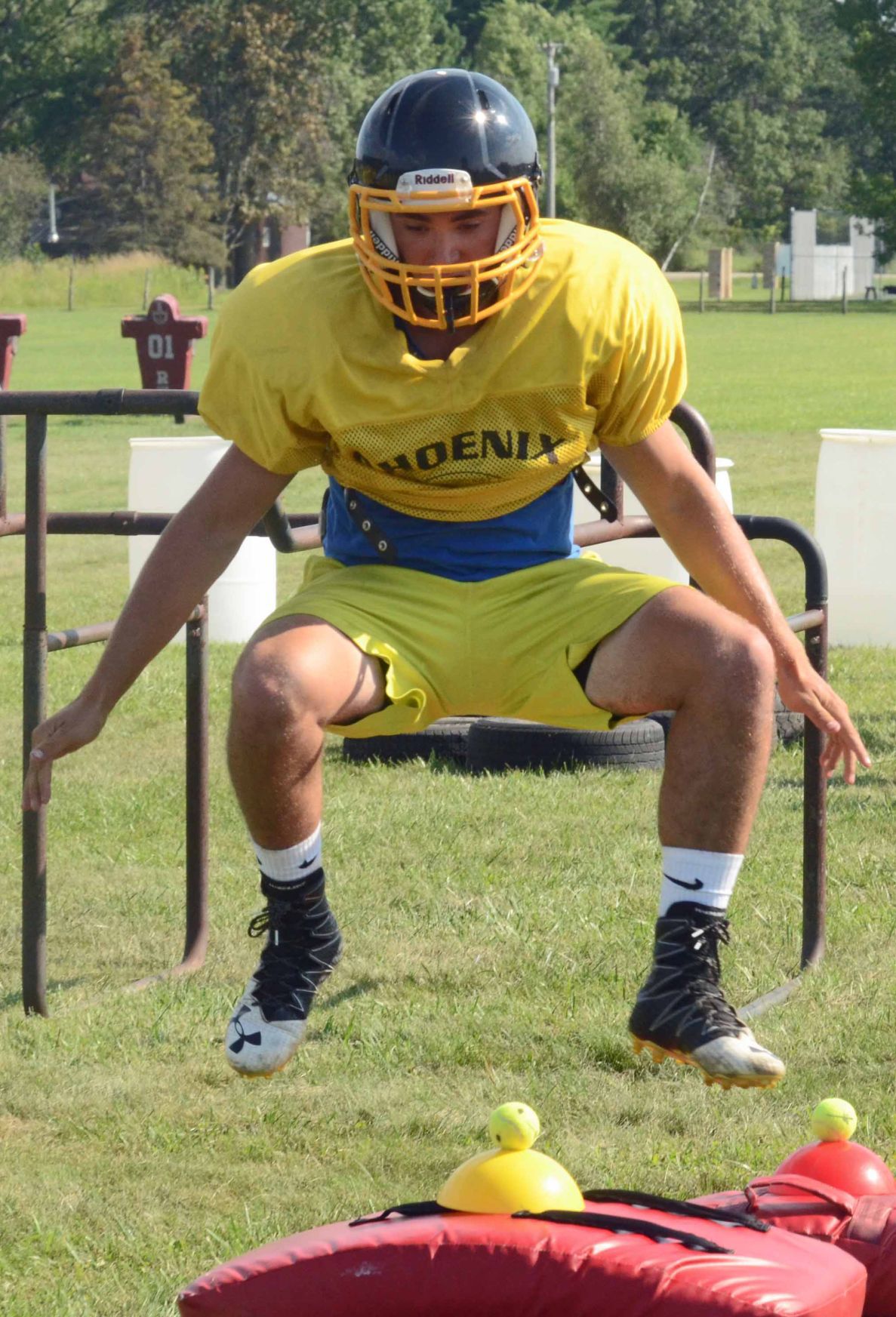 Montello/Princeton/Green Lake senior Brad Myers jumps over a tackling dummy during his team's practice on Aug. 8 in Princeton. Myers averaged 22 yards per reception for the Phoenix last year.

After missing the playoffs in 2014 and 2016, MPGL had high hopes of getting back to the postseason last year, and looked poised to do so with plenty of returning starters on the roster. But the 2017 campaign didn’t go as hoped, as a 41-14 loss to Iola-Scandinavia in the opener was the start of what turned out to a disappointing 1-8 season.

And while the record wasn’t anything close to what the Phoenix had hoped it would be, a closer look at the season shows things weren’t as bad as they appeared. Of the team’s eight losses, six of them were one-score games, and three of the losses were by a combined eight points.

As the Phoenix try to reverse the trend of losing close games this season, they will do so with a new head coach calling the plays, as Lance Schultz was hired in the offseason to replace co-head coaches Bill Sauld and Harlon Leusink. Schultz, who was a three-year starting quarterback at Berlin High School from 1987-89, is plenty familiar with the program. He was an assistant coach for the Phoenix two years ago and his son, BJ Konkel, was a key contributor on the varsity last season.

Schultz said the key to the season will be changing the mindset of the players after a disappointing 2017.

“We need to get the kids to believe they can compete. I think we will be competitive,” Schultz said. “This group of juniors and seniors were pretty good in seventh grade.”

The Phoenix should have the weapons to compete this season, especially at running back, where the likely starting backfield of Abe Postler (wing back), BJ Konkel (fullback) and Micah Williams (tailback) are all returning starters. Postler, who was a second-team All-Trailways Large Conference running back a year ago, ran for 472 yards on 79 carries, good for an impressive 6 yards per carry average, while scoring four touchdowns. Konkel rushed for 398 yards on 85 carries (4.7 yards per carry) and had a team-high seven rushing touchdowns.

Williams will also get his fair share of carries this season. He is making the move to running back after playing center in past seasons.

“We have a lot of good ones,” Schultz said of his running backs. “We’re pretty deep there.”

The Phoenix might have a fourth running back option in Drew Torres. The senior, who might be the team’s best athlete, is going to play all over the offensive formation. On one play he could be at wingback, while the next play he could be split out wide. And then on another play, Torres could be taking snaps at quarterback.

Even if Torres does play some quarterback, don’t expect incumbent starter Buxton Toutant to lose his job. Toutant was a second-team all-conference quarterback last year as sophomore when he completed 50 of 115 passes for 654 yards while throwing six touchdowns and just two interceptions. Torres brings more athleticism to the QB spot, while Toutant is more a pocket passer, but Schultz said Toutant is a more-than-capable runner, too.

Other players to watch on defense include Eurich at defensive end along with Krings and Luechen at defensive tackle. Junior Aaron Klapper and senior Guenther Hebbe will likely join Konkel at linebacker, while Myers, Toutant and senior Bennett Bartol will be in the defensive backfield.

Phoenix at a glance

On offense: The Phoenix open the season loaded at running back, where seniors Drew Torres and Micah Williams are joined by juniors Abe Postler and BJ Konkel to give the team four solid options running the ball. If the team chooses to throw, it has a big-play receiver in Brad Myers, who averaged 22 yards per catch last year.

On defense: Expect MPGL to be led by Williams and Konkel. Williams moves to defensive end from middle linebacker, where he was a first-team all-conference pick a year ago. Konkel led the Trailways Large Conference in tackles last year, and was a second-team pick at outside linebacker.

Bottom line: The Phoenix lost a bunch of close games last season. If they can find a way to turn some of those close calls into wins, especially early in the season, they could end the program's two-year playoff dry spell.

PREP FOOTBALL: Area teams will be battling it out in Trailways Conference

Montello/Princeton/Green Lake junior Abe Postler, left, defends senior teammate Drew Torres in a defensive drill during the team's practice in Princeton on Aug. 8. Both players are expected to play key roles for the Phoenix this season.

Montello/Princeton/Green Lake senior Brad Myers jumps over a tackling dummy during his team's practice on Aug. 8 in Princeton. Myers averaged 22 yards per reception for the Phoenix last year. 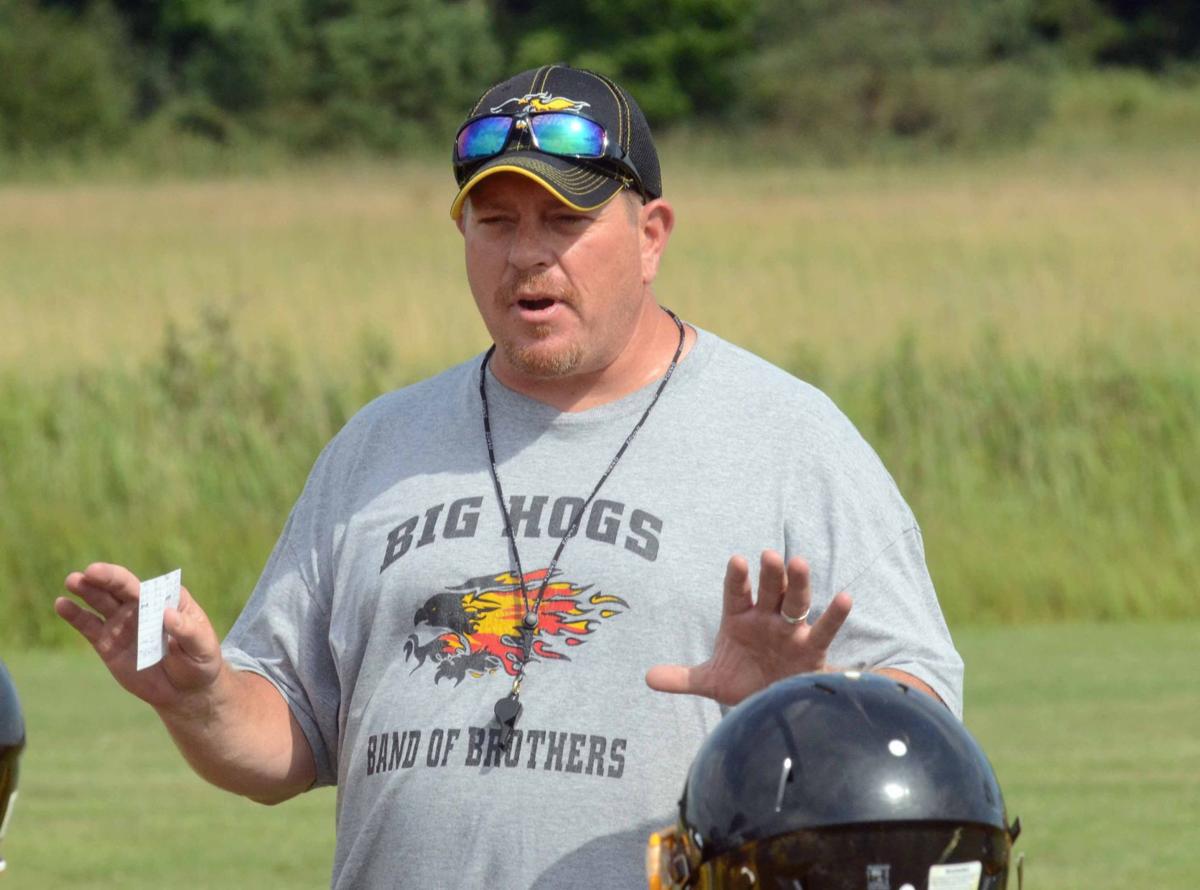