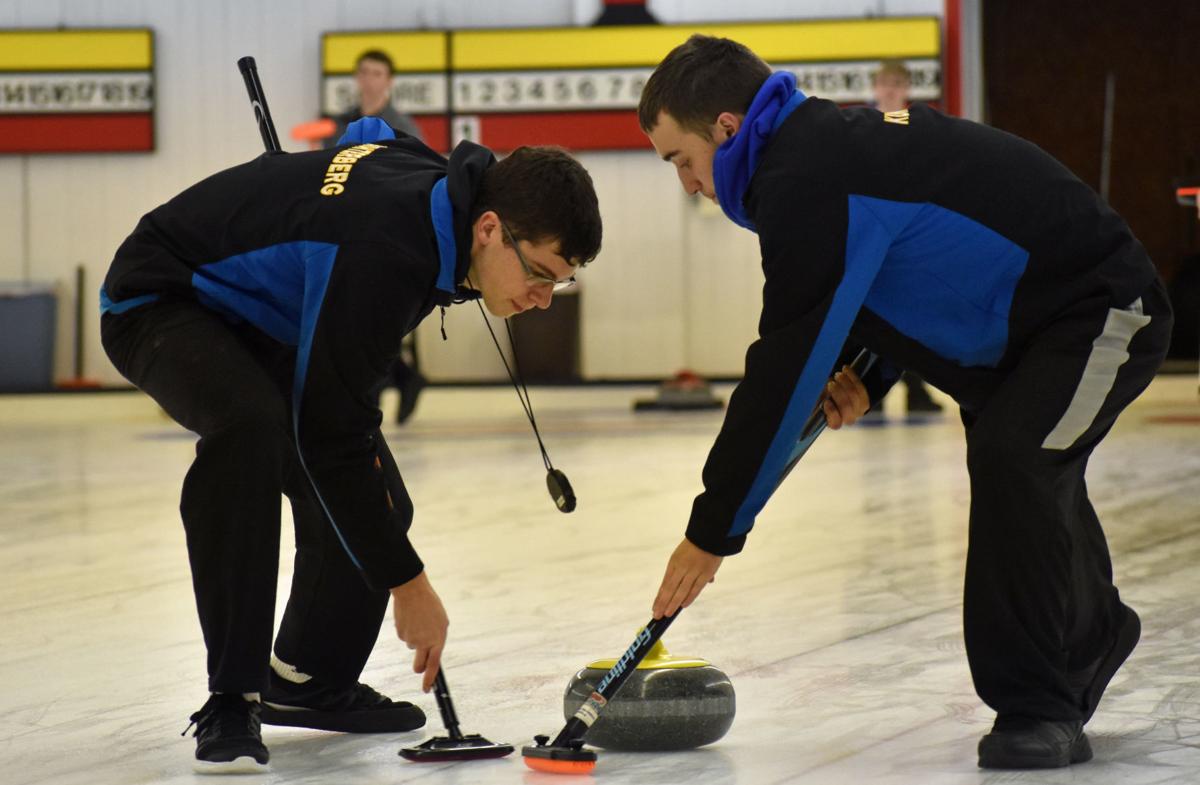 Pardeeville's Easton Achterberg, left, and teammate Alex Kuhn sweep ahead of a stone during a Southern Conference match against Portage at the Portage Curling Club on Tuesday. 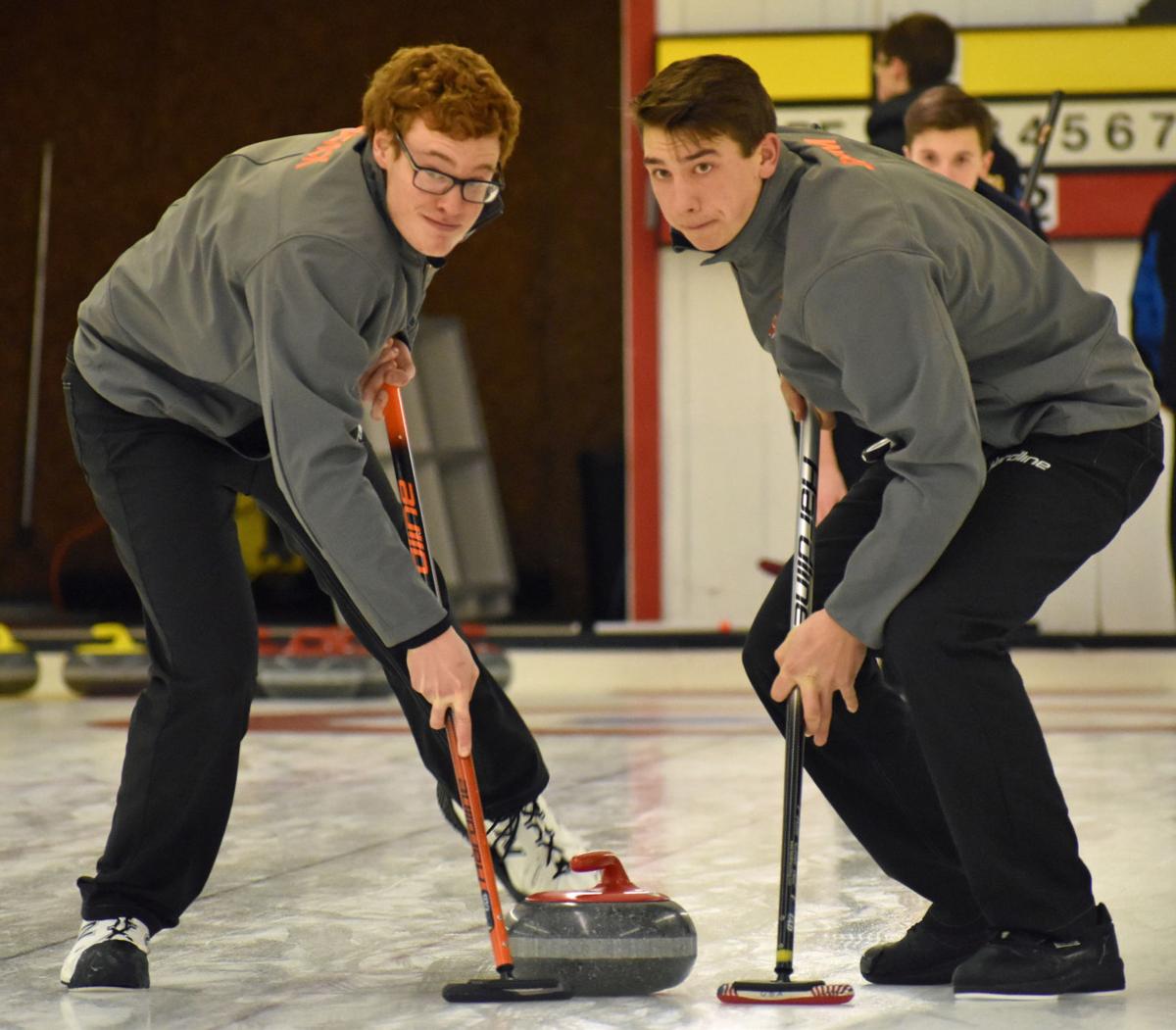 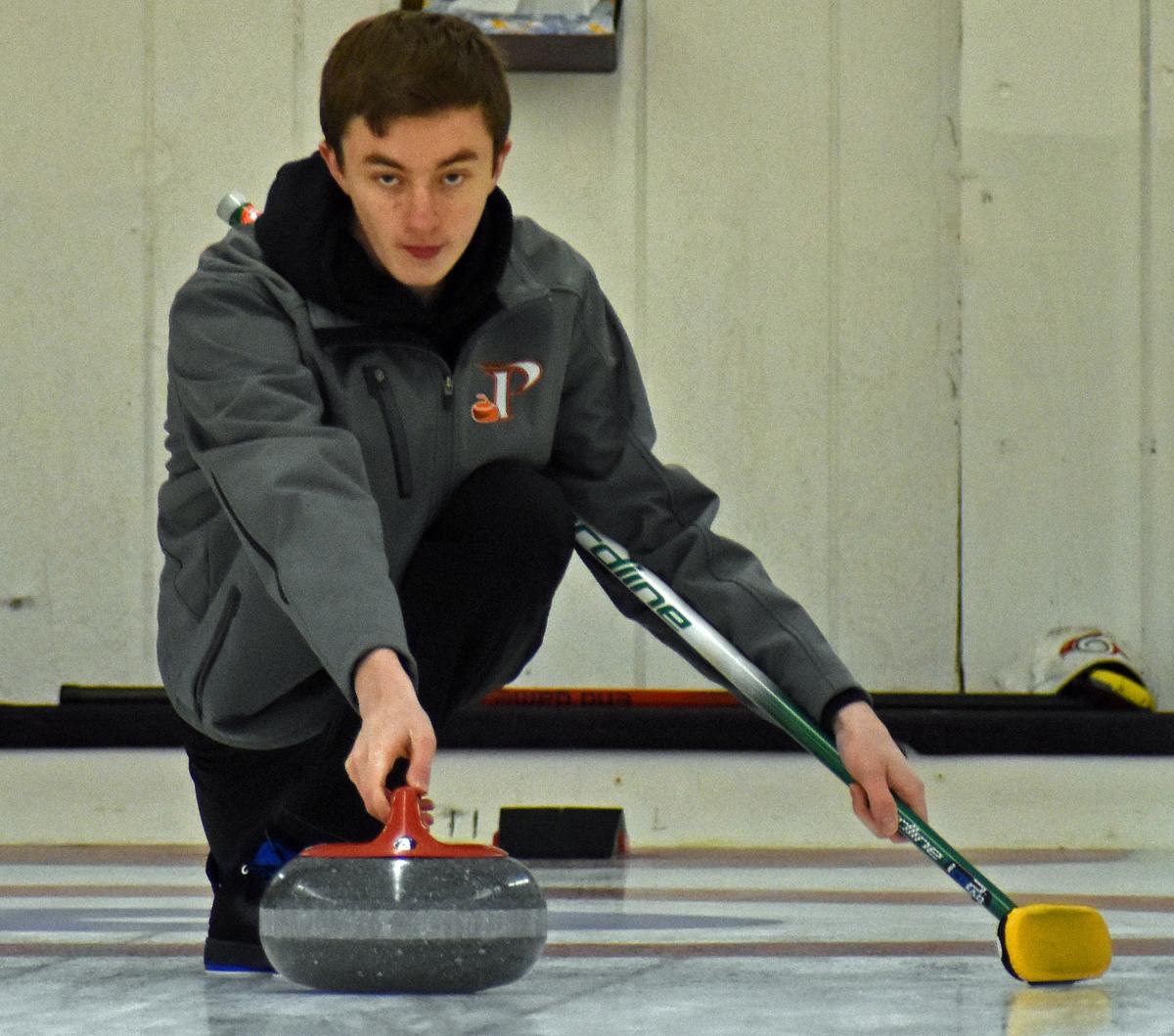 Portage skip Joe Charles releases a shot during his team's game wtih Pardeeville at the Portage Curling Club on Tuesday. 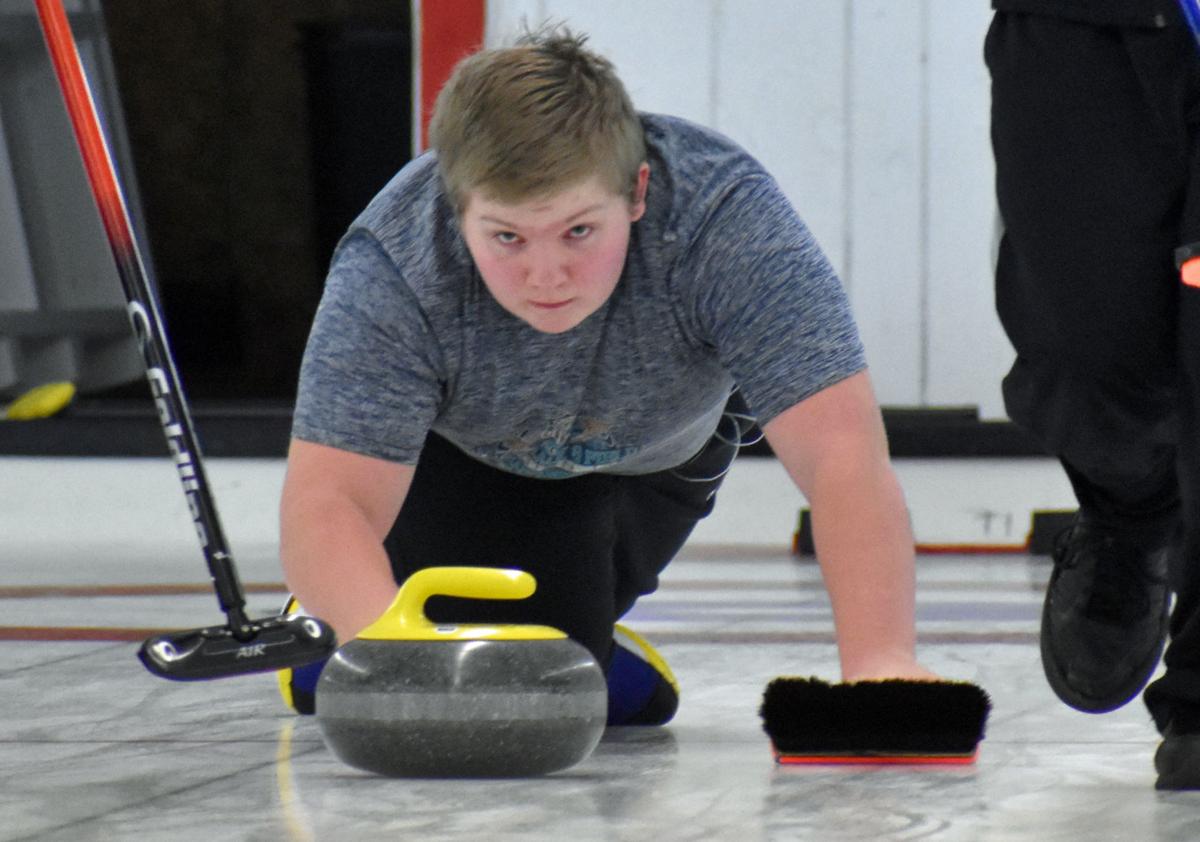 Pardeeville skip Kelby Crotty releases a stone during his team's game with Portage at the Portage Curling Club on Tuesday.

Watching your opponent score three in the opening end is usually a recipe for trouble, but the Pardeeville boys curling team proved that such a scenario doesn’t always lead to certain defeat.

The Pardeeville team, which was skipped by freshman Kelby Crotty, was down 3-0 after the first and, and 4-0 after two ends, but started to rally with two points in the third end. In the third end, Pardeeville was already sitting one when Crotty used his final rock to takeout Portage’s top rock, giving the Bulldogs two.

Pardeeville coach Amanda Seichter said her team was able to start its comeback by changing its approach.

“The boys just talked about how they had to change their strategy up a little bit and start focusing on getting their guards up front so we could draw behind and score some points,” Seichter said. “It took us a little bit to get going, but once they got the strategy going and it worked for them, they seemed to do very well.”

The Portage team, which was skipped by Joe Charles, and also included Noah Jahn at lead, Joe Brom at second and Emmett Benck at third, got one of those points back in fourth end to make it 5-2, but just missed out on scoring a pair. A measurement was required to prove that Pardeeville’s top rock was just a hair closer to the button than Portage’s second rock, holding the Warriors to just a single point.

The Crotty rink, which also included Easton Achterberg at lead, Alex Kuhn at second and Nathan Brant at third, continued to close the gap, scoring a pair in the fifth end to make it 5-4. Portage’s final rock in the end bounced off a guard, which allowed Crotty to draw for two with the final stone of the end.

Pardeeville (2-1 in Southern Conference) scored one in the sixth to pull even with the Warriors. On the final shot of the end, Charles used a takeout to eliminate Pardeeville’s top rock, but the shot rolled too far, allowing the Bulldogs to steal one point.

The Bulldogs took their first lead with another steal in the seventh. Crotty’s final shot settled right on the button, and Portage’s takeout attempt on the final shot was off the mark, allowing Pardeeville to take a 6-5 lead.

In the final end, a Portage miscue allowed Pardeeville to get the top two stones in the house. Crotty then put up a guard with his final stone. There was still a small opening for Portage to draw into, but Portage’s final shot clipped a guard, giving the Bulldogs an 8-5 victory.

Portage (2-1) was forced to change its lineup for Tuesday’s match, at Braeden Scheibach was unavailable due to illness. Even without one of its top regulars, Portage coach Michael Statz was confident his team could get the win.

“I thought we had that right chemistry again tonight to start off with and then I think our weight just got away from us,” Statz said. “We couldn’t hit the draw, the takeouts were coming out narrow. We just got outplayed.”

Seichter was happy to see her team get the victory, which improved it to 2-1 in the Southern Conference, and likely keeps its league title hopes alive.

“I’m just proud of the boys. They’ve come a long way,” Seichter said. “We have a very young team. We’re learning. Our skip is only a freshman, so we’re building as we go, and it’s just great to see how much they’ve grown since November. They’re working really well as a team, and they have a good lineup. We’ve switched our lineup a little bit, and it seems to be working well for them.”

Statz knows there is still plenty time of turns things around, as all four teams in the league have at least one loss at the midway point of the season.

“The chemistry is coming around. It’s still early in the conference. We got another round to go,” Statz said. “We’re not out of that yet. We did get two teams to qualify for state, which is good. We’re just trying to get things to gel a little bit. Hopefully the sickness that’s going through the school is going to work its way out pretty soon.”

WAUPUN — The circus wasn’t in town or anything like that, but a tight-rope act ensued nonetheless.

The Badger Conference won’t be holding conference competitions during the 2020 fall sports season. But that doesn’t necessarily mean there won…

Art Kabelowsky: It's time to call off the prep football season in Wisconsin

The risk of re-igniting the COVID-19 pandemic, putting lives and future health at risk, outweighs the toll paid by student-athletes losing the chance to compete.

Wilke averaged 16.6 points and 7.4 rebounds as a junior in leading Beaver Dam to a 23-3 record and earning first-team all-state honors.

Pardeeville's Easton Achterberg, left, and teammate Alex Kuhn sweep ahead of a stone during a Southern Conference match against Portage at the Portage Curling Club on Tuesday.

Portage skip Joe Charles releases a shot during his team's game wtih Pardeeville at the Portage Curling Club on Tuesday.

Pardeeville skip Kelby Crotty releases a stone during his team's game with Portage at the Portage Curling Club on Tuesday.