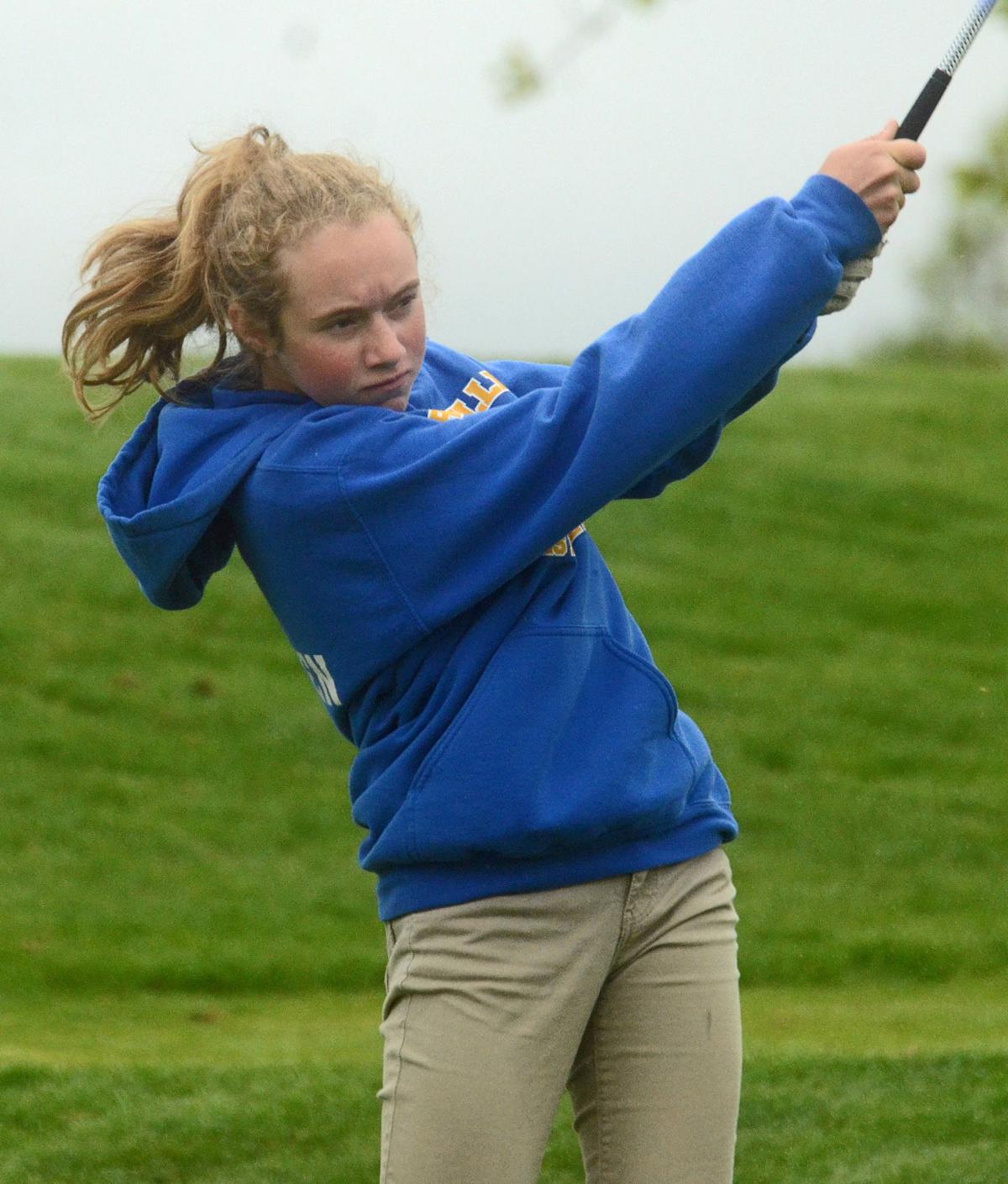 Pardeeville's Kylee Barden hits a tee shot while playing in the 2019 WIAA Division 3 Madison Abundant Life Sectional at The Oaks Golf Course in Cottage Grove. Barden and the Bulldogs finished second as a team at Tuesday's Trailways South mini-meet. 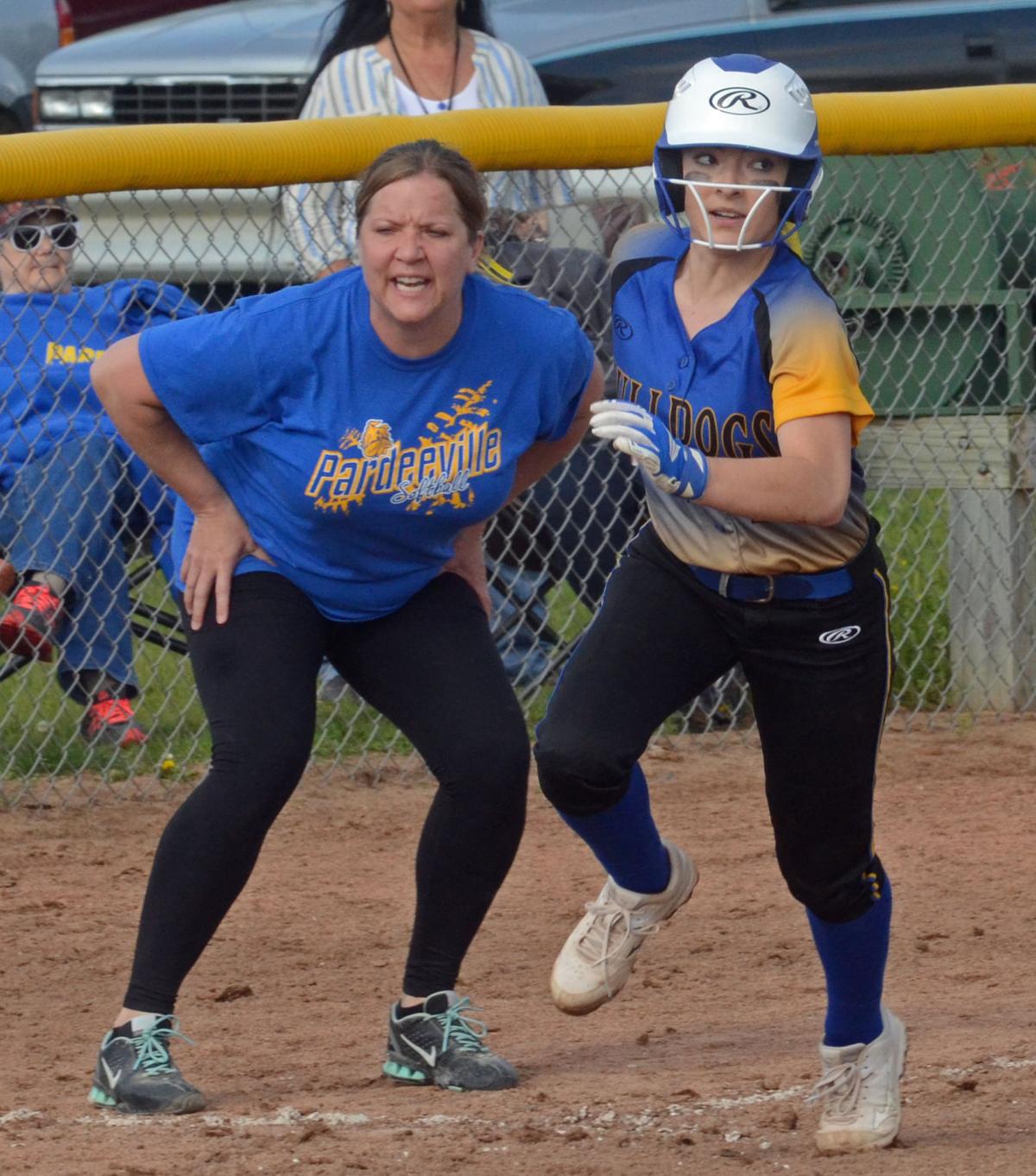 The Pardeeville prep boys golf team continued its strong start to the season on Tuesday, shooting a 183 to finish in second place at its host Trailways South Conference mini-meet at Portage Country Club.

Helping lead the way for the Bulldogs was the duo of Peter Freye and Cooper Jenatschek, who each shot an 8-over-par 43. Freye and Jenatschek each carded pars on the par-3 third hole, while Freye also shot a par on the par-5 ninth.

Alongside the top pair, Jayce Pargman shot a 47 and Kylee Barden scratched out a 50 for the Bulldogs. Ty Westbury shot a 58 to round out Pardeeville’s varsity quintet.

The Portage boys golf was unable to pick up its first dual meet win of the season on Tuesday as the Warriors fell to Beaver Dam, 205-220, in a Badger North Conference dual meet at Old Hickory Golf Club.

Ben Nortman shot an 8-over-par 44 to earn medalist honors and lead the Golden Beavers to a 15-stroke win over the Warriors. Leading the way for Portage was Jeremy Janisch as the junior shot a 14-over-par 50.

Janisch closed strong, shooting three straight bogeys to end his round after only one bogey over his first six holese. Behind Janisch was junior Chase Beckett, who shot an 18-over-par 54, including a bogey on the par-3 seventh hole.

Sophomore Luke Wilson shot a 57 while junior Mitchell Butson and senior Nick Starka shot a 59 and 60, respectively. The Warriors hit the links again on Friday with their host Portage Invite, which will also include Pardeeville and Beaver Dam.

A fast start fizzled out for the Montello softball team on Tuesday as the Hilltoppers surrendered 19 straight runs en route to a 21-6 loss to Wild Rose in a non-conference game at Montello High School.

Abby Bond had a double and Kennedy Calnin struck out three while allowing 11 earned runs on 18 hits and six walks over 4.1 innings to get the loss.

Montello hung tight after the first inning, trailing just 2-1 before the wheels ultimately fell off. After three runs in the second and another in the third, the Wildcats broke loose for eight runs in the fourth and another seven in the fifth for a 21-1 lead.

The Hilltoppers responded with five runs in the home half of the fifth, but it wasn’t enough to preserve things any longer. Laney Havlovitz fanned five and allowed just one hit and three walks in three innings of work to get the win for the Wildcats.

The sophomore also did plenty of damage at the plate as she was one of seven players with multiple hits, going 4-for-5 with a home run, a triple and two doubles, finishing a single short of the cycle.

Cambria-Friesland couldn’t keep pace with Markesan on Tuesday as the Hornets ended the game on an 11-2 run en route to a 12-3 win in a Trailways North Conference game at Markesan High School.

Sydney Jahnke went 3-for-3 while Mara Vande Brink went 2-for-3 with a double and three RBIs to help power the Hornets past the Toppers. After allowing a run in the home half of the first, Cambria-Friesland struck back for a run in the top of the second on an Alexis Johnson two-out RBI single.

Markesan had the answer however, scoring four in the bottom of the second before countering the Toppers’ two-run fourth with seven runs of its own to put things away for good. Sydnie Heller struck out six and allowed four earned runs on eight hits and three walks in the complete game loss for Cambria-Friesland, which committed eight errors.

The Pardeeville softball team faded after a spirited start on Tuesday in a 17-5 loss to Wisconsin Heights at Ann Achterberg Field in Pardeeville.

The Bulldogs were outhit 20 to 6 against the Vanguards and couldn’t keep up following a strong start. After Wisconsin Heights scored three runs in the top of the first inning, Pardeeville punched back with a three-spot of its own in the home half.

The momentum ceased from there though as the Vanguard scored three in the second and two more in the fourth for an 8-3 lead. Pardeeville hung around, using runs in the home halves of the fourth and sixth to stay within 10-5, but a seven-run seventh inning by the Vanguards all but squashed any chance at a comeback.

Sydnie Wheeler and Hailie Gilbert each went 2-for-4, while Brooke Peterson had a triple for the Bulldogs. Sara Ott struck out four and allowed 14 earned runs on 20 hits and three walks in the complete game loss.

The Rio baseball team let a late lead slip away on Tuesday as the Vikings fell to Orfordville Parkview, 17-5, in a Trailways South Conference game at Fireman’s Park in Rio.

Tyson Prochnow and Gavin Grams each went 2-for-3 while Cody Bartelt had a double to fuel to the Vikings in the loss. After a rough start, Rio escaped a three-run hole as it pushed across five runs in the home half of the third to seize a 6-4 lead.

Prochnow, Ryan Risgaard, Daniel Smith and Grams each delivered RBI singles in the inning, but Parkview had the answer scoring three runs in the top of the fourth to retake the lead before tacking on 10 more in the top of the fifth to finish things off.

Evan Suer, Conner Simonson, Dylan Sorg and Tyler Oswald each had two hits for Parkview, while Risgaard Struck out two and gave up two runs on three walks and three hits in three innings of work.

No matter how special a play is on defense, an inability to avoid errors can haunt a baseball team.

PREP SOFTBALL: Portage starting to round corner, picks up first win of season at host invite

With a handful of new players fitting into its varsity rotation, the Portage softball team has struggled to smooth things out so far in a winl…

PREP BOYS GOLF: Portage turns in another solid round, but falls to Mt. Horeb, 171-192

Another promising round wasn’t enough for the Portage boys golf team on Wednesday.

Pardeeville's Kylee Barden hits a tee shot while playing in the 2019 WIAA Division 3 Madison Abundant Life Sectional at The Oaks Golf Course in Cottage Grove. Barden and the Bulldogs finished second as a team at Tuesday's Trailways South mini-meet.