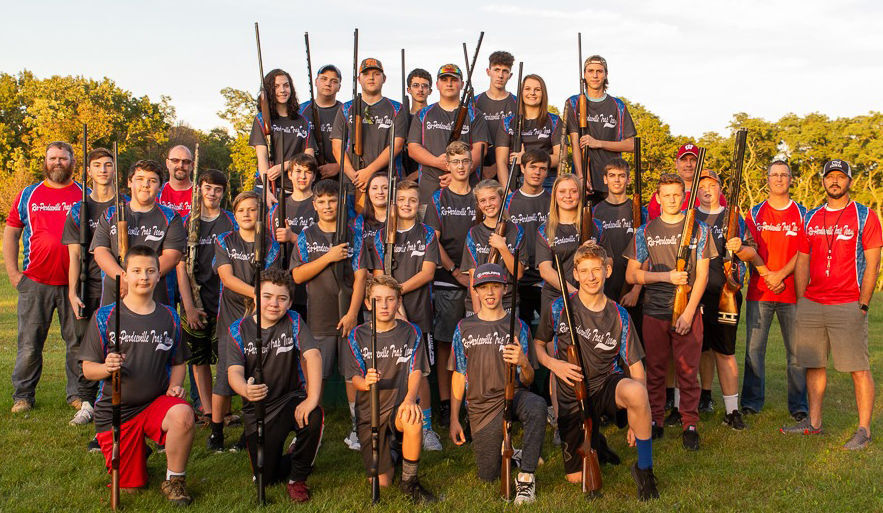 Members of the Rio/Pardeeville trap team have their photo taken last fall at the Rio Conservation Club. The team has had 23 of its members compete in a modified season this spring due to the COVID-19 pandemic. 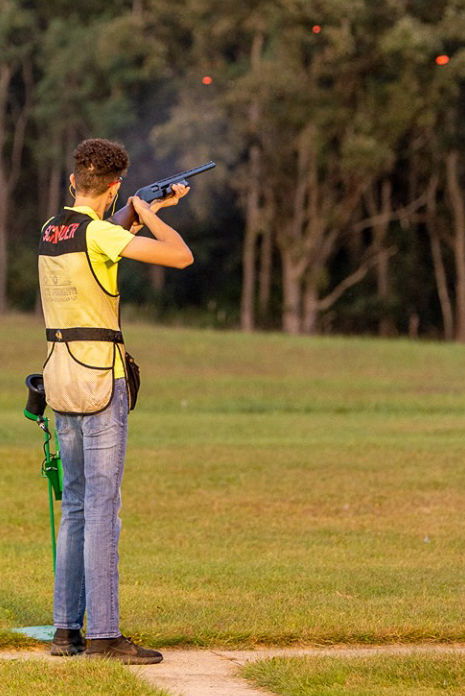 This spring, the area’s high school athletic fields have all been eerily silent. The sound of baseball and softball bats making contact, or the official’s starting gun going off to signal the start of a race at a track meet have all gone away due to the COVID-19 pandemic, which forced schools to close and the WIAA to cancel the spring sports seasons.

And while most sports have not been able to continue, the Rio/Pardeeville trap team has found a way keep shooting. Head up to the Rio Conservation Club on a Monday evening, and you will find a good many of the team’s 23 shooters — ranging from 7th graders all the way up to seniors in high school — shooting their shotguns at the clay targets flying through the air.

The team, which is made up of students from both the Rio and Pardeeville schools, decided they wanted to try to have a season, and head coach Aaron Grodi was confident he could give those kids a safe environment to shoot this spring, even if the May 11 season start date was a little later than usual.

“The pandemic kind of made our season delay a little bit, because obviously nobody knew what and how we were going to do anything, and nobody did for any sports,” Grodi said. “But one of the things that was available to us, was the fact that it’s outside, and it’s a team sport, but it’s also an individual sport. So we can do social distancing, we can control access to locations and things like that. There is space between the kids when they are doing the shoot, so it’s a natural social distancing sport.”

The decision to continue shooting this spring wasn’t an easy one. Grodi estimates about 75 percent of the state’s high school teams decided to put together some form of a spring season. The Portage High School Clay Busters was not one of the teams that participated this spring, instead choosing to encourage kids to take part in the summer leagues at the Portage Rod and Gun Club.

Grotti said he made the decision to put together a six-week modified season after surveying team members.

“I did a poll of my kids, and my kids were itching to go and do something, because they had no sports, so that was a big struggle for them,” Grotti said. “It was really nice, because it gets them out of the house in a safe environment that they can go and actually do something that they love.”

The Rio/Pardeeville team, which is lettering sport at both high schools with an all-volunteer coaching staff, was expecting 39 shooters this spring, which would have been the most since the team formed five years ago. But when the pandemic hit in the beginning of March, that number dropped down to 23, as some kids made the decision to not participate in the modified spring season.

Pierson Schnieder, a junior at Rio High School, who has shot with the Rio/Pardeeville team in both the fall and spring seasons ever since he was in 7th grade, is one of the 23 kids that is shooting this spring. Schneider said he looks forward to shooting on Monday nights.

“It’s more fun now that there’s nothing (else) to do,” Schneider said. “Before I was busy and trap was just something I had to do, but now it’s something fun to do.”

Grotti said he’s noticed that the kids appreciate the opportunity to shoot this spring more than they have in the past.

“They’re very happy, very excited at the fact they have this opportunity to be able to do this, be able to shoot and get out of the house and go do something,” Grotti said. “We got a few new shooters, but typically, in the spring, they’ve shot at least one season in the fall. These are all kids that have shot. They know the deal, they know the routine and it’s nice for them to be out there and have some sense of normalcy.”

And while the season continues for the Rio/Pardeeville team’s it is far from a normal season. A typical shooting night is social affair, where teammates hang out before and after their time on the range. That can no longer happen this season.

Grotti said kids show up at the Rio Conservation Club before their scheduled 30-minute shooting window, and have to remain in their car in the parking lot until it is their time to shoot.

“We’ve kind of isolated and separated ourselves off geographically on the range, as well how we exit the range on and off,” Grott said. “They come in, they stay in the parking lot and stay in their cars. I go out and say ‘OK, you five, it’s your turn.’ They come out, we walk them on, they go on the range and they shoot. They don’t ever go towards the clubhouse. They’re off to the side, everything is safe, everything is controlled and nobody comes in direct contact with anybody.

“There is always social distancing. And then they exit straight to their cars after they’re done shooting and we say ‘have a nice night and we’ll see you next week.’”

Schneider said the only big difference is the number of people spectating.

“We kind of have to stay apart from each other. But we still pretty much shoot the same, there’s just nobody there to watch,” Schneider said. “Normally there are lot of people there to watch you, and you can talk to a lot of people.”

The kids shoot every Monday night — or Wednesday night if Mondays don’t work — and then have their scores entered into an online database. The scores are then compared with those from other teams that are from similar-sized schools.

The other major change to the season is that it will end in the middle of June without any state or national events to cap the season. The Wisconsin State High School Clay Target League cancelled its state competition, which was schedule to be held June 6-7 at the Wisconsin Trapshooting Association Shooting Complex located just south of Nekoosa in Rome.

The USA Clay Target League also cancelled its high school national championship, which was scheduled for July 8-12 in Mason, Michigan.

A University of Wisconsin study showed 65% of student-athletes suffered anxiety after schools and sports were halted last spring.

They waited months for the chance to get back out on the diamond again, and when that time finally arrived Wednesday night, members of Beaver …

WRESTLING: Beaver Dam, Horicon coaches weigh in on WIAA's push to grow the sport for girls

When Vincent Propson was in the middle of his job search as an administrator in education, he happened to come across one that seemed like a p…

One night after dismantling Laconia 10-2, the Waupun summer team improved its record to 3-1 with a 13-3 victory over Lomira/Theresa on Wednesd…

COLUMBUS — Joe Morris spent his spring cooped up at home in Columbus, like many other seniors around Wisconsin, not being able to play the spo…

When Vincent Propson was in the middle of his job search as an administrator in education, he happened to come across one that seemed like a p…

Members of the Rio/Pardeeville trap team have their photo taken last fall at the Rio Conservation Club. The team has had 23 of its members compete in a modified season this spring due to the COVID-19 pandemic.