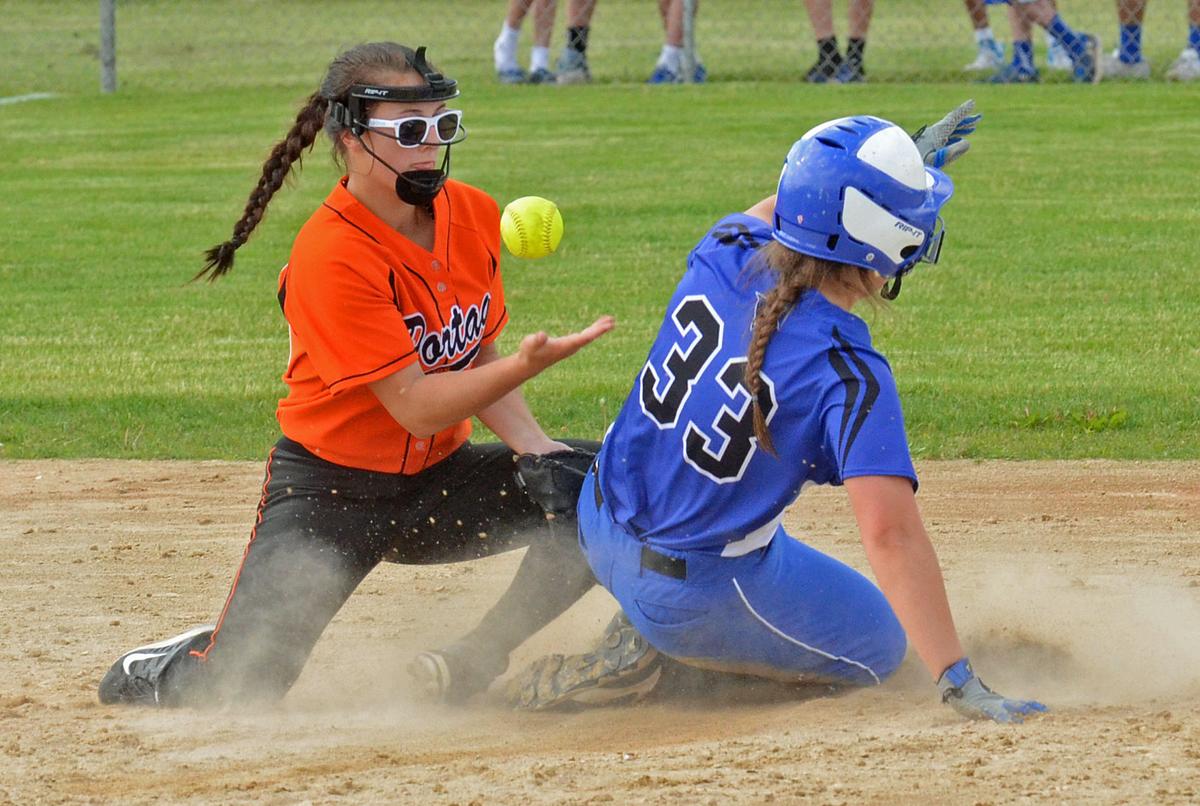 Portage shortstop Joia Simonson fields a throw as Evansville junior Sara Fredrickson steals second base in the ninth inning of a Division 2 regional final game in Evansville on Saturday. 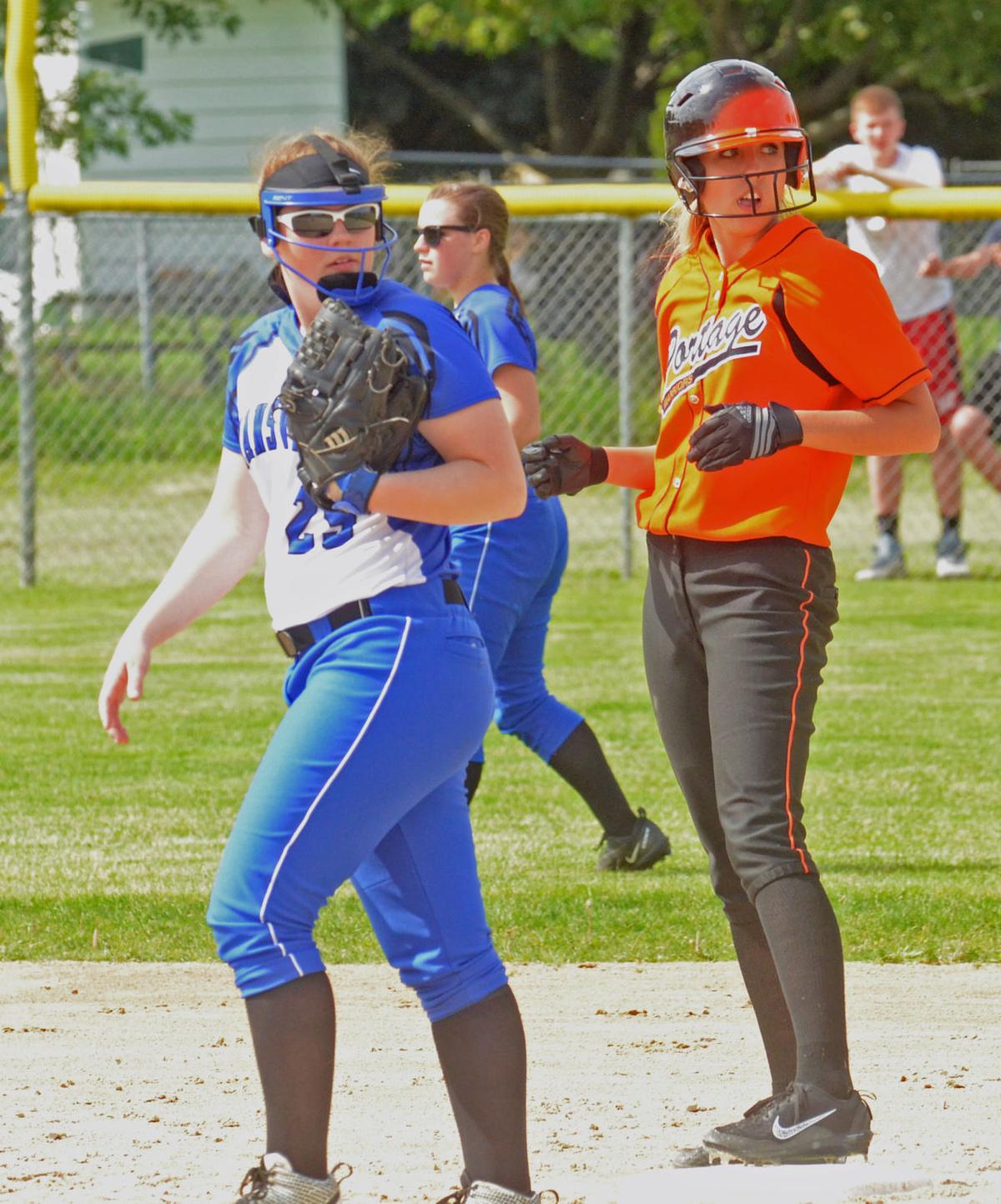 Portage senior Melissa Bublitz stands on second base after hitting a double to right field in the fifth inning of a Division 2 sectional final game in Evansville on Saturday. 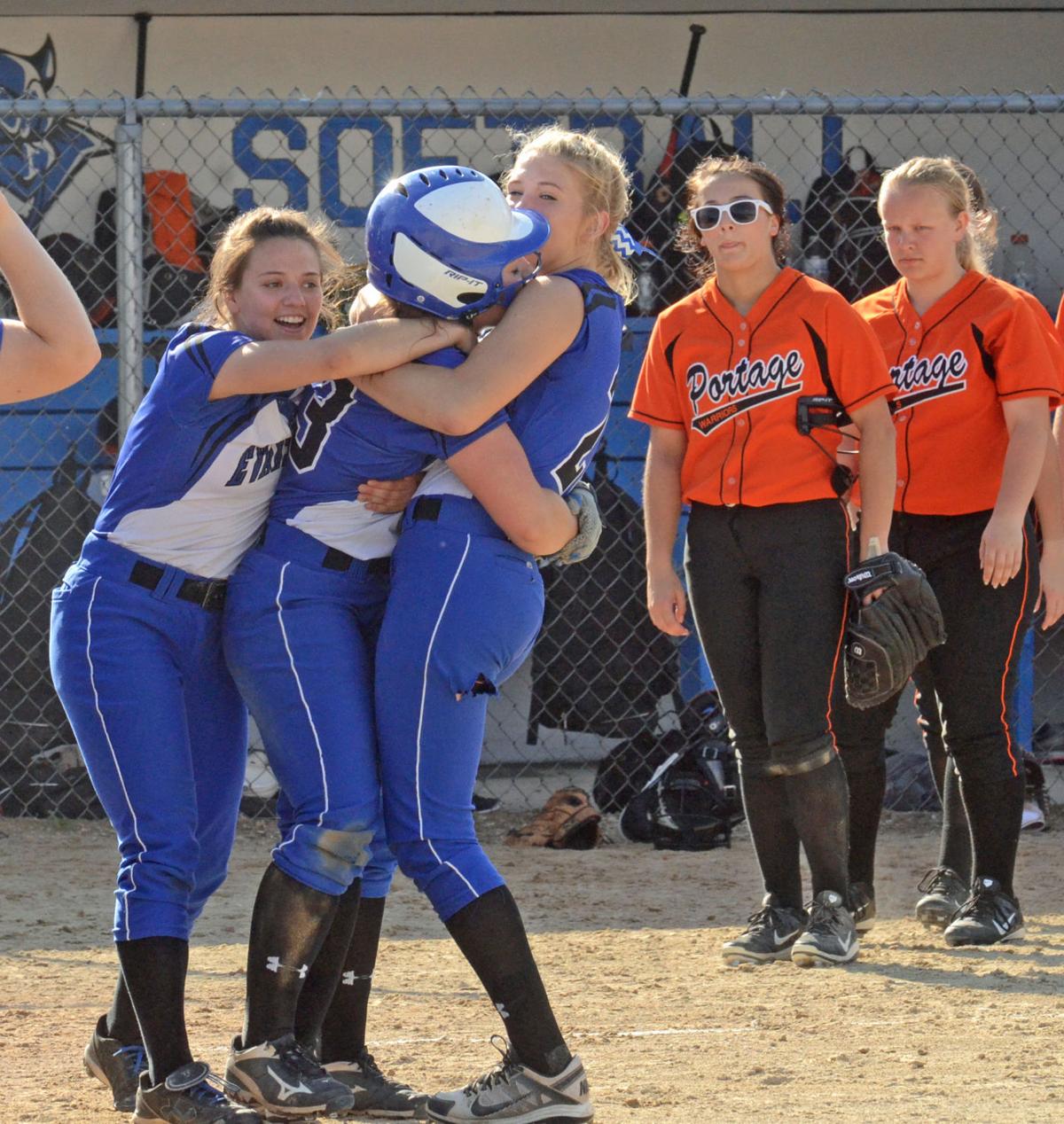 Evansville junior Sara Fredrickson, with helmet on, embraces two teammates after hitting a two-run, walkoff home run to beat Portage in the bottom of the 11th inning in a Division 2 regional final game in Evansville on Saturday.

EVANSVILLE – As the excitement grew with each scoreless inning during the Division 2 regional championship game between third-seeded Portage and second-seeded Evansville, it became evident that one team was going to earn a thrilling victory, while the other was going to experience a major heartbreak.

For the visiting Portage Warriors, it ended up being the agony of defeat that they would taste, as Evansville junior Sara Fredrickson broke the scoreless tie with a walk-off, two-run home run over the fence in left field with two outs in the 11th inning, giving the Blue Devils a 2-0 victory over the Warriors on Saturday afternoon.

With the win, Evansville (22-3) advances to play top-seeded McFarland in a sectional semifinal on Tuesday, while Portage (21-7) has its season end with the Warriors wondering what could have been had they been able to cash in one of their many scoring chances earlier in the game.

The loss spoiled an otherwise stellar pitching performance by Portage’s Meghan Witt. The junior left-hander held the Blue Devils to six hits, while walking just two and striking out 16 in her 10 2/3 innings pitched.

“Meghan was hitting her spots all night,” Portage co-head coach Connie Wampler said. “(Catcher) Olivia (Limmex) did a great job behind the plate of helping frame pitches and helping out. “(Witt) kept hitters off balance all night. (Fredrickson) is probably their best hitter. It was a great hit, but (Witt) pitched wonderful. She was great.”

Witt was especially dominant in the early going. She didn’t give up her first hit until the fourth inning, and Evansville only twice got a runner to second base over the first eight innings of play.

Evansville pitcher Kelsee Cashore was pretty good too. The senior didn’t give up a hit until Melissa Bublitz hit a double with two outs in the fifth inning, and ended up giving up eight hits, while walking two and striking out nine.

Portage did have some chances to score though, but failed to come up with the big hit when needed. The best chance for the Warriors came in the top of the 10th inning. Bublitz, who reached base three times in the game, led off the 10th with an infield single. Two batters later, Limmex singled to center, advancing Bublitz to third, and when the throw back into the infield went to third base, Limmex took second, giving the Warriors runners on second and third with just one out.

Next up was No. 2 hitter Joia Simonson, who singled in each of her previous two at bats, but she was retired on a pop up to the shortstop. Portage senior Alli Walker then had her chance to plate the game’s first run, but she grounded out on a comebacker to Cashore, ending the threat.

Portage also had at least one runner in scoring position in the second, fifth, seventh, ninth and 11th innings, but each time couldn’t get the hit it needed to put a run on the board.

“We got a lot kids on base and just could not get that next hit to get them moved around,” Wampler said.

Portage’s chance in the top of the 11th came when junior Nicole Weiss hit a double off the fence in right field with two outs. After a walk to junior Hanne Anderson, Bublitz hit a grounder to the shortstop, who threw high to freshman first baseman Emily Pfeil. Pfeil had to leave the bag to catch the ball, but was able to put a tag on Bublitz, possibly saving a Portage run from scoring.

In the next half inning, the Blue Devils were able to finally connect against Witt.

After freshman Hailey Elwood led the inning off with an infield single, Witt retired the next two batters on a fly out to center field and a sacrifice bunt that moved Elwood to second. That brought up No. 3 hitter Fredrickson, who hit a line drive over the fence in left field to end the game, and Portage’s season.

For Portage’s players coming back next season, Wampler hopes Saturday’s experience will help fuel them next season, when the Warriors will return eight of the 10 players that were in the starting lineup on Saturday, including Witt in the circle.

“It’s a huge confidence booster for all those underclassmen, knowing they can hit off a good pitcher,” Wampler said. “They made some great plays out there, and to just be able to mentally stay in the game for 11 innings is pretty difficult.”

And for Portage’s four seniors – Jessica Givens, Morgan Miles, Bublitz and Walker – who had their prep playing careers end on Saturday, each one played a key role to Portage’s 21-win season according to Wampler.

“Melissa Bublitz came up huge today. You can’t have a better last game for your career than that,” Wampler said. “Alli has been solid all season long. Morgan has been doing whatever we ask her to do, and the same thing for Jess Givens. These seniors had a great season. They were good leaders for us.”

Portage shortstop Joia Simonson fields a throw as Evansville junior Sara Fredrickson steals second base in the ninth inning of a Division 2 regional final game in Evansville on Saturday.

Portage senior Melissa Bublitz stands on second base after hitting a double to right field in the fifth inning of a Division 2 sectional final game in Evansville on Saturday.

Evansville junior Sara Fredrickson, with helmet on, embraces two teammates after hitting a two-run, walkoff home run to beat Portage in the bottom of the 11th inning in a Division 2 regional final game in Evansville on Saturday.