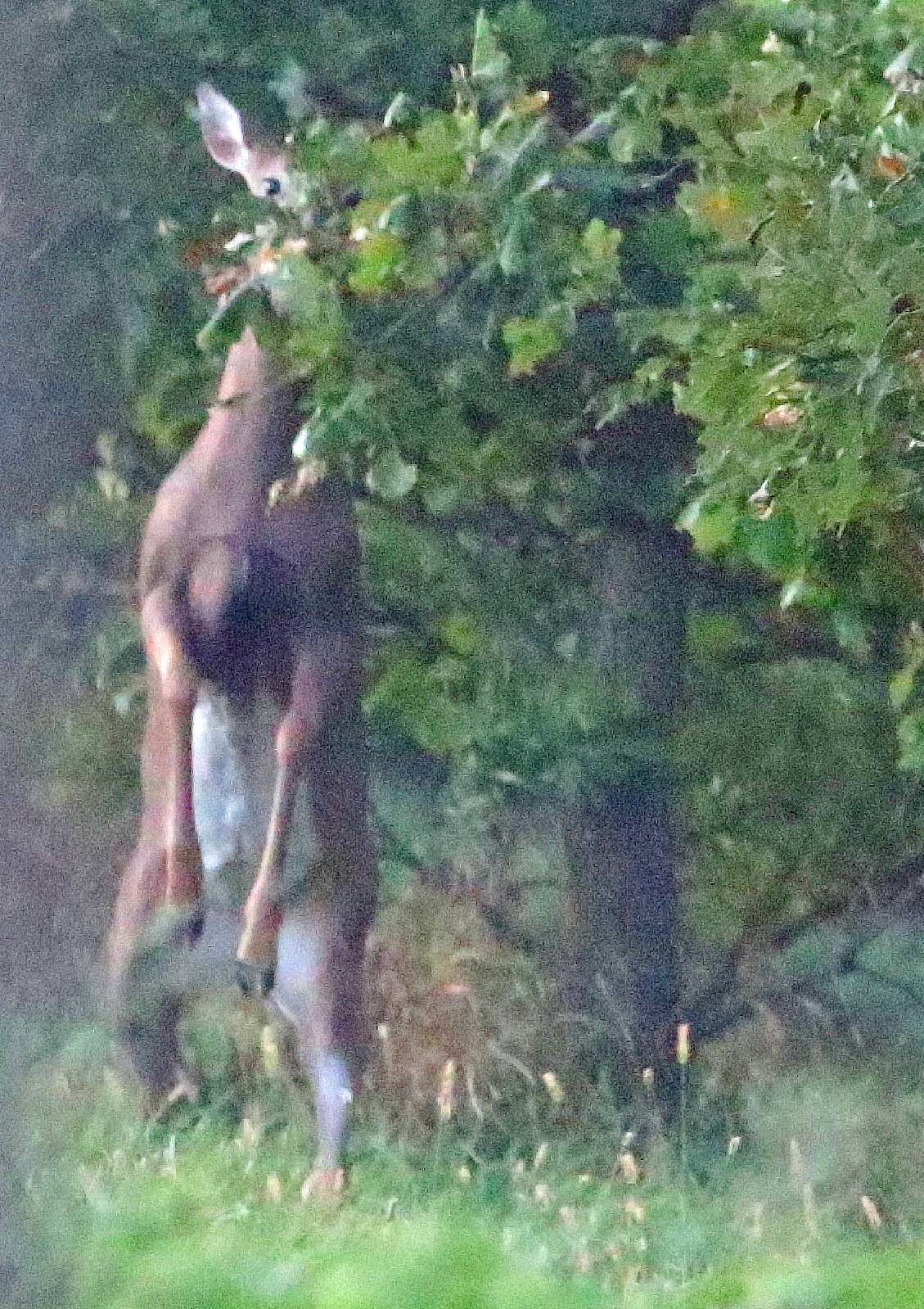 If the bur oak acorns don't fall, go up after them.

What a bramble to get into just to eat multiflora rose fruits. 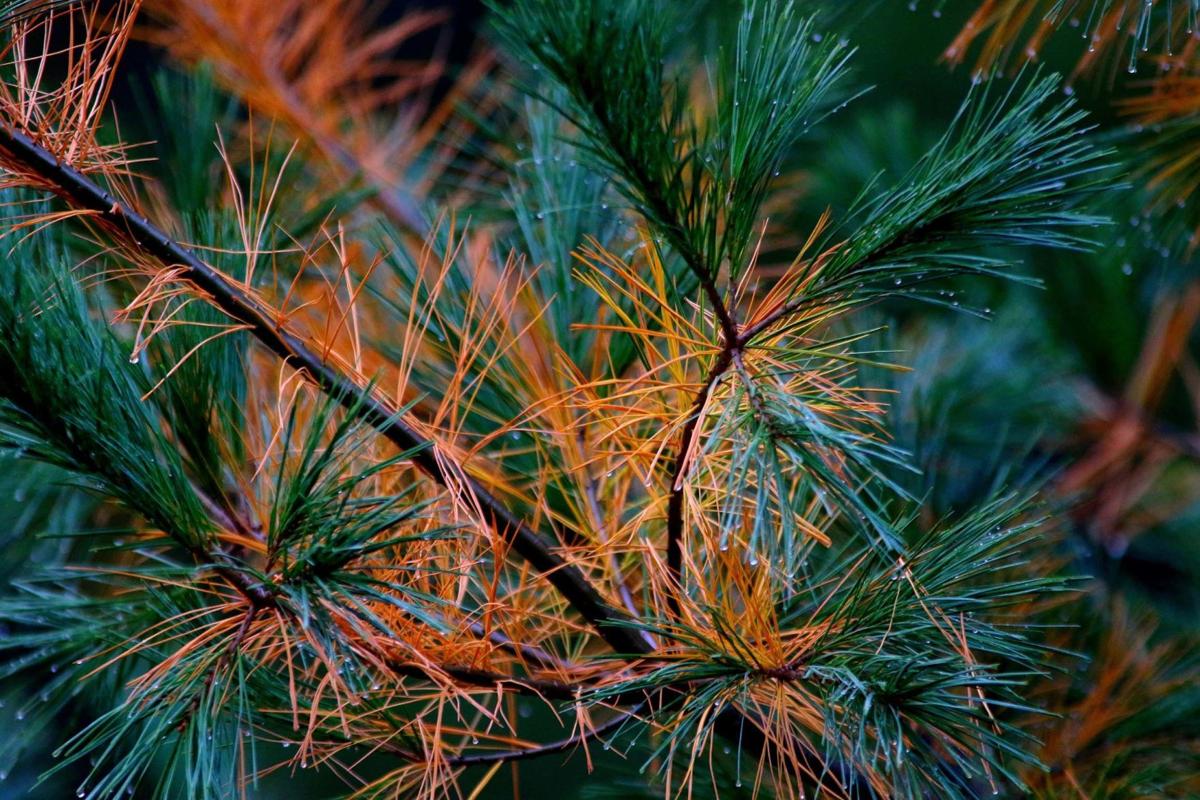 Even evergreens, including white pines. color and drop some needles annually. 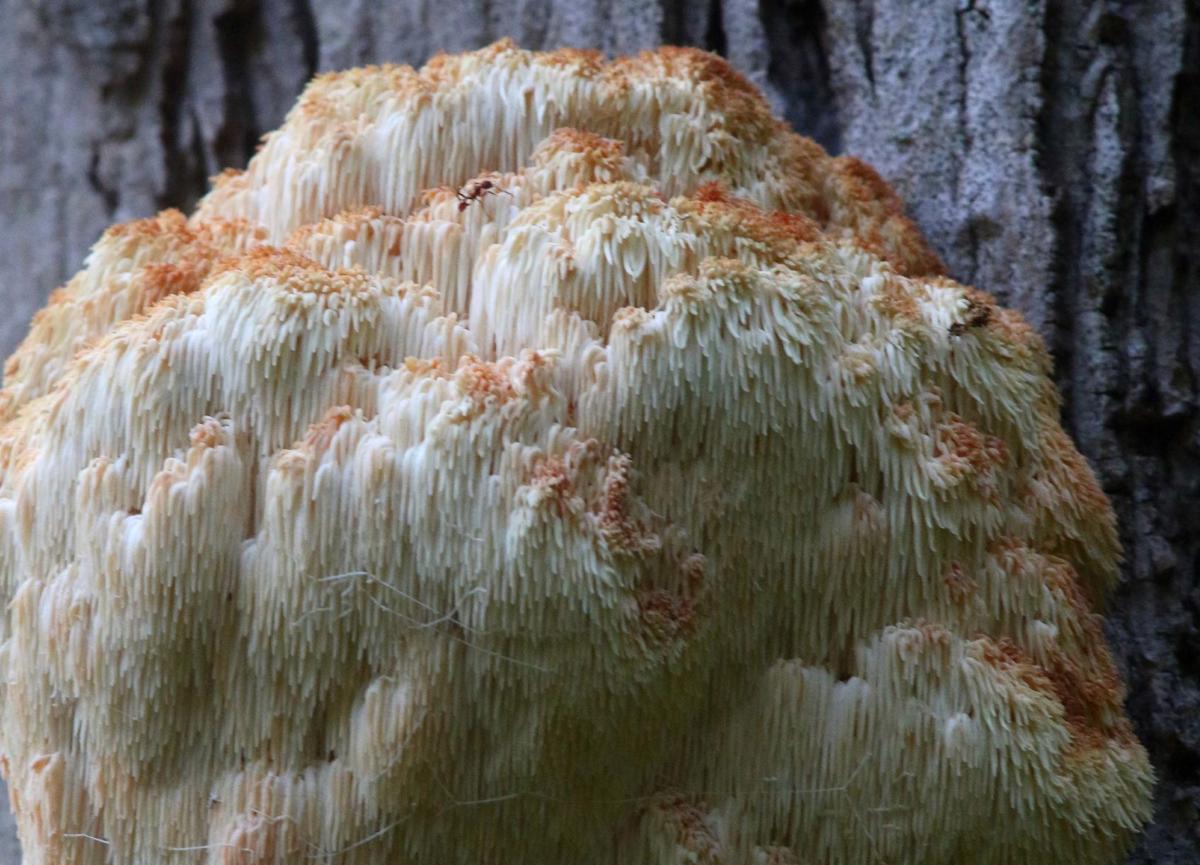 A tooth fungus, growing on a dead shagbark hickory tree, add some unusual texture to autumn 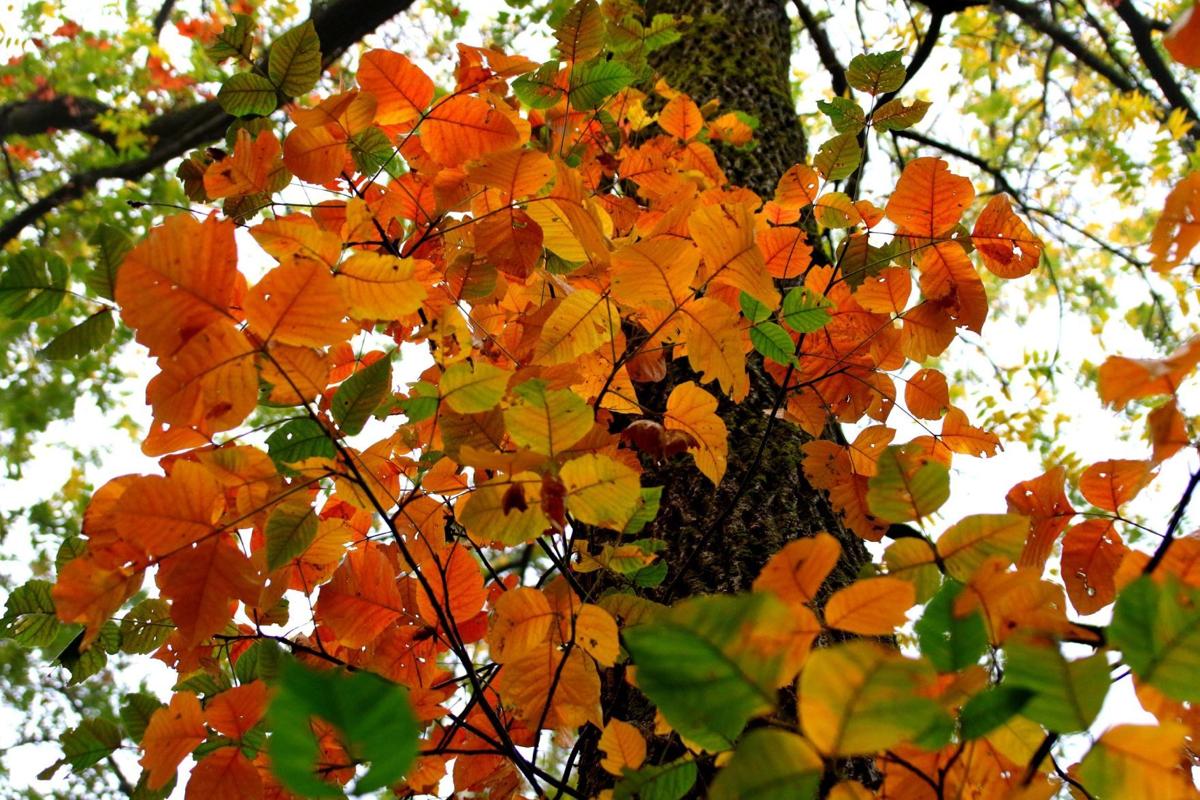 Changeover from green to gold, red, pink and amber crept in, surprising many who had been fascinated by the warm, dry end to summer.

A few spring bloomers, lilacs and magnolias got confused with the earlier cold snap and the summer-like temperatures lately.

Farther north, reports of an early peak color materialized. Changeover in the south is slower coming, maybe greater vegetation diversity, smaller woodlots, and a shortage of maples and aspens have this part trailing and not so conspicuous.

Locally, black walnut and birch leaves changed and began to fall while others were coming due. An ongoing battle materialized between deciduous leaves falling and other leaves transforming.

It’s a small fall here. Think of looking little and with an eye to art and it’s still very impressive and will continue sans wind and persistent rain.

Gathering seasons, hunting, catching, picking and admiring continue in southern Wisconsin and the weeks ahead.

Deer, turkeys, squirrels and people are finding the hard mast season mainly plentiful. Acorns in particular have taken deer, albeit temporarily, from the fields to the forests. Even with the swelling deer populations, there should be enough oak fruit to go around. Find the nuts; see the animals.

“I’m seeing rafts of turkeys feeding in the woods behind the farm with the incredible acorns and hickory nuts,” said Wayne Smith, in Lafayette County. “Water levels are still way down in places, which is sorry news, however, for trappers and waterfowlers.”

The season-ending lake sturgeon season may have been enhanced by the lower water level, at least in the Sauk City area, where Wally Banfi, of Wilderness Fish and Game, said 18 big fish were registered.

A 75-pounder and another 70-incher held the local season records throughout the season.

“We do need lower water temperatures to really turn the fish on, but the bite is still great, including fishing trout in Devil’s Lake,” Banfi said. “The colors are starting to pop.”

Doug Williams, of DW Sports Center in Portage, summed up the nut and fruit crops by saying “some butternuts, acorns lots, apples none, walnuts spotty and combining soybeans and corn in swing.”

Apple orchards, however, are managing. Warnings and told-you-so’s continue all around.

What does a man do when his business is research with rifle scopes? Jimmy Hamilton, at Vortex Optics, headquartered in Barneveld, gave some emergency, but sometimes costly, suggestions.

“Follow Minnesota, use shotguns; find shells first and then buy the rifle; make sure all’s tight and right before sighting a gun; try finding muzzleloader supplies; crossbows can be very accurate at short range,” he said.

“There won’t be much in the way of standing crops come deer season,” alerts Wayne Smith in the Blanchardville area. “It’s peak color in the north, bear and grouse hunters are saying.”

Broad-leafed trees do not have all the color. White pine needles are yellowing; some have dropped. Tamarack is about to lose them all.

White cedar is discarding some, too. Seed cones on many conifers have fallen or fallen apart (balsam). Watch ginkgos, this uncommon street tree often loses every leaf within several hours. Catch one in the act.

Migratory bird seasons are in play or beginning. Pheasant kicks in Oct. 16, while archery and crossbow seasons continue.

Registration summaries continue to be posted on the Department of Natural Resources website, with more than 8,500 animals already registered by archers and crossbow hunters.

Not all will last long. Set work aside and immerse in autumn.

If the bur oak acorns don't fall, go up after them.

What a bramble to get into just to eat multiflora rose fruits.

Even evergreens, including white pines. color and drop some needles annually.

A tooth fungus, growing on a dead shagbark hickory tree, add some unusual texture to autumn