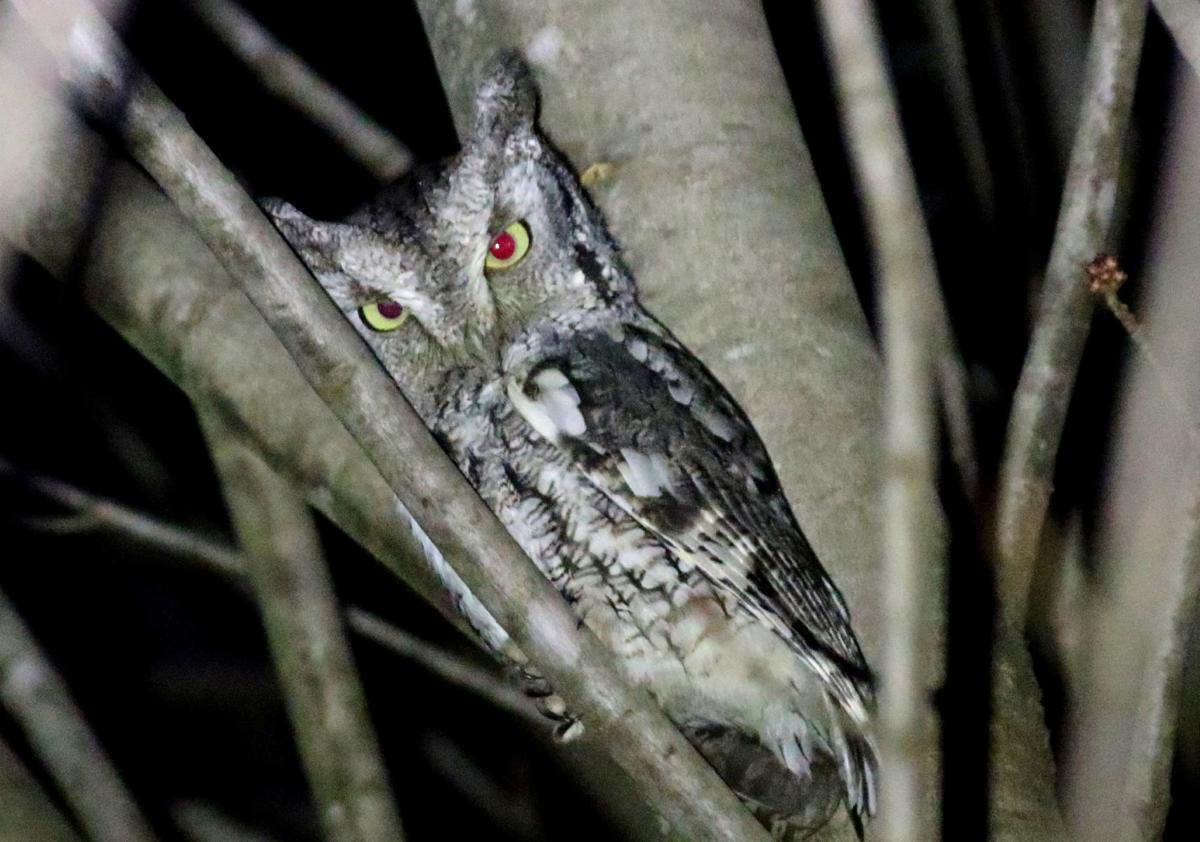 A gray phase screech owl tucks between several red maple limbs. The pupil areas are reflecting light back toward the camera. 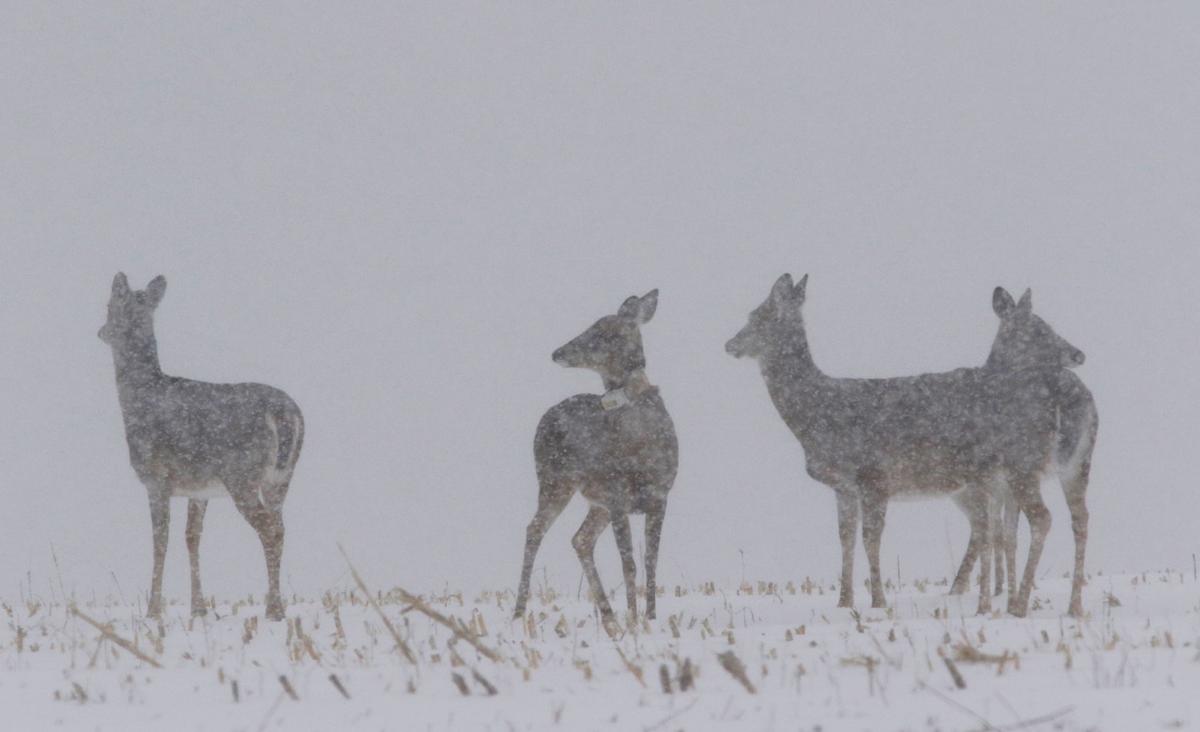 No, these are not piebald deer but snow-balled deer appearing to bewildered in a snowstorm.

Even though bald eagles, wild turkeys, barred owls and great-horned owls are busy, with either nesting duties, or gathering rafts of their own kind, they tend to go unnoticed.

The common owls, barred, great-horned and tiny screech owls are nocturnal birds, for the most part. Their flight is noticeably quiet and they can select the best camouflaging tree, even in a monoculture forest.

Unless night-hiking or coaxing a tom to sound off during turkey scouting, many big bird vocalizations go unnoticed, too. More uncommon owls, great grays and snowy ones, from Canada and beyond, may stay put for hours or longer, allowing birders time to text, phone or post “secret” locations for what might be a chance of a season or greater.

As large as eagles are, they can be equally secretive, scrunched down in a nest bowl with only a white softball-like head showing. Snow piled in treetops does fine at camouflaging an eagle’s head, it seems. Putting snow and a black bird body together may mean not seeing them when in plain sight.

A gray phase screech owl (there are rufous ones too) took flight from a pear tree when hit with a yard light beam, flying to a nearby red maple. Even with these deciduous tree perches, the bird’s plumage resembled old tree bark and lichens.

Artificial light in the bird’s face sent back a red glow from tissues behind the lenses. Other than moving its head, maybe for more perfect hearing, the bird remained motionless.

While owls may call during dark hours, wild turkeys are most vocal at other times. Sometimes barred owls will return calls to imitations made by human owl hooters. It’s worth a purchase to carry one of these devices on evening hikes along woodland lots.

Don Martin, at Martin’s in Monroe, mentioned that some ice fishers were having great luck panfishing on Madison’s Lake Monona, but changed their habits when the public health officials warned not to eat some Lake Monona fish more than weekly due to PFAS contamination (a host of chemicals linked to increased risks of cancer and other health problems). The chemicals have a number of sources, tend to build up in body tissues, and do not readily decompose.

Chuck Pohlman, at Wilderness Fish and Game in Sauk City, said ice fishers have been picking up bluegills and crappies in Lake Wisconsin bays, in reasonable ice. Coyote hunters have been having success calling and fur prices seem reasonable, too.

Recent lead poisoning of large birds (eagles and swans) reminded hunters and anglers to use alternative sources of shot and sinkers when possible.

In spite of normal Wisconsin winter now upon us, those who care to look can count a growing list of happenings suggesting some organisms are anxious, too. A few tree flower buds (some maples) appear larger; skunk cabbage is up but covered in snow banks in swampy areas, and an occasional chipmunk can be seen poking out at dawn just to get some fresh air.

Bird feeding continues to be a challenge, although feathered visitors are more numerous with recent ground cover. Sometimes simple works best, like a few kernels from an ear of corn ear, smashed on cold concrete for the ground feeding juncos, who don’t seem to be able to shell a black oil sunflower fruit.

Remove some of the snow under feeders or where ground feed is provided.

Even a dab of outdoors is sufficient and feels fine, if for no more than a few minutes. Watch your step. There are structures inside those limbs who depend on you to walk proper.

The Columbus-Fall River varsity bowling team pre-bowled for its scheduled meet in Beaver Dam last week, so members didn't find out how they di…

Ah, those winter days when 9 inches of snow piles, blows and bends backs.

A gray phase screech owl tucks between several red maple limbs. The pupil areas are reflecting light back toward the camera.

No, these are not piebald deer but snow-balled deer appearing to bewildered in a snowstorm.