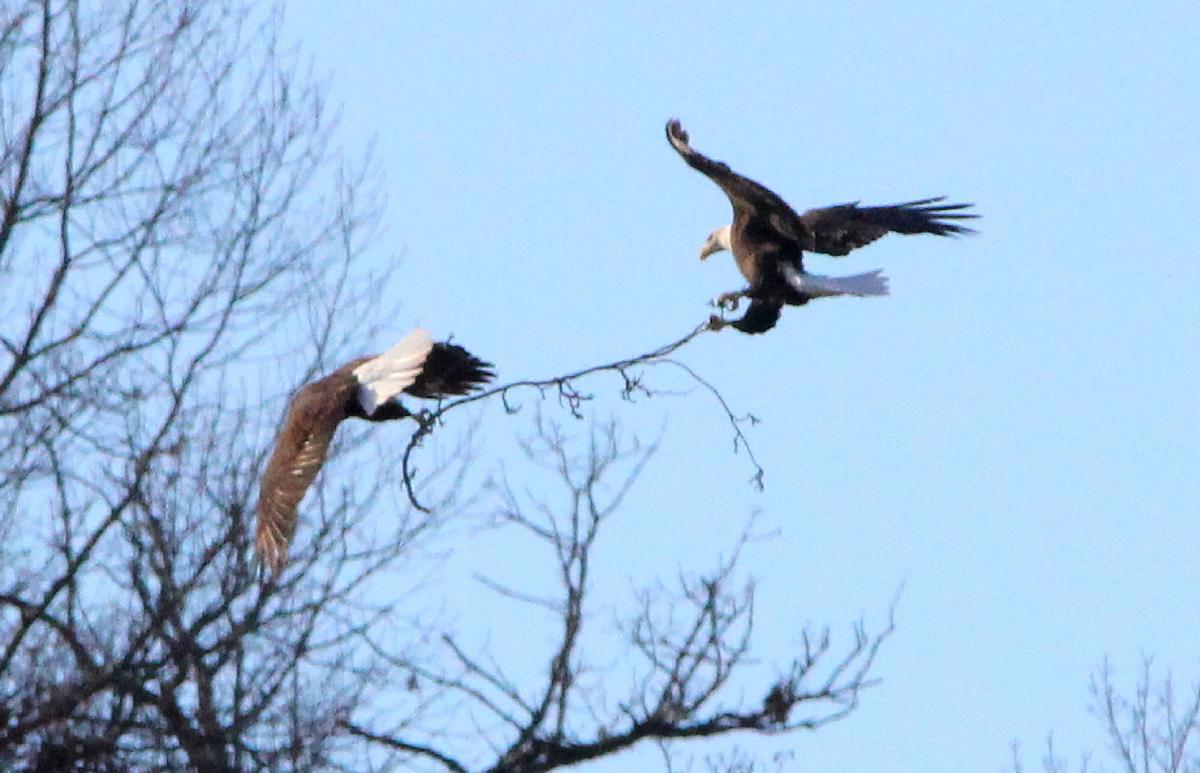 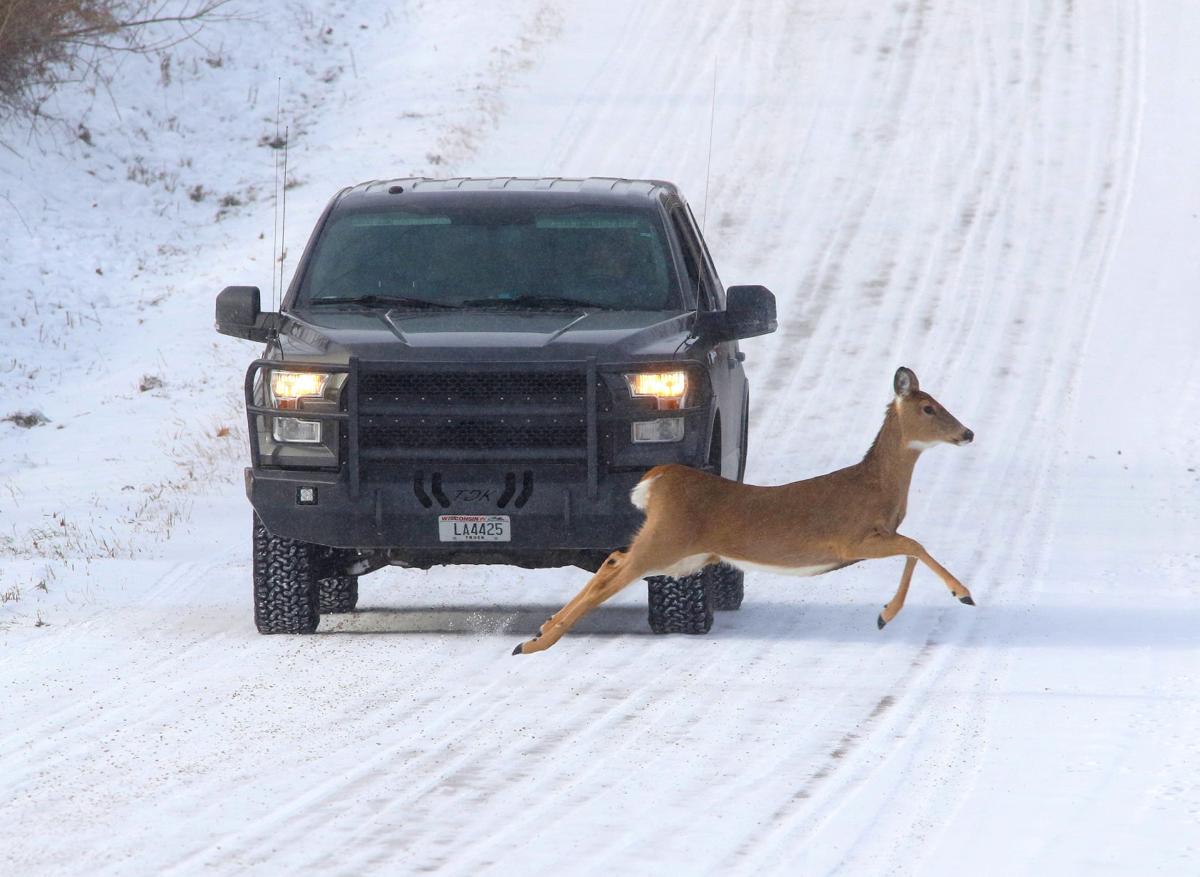 Deer are bounding any time, any place. This truck stopped to let several deer pass in safety. 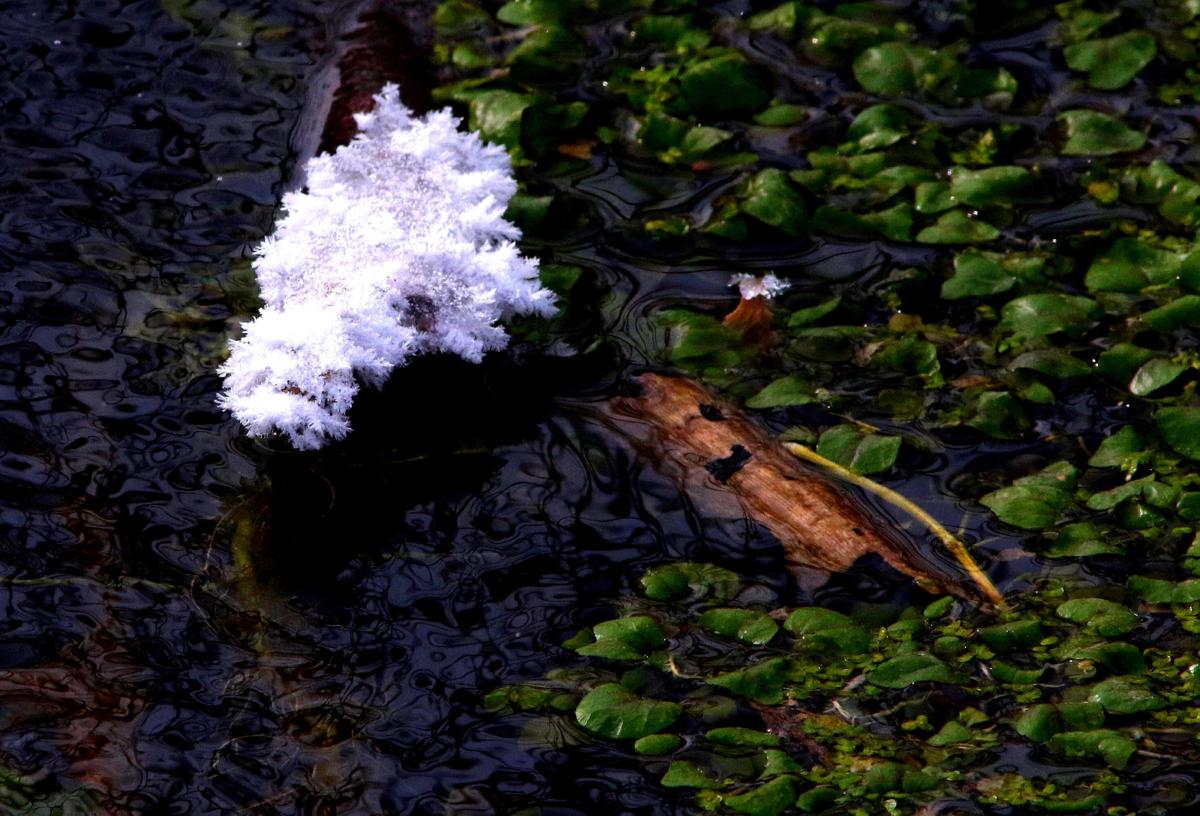 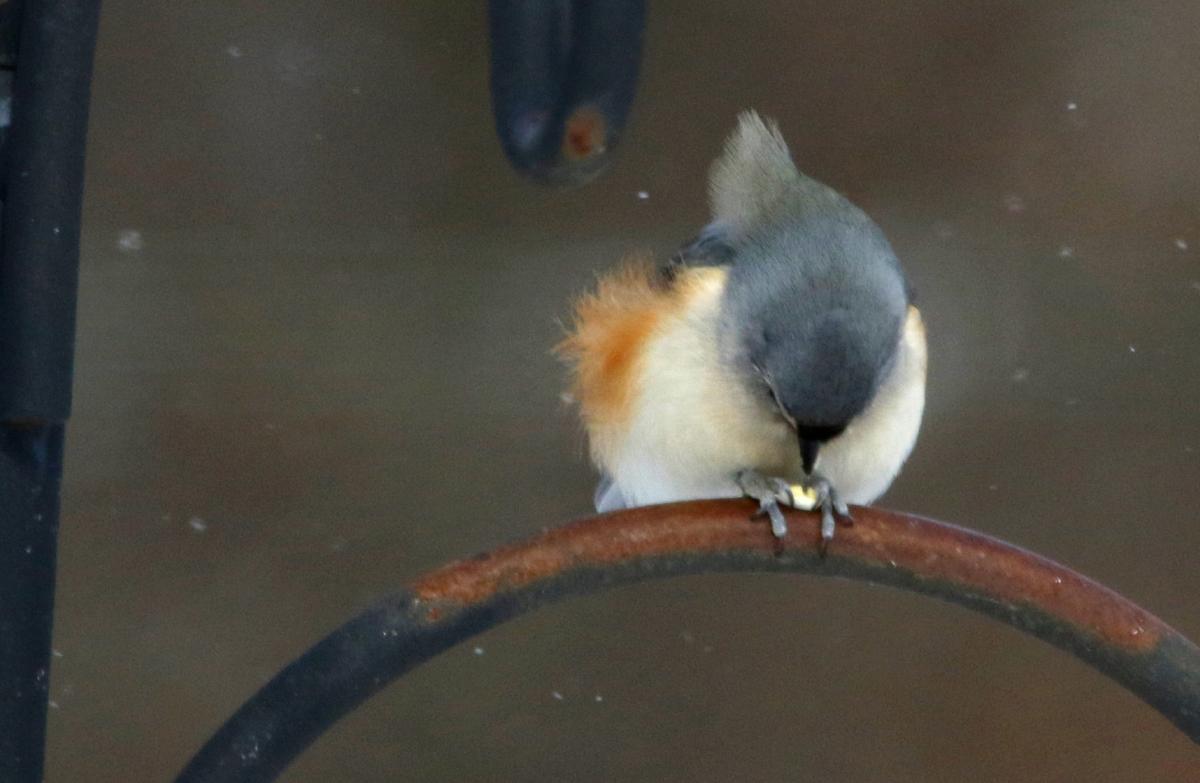 Tiny tufted titmice usually grab a seed and fruit and eat on a nearby perch. 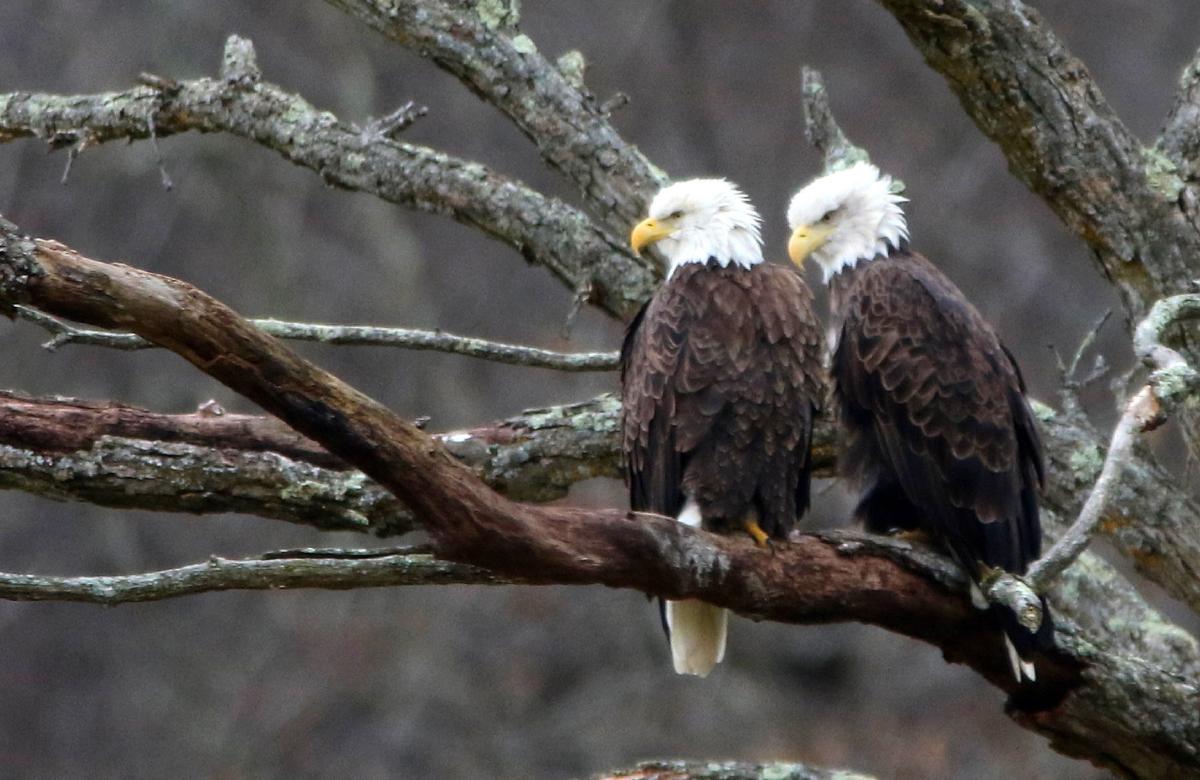 Now is when bald eagle pairs are common, easily observed, and may not be so timid. Still, stay your distance.

Several communities along the Mississippi and Wisconsin rivers host eagle days to make viewing more educational, but some watchers prefer to do it solo one nest, one pair, or one feeding area at a time.

Nest repair can go on with little notice, but even a causal observation puts us at awe with size, weight, and mass of these perennial, two-ton nests. After years of watching nests during January and February, eagle pair teamwork may not be apparent with one bird on each end of sticks, limbs, and vines flying toward a nest.

The immature bald eagles play no role in these activities, except competing for food at a road kill or field carcass, often a deer. At times, while not Wisconsin nesters, golden eagles will frequent during winter searching for food, too.

This makes four possible eagle sightings, mature and immature bald and golden eagles; all are all possible.

Except for some owls, and other than eagles, common feeder birds are not nest-building and laying eggs in January or February. Still, there is plenty of activity around feeders, water sources, and perching areas.

“There is a ton of birds visiting my feeders,” said Doug Williams at DW Sports Center in Portage. “Don’t stop feeding, even for a day.”

“Make sure feeders are full every day,” said Bob Ross, Wild Birds Unlimited, in Middleton. “The birds need more feed to stay warm. Finches are devouring nyjer (thistle) seed. Some days I’ll have numerous birds on a sock feeder. Same with water because it evaporates and birds drink and bathe.”

He recommends, for the cold weather and otherwise, too, to offer black and striped sunflowers, sunflower hearts, peanut halves, and safflower, while prime plus mixes include cherries, cranberries, calcium, tree nut pieces in addition to the aforementioned morsels.

Hooper feeders work well with mixtures because larger pieces of fruits and nuts do not get stuck.

Some birds, including chickadees and titmice, are grab-and-go eaters, leaving as soon as they pick a piece. They need a perch to go to, such as a shrub or old Christmas tree. Spent limbs, loosely piled also work.

While ice fishing is beginning to go gang busters, almost anywhere, anyhow, trout angles are picking their days and making them pay.

Bret Schultz, in Black Earth was out opening Saturday and the Tuesday after. “There was someone fishing on Tuesday morning at the first two spots I was going to try,” he said.

Schultz uses the same flies he uses in June. “I start in January and run them through to June most years. Once in a while I’ll go to nymphs and fish deep holes, but generally it’s the ripples, dropping the fly on the opposite side of the ripple and pulling it across. Much of the time the fish are in the trough on my side of the ripple. I can cover more water in 1/3 the time this way.”

Hooking can be touchy and Schultz describes setting by daydreaming, so as not to pull the hook out of the fish’s mouth but make sure the trout has taken the fly. Don’t get over-anxious.

“I tied the same pattern I always use but tied it smaller this year,” he said.

Results? He netted 14 fish Saturday and 8 on Tuesday in a few hours on each outing.

This week appears to have a number of days in the 30’s. Usually it is not the early bird that catches the trout, however.

“Ice fishing has really taken off,” Williams said. “It seems to be good all over.”

How long this lasts depends on ice, temperature, sunny days and more. Remember the adage, “First ice or wait for open water.” Test the hypothesis, take a white jig with blue and orange dots and give it a try.

“Anglers have been happy with ice fishing success, mostly back waters of major rivers,” Don Martin, at Martin’s in Monroe, said. “Gun sales continue to be good, that and ice fishing bait and jigs.”

Upcoming events include Free Fishing Weekend January 15-16, 2022, throughout the state; including ice fishing, open water, and trout fishing. License and stamps are unnecessary but all other rules apply including length and bag limits. The trout season, catch and release, stays.

Preliminary turkey registrations (season closed Jan. 9, 2022) include 3,323 birds with all zones falling below the 2020 figure of

Marcescent oaks (holding leaves) are looking more open with recent winds. Leaves on and off these oaks are taken for food by deer as they dig for acorns under the oaks.

The 2015 Portage grad has turned his outdoor hobby into a growing pet project covering all things outdoors.

Deer are bounding any time, any place. This truck stopped to let several deer pass in safety.

Tiny tufted titmice usually grab a seed and fruit and eat on a nearby perch.