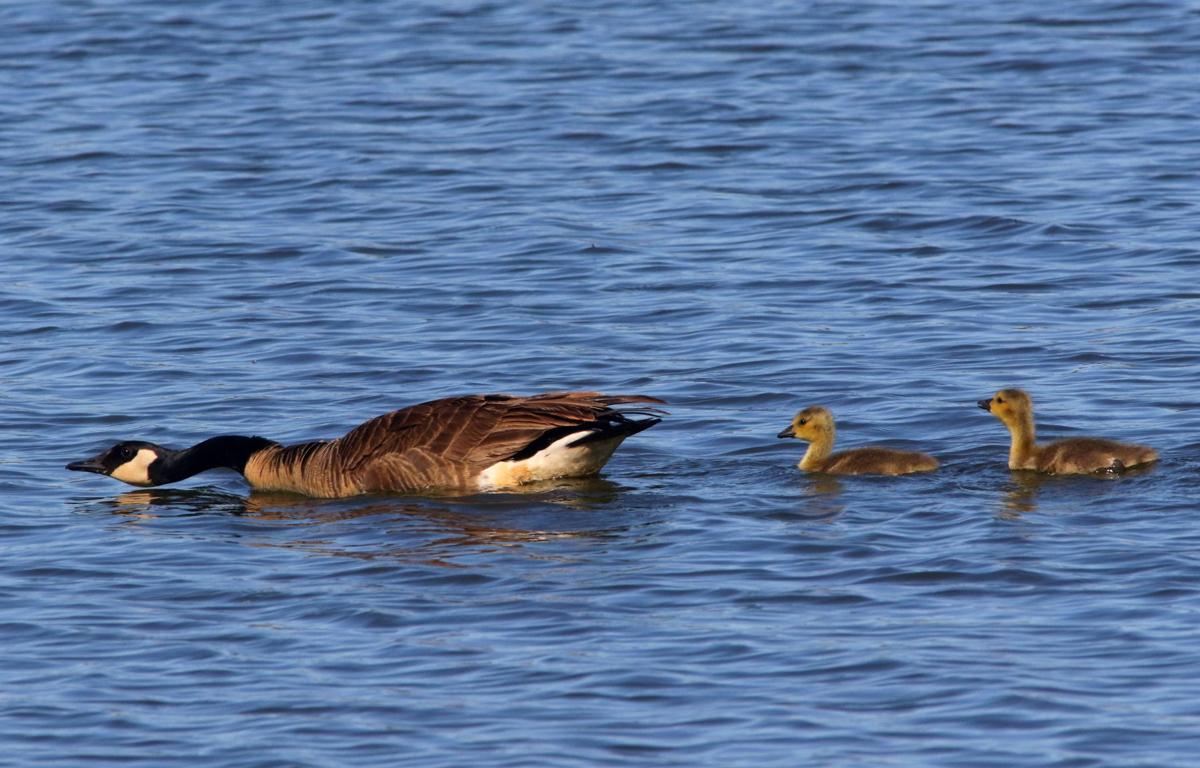 Two Canada geese goslings follow their mother, who must be hinting something with your swimming posture. 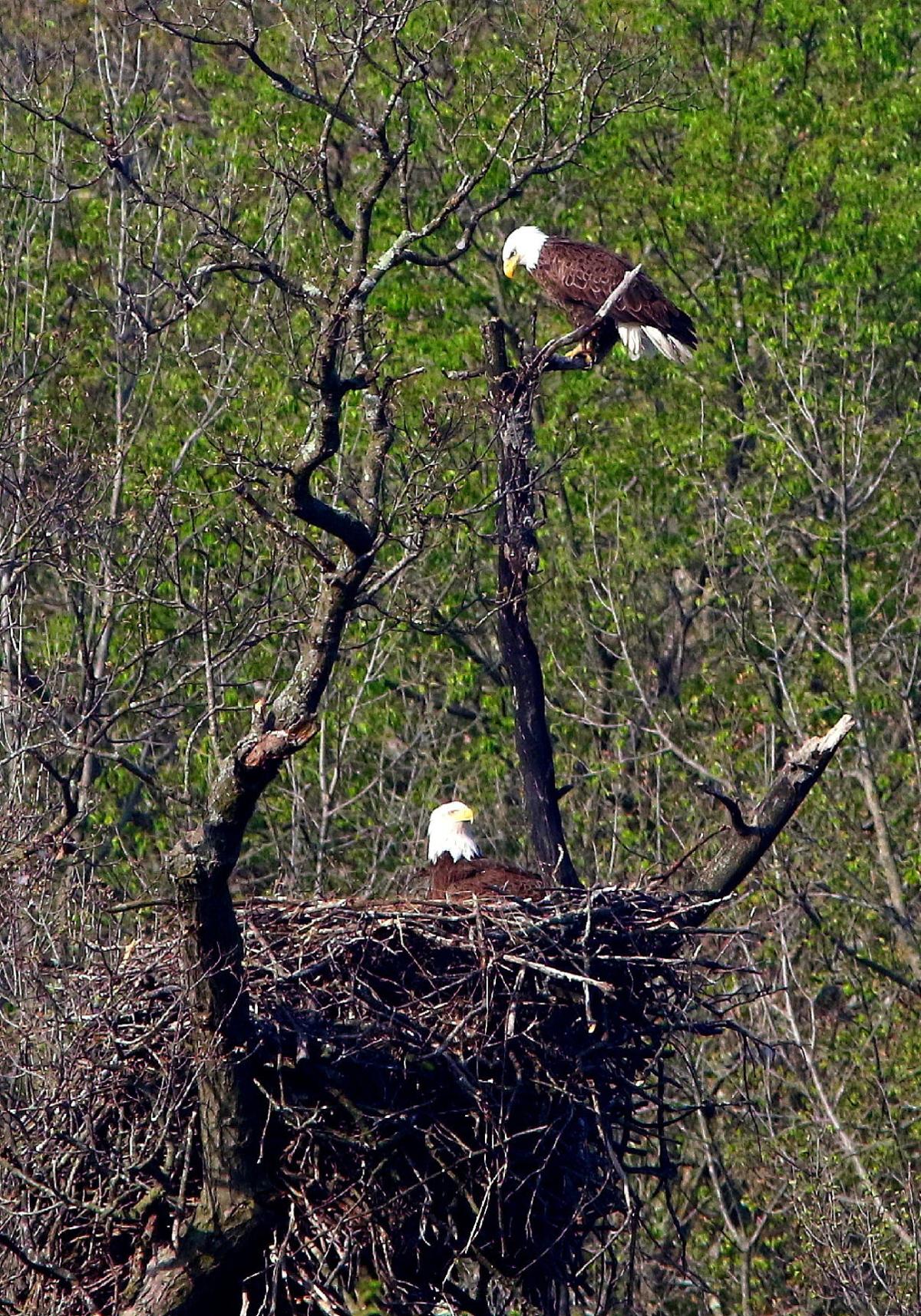 Bald eagle parents are both involved in carrying for eaglets. 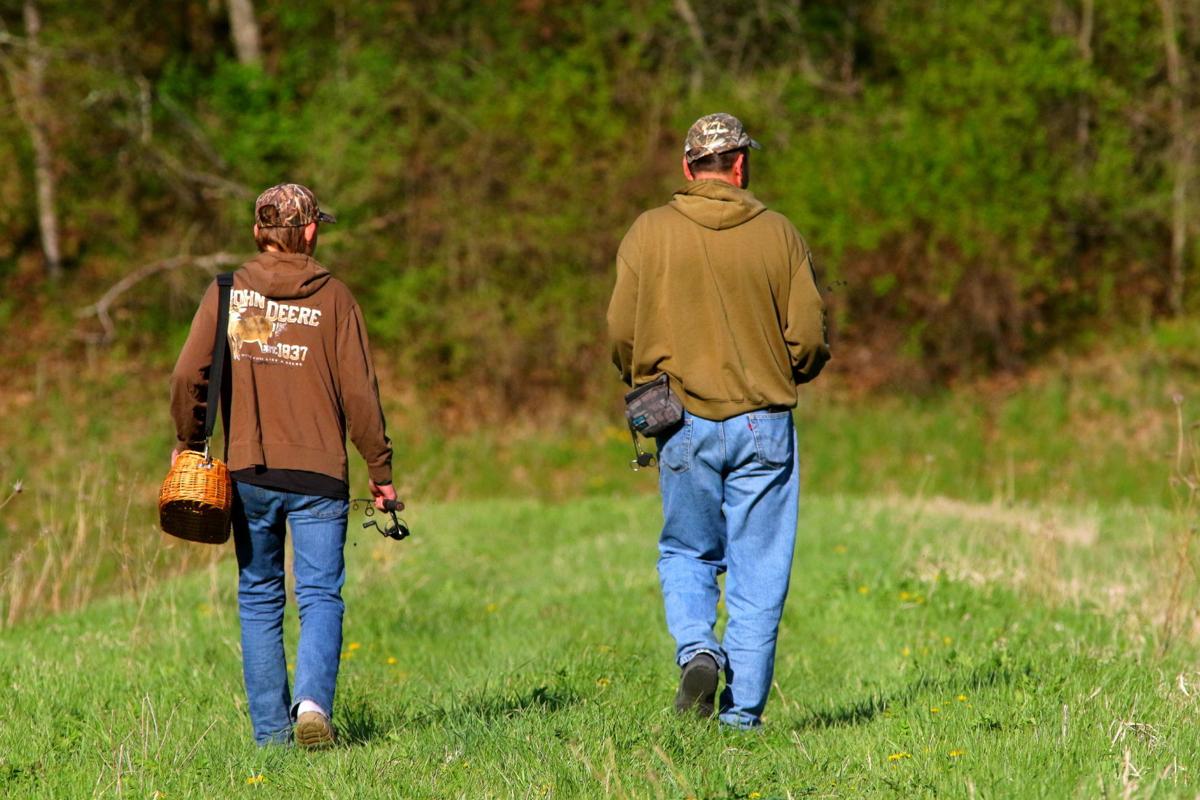 Trout fishing, and keeping, is now open on many Wisconsin streams. 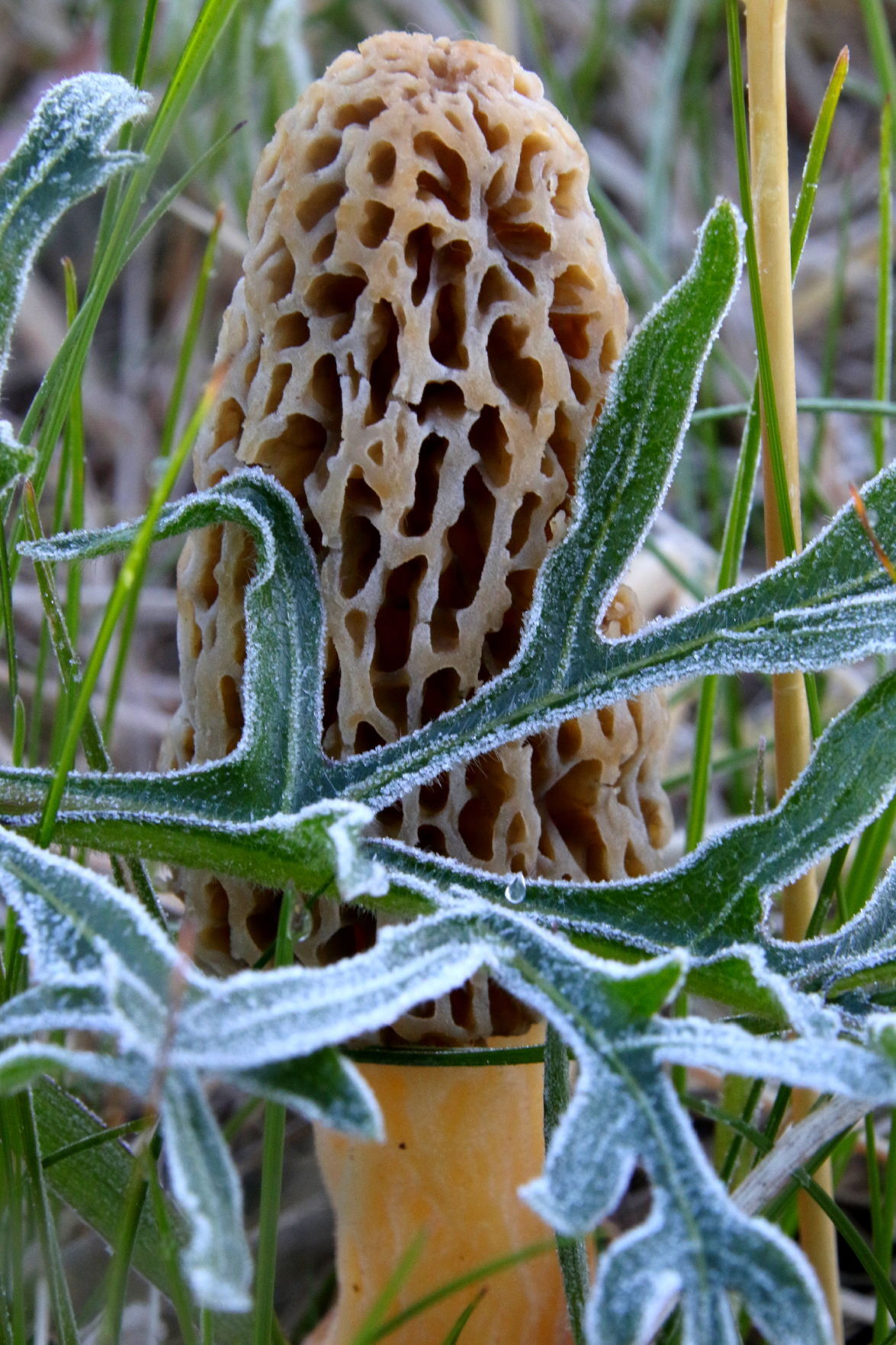 Morel mushroom populations are waning, while coping with frosty mornings. 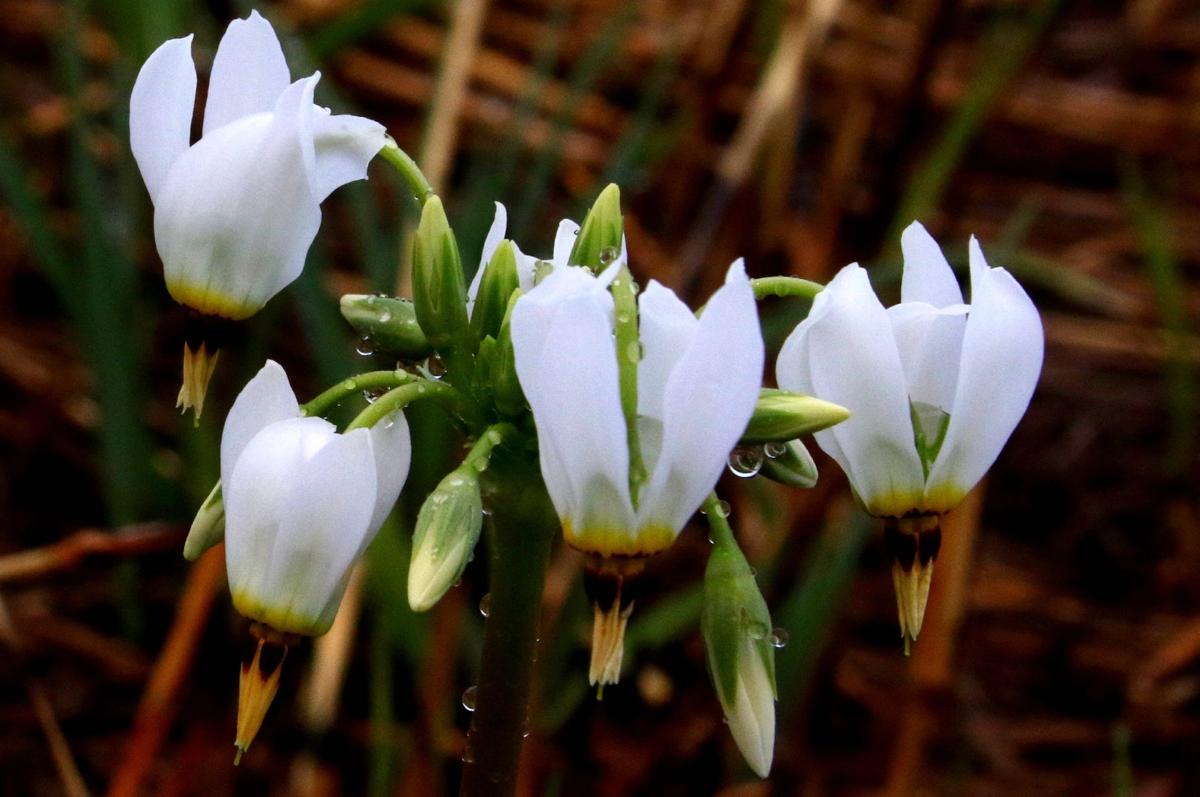 Most everything turns green in spring, but late frosts may necessitate re-growing or even replanting. Recruitment within populations, animals or plants, is not perfect, either.

Putting all measures of success on one event can lead to failure and discontent.

Morel mushroom gathering and wild turkey hunting have not been favorable to all participants this spring but adding another element or two to these treks may alleviate frustration or disappointment.

If morels fail to produce motherlodes, as was the case last year, too, take time to notice the orchids flowering, asparagus shooting, and turkey poults calling to mom when on a field or forest foray.

Fewer mature tom gobblers answering can be offset by noticing the start of deer antlers on a buck’s head, a male ruby-throated hummingbird doing its arc-positioned mating flight, or finding an ahead-of-schedule fawn.

“We may be an outlier,” said Doug Williams, at D W Sports Center in Portage. “The mushrooms are just starting and there is a good number of turkeys in some areas. Hunters should remember turkeys are going to be where the food is, not where we always hunt them.”

Williams says to watch when we have some normal, warmer weather, a few days in a row, and then hit the woods for morels and gardens or roadsides for asparagus.

So far, morel picking has been only a bit better than 2020, when hunters and buyers dubbed the season as the “worst year ever.”

Don’t give up on morels just yet, but reduce expectations. If they don’t get their start soon, they may not respond to favorable conditions arriving late.

There have been more than the usual difficulties seeing what few mushrooms there are.

One mushroom tried to emerge through a crack in spent elm tree bark. Another was wrapped as though inside an oak leaf tortellini. One picker described feeling them in tall grass because they could not be seen after a recent spurt of grass growth.

Still, the Muscoda Morel Festival is on again after skipping 2020. The village is split between Grant County (mostly), with a few residents claiming Iowa County as the village’s location.

There are a few other edible fungi species if identification confidence is sound. Sulphur fungi are likely to appear as early as Memorial Day and last until October.

Often-occurring bad luck accounts for turkeys walking or flying out of range.

Wayne Smith, in Lafayette County, had several things go wrong during period C. A bird came in behind him, he turned only to see another bird come in and chase the responding gobbler away. “Most times when something goes wrong, it’s usually in the turkey’s favor,” he chuckled.

Not all was bad news, though because more than 17,000 birds were taken during the first two periods.

Also, some hunters have reported hunts-of-lifetimes . Hunters have heard turkey chicks and hen turkeys making assembly sounds, even though the young are too small to see over the vegetation.

Numerous orchids are in bud stage or have opening flowers, including yellow lady’s slipper and showy orchis. Less showy but just as interesting are the blooming shooting-star and Jack-in-the-pulpit.

Wild asparagus is amassing stalks, albeit slowly. Roadside grass is overtopping the edible “grass” though.

Some small ponds in Green County near Monticello are producing great panfishing catching, Don Martain from Monroe said, and stinkbait is attracting nice catches of “cats” on the Mississippi and Wisconsin rivers according to John Borzick, as Tall Tails, in Boscobel.

Kelly Maguire, at the Poynette Game Farm, was excited to announce the facility is well on its way to raising 75,000 pheasants, up from 50,000 released last fall on public lands.

The day-old-chick program is on hold for a second year due to staffing and COVID-19 protocols, but will be back in 2022, she said.

Conifers are developing seed and pollen cones. The pines are producing “candles,” new stems with latent needles yet to shoot out.

Fox and gray squirrels have found an early “nut” to substitute for many forms of hard mast. The early soft maple fruits, each with one soft seed, are being fed upon for hours at a time. That’s what all the leaf litter under maples, and elms, is all about.

Martin reported, without explanation that a customer found 20 turkey carcasses in Green County.

When relying on a wild menu for a change in menu, involve some planning and scouting to confirm locations fit for an endeavor. Very few of nature’s items are spread evenly, which is certainly true of orchids, deer, turkeys, morels, asparagus, catfish and eagle nests.

Another great day for favorites in Major League Baseball

Another great day for favorites in Major League Baseball

The Baraboo Riptide youth swim team touched the wall first in a number of events in Saturday’s dual meet at the Mount Horeb Gators.

An abnormally hot, dry June sent many fruit types toward a road of no recovery, but recent rains may have saved some nuts, seeds, and garden a…

WALTERS COLUMN: Life on the bay

Two Canada geese goslings follow their mother, who must be hinting something with your swimming posture.

Bald eagle parents are both involved in carrying for eaglets.

Trout fishing, and keeping, is now open on many Wisconsin streams.

Morel mushroom populations are waning, while coping with frosty mornings.