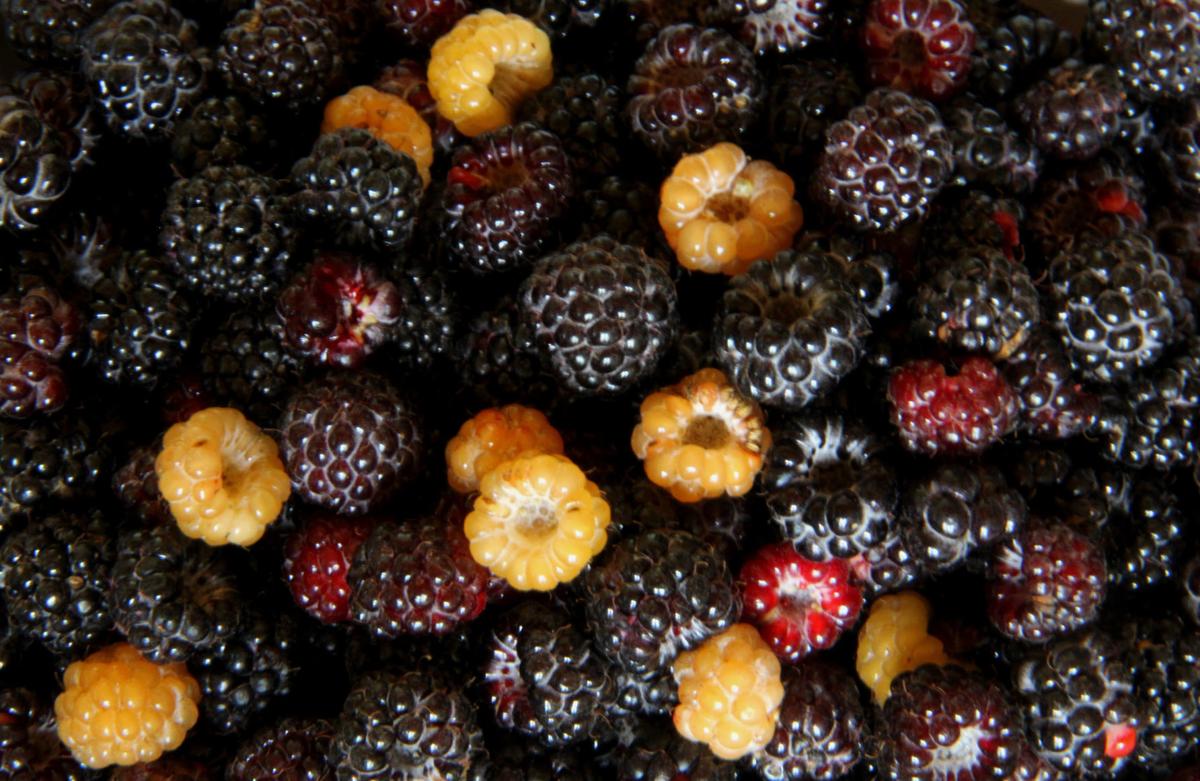 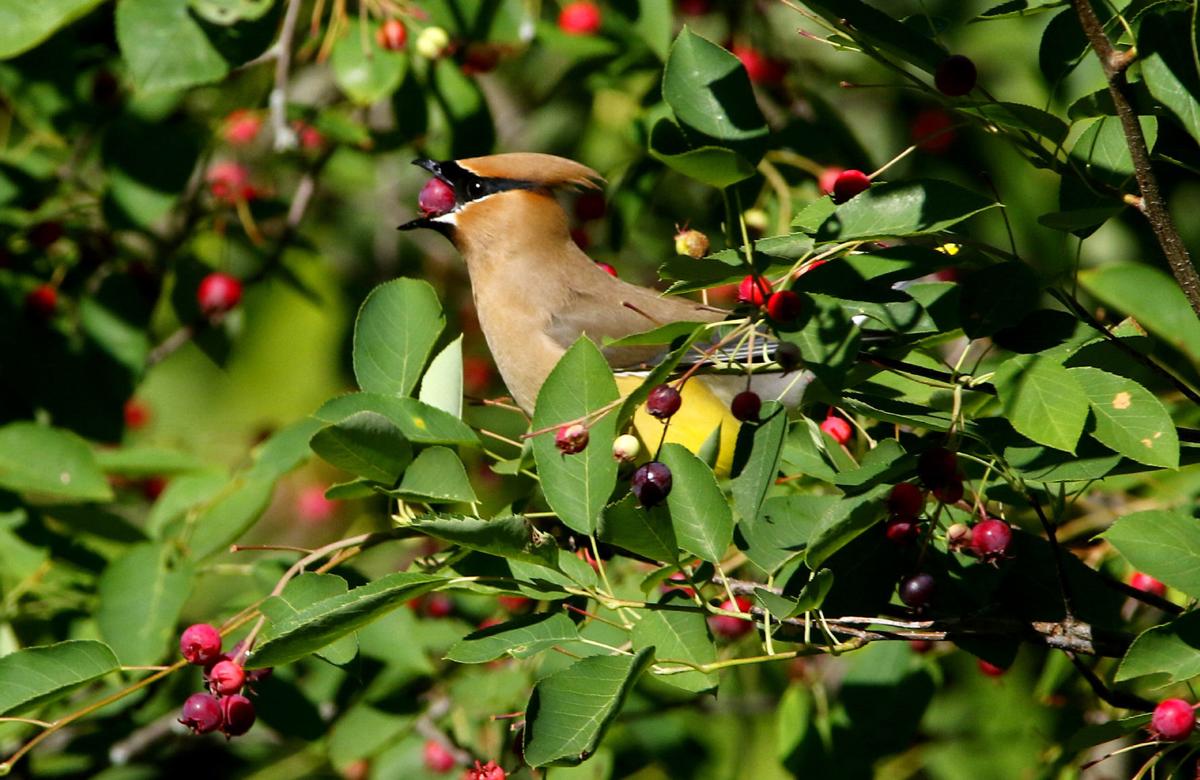 Cedar waxwings are one of more than a dozen birds attracted to small serviceberry trees; and raccoons, too. 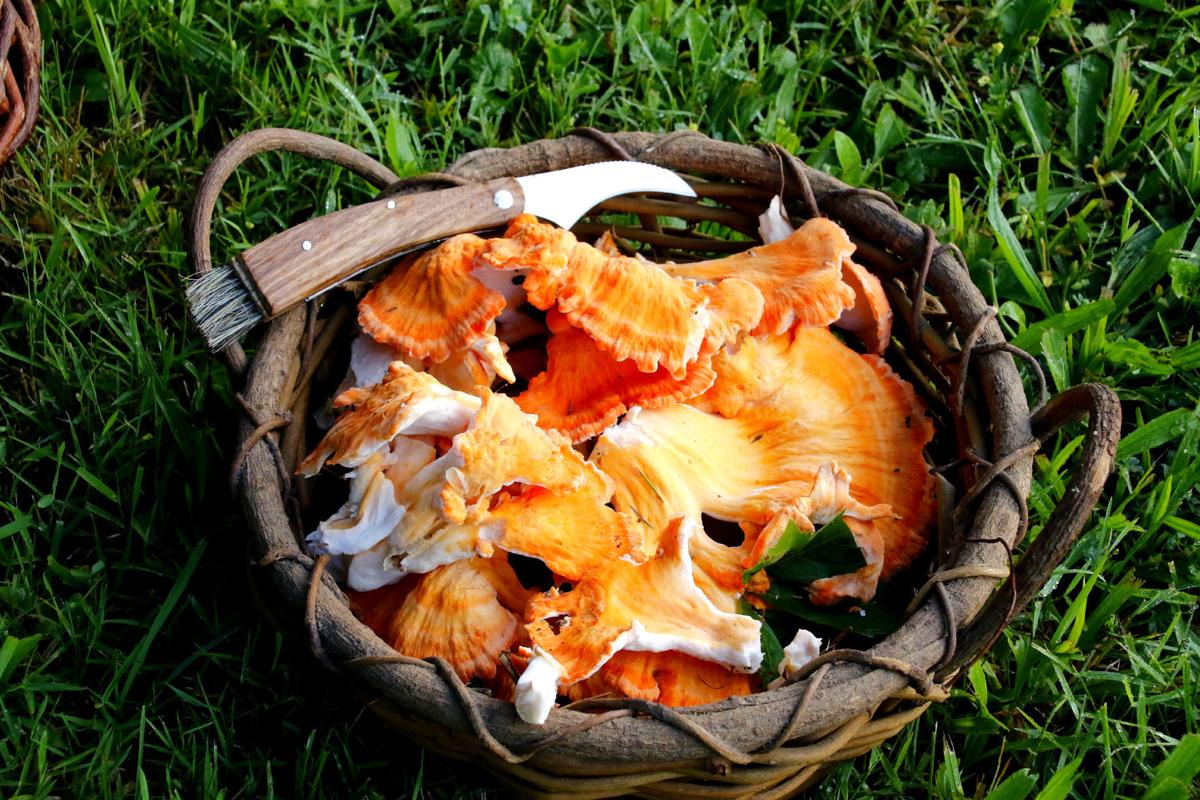 A paler variety of chicken-of-the-woods is now fruiting.

There are sure to be food supplies for other organisms involved, energy packets to get the new seeds started and methods to pay a transportation fee to move the seed to a better life.

Many fruits are brightly colored and noticed by birds and other animals, even eaten, with seeds often passing through a digestive system without being processed.

Wisconsin’s blackcaps are now commencing to be noticed, even by people, some of whom put a cabbash on all this propagation, only being interested in feeding their own needs. In most cases there are plenty to go around; a few for the birds to transport, some to drop directly and germinate in place, and others for bears and people to eat.

Wild raspberries are in season and in many cases free for the picking; no license and little equipment are required. Not all flowers and the following fruits mature at the same time on this plant. The center flower matures first and edge flowers follow. Picking early may give a person one ripe fruit per branch; later 3-4 fruit may mature synonymously, putting more fruit is a basket.

Black raspberries have many purposes, including pies, fresh fruit, jelly, wine and more.

Mulberries, a tree fruit, are similar and earlier than raspberries. Record their presence on roads where they fall.

Juneberries, known as serviceberries, are tiny apple-like fruits. While delicious, most Juneberry trees are discovered by raccoons and birds, leaving few for us.

Raccoons and bears are doing considerable damage to serviceberry trees this month, snapping most small-to-large branches.

One of the early “fruiting” fungus is being sparingly discovered. The Cincinnatus species is paler than the later sulphur shelf chicken-of-the-woods, but equally tasty, most mycophagus gourmets assert.

Collect this fruiting body young and fresh for best appeal.

Wolves have been involved in Forest, Bayfield and Sawyer counties where they depredated a beef cow, calves and sheep.

Frequent rains have set stream fishing back a step in some areas, however, anglers to our immediate south have continued to find Wisconsin trout streams to their liking with hauls of a dozen or more fish being common, but with almost all being released.

Garden crops give hints to what’s ready in the wild, or the reverse. Red raspberries are producing, and the birds are telling us that, leading to netting covers to save the harvest.

Deer continue to feed on tender corn shoots, new alfalfa growth, and oat that is heading out. Our corn eating is scheduled to begin about July 15.

Pollinator plantings are bringing blooms, including yellow, as well as purple, coneflowers. Compass plants are beginning to show yellow bud blooms. Along with these come many butterfly species, including the red-spotted purple butterfly, who is lazy and lethargic on wet mornings.

The appearance of Japanese beetles is coinciding with bean blossoms. Watch for red-headed woodpeckers to pick off more than their share of these insects. Hand picking can be beneficial to the infected pole beans.

The best time to see, and hear ruby-throated humming birds is at first light; sometimes they’re heard before being seen, even on rainy mornings.

Berry seasons mark a first big gathering session. Take advantage, even if it’s just getting a handful to top a cereal bowl.

Cedar waxwings are one of more than a dozen birds attracted to small serviceberry trees; and raccoons, too.

A paler variety of chicken-of-the-woods is now fruiting.