WALTERS COLUMN: Christmas break on the big river
comments
Share this
{{featured_button_text}}
1 of 2 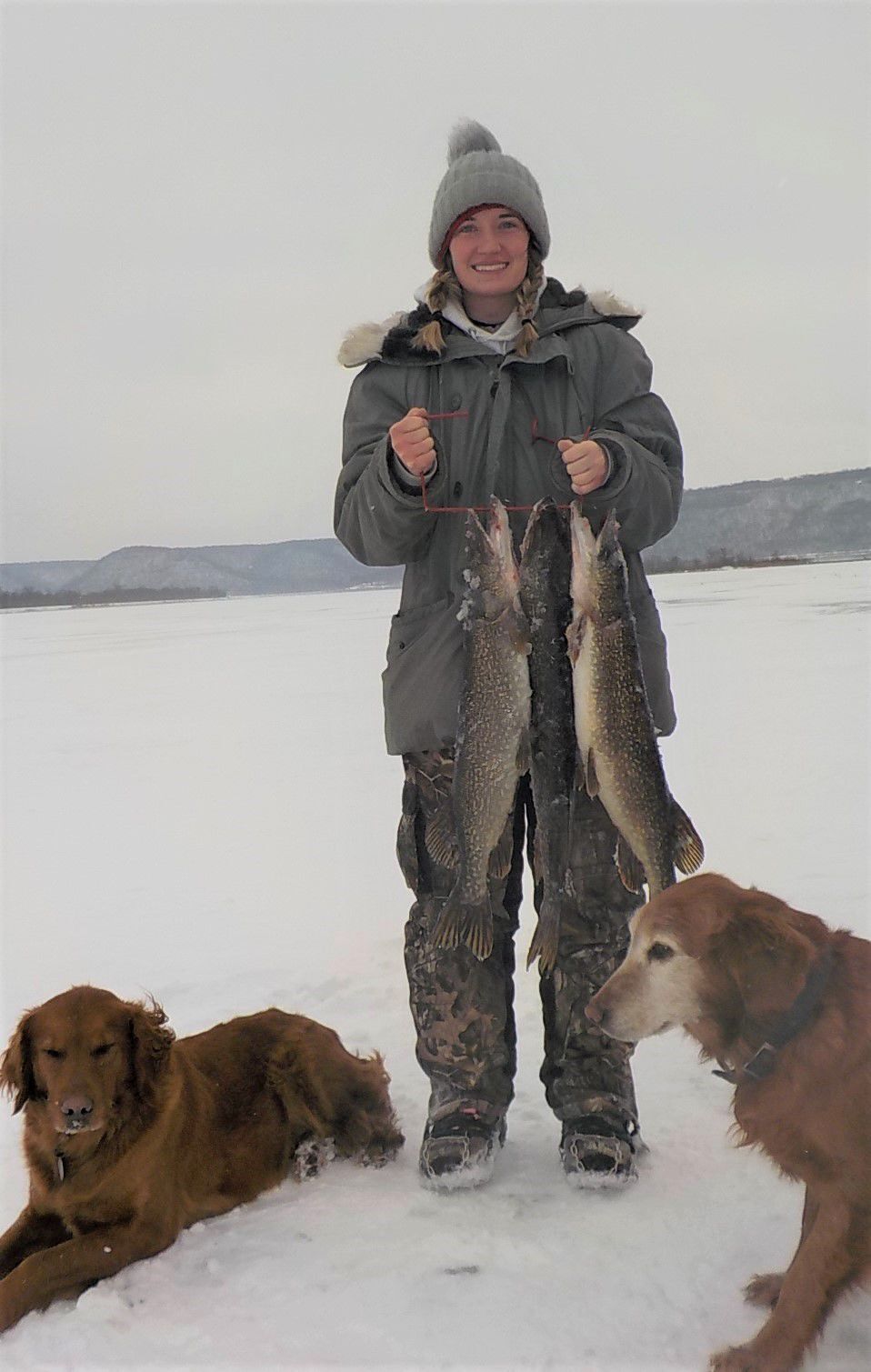 My daughter, Selina, with a nice catch of northern pike. 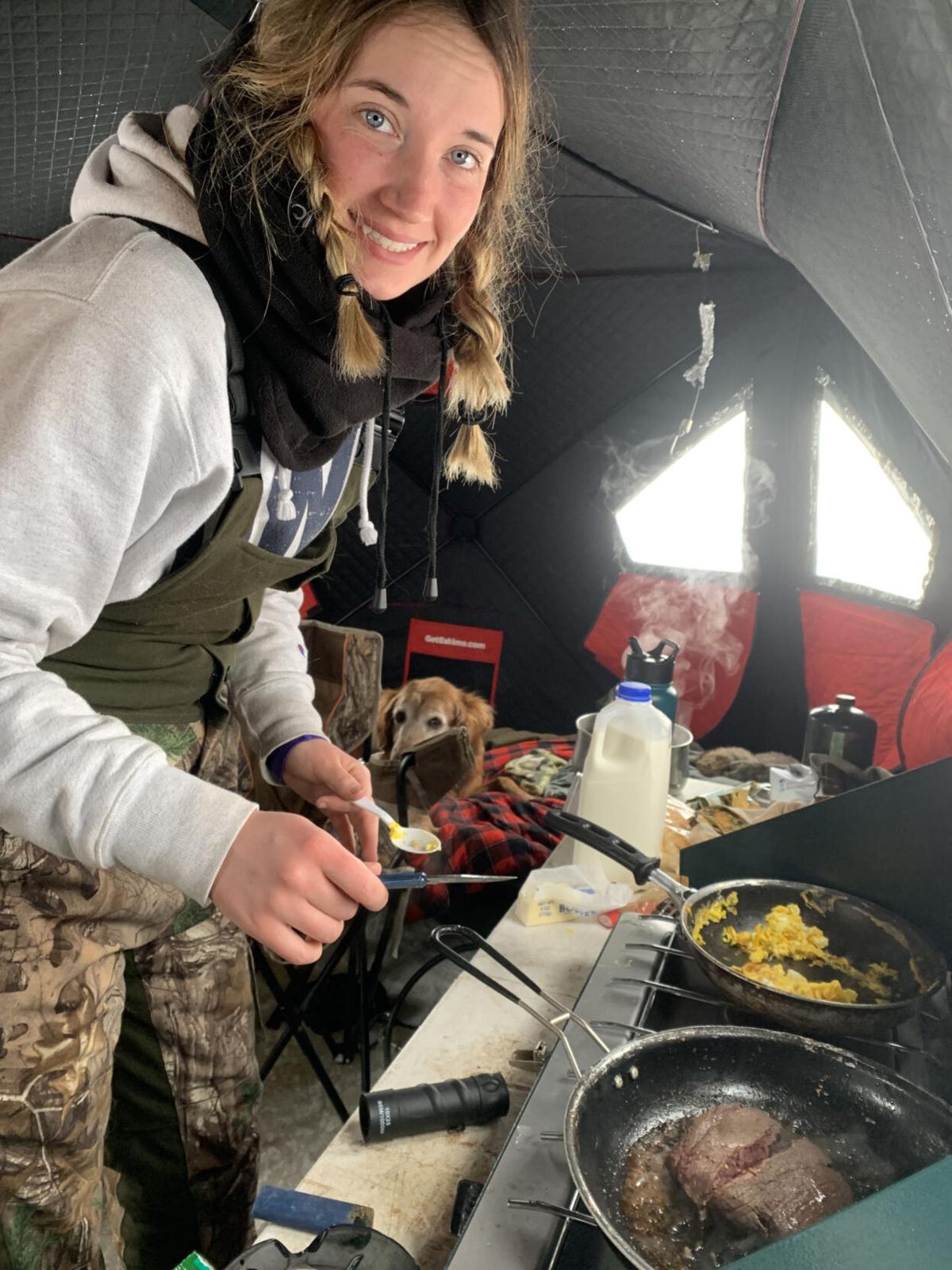 My daughter, Selina, cooking up breakfast in the ice shack, featuring eggs and deer steaks.

This week I am writing about a winter camping and ice fishing trip that I went on with my 19-year-old daughter, Selina. We headed over to Buffalo City, which is about 35 miles north of La Crosse on the Mississippi River, and hiked in a short way pulling Otter sleds loaded with gear to our destination.

Selina has just finished her first semester of her sophomore year studying fisheries and aquatic sciences at UW-Stevens Point, and it is very cool to see that she is still into winter camping and ice fishing, especially since our golden retrievers, Fire and Ruby, were with us.

When we hit the ice, there were five fishermen that were all jigging for panfish and not catching much at all. My plan was to put out two tip ups apiece for northern pike, and one tip down each with a crappie minnow on it for panfish.

We had a few round trips and a lot of camp to build with about two hours of daylight left. Our living quarters would be my 12x8 Eskimo “Fatshack” and it literally is a cabin on the ice. The Fatshack pops up like a turkey blind, is insulated and after we run two propane lights, set up a table, a cookstove and two cots. Life is perfect.

We had zero action but still had nearly 48 hours left on the ice and were confident our luck would change.

Jigging for panfish as well as the tip downs was only yielding small perch, so we made the executive decision to go with all tip ups and try to catch a big gator, or at least a few medium sized gator/northern pike. I always find it amusing when people tell me that they will not mess with northern pike because they are too slimy, or actually the real reason, being too bony. By the time I was 12, I knew how to Y bone this fine eating fish and it truly is one of the best eating fish that Wisconsin has to offer, in my opinion.

This morning Selina iced our first fish, which was a 29-inch pike, and that put a big smile on our faces.

I have been winter camping every year with Selina since she was 2 and time sure has changed our situation. It used to be that she was part of the gear that I pulled onto the ice, I set up camp by myself and did all the cooking.

These days she can pull as much gear as I can, knows how to set up camp and this morning cooked steaks from the buck she killed in November, along with eggs that we harvested from our chickens.

What I really find to be very positive about our relationship is that no matter how slow our hunting or fishing experience may be, we never run out of things to talk about and literally every moment is positive.

In closing on that subject, Selina loves the pups and they constantly amuse each other. Ruby always wants to play fetch and her mother likes to sleep, be petted, and observe.

The forecasters were predicting a big snowstorm for today and we found that exciting, but in reality, it was mostly wind and plenty of it along with maybe two inches of snow. All night long the ratchet straps and ice anchors were tested by a constant 20-mile per hour wind. They held and our camp did not blow away.

The description for today’s conditions on the ice would be brutal; constant wind and blowing snow. Yesterday I kept moving tip ups and looking for a honey hole and this morning that paid off. We had one area that was about a 100-yard walk that kept having a flag go up, and over the course of the day Selina caught a limit of beautiful gators. Our good friend Jeff Moll gave Selina a freezer, and with her buck, fish, and a lot of homegrown food, we will work together to minimalize the grocery store as much as is realistic.

As far as this trip, it was blast and hopefully they won’t end until I am dust in the wind!

Take a hike is not always an insult; it can also be said suggesting getting outside, clearing minds and exercising bodies.

My daughter, Selina, with a nice catch of northern pike.

My daughter, Selina, cooking up breakfast in the ice shack, featuring eggs and deer steaks.