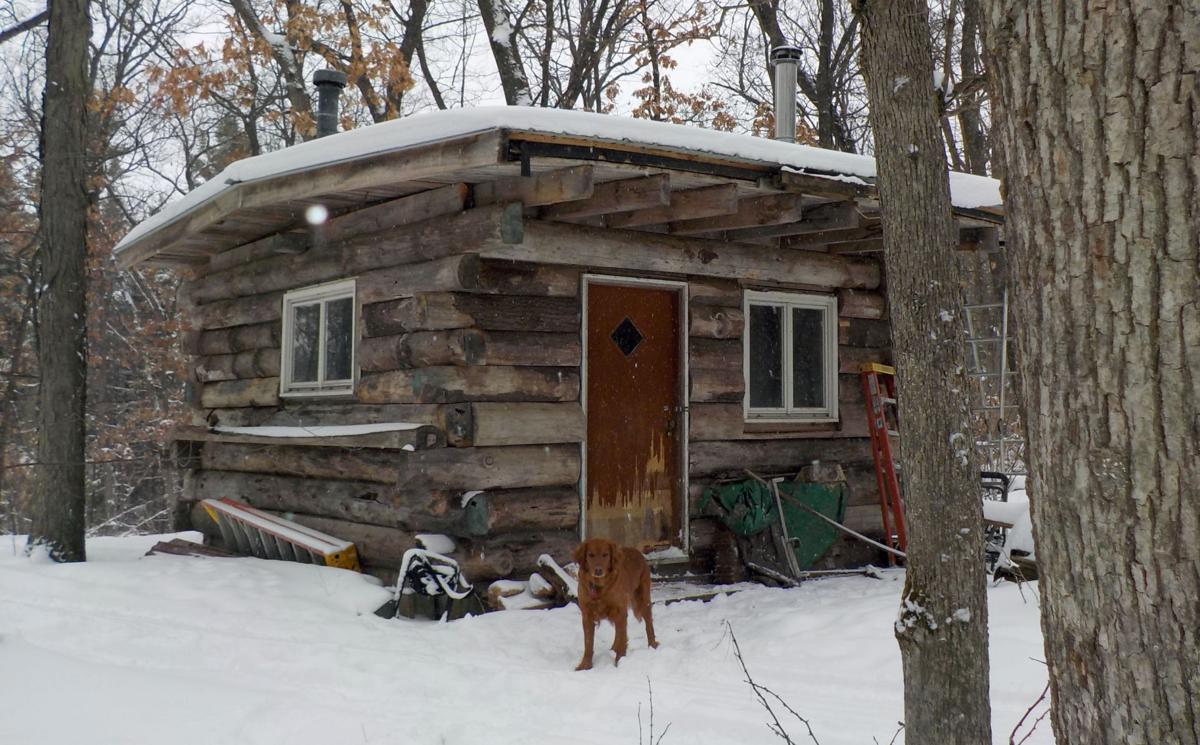 Ken Schuster built this cabin on his property, the same property I hunted with my dad before his passing in 1994. 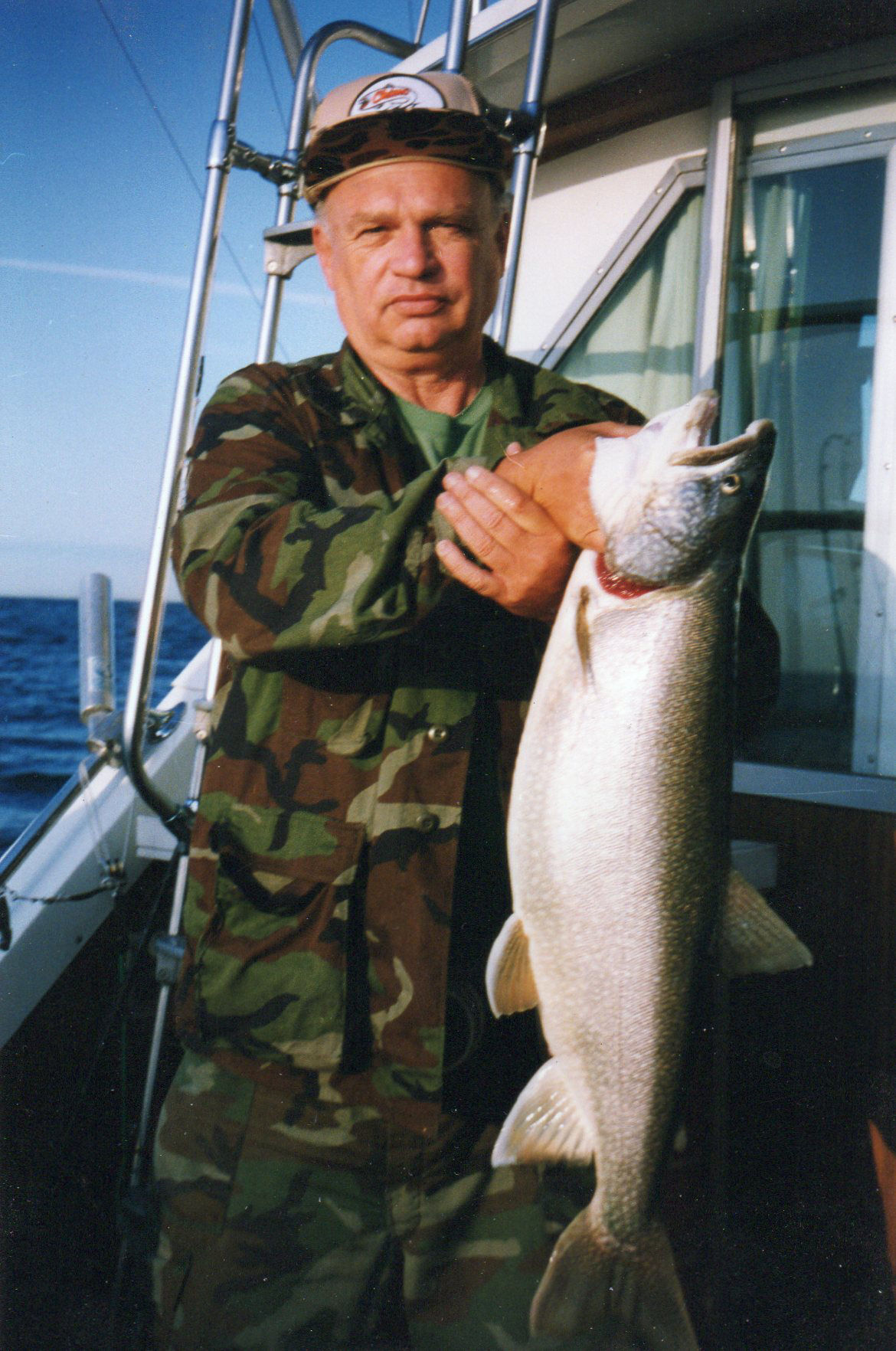 Robert Walters, my father, loved to fish salmon and trout on Lake Michigan.

Early this fall I decided that I was going to do a squirrel hunting story. I have been writing this column for almost 32 years, and although I was an avid squirrel hunter as a kid growing up in Columbia County, I have not hunted squirrel since the 70s.

As you are about to find out, squirrel hunting was the goal, but not a big part of this story.

My plan was to backpack and camp somewhere in Wisconsin where there are squirrel, and I would use my Remington model 597 .22 as my firearm. Just before I left home with my official squirrel dog Ruby, I added my dying rabbit coyote calls to my arsenal.

Where I would hunt is the real story. That was kind of a last-minute choice and it would be a 160-acre piece of pure paradise in Iowa County near Mazomanie that is owned and lived on by Ken and Moni Schuster. I am kind of related to them by my brother-in-law, Dick Schuster.

The Schuster’s land could be described as two ridge lines with a valley in between, with mature hardwood trees that is loaded with deer and can be pretty physical to walk.

Three days before I started this adventure is when I talked to Ken and told him of my plan to camp. Ken told me that he had built a 16 x 16 log cabin on the back part of the property that had a wood stove and that I could stay in that.

So here is the inside story. My dad, the late Robert Walters, passed away on April 30, 1994. I was very close with my dad from the day I was born until the day he died.

One of my dad’s favorite sports, back in the late 80s and early 90s, was turkey hunting, and he did it at Ken and Moni’s in Iowa County.

So today I had a good talk with Ken and Moni before beginning the trek to the cabin with my backpack, .22 and Ruby in about 12 inches of snow, with another 6 predicted.

The cabin was everything I hoped for; I felt like I fell back to 1970 in northern Wisconsin. One bed, the logs came from this forest, a woodstove for heat, and a cookstove that required wood. Ken stays here a few nights a year when bowhunting and during rifle season.

The hunt began soon after and my plan was to travel on foot about 400 yards at a time, sit, relax, watch for squirrels and after ten minutes, blow into my coyote call. Ruby would lay perfectly still, and our job was to observe.

Over the course of the afternoon, I saw one squirrel and it was on the neighbor’s land. I hunted the entire property, and it was a very cool experience.

Six more inches of snow fell last night and this morning, and I really enjoyed that as winter is my favorite season. I saw 17 deer but not a single squirrel, and at dark the season closed until next September.

Here is the rest of the story. I was a writer in April of ‘94, just like now. I camped on Ken and Moni’s with dad and he hunted; I did not have a tag but sat with him. My dad was a captain in the Marines and could walk in any terrain without losing his breath.

I noticed on that hunt that he was a bit winded. When the adventure was over, I returned to my home in Glidden and Dad went to what is still our family home in Poynette. Our next trip was supposed to be just 12 days later, salmon fishing on Lake Michigan.

I had set up a charter the year before and we kicked ass. We were excited for that year’s adventure. On the Thursday night of April 29, I spoke with my dad for over an hour on the phone and kept thinking this bill is going to kill me as it was with a landline and I was what you might call on the low income end of life.

The following night, at the age of 60, my dad passed away in bed due to a heart attack. To this day that is the worst thing that has ever happened in my life.

This trip was the first time I was able to come back to Ken and Moni’s and it was good for me.

The day after dad’s funeral, Dick Schuster, Mike Walters, Tom Walters and Bob Walters — “my brothers” — and myself did the charter.

For those of you that are not aware of this, hunting is way more than filling a tag!

WALTERS COLUMN: End of the 'Easy Season' on the Wisconsin River

Wisconsin’s state tree, sugar maple, gets as much play this month as during the crack of a bat, or the dribble of a basketball.

Ken Schuster built this cabin on his property, the same property I hunted with my dad before his passing in 1994.

Robert Walters, my father, loved to fish salmon and trout on Lake Michigan.