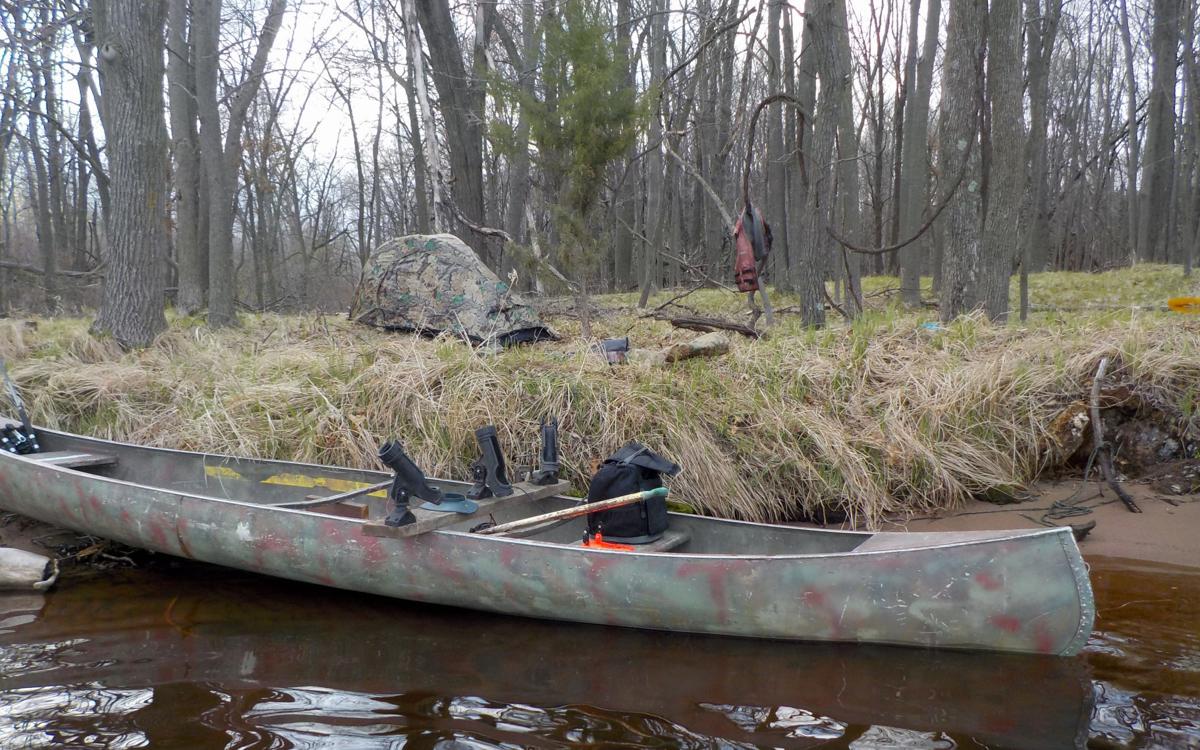 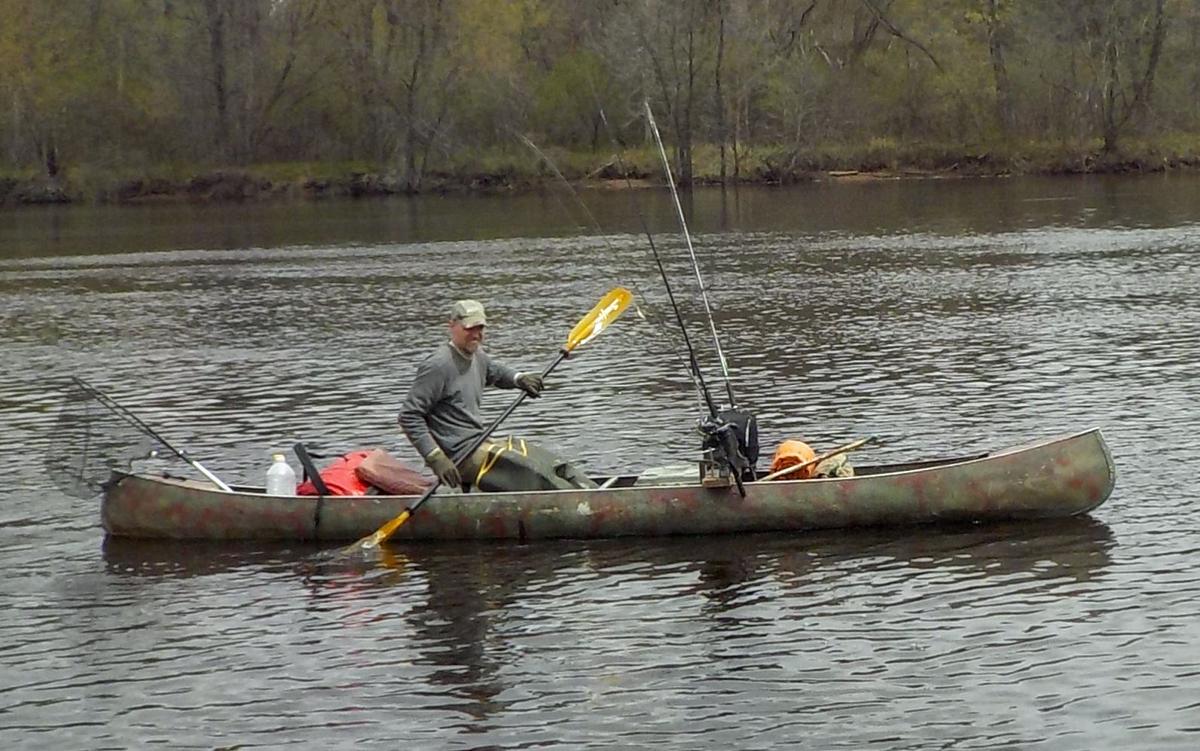 Walters canoeing down the Wisconsin River. 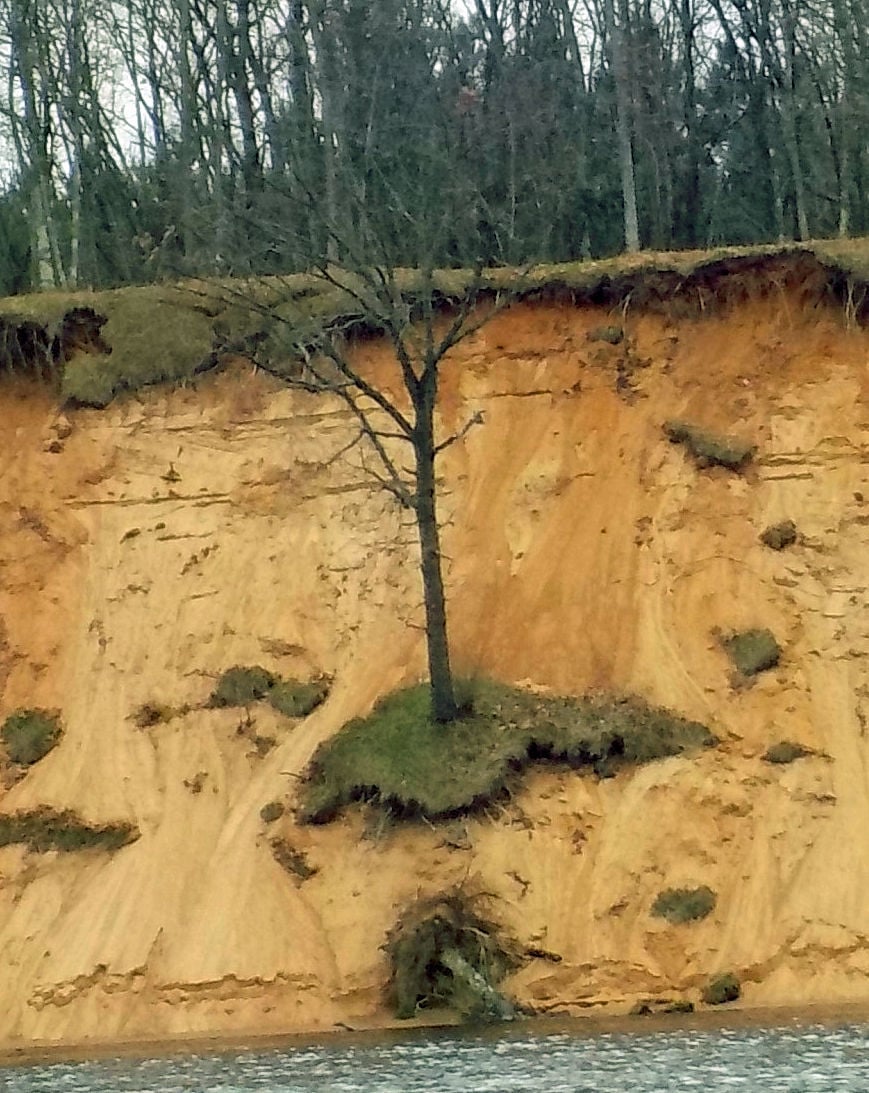 An ever changing Wisconsin River cost this tree it's life.

The last time that I canoed on the stretch of the Wisconsin River that I am about to write about was back in 1991. That was a big year in my life as I spent the winter camping and training to hike the Appalachian Trail with my golden retriever, Ben, in the Meadow Valley Wildlife Area. With Ben carrying 12 pounds and myself a whole bunch more, we hiked 1,244 miles of the AT. When I got home, I purchased “Star,” who was 6-weeks old and would be Ben’s future mate.

The three of us jumped in a canoe and I paddled down the Wisconsin River, and when I got home in the early fall, I returned to Meadow Valley.

Once again, the north is immersed in a long, cold spell. I knew that would have an effect on the fish catching as I rigged three poles at the boat landing at Nekoosa in preparation for a journey that would be roughly seven miles on the Wisconsin River and then 17 on the Petenwell Flowage.

I would be paddle trolling and would use three crankbaits which had a Hot ‘n Tot, Flicker Shad, and a blue chrome Husky Jerk J-12. To keep them away from my rig I would use left and right planer boards.

My first thoughts as I began paddling were this: would be a very nice place to live, and you do not have to go far down river and there are no houses; just what appears to be very remote lowlands and highlands. It did not take long, and something hit the Hot ‘n Tot and it turned out to be what walleye fishermen call a “short” — a walleye under 15-inches.

As I paddled, I kept thinking “I wonder if the land on the south shore is public? And if it is, there sure would be some good deer and waterfowl hunting.”

Best of all, I drank a beer and watched nature while doing as little as possible.

High 41, low 26 I woke up early this morning and watched ducks and geese from my camp and listened to a tom turkey that was gobbling and getting closer. Today was opening day of Wisconsin’s first turkey season and the tom got me pretty excited for my hunt, which is only a week away.

My paddling day would be one of intense weather; snow squalls and snags while pulling three lines. Here is a brief description.

I am pulling three lines, the wind is out of the west and not a problem. A snow squall hits, and the wind is out of the north and hitting me from the side. I am taking on water and cannot see the shore which is always at least a mile away. During one of these events, I literally figured I was about to meet my Waterloo!

The waves were so large and paddling so difficult that I figured I was going down like the Titanic. Several times — at least 10 — one of my rigs got snagged and I just wanted to take a knife and cut it, but instead I would kind of back up while reeling in my two other lines, and either end up breaking my line or getting it free.

This all may seem not much fun to the average person, but for me it is all part of the challenge of getting from point A to point B.

Fourteen-thousand years ago, this body of water covered 1,800 square miles and was 150-feet deep in places, which if you look at rock formations like Petenwell Rock by Hwy 21, that was actually the top of an island.

Today, my two biggest challenges were catching a fish and making it home. As far as catching a fish goes, all I reeled in was one short. I literally saw at least 50 wind direction changes over the course of one very long day and the entire day on the flowage I only saw three boats on the water.

Thirty years after my first trip on this stretch of water, I am still earning a living as an outdoor writer and I am still addicted to life in a canoe.

Straining to see across a field into a forest at 5:45 a.m. was a little like looking for horizontal lines of deer backs during November’s gun …

Walters canoeing down the Wisconsin River.

An ever changing Wisconsin River cost this tree it's life.