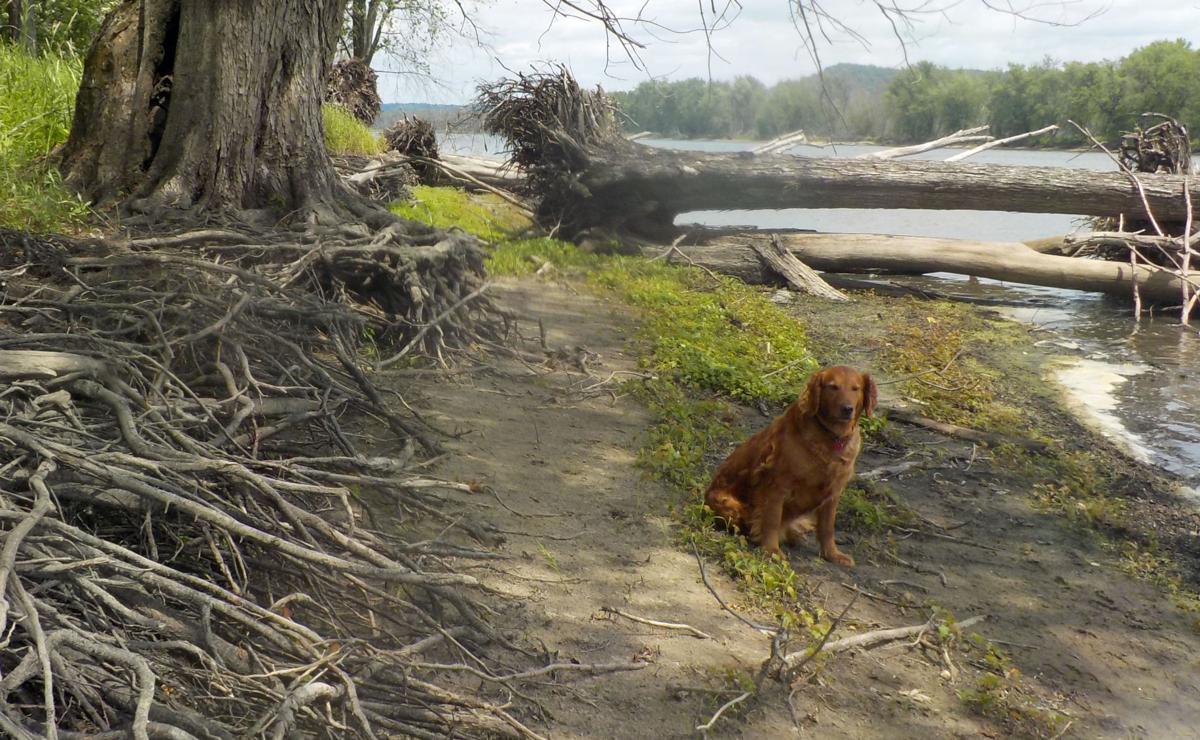 High water over an extended period of time can be devastating to the trees on a river system. 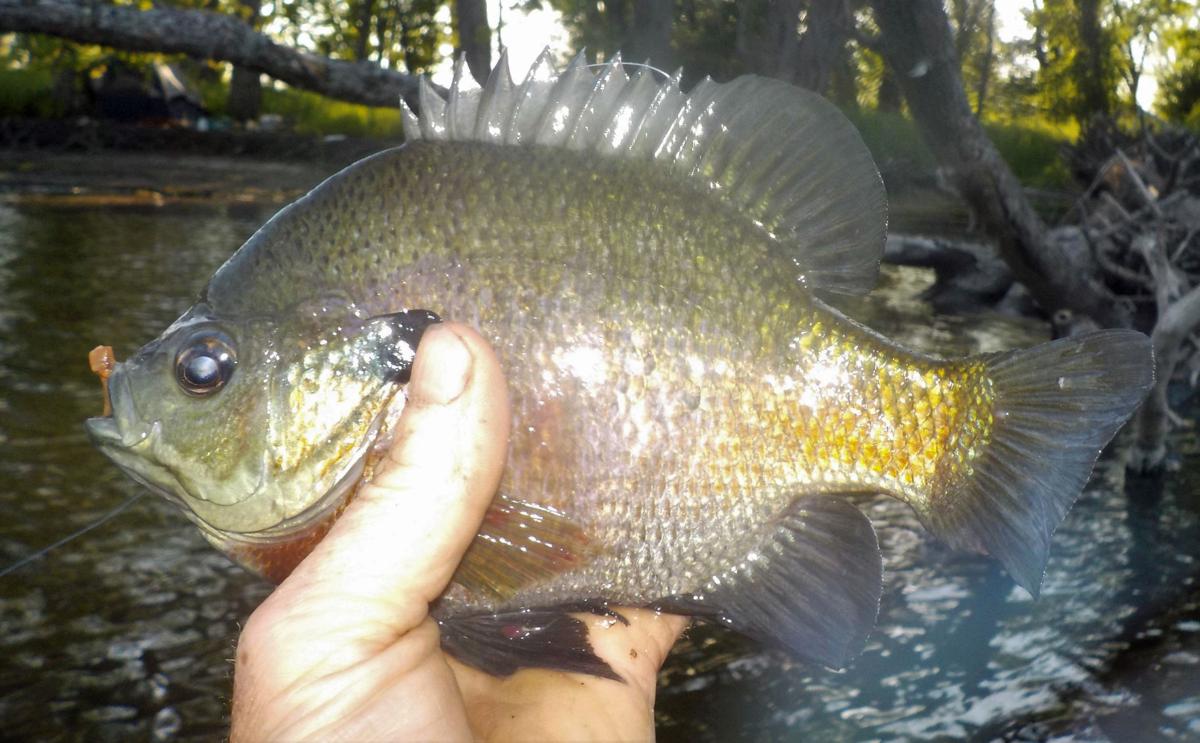 This gill was fun to catch. 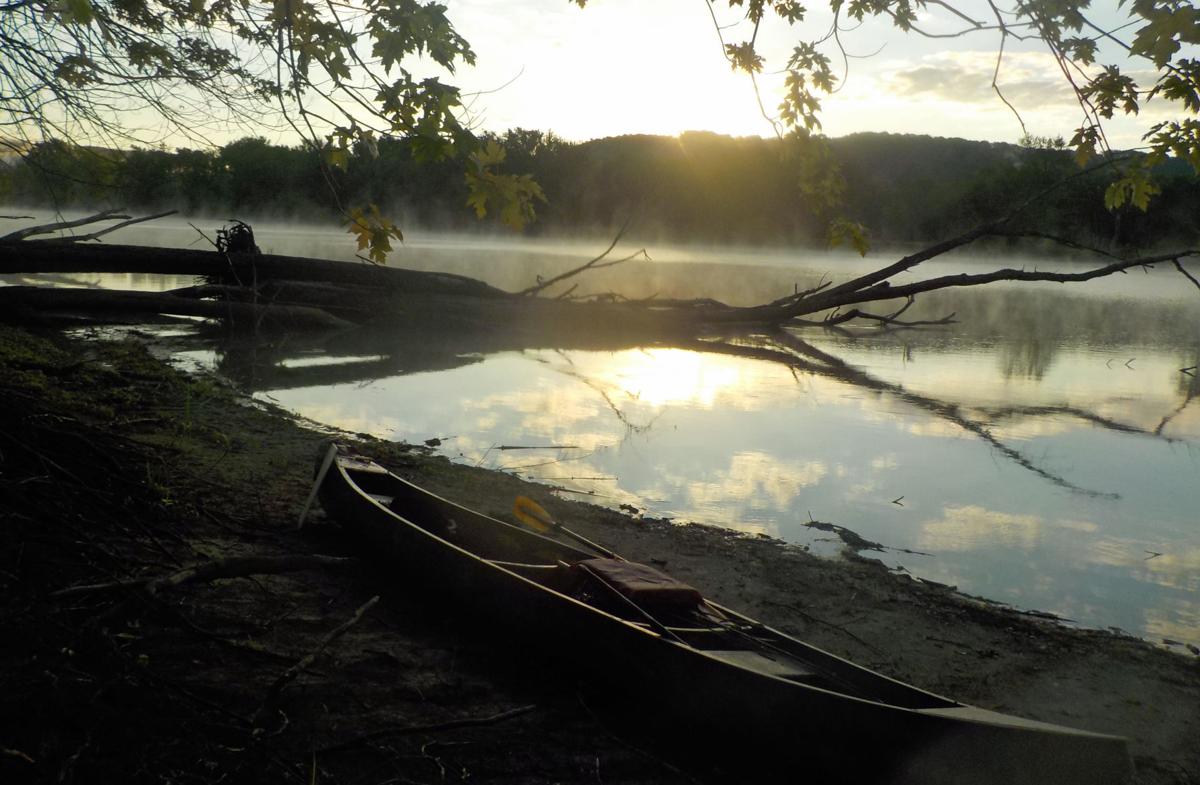 Sunrise on the Mississippi River.

I have had a ton on my mind and schedule lately, as well as a nagging injury, so I came up with the idea of bringing my golden retriever Ruby to an island on the Mississippi River via my 16-foot canoe and doing a whole bunch of nothing for three days.

Black Hawk Park is managed by the U.S. Army Corp of Engineers and is south of Genoa on the Mississippi about five miles. Back in the 80s I used to camp here and was a backwater fishing machine a good eight weekends a year.

Today it would be myself and Ruby, and I had no idea where I was going to paddle to other than to just get away. Other than camping gear I also had fishing equipment for panfish as well as paddle trolling for walleye and northern pike.

I hit the main channel and then touched into some backwaters, and just like that my trip changed. I found a downed cottonwood tree that was in the river and had several other trees with it. High water from around 2018 to 2020 had flooded most of the islands and killed literally thousands of trees, if not hundreds of thousands, for at least 200 miles.

The loss of the trees will be very bad for the islands as they literally are the glue that holds them together. On the other hand, deadfalls in the river that are in deep enough water are fish magnets.

So, it’s 3:00, I decide to paddle right into the deadfall, tie off my canoe and try vertical jigging with light jigs, and just like, that I catch a 9-inch gill. All common sense left my brain, I had not even thought of building camp or unloading. I fished until just before dark and had a dozen dandies when I started building camp.

So I forgot my stringer again and last night put my entire catch in my net in a tree limb that allowed my fish to be in the water. The tracks in the sand told the story; a small, probably female bobcat had flipped the net and my fish were gone.

I paddled to the snag and fished hard for seven hours, working several snags actually, and only kept 4 gills and a perch.

Let me tell you about my dog Ruby. She has been bred for just over three weeks and is growing quite rapidly. Ruby spends her day at camp and watches me as most of my fishing is 30 yards away. Ruby is rapidly becoming one of the best goldens that I have ever had, and I got my first one in ‘81.

So, this afternoon I tried a different spot on the snag; it can be pure insanity in a good way. All fishing is done by dropping my jig straight down and jigging. At least 20 times on this three-day adventure I hooked into very large fish that simply cut my line or wrapped it onto a branch and broke it.

Tonight at around 7:00, the fish bite turned on and it was incredible. I would catch two big gills and then have a big, toothy critter cut my line. Then I would catch an 11-inch crappie. I was simply having a blast.

Well before dark I paddled to shore, started a campfire, and filleted fish. While filleting, the ugliest raccoon that I have ever seen strolls into camp and Ruby wants to fight. I had her stay and let me tell you, this coon wanted to scrap as well.

At 11:00 I was about to hit the sack/sand and the coon came back. I did my best to make it feel unwelcome and slept like a baby.

The next morning, I reeled in one of the nicest catches of bluegill and crappie that I have ever caught out of a canoe, broke camp and headed home.

My plan of laying around and resting did not materialize but I had a great time and actually did not even want to go home.

Annual trip yields no fish, but loads of fun and tons of laughs.

High water over an extended period of time can be devastating to the trees on a river system.

This gill was fun to catch.

Sunrise on the Mississippi River.