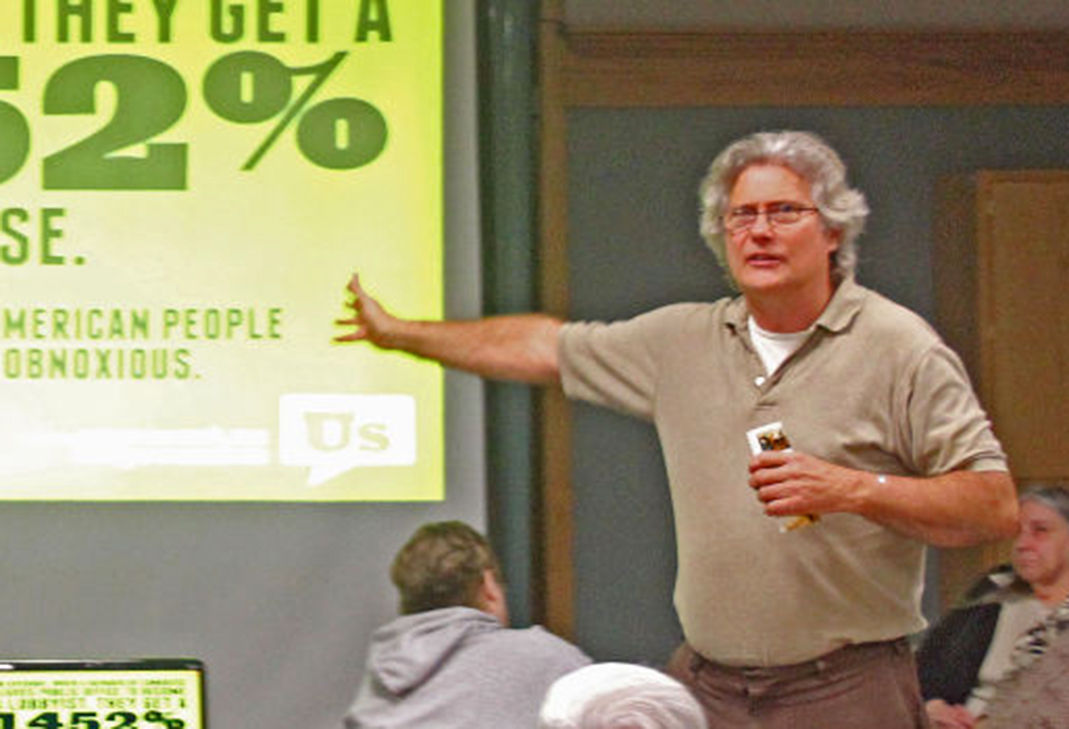 George Penn of Wisconsin United to Amend says the typical Washington lawmaker who leaves office to become a lobbyist makes $3 million the first year, a raise of 1,452 percent in a Nov. 3 presentation at the Reedsburg Public Library. 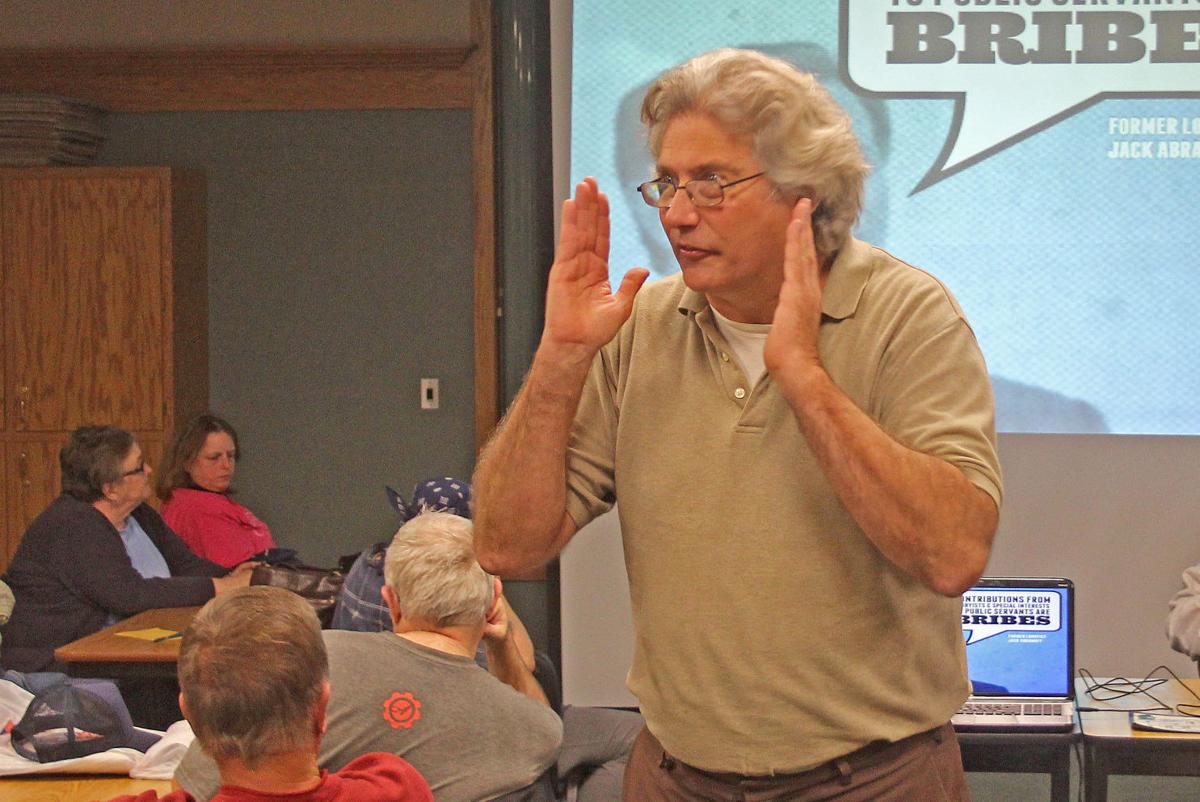 George Penn of Wisconsin United to Amend makes the case for a new amendment to the U.S. Constitution aimed at curtailing the influence of political spending in a Nov. 3 presentation at the Reedsburg Public Library.

A Reedsburg group plans to launch a petition drive allowing residents to weigh in on a proposed amendment the U.S. Constitution.

Members of Reedsburg Area Concerned Citizens want to give city voters a chance to join 61 other municipalities across Wisconsin in an advisory referendum backing creation of a 28th Amendment.

The amendment would declare that corporations are not due the same constitutional rights as people and restrictions on political spending do not infringe rights of free speech.

“We need to be sure that our votes count,” concerned citizens Chairperson Judy Brey said. “Otherwise, what makes us think we live in a democracy anymore?”

In a 45-minute presentation Nov. 3 at the Reedsburg Public Library, the man who’s spearheading outreach in Wisconsin for the proposed amendment told about two-dozen people that the nation’s future hinges on the change.

“We have to fix our democracy first before we can fix any of the problems, which are deepening every year,” said George Penn of the nonpartisan and nonprofit Wisconsin United to Amend.

In a case decided in 2010, the U.S. Supreme Court ruled communications by corporations, associations and unions are protected free speech and that attempts to limit political advertising by such groups are unconstitutional.

The 5-4 ruling of the high court is generally referred to as the Citizens United decision after the plaintiff in the case, a conservative political action committee.

The court decision left intact a precedent with origins in the 1880s that equates corporations with people.

Opponents claim the decision opened floodgates to massive campaign spending by corporations and wealthy individuals in the form of issue-advertising that is thinly disguised support for candidates.

“Lobbyists and wealthy donors use their campaign contributions as legal bribes,” Penn said. “It’s that simple.”

Penn pointed to data showing that spending on U.S. political campaigns skyrocketed after the Supreme Court decision and 85 percent of Americans, including many self-described conservatives as well as liberals, believe the decision will lead to corruption.

The typical Washington lawmaker who leaves office to become a lobbyist makes $3 million his or her first year, a raise of 1,452 percent, Penn said — one reason why it is pointless to try to get Congress to act.

“I’m not going to talk to a wall, I’m going to build a movement,” Penn said.

A similar ballot initiative won approval of voters in the town of Reedsburg earlier this year.

To get the proposal on ballots in the city of Reedsburg next November, proponents would need to obtain signatures equal to 15 percent of the number of people who voted in the last election for governor in 2014 – about 600 names.

Once a petition drive begins, state law stipulates the required number of signatures must be collected within 60 days.

Brey said it is possible her group will begin the petition drive around the time of the spring election next April.

Sandra L. Weeks, age 69 of Beaver Dam, passed away with her daughter June by her side on Friday, March 27, 2020, at Marshfield Medical Center—…

George Penn of Wisconsin United to Amend says the typical Washington lawmaker who leaves office to become a lobbyist makes $3 million the first year, a raise of 1,452 percent in a Nov. 3 presentation at the Reedsburg Public Library.

George Penn of Wisconsin United to Amend makes the case for a new amendment to the U.S. Constitution aimed at curtailing the influence of political spending in a Nov. 3 presentation at the Reedsburg Public Library.