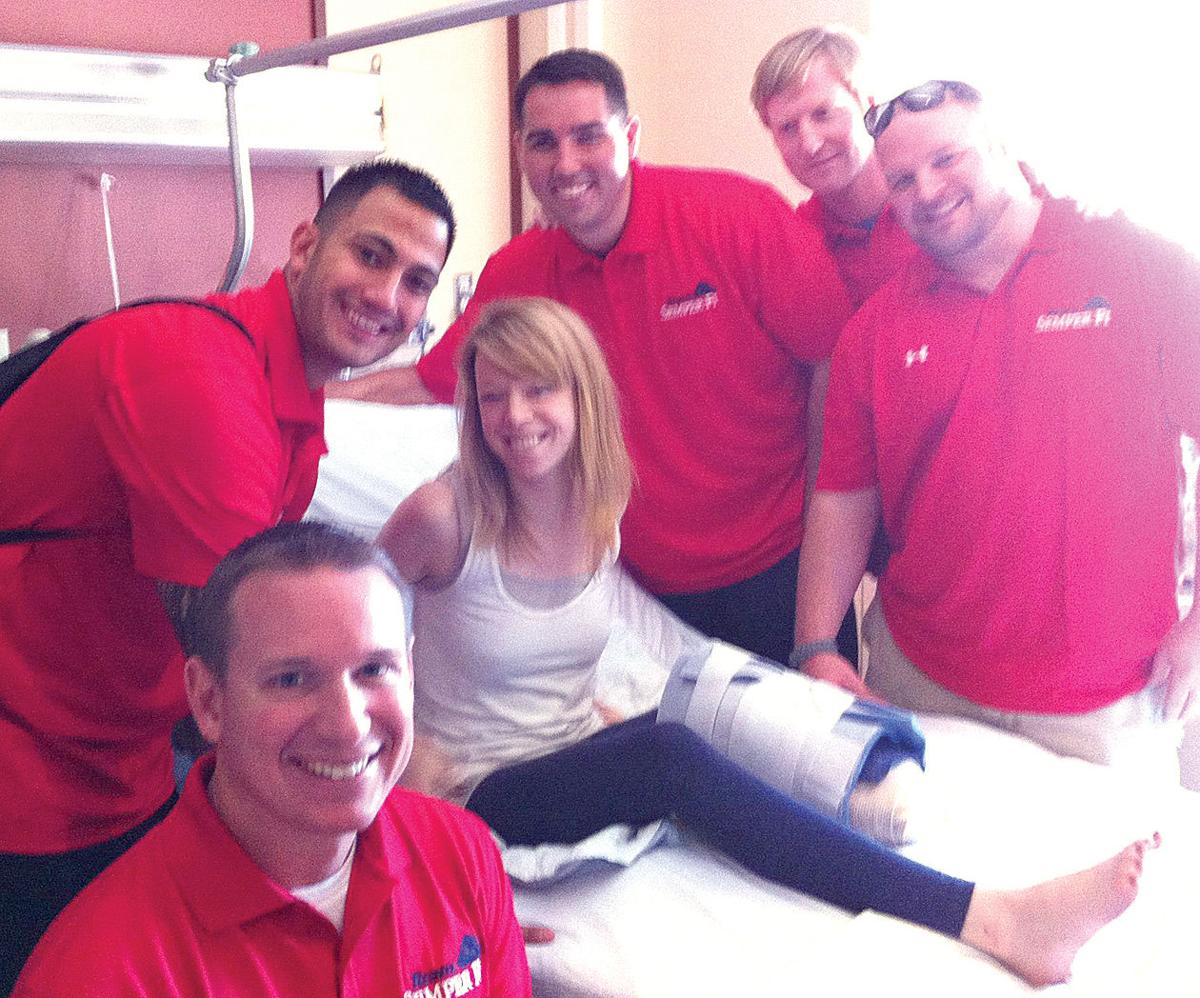 Among the Boston Medical Center patients BJ Ganem of Reedsburg, far right, and the Semper Fi Team visited last week was Adrianne Haslet-Davis, a 32-year-old dance instructor and professional ballroom dancer. As a result of her wounds from the Boston Marathon bombing, her left leg was amputated below the knee. Ganem is pictured here with other amputees of the Semper Fi Fund team, from left, Gabe Martinez, Cameron West, Bobby Donnelly and Josh Sharpe, seated. 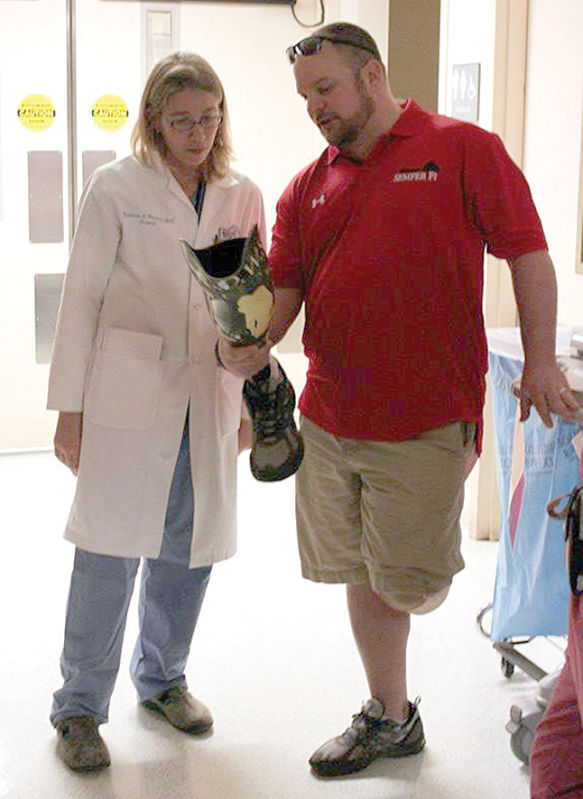 Iraq War veteran and amputee BJ Ganem of Reedsburg visits with a staff member at Boston Medical Center during a trip to the bombing site and victims of the attack April 15. 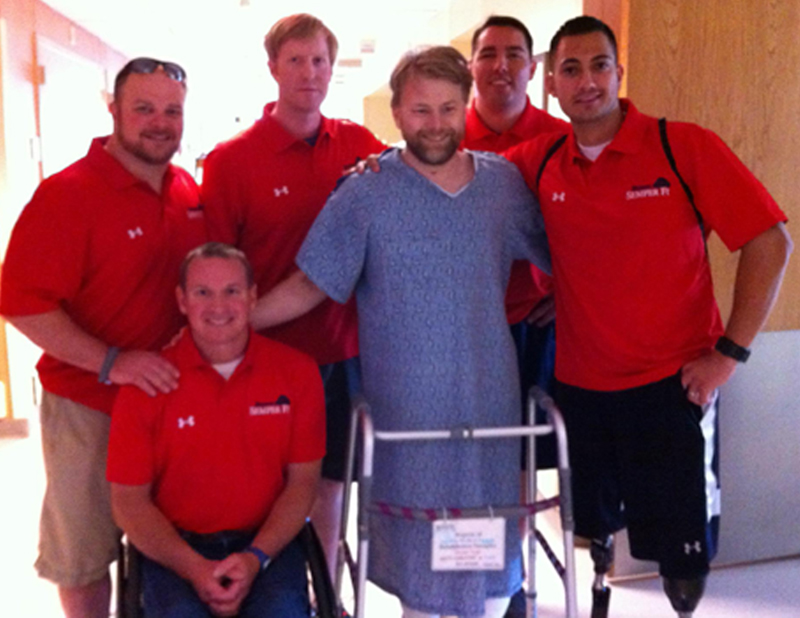 Even after his foot was amputated from an injury in the Iraq War, Reedsburg veteran BJ Ganem never stopped answering the call of duty.

Last week, Ganem, along with six other wounded comrades from around the United States, answered a different kind of call.

This time it was to Boston to help victims of the bombing attack on April 15 near the finish line of the Boston Marathon that claimed three lives and wounded nearly 300 people, many of them critically from limbs blown off in the bombing.

In the last two weeks, Ganem has traveled twice to Boston on a mission sponsored by the Injured Marine Semper Fi Fund to visit patients with injuries from the bombing that perhaps only someone like himself and those who accompanied him to Boston Medical Center can truly understand.

Ganem lost his foot while serving in Iraq in 2004 when an improvised explosive device, known as an IED, went off on Thanksgiving Day.

Ganem said he was in a hotel in New York City on April 15 glued to the TV as the news broke from Boston with replay after replay of the explosion and the bloody carnage it left behind.

It didn’t take long for him to send a text message to Semper Fi Fund founder and chief executive officer Karen Guenther to tell her he needed to go to Boston as soon as possible.

As it turns out, Ganem’s Semper Fi counterparts and amputees themselves, Gabe Martinez, Cameron West and Bobby Donnelly, were texting her at the same time as they, too, watched the horror unfold in Boston.

“I told her we need to get to Boston as soon as possible,” Ganem said, “because there are going to be a lot of similar injuries like we suffered in the military. The rest were texting her as well without any of us talking to each other first.”

With the Boston Medical Center under lockdown for the first few days after the bombing, the Semper Fi Fund team members didn’t leave until the following Saturday following a request from the nursing staff at the hospital urging them to get there.

Ganem said the spirits of the patients were surprisingly high, a testimony to their determination to go forward.

“We all knew that something like that could happen to us,” Ganem said. “These people (in Boston) had no idea. We thought we’d go in there and see people who said, ‘Why me?’ But they were more like we were. That was inspiring for us to see they could go forward and prove to these idiots that their violence and their bombs aren’t going to do anything to break our spirit.”

Ganem and his Semper Fi Fund team’s therapy was empathy and humor and to emphasize that life is not over.

“You want to dive in and take their pain away,” Ganem said. “We went in lightheartedly and said, ‘Welcome to the club.’ I’d take off my leg and show them the pros of being an amputee. You have a traveling ottoman — you can take off your leg and prop your legs up on it anytime. I told them you can drink out of it, so you have a ready mug.”

One of the victims was Adrianne Haslett-Davis, a 32-year-old dance instructor and professional ballroom dancer. As a result of her wounds, her left leg was amputated below the knee.

“I told her my daughter has Dance Central on Xbox Connect,” Ganem said. “She usually beats me every time but I score pretty high on it. I fully expect (Haslett-Davis) to do some great things like come around with new prosthetics for dancing.”

One of the symptoms of an early amputee victim is the feeling of what’s known as phantom pain where the lost limb once was.

“The height of them is right now so soon after the injury,” Ganem said. “It feels like it’s burning or it feels like you stepped on a nail or stubbed your toe. The worst for me was the itching. It’s nothing more than the nerves firing out and not getting a response and it sends a message to your brain that something is wrong.”

“A lot of them remember exactly what they were doing when it went down,” he said.

His prediction is that all the bombing victims will experience some kind of post-traumatic stress disorder, something he has seen many times among his own fellow soldiers.

Like the Boston victims, Ganem has endured multiple surgeries and therapy and continues his recovery to this day by helping other wounded soldiers deal with their recovery and acclimation to significantly changed lives once they’ve returned home.

Formerly the Dane County Veterans Services officer, Ganem took a position in February doing a similar job with the Semper Fi Fund as the Veteran to Veteran Lead for the Midwest region, covering 16 states.

He said he helps to ensure that injured warriors and their families get the benefits, care and resources from the Veterans Administration and their local communities, and acts as a mentor to veterans.

Ganem said he plans to return to Boston again soon because the mission continues.

“The nurses all told us when we came back the second time, that a lot of them didn’t want to do physical therapy. But after we left, their whole attitudes changed completely,” Ganem said. “So many were there for myself and others when we were injured. We felt like we were able to give back. It helped us come full circle and be able to give back like some gave to us.”

Ganem said he plans to be one of the Semper Fi Fund amputees who will run in the Boston Marathon next year right next to the bombing victims. The hope is to get them on hand cycles for the race.

Ganem will spend a year testing and training on a running prosthetic leg for the first time.

We have 20 spots in the Boston Marathon next year. We’ll have those people in hand cycles to say they’re back,” Ganem said. “They seemed dead set on it.”

Among the Boston Medical Center patients BJ Ganem of Reedsburg, far right, and the Semper Fi Team visited last week was Adrianne Haslet-Davis, a 32-year-old dance instructor and professional ballroom dancer. As a result of her wounds from the Boston Marathon bombing, her left leg was amputated below the knee. Ganem is pictured here with other amputees of the Semper Fi Fund team, from left, Gabe Martinez, Cameron West, Bobby Donnelly and Josh Sharpe, seated.

Iraq War veteran and amputee BJ Ganem of Reedsburg visits with a staff member at Boston Medical Center during a trip to the bombing site and victims of the attack April 15.