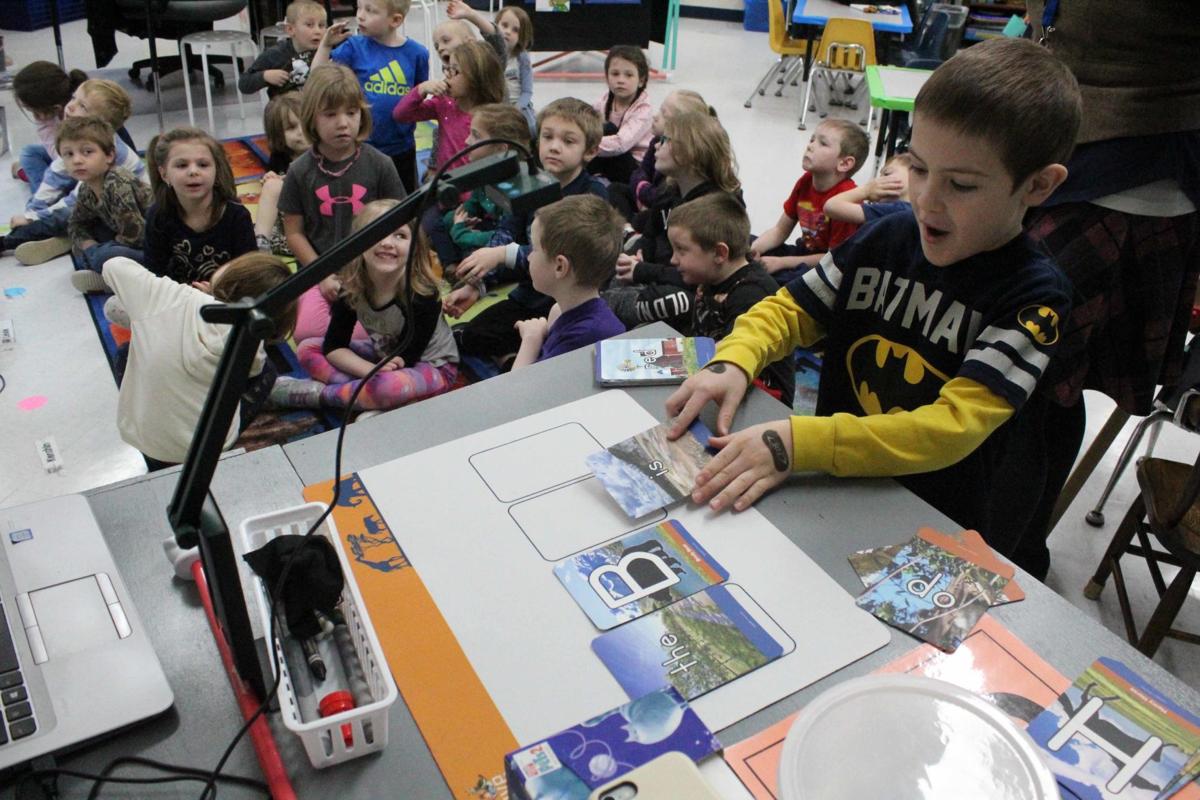 Weston Kindergarten student Aubrien Thering, 6, slides a card on a word mat under a camera to formulate a sentence with the Letters Alive reading kit. 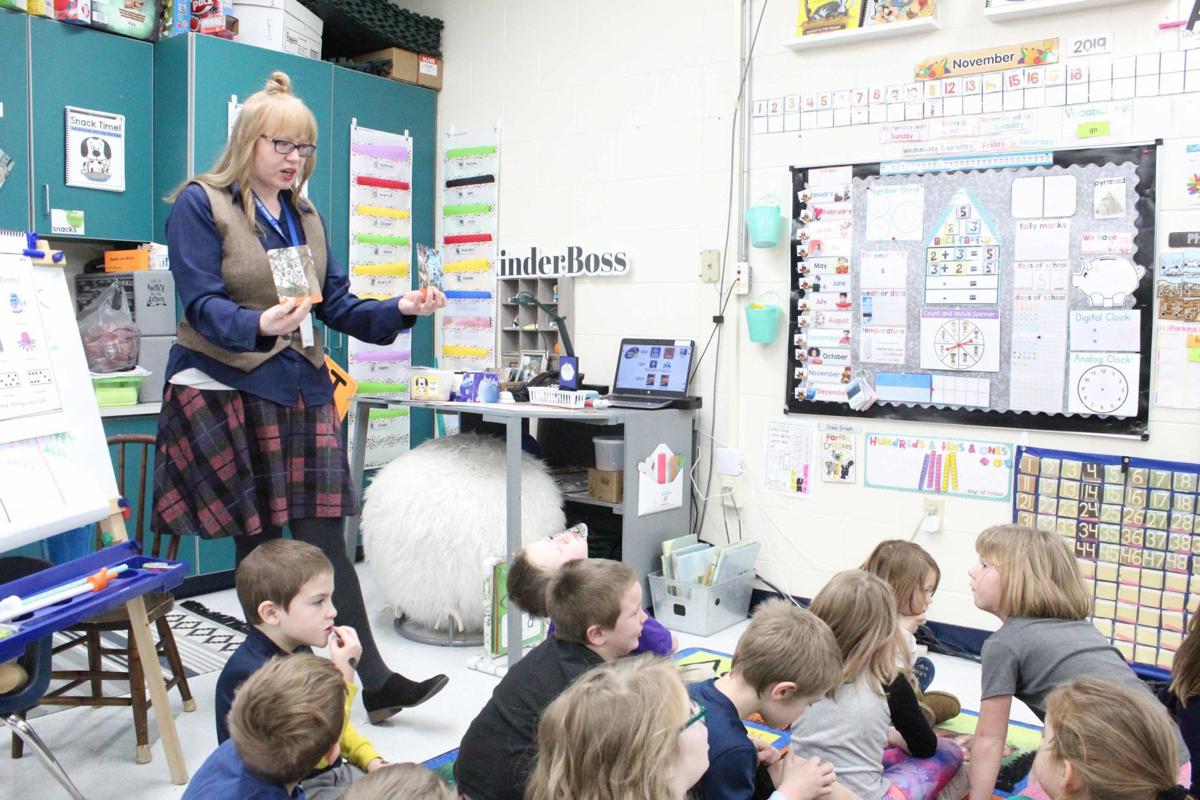 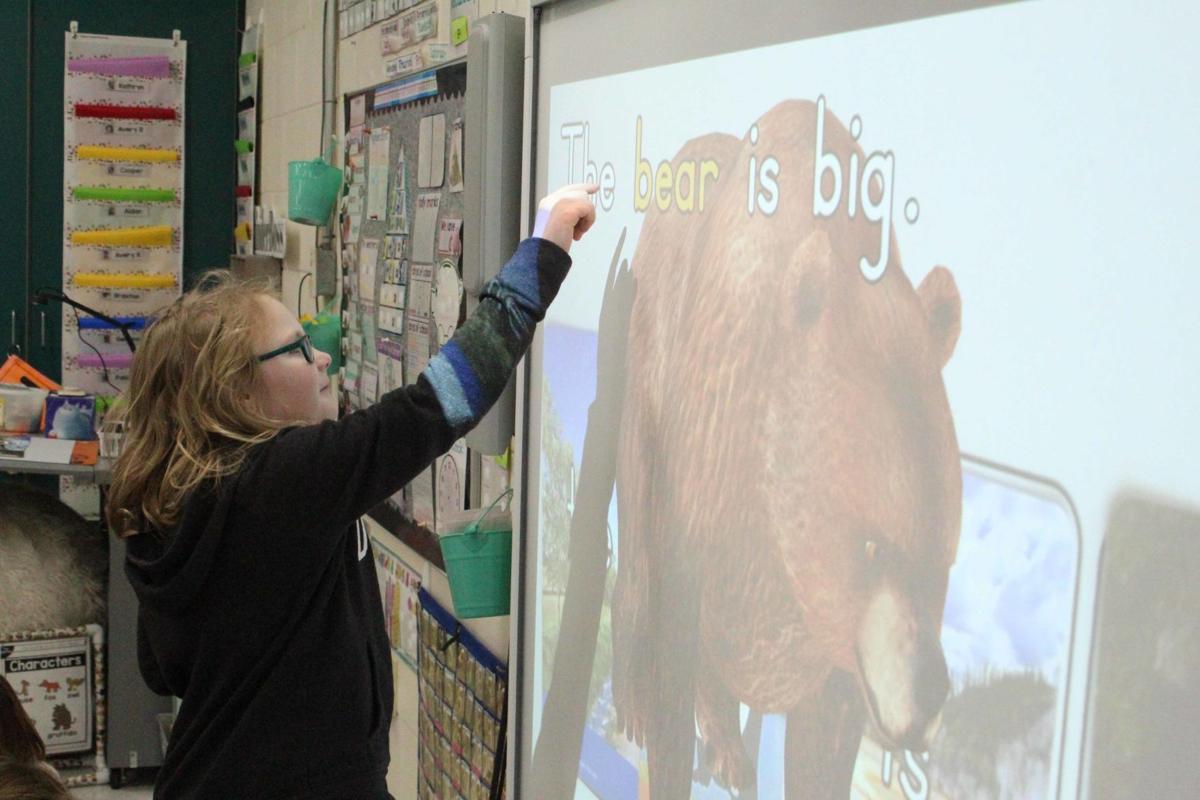 Every morning, students sit on a rug in their classroom and go to their “zoo” for a 10-15 minutes mini lesson of learning letters and building words and sentences.

Lewig uses Letters Alive, an augmented 3D reality software reading kit to reading, word building, sentence structure and grammar. The kit is produced by Alive Studios that has a similar program for math.

Each of the 26 letters is represented with an animal with two names to represent the long and short vowels of each letter. Each animal is enlarged on a projector using 3D augmented reality when assembled on a word mat under a camera and can respond to certain commands.

The program also uses word building and grammar skills by placing a word or sentence together under the camera and shows it on a projector. She said the rug is also interactive with an app and a smart device, when placed over top of the rug creates an opportunity for students to learn science and interact even more with the characters.

“When they see these things it makes such a deep connection to them that they are really remembering this,” Lewig said.

Lewig can have students find the noun or verb in a sentence and children can hear the sound of each letter by pressing a button on a projector. She said the program is based off common core and Wisconsin State Kindergarten Teaching Standards.

Rather than showing students with a picture card and making the sound herself, the program helps Lewig’s students interact with the animals by creating a long lasting, social and emotional connection with learning; helping children focus more on the lesson. It’s also helps students be better prepared for entering into first grade and close the achievement gap.

“One thing I always say to parents nowadays is kindergarten is what first grade was when I was a child. That is the gap that’s kind of been pushed in American education,” she said. “While that is kind of a scary gap that’s been pushed, when it’s done properly kindergartners can assimilate this, but you really do need to have a lot more hands on an interactive instruction.”

Lewig said the Letter’s Alive program carries into everything else she teachers, like hand writing, spelling, sight word connections and writing workshops.

She’s used the program in her classroom since the beginning of the school year in September and recent assessments show almost 90% of her 26 students have memorized the alphabet with letter name an letter recognition, she said. The program has also allowed teaching other components at a faster rate.

“At this point (of the year) I would not have even have been teaching long and short vowel(s) but I would say almost 60% of them understand that concept,” she said.

Lewig, whose been a kindergarten teacher for 12 years and four at Weston Elementary School, said she learned about the program from a speaker at a state kindergarten conference and independent research. Knowing every child learns differently, she thought it would be an effective program for her students.

She conducted online private fundraising to purchase the software and presented the project to the school board to obtain funding for the rug, she said. In the future, she wants to purchase the math software by Alive Studios to teach her students math skills.

Weston School District Principal Gary Syftestad said the school district just started a new early literacy initiative for grades K-5 this fall and is still evaluating what it wants to achieve with the program. He said the Letters Alive program for Lewig’s kindergarten students helps them understand the basic fundamentals of reading and writing and to build on those skills as they get older.

He said finding new ways to teach students those fundamentals is nothing new for Lewig.

“She’s always looking for ways to engage her students and enjoy learning,” he said.

JUNEAU – Residents of Dodgeland School District can learn more about the referendum they are voting on by watching a video on the district’s website.

Students in the Beaver Dam Unified School District went back to work Monday, but did not rot return to the school buildings that shut down in …

Pardeeville, Lodi schools turn to online learning while shut down to limit spread of COVID-19

The Baraboo School District is developing daily instructional plans for families to use at home while schools remain closed, but it won’t requ…

Like public schools, Baraboo’s three private schools have had to scramble to develop plans to remotely educate their students for the duration…

6 candidates vie for 3 seats on Pardeeville School Board

Six candidates are competing for three seats on the Pardeeville School Board in the April 7 election.

The Portage Community School District is doing everything it can to stay connected to students and their families during the indefinite, state…

Weston Kindergarten student Aubrien Thering, 6, slides a card on a word mat under a camera to formulate a sentence with the Letters Alive reading kit.