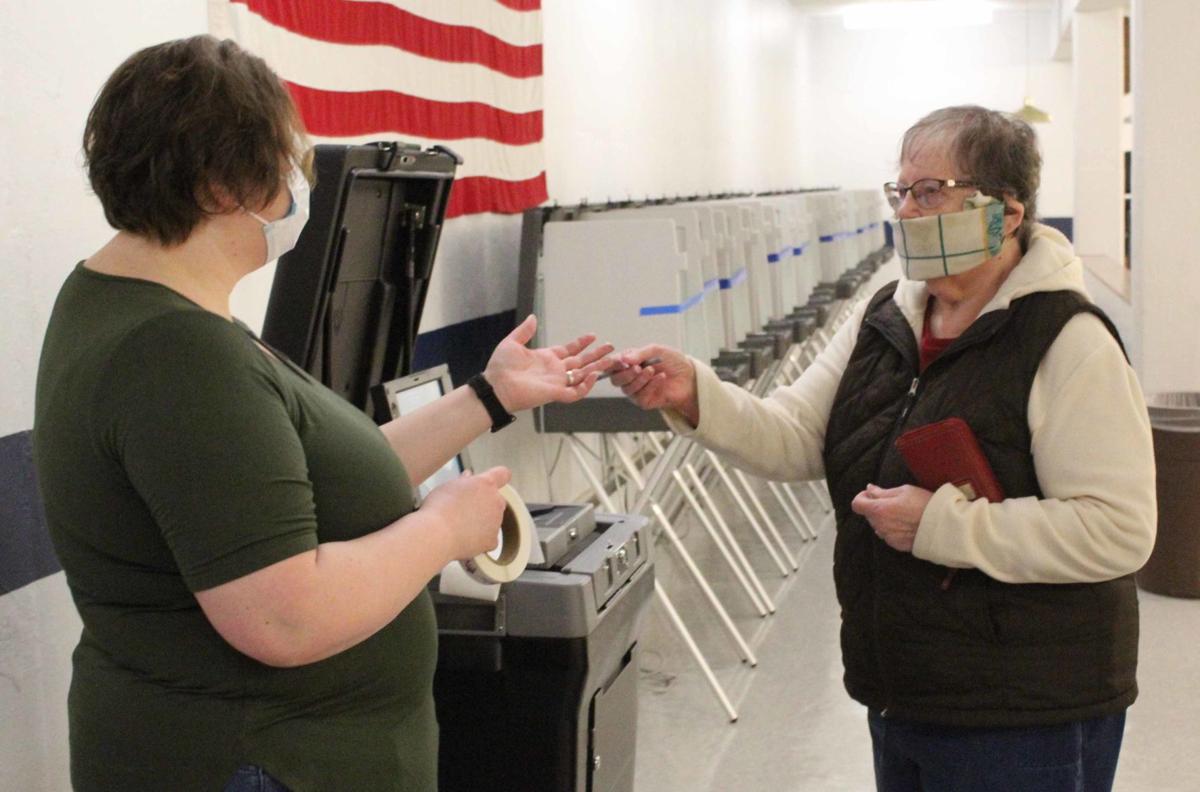 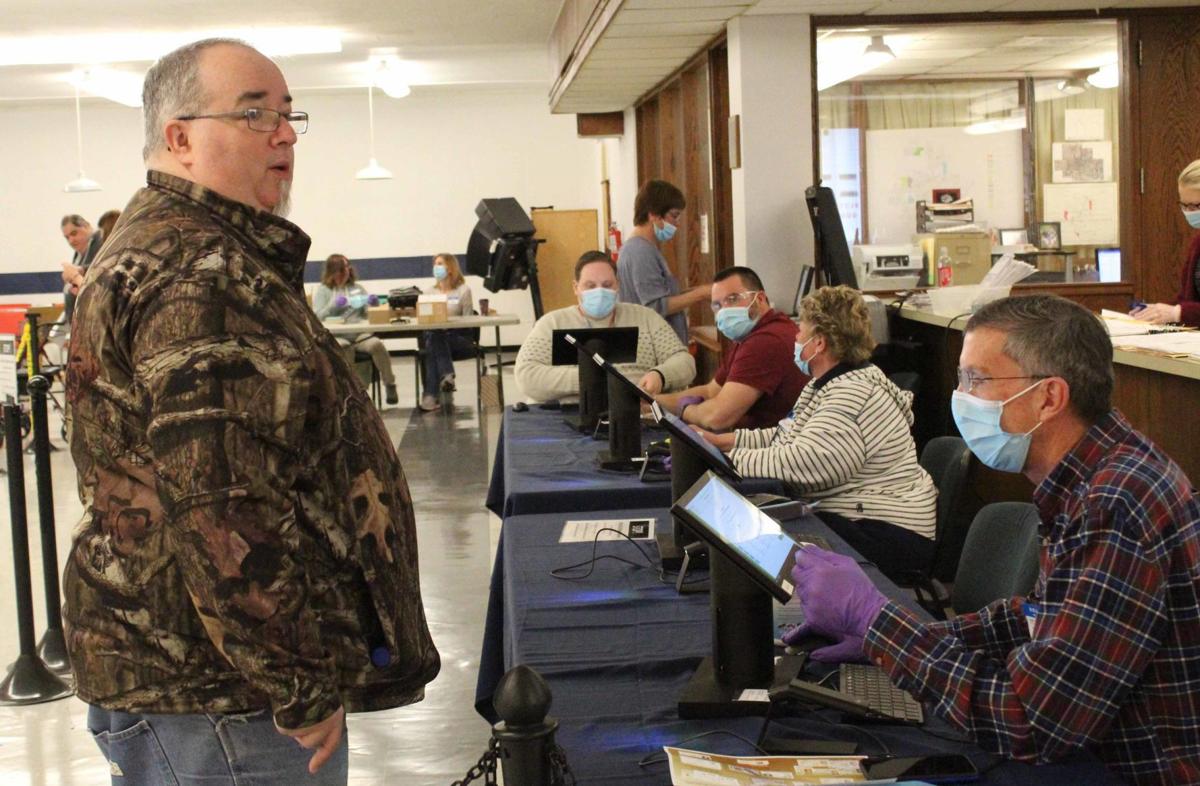 Reedsburg resident Chris Brown, left, registers for his ballot while Mike Rocha, a poll worker on the right, checks him in April 7 at the Reedsburg Recreation Center. 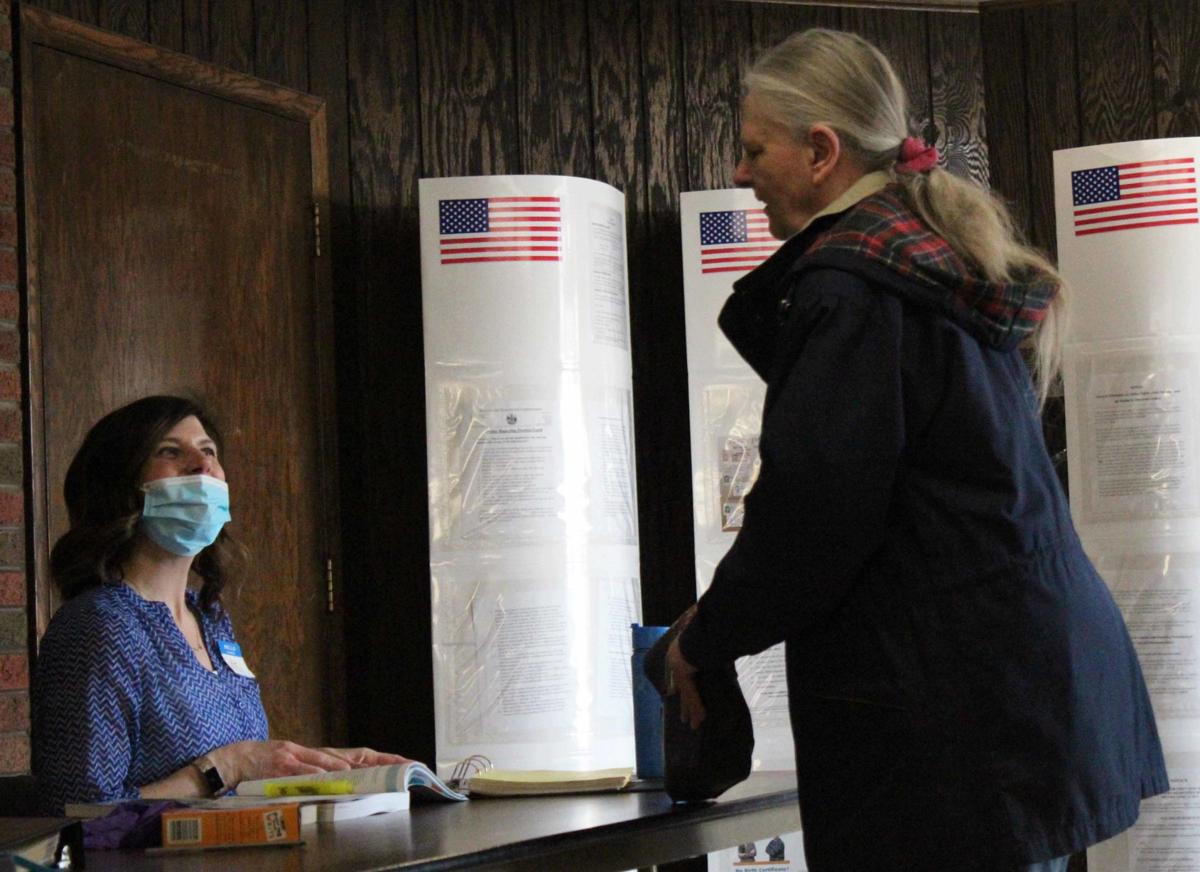 Reedsburg resident Shari Miller, right, checks to see if she is registered to vote with Kit Weis, a poll worker on the left, April 7 at the Reedsburg Recreation Center during the spring primary election. 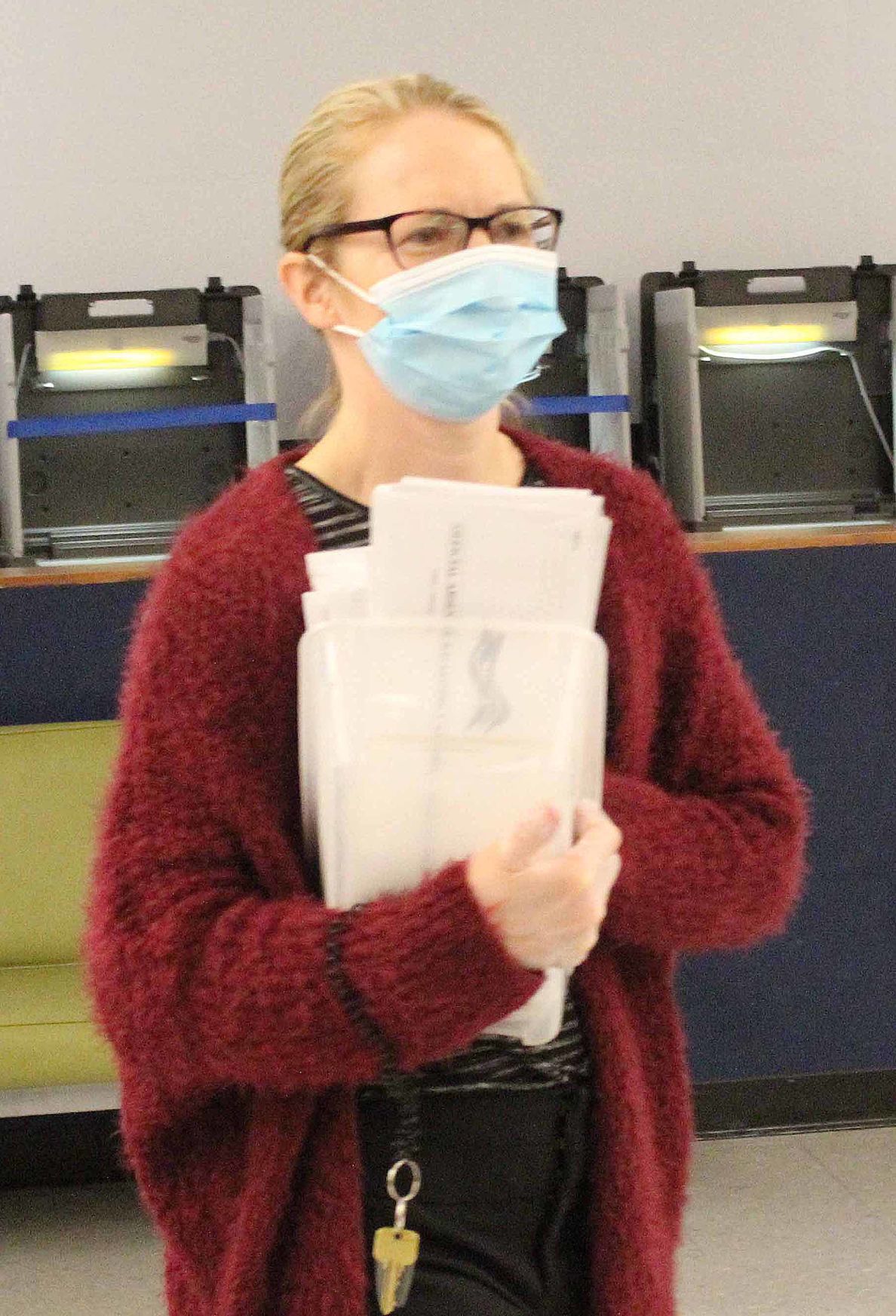 Reedsburg Deputy Clerk/Treasurer Anita Young transfers absentee ballots to be organized for counting April 7 at the Reedsburg Recreation Center, one of Reedsburg's polling places for residents to cast their ballot in person.

Reedsburg resident Larry Novak was cautious before walking into the Reedsburg Recreation Center, examining the amount of cars and crowds outside before stepping foot in the building to cast his ballot April 7.

Seeing there wasn’t a lot of people inside that morning, he thought it was safe to vote in person. He had forgotten to register for an absentee ballot, he said.

“If I had seen a lot of cars out here or people standing out here I wouldn’t have stopped,” Novak said. “I’m careful.”

On April 6, confusion set in whether or not the state’s primary election was going to be held on its scheduled date or postponed with Gov. Tony Evers issuing an executive order to close all polling places to in-person voting to June 9, moving the date of the election in his latest attempt to slow the spread of COVID-19.

Republicans immediately challenged the mandate after it was issued and the State Supreme Court struck Evers’ order down hours later, announcing the election will go on as planned. The U.S. Supreme Court also ruled how absentee ballots will be conducted, ordering a postmarked date of April 7 to be counted.

Despite casting his ballot in person, Novak said he thought it was a terrible idea to keep the polls open for in-person voting during the pandemic. Fifteen states around the nation have changed the date of its primary election due to the pandemic.

“I think they are a bunch of people who can’t make up their mind. I don’t think people should be coming here to vote,” Novak said of the legislature and the idea of still hosting in-person voting. “Putting it off for a while would have been just fine. It’s not a good thing to have all these people coming here.”

City Clerk/Treasurer and Finance Director Jacob Crosetto said the confusion set in April 6 was a little chaotic with different answers from state officials. Crosetto said city officials still kept preparing to open the Reedsburg Recreation Center to in-person voting as a precaution depending on the decision the courts made with Evers’ mandate.

“We would have been set up one way or another,” he said. “We had everything ready to go.”

Reedsburg officials had also finished other work, training and finding new poll workers while letting go many of its poll workers over age 60, the age group shown more at risk of contracting the coronavirus and taking other precautionary measures to prevent the spread of the coronavirus.

Crosetto said all poll workers had masks and face shields to wear, floors tapped off in six-feet increments, polls apart by six feet and multiple hand sanitizing stations set up. He said city staff worked over the weekend of April 4-5 to get absentee ballots out for those who requested them.

Overall, 18 people helped at the Reedsburg Recreation Center, its polling place for Reedsburg residents, including poll workers and two soldiers from the Army National Guard. They made sure the public stood six feet apart and helped other poll workers as needed, he said. Voters’ entered and exited out of a different door to prevent passing each other.

Reedsburg residents adjust to “the new normal” with COVID-19 pandemic

Crosetto said the decision from the U.S. Supreme Court took him by surprise. He said absentee ballots have to be postmarked by April 7 to be counted. A drop box was at city hall for those to drop off their absentee ballot, he said. He explained an absentee ballot postmarked with a date of April 7 will be accepted as late as April 13 but if a voter misses the mail deadline and wants to bring it in April 8 or April 9 it won’t be accepted.

Results will not be released until April 13 after all ballots have been counted, including absentee ballots, he said.

Mike Rocha, who was a poll worker at the Reedsburg Recreation Center, thought the election was going to be postponed after Evers’ issued his order April 6 but after checking the news later in the evening, after the court’s decision, he realized the primary election was still on.

“It would be best if the governor and legislature worked together to make a decision,” Rocha said when asked about the chaos that happened April 6. “One way or another they should have worked together.”

Rocha said he decided to volunteer as a poll worker because of the time he had and the help that was needed. With the circumstances of the virus, he thought Reedsburg officials did a good job protecting poll workers and the community from the elements.

“I think we are well protected with everything we have,” he said

Crosetto said in an April 7 interview he wasn’t sure how many people would show up to the polls to vote in person. He said Reedsburg has issued a record number of more than 2,000 absentee ballots compared to 1,200 in the 2016 election, with 1,300 to 1,400 have been received so far. in an average spring election, Reedsburg normally has about 1,900 voters between absentee and in person submissions, he said.

While the Reedsburg area didn’t have any contested elections for the August 11 partisan primary, officials saw a sharp increase in the number …

Reedsburg resident Chris Brown, left, registers for his ballot while Mike Rocha, a poll worker on the right, checks him in April 7 at the Reedsburg Recreation Center.

Reedsburg resident Shari Miller, right, checks to see if she is registered to vote with Kit Weis, a poll worker on the left, April 7 at the Reedsburg Recreation Center during the spring primary election.

Reedsburg Deputy Clerk/Treasurer Anita Young transfers absentee ballots to be organized for counting April 7 at the Reedsburg Recreation Center, one of Reedsburg's polling places for residents to cast their ballot in person.