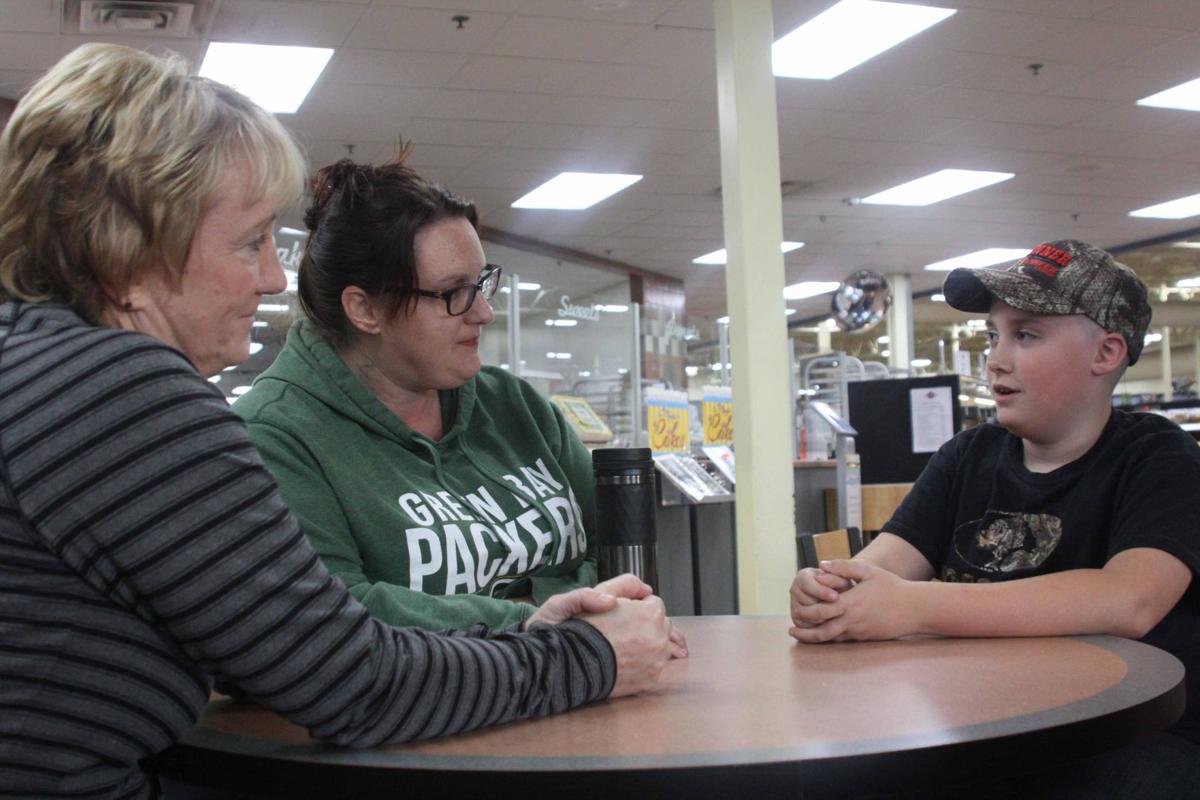 From right Jacob Miller, a ten-year-old from Reedsburg, talks about potential ideas he has for a splash park in Reedsburg as his mother Pam Miller, center and Viking Village Foods General Manager Pam Coy listen. 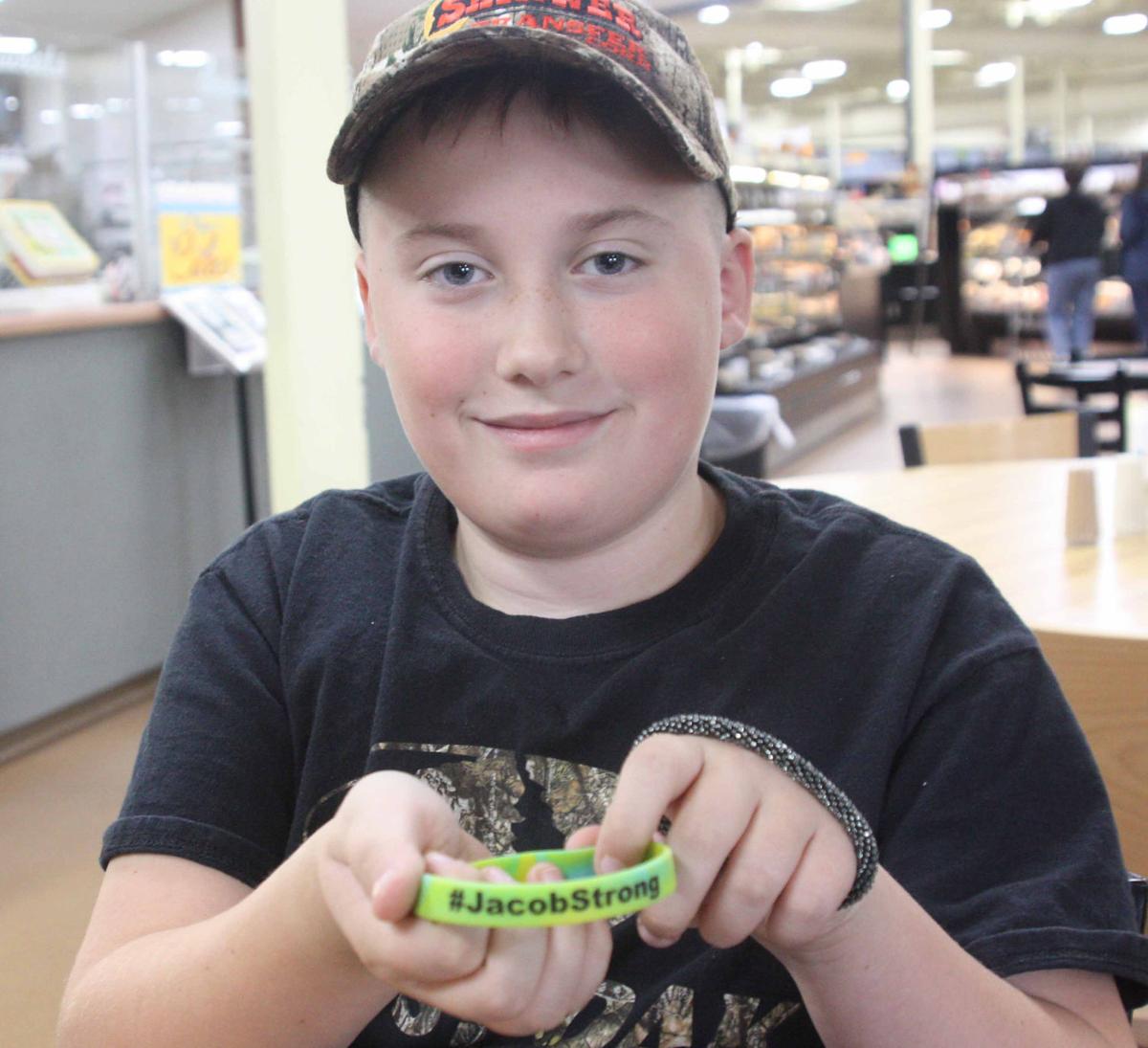 Jacob Miller, a ten-year-old from Reedsburg, shows a bracelet made by his classmates at the School District of Reedsburg to show their support when he fought cancer two years ago.

While the idea of bringing a splash pad to Reedsburg is in its very early concept stage, fundraising efforts have begun to make it a reality.

The idea of a splash park came about when Jacob Miller, a 10-year-old from Reedsburg, was thinking of ideas to give back to the Reedsburg community when battling Burkitt Lymphoma and going through chemotherapy treatments at the University of Wisconsin Madison Children’s Hospital.

“At the time I didn’t really know about cancer,” Miller said.

The family’s strong faith and the community support got them through that tough time. Jacob said he received over 400 letters from community members to help him battle through the tough journey ahead. Pam Miller said the surrounding Reedsburg schools created bracelets and t-shirts that said “Jacob Strong” to show their support.

“It was amazing,” Pam Miller said. We received so many letters I ran out of room to put them on the walls. It was so cool.”

“Reedsburg is a little town that if something bad happens everybody comes together,” Jacob Miller said.

While in the hospital, Jacob Miller started thinking about how to give back to the community that had helped him and his family through the difficult journey. Originally from Colorado, he also thought back to his early years when his mother would take him to a local splash park and believed it would be a nice addition for the Reedsburg community as a safer option for children to play in the summer time and help reduce the risk of water related injuries, like drowning.

When the Miller’s were preparing for a benefit for Jacob, Pam Miller met Pam Coy, the general manager of Viking Village Foods. Coy not only donated items for the benefit, but also started to help with the fundraising efforts for the splash park. Coy contacted Mayor David Estes and Parks and Recreation Director Matt Scott about the idea and both jumped on board.

Jacob will turn 11 years old Nov. 15 and said he has not had any treatments for one year. The fifth grader said he doesn’t have to go to any more checkups for another six more months. While the city is starting to look for designers for the splash park, Jacob has a notebook full of ideas and is constantly asked from his friends at school how the design and process is going.

Jacob said the one component he’d like to do with the design is to find a way to honor all children who have battled cancer, who have lost their life and survived the disease.

The first fundraiser for the splash pad was held in late September at Viking Liquor Store with a silent auction at its adult night which raised $1,400 for the splash park. The Miller’s will host a bake sale at Viking Village Foods Nov. 30 and Dec. 1 with all proceeds going to support a splash pad.

The city has set up a fund for anyone who would like to donate towards the potential project and can contact city hall at 608-524-6404.

In addition to the fundraising efforts, the splash pad is a part of an aquatics study the city is hoping to conduct next year to find out the condition of the municipal pool to see if renovations or upgrades need to be made.

Scott said if the funding for the study is approved for the 2019 budget process it will begin in January.

He said the city had looked at the potential of the city getting a splash pad and thought with the study coming up it would be a good time to bring the topic back to the table.

The city is moving forward with plans to install a splash pad in Reedsburg.

While the Great Sauk State Trail has yet to reach Reedsburg, city officials are beginning discussions to prepare when the day arrives.

Reedsburg is continuing its discussions on how to fund a splash pad with its estimated $750,000 price tag.

Reedsburg officials are hoping its anticipated splash pad project could break ground next spring and open by summer 2021.

From right Jacob Miller, a ten-year-old from Reedsburg, talks about potential ideas he has for a splash park in Reedsburg as his mother Pam Miller, center and Viking Village Foods General Manager Pam Coy listen.

Jacob Miller, a ten-year-old from Reedsburg, shows a bracelet made by his classmates at the School District of Reedsburg to show their support when he fought cancer two years ago.