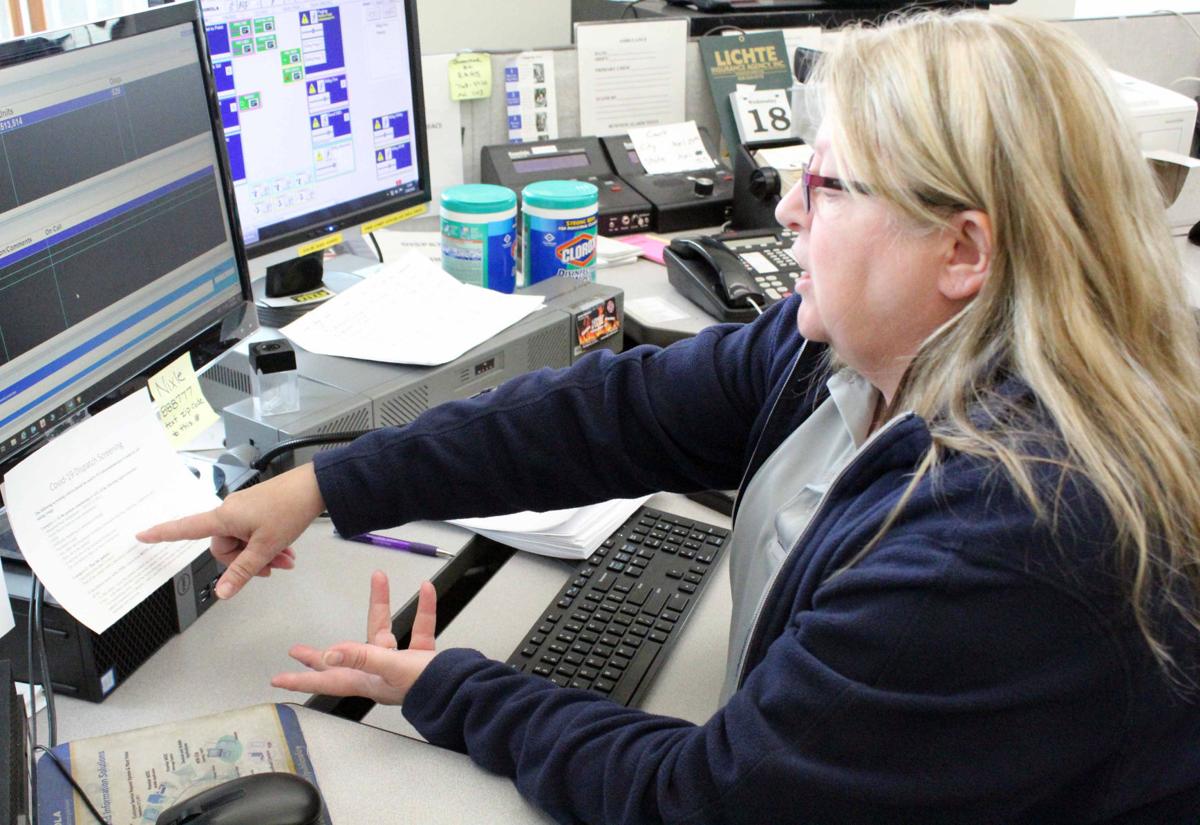 Reedsburg Police Department Dispatcher Diane Fry reviews the list of questions from the Center for Disease Control and Prevention to screen people over the phone to see if a patient at a scene potentially has a case of COVID-19. The measures are to help law enforcement and paramedics prepare and take proper measures to reduce the potential of coming in contact with the virus. 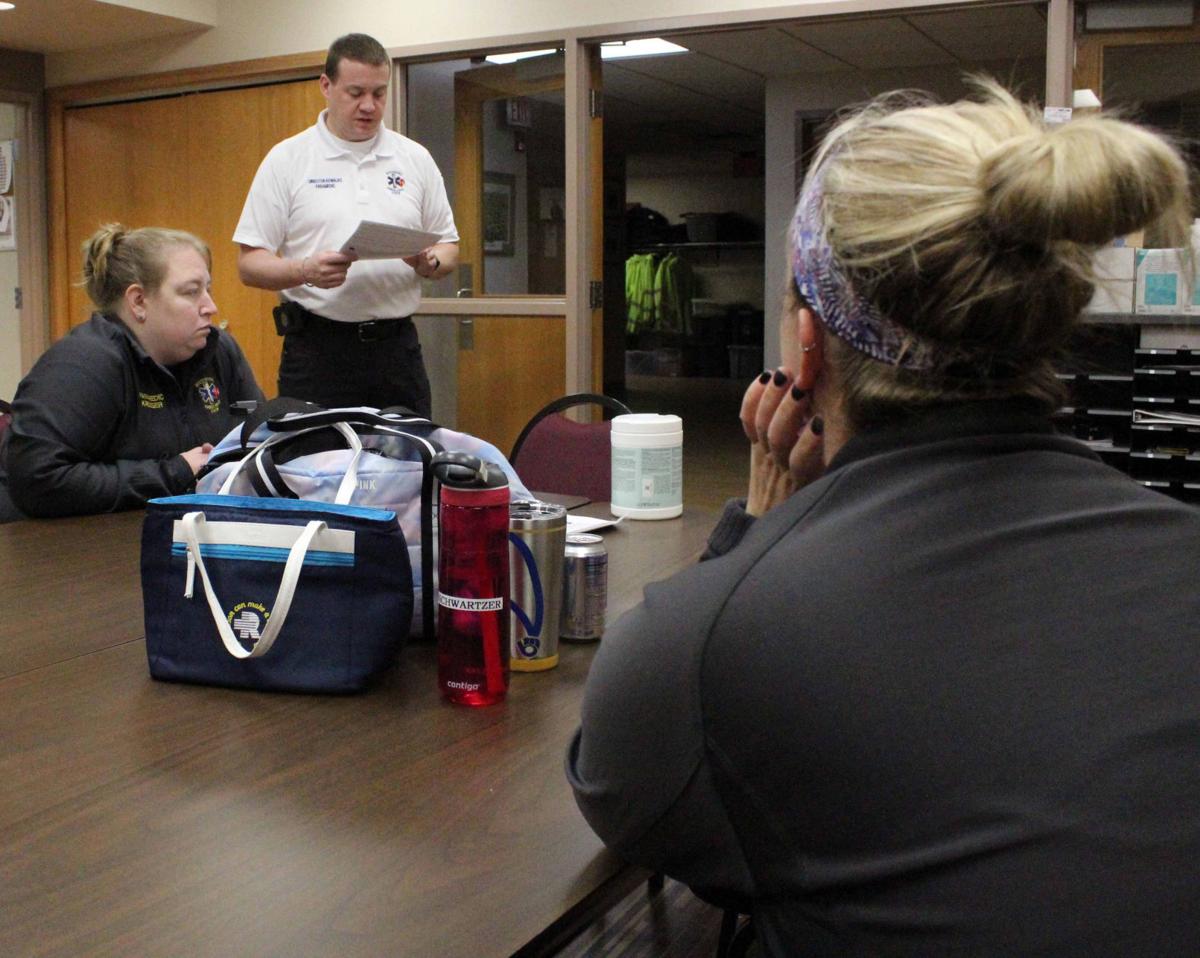 Reedsburg Area Ambulance Service and Emergency Management Director Josh Kowalke gives a daily briefing on an update of COVID-19 cases in Sauk County, as well as procedures and precautions for the on call paramedic staff the morning of March 19. 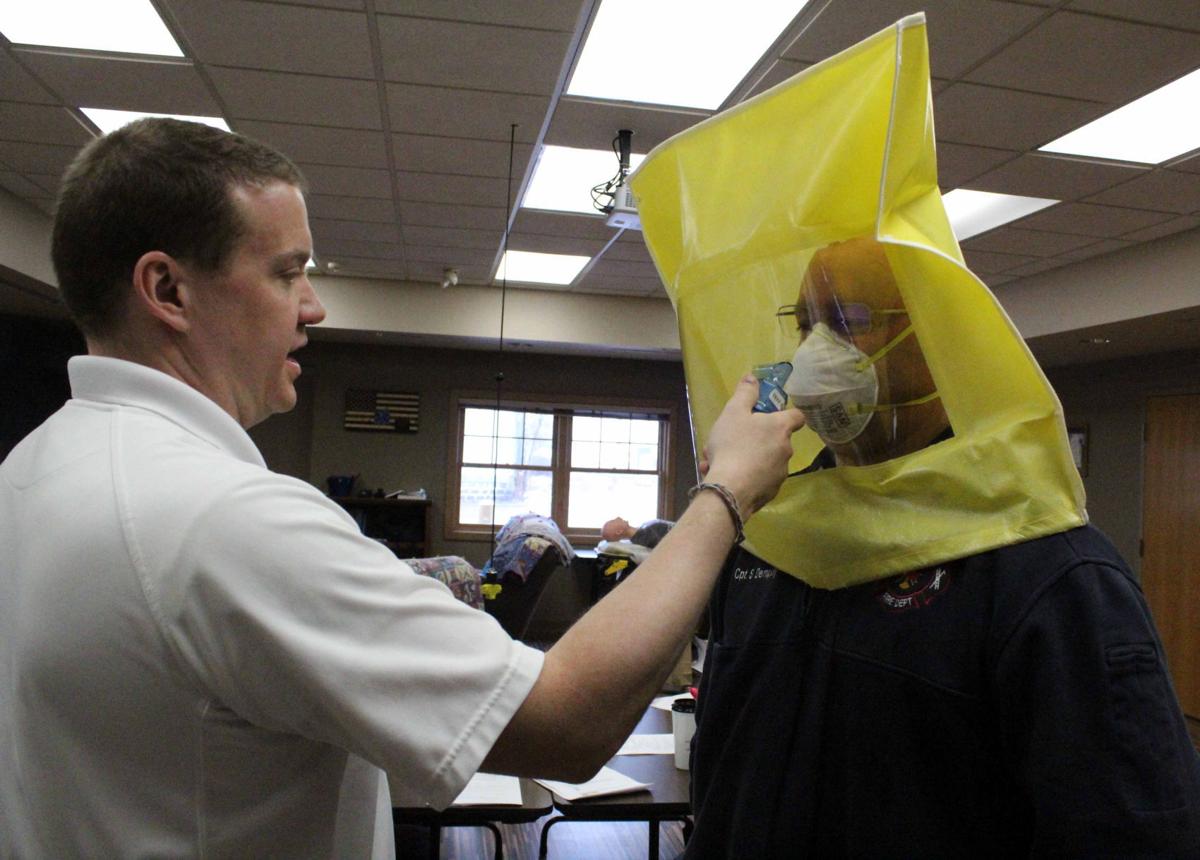 While officers on the Reedsburg Police Department and paramedics with the Reedsburg Area Ambulance Service are taking necessarily precautions during the COVID-19 pandemic, they are ready to respond in an emergency.

Reedsburg Area Ambulance Director and Emergency Management Director Josh Kowalke said dispatch is helping ambulance staff by screening people with a list of questions from the Center for Disease Control and Prevention anytime an ambulance is requested.

The information helps paramedics take additional measures to prepare before arriving on scene, like applying masks and goggles.

Once on scene, a mask is placed on a patient if they have respiratory symptoms as an additional measure to contain the virus, he said.

Even for a case where COVID-19 isn’t suspected, paramedics are still applying a mask to their face whenever on scene to make sure they are protected from potential contact with the virus, he said.

While the supply of masks and gowns is at what Kowalke said is a normal supply, staff have still been told to limit the amount of times it uses that supply to conserve what is left.

“We’re using them sparingly, but appropriately,” he said.

Daily meetings are held with staff to remind paramedics of updates of symptoms of the coronavirus and a chance to ask questions. Kowalke said he communicates with Sauk County Emergency Management regularly for updates on any confirmed cases and additional measures for staff and city officials to take with the outbreak.

He said in a March 18 interview the amount of calls the ambulance center is at its normal levels, which he attributes to people staying home more. Even when Columbia and Sauk County Health Department’s confirmed its first cases March 18-19 he said the amount of calls has not changed.

Reedsburg Police Chief Patrick Cummings said in a March 18 interview the staff of the police department is trying to take as many precautions as possible to prevent the spread of the virus, including dispatch or officers handling some calls over the phone if it doesn’t compromise the investigation. If they do have to respond to someone’s house officers may stand six feet away to make sure it follows the recommendations for social distancing.

“You got to use discretion on each case. If it’s something where someone can be given a citation to appear in court later, then obviously we’ll use that route if that’s an option,” Cummings said. “But obviously, that’s not the case in every situation and certain laws have things where mandatory arrests are required so we still have to act in that precaution.”

Community demonstrations, like K-9, has been suspended for the time being as well as ride along’s in police cars and tours of the police department, he said. Fingerprinting services have also been suspended, he said.

In a March 19 press release, the police department said the reception window in the police department’s lobby will be closed and any DMV transactions to include renewals and title work will not be handled. Those who need to renew or register a vehicle please use the Wisconsin DMV online services, according to the release. People can still have contact with the dispatcher after hours in the lobby, which is open 24 hours a day, Cummings said.

If there is an interview being conducted, the police department makes sure it disinfects the room, including tables and chairs, police cars and booking rooms to make sure everything is clean, he said. Janitorial staff is also working hard to keep the city buildings clean and disinfected, including the police department, Cummings said. Hand sanitizer is located in the lobby for staff to use and the department is also telling staff to take other preventative measures, like washing hands

Under state law, anyone who willfully violates a public health order could face imprisonment of up to 30 days and/or a $500 fine. Ryan Nilsestuen, Evers’ legal counsel, said in a March 17 article with the Wisconsin State Journal the order will be enforced primarily by local officials.

“It really does depend on the situation and the circumstances obviously each case is different,” Cummings said. “I think most things are pretty clear cut because there’s has been pretty detailed direction given by Gov. Evers on this direction, but it seems like there is quite a few new updates or orders that get put out as more data comes in.”

Cummings said he hasn’t seen an increase in general crime rates since the tougher mandates have been put into place, which he contributes to people staying indoors more with the mandates and advisories from the state and Center for Disease Control and Prevention.

Reedsburg officials declared a health emergency amid the growing cases of COVID-19 around the state and nation.

While Jayson Pettit’s phone was ringing off the hook with take-out orders at J’s Pub and Grill for its Friday Night fish fry, sales were lower…

Besides personnel and equipment updates, Reedsburg’s emergency operations plan will include a more detailed setup for evacuations.

Crime in Reedsburg decreased during Gov. Tony Evers’ Safer at Home order and police issued no official written warnings or citations for those…

Reedsburg Police Department Dispatcher Diane Fry reviews the list of questions from the Center for Disease Control and Prevention to screen people over the phone to see if a patient at a scene potentially has a case of COVID-19. The measures are to help law enforcement and paramedics prepare and take proper measures to reduce the potential of coming in contact with the virus.

Reedsburg Area Ambulance Service and Emergency Management Director Josh Kowalke gives a daily briefing on an update of COVID-19 cases in Sauk County, as well as procedures and precautions for the on call paramedic staff the morning of March 19.