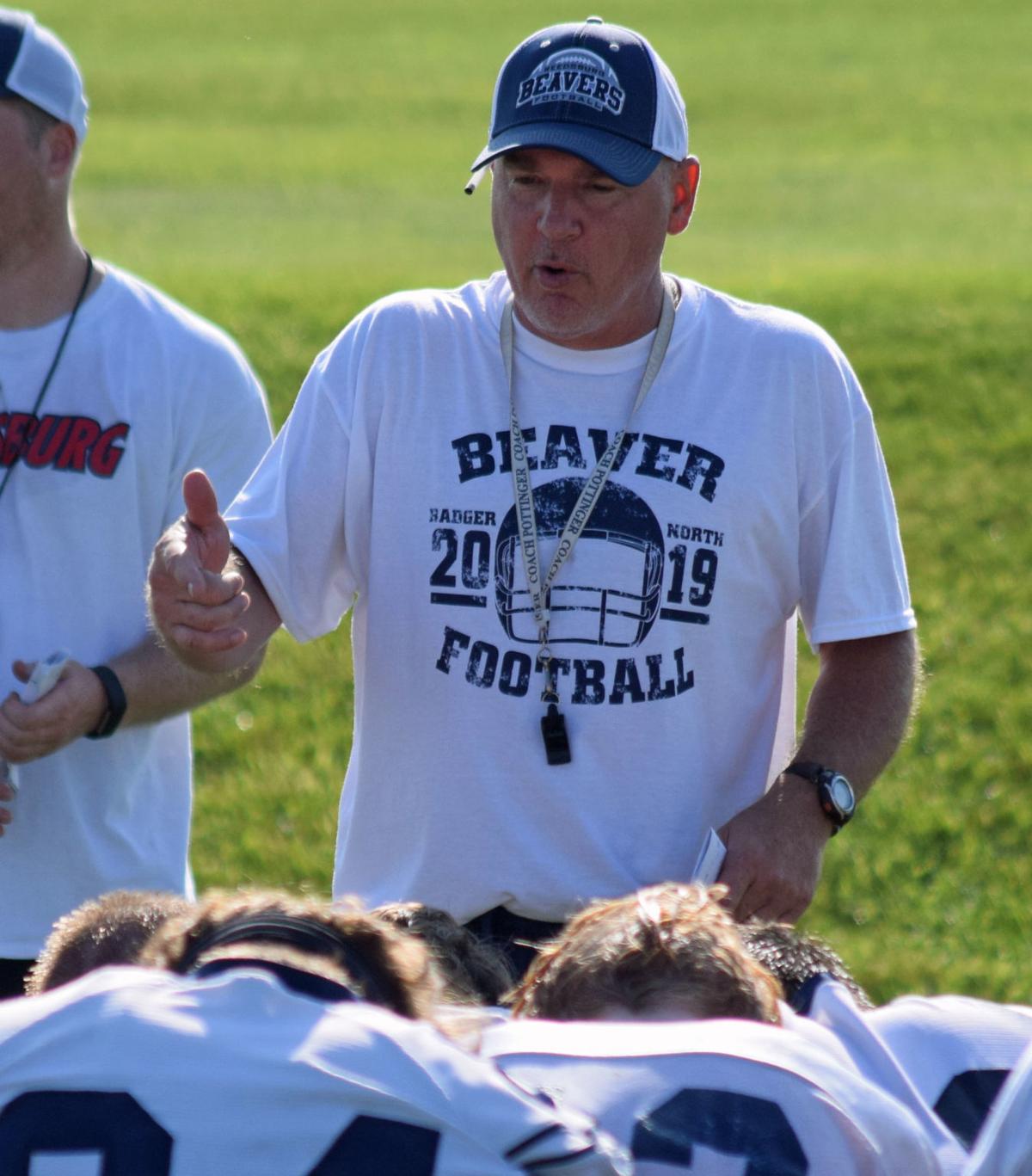 Reedsburg coach Brian Pottinger talks to his team during a break in the Beavers' practice on Aug. 6. Pottinger is entering his 14th season in charge of the Beavers. 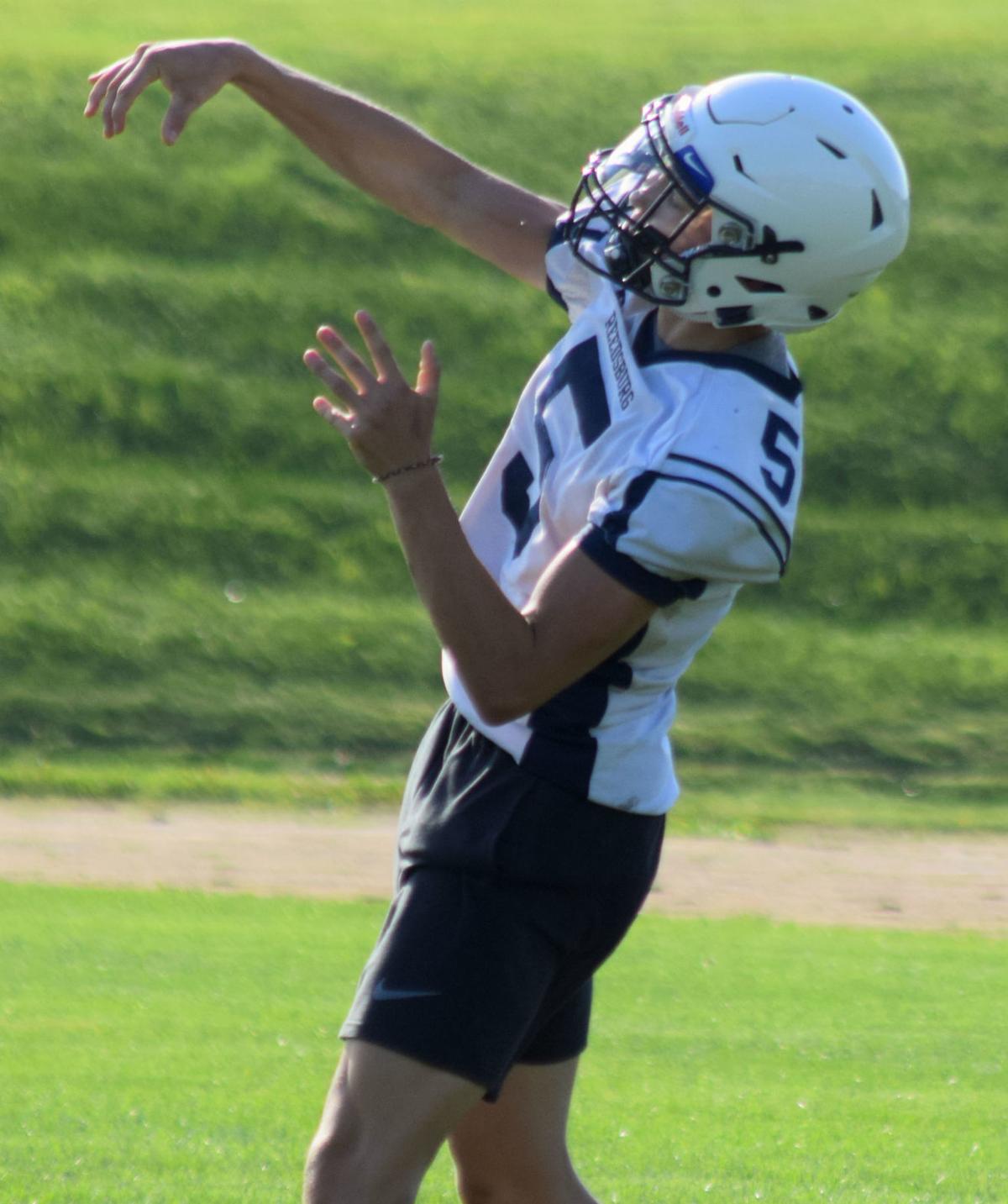 Reedsburg senior Ethan Lee follows through on a pass during an offensive drill in the Beavers' practice on Aug. 6. Lee is looking to make an impact this season after being limited to just four games due to injury last year. 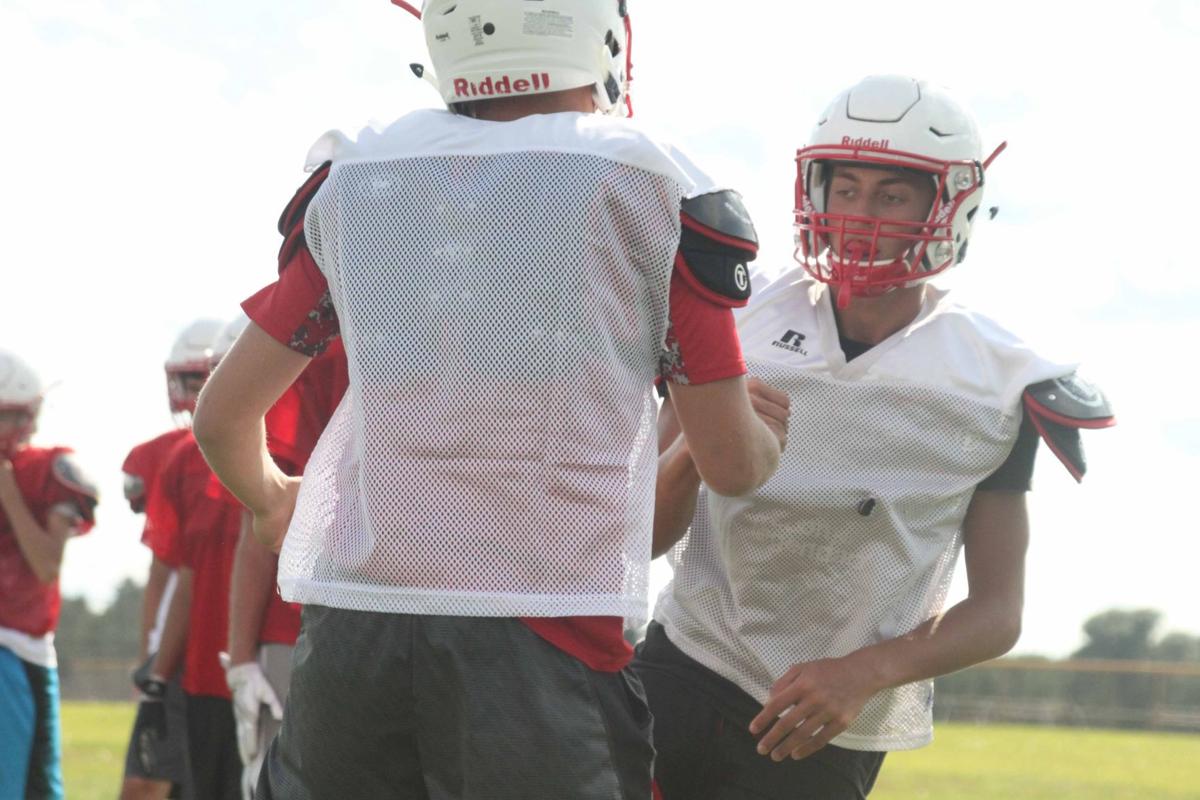 Jaron Murphy, right, is among the potential returning players for Necedah in 2018. 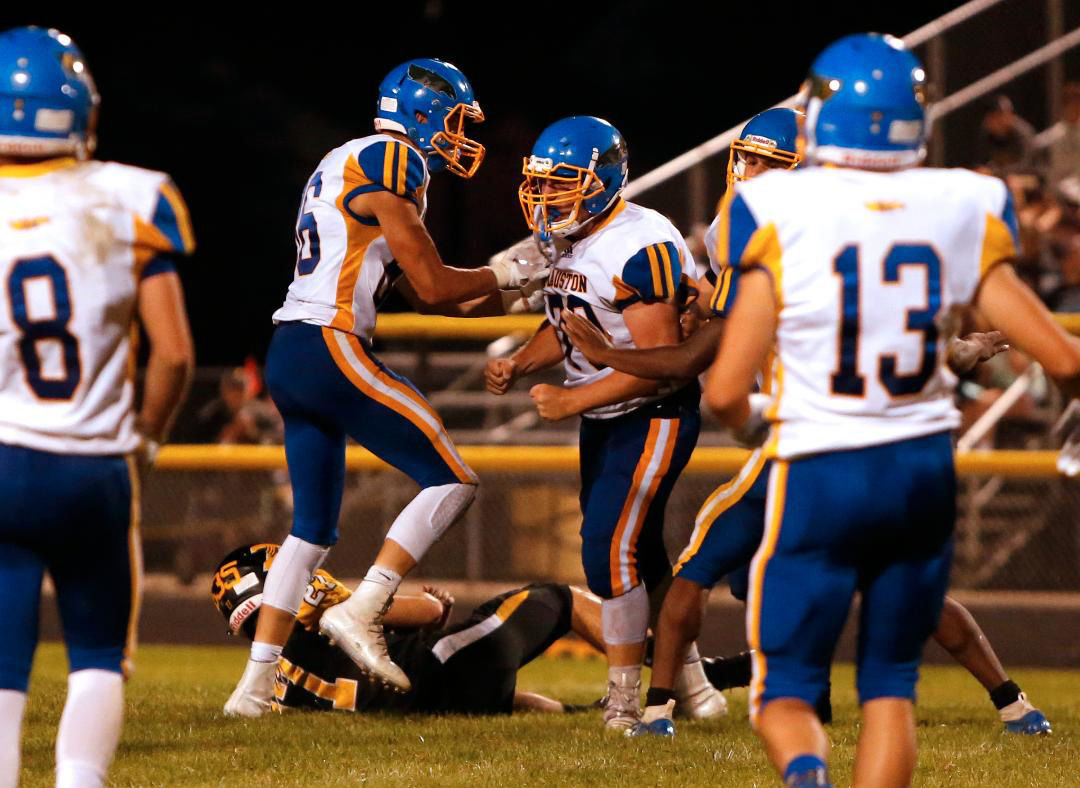 Mauston's Josh Bell is met by congratulatory teammates after tackling Tomah's Luke Buckendahl to the ground behind the line of scrimmage during the second half of Friday's season opener. 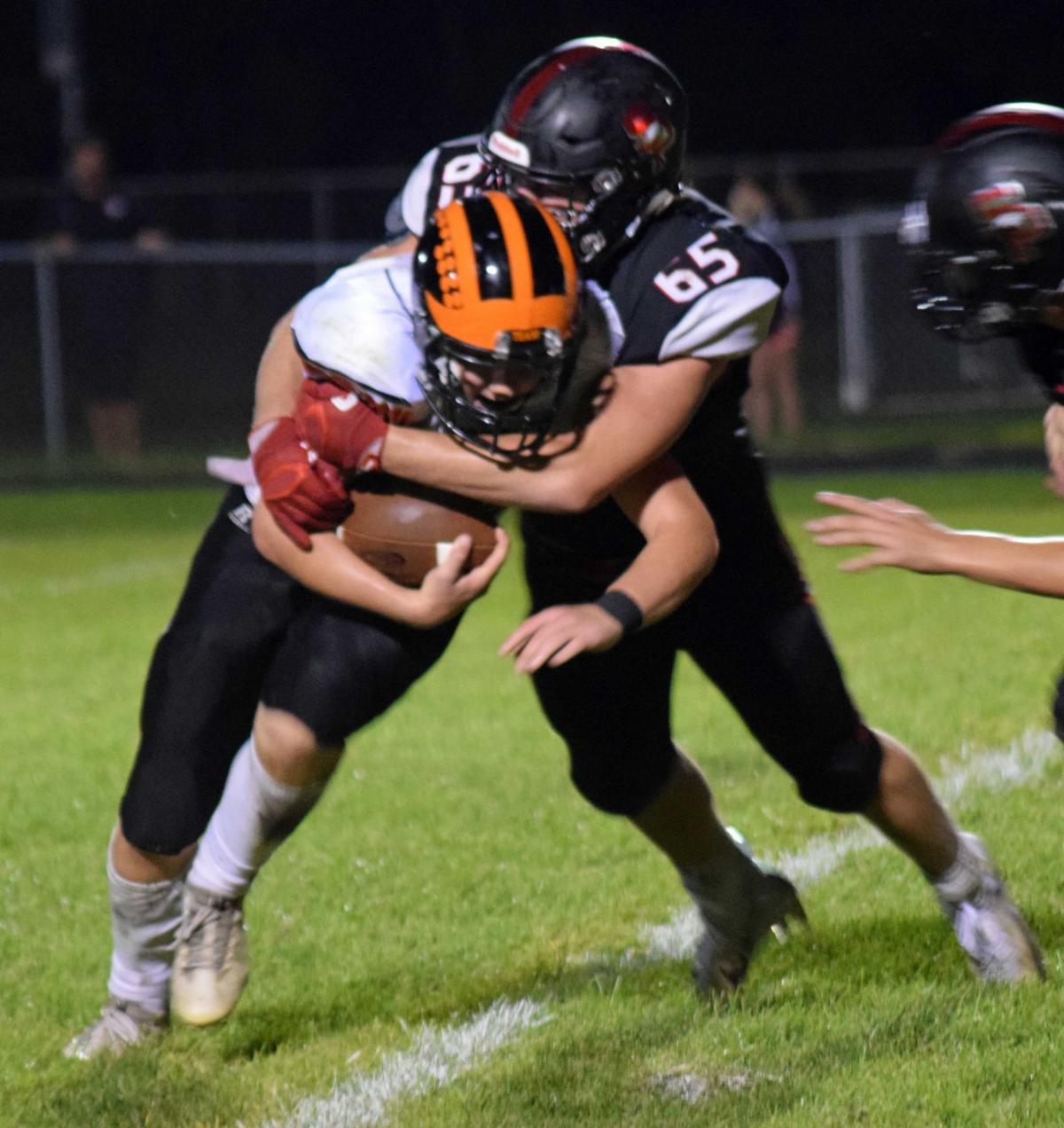 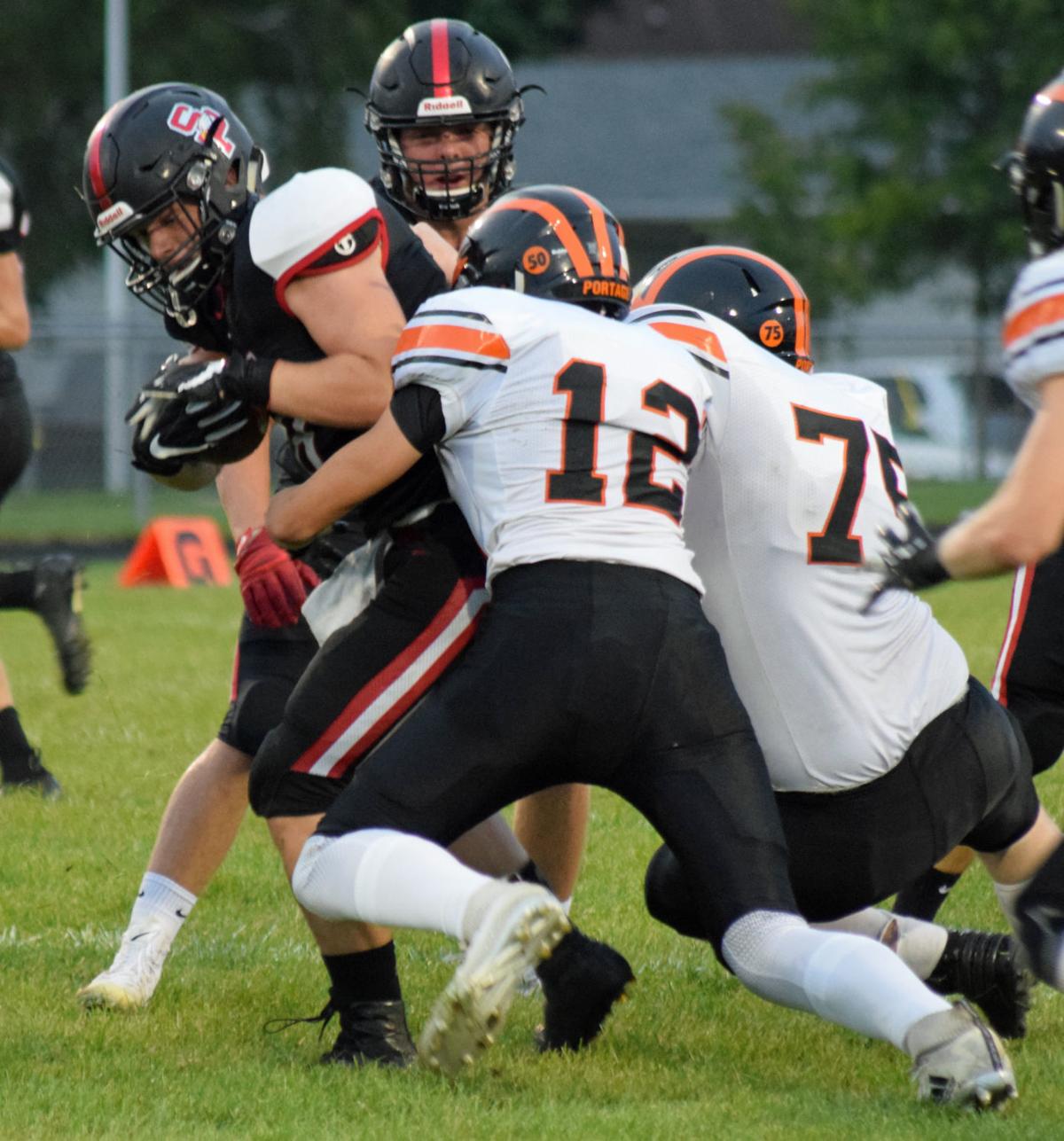 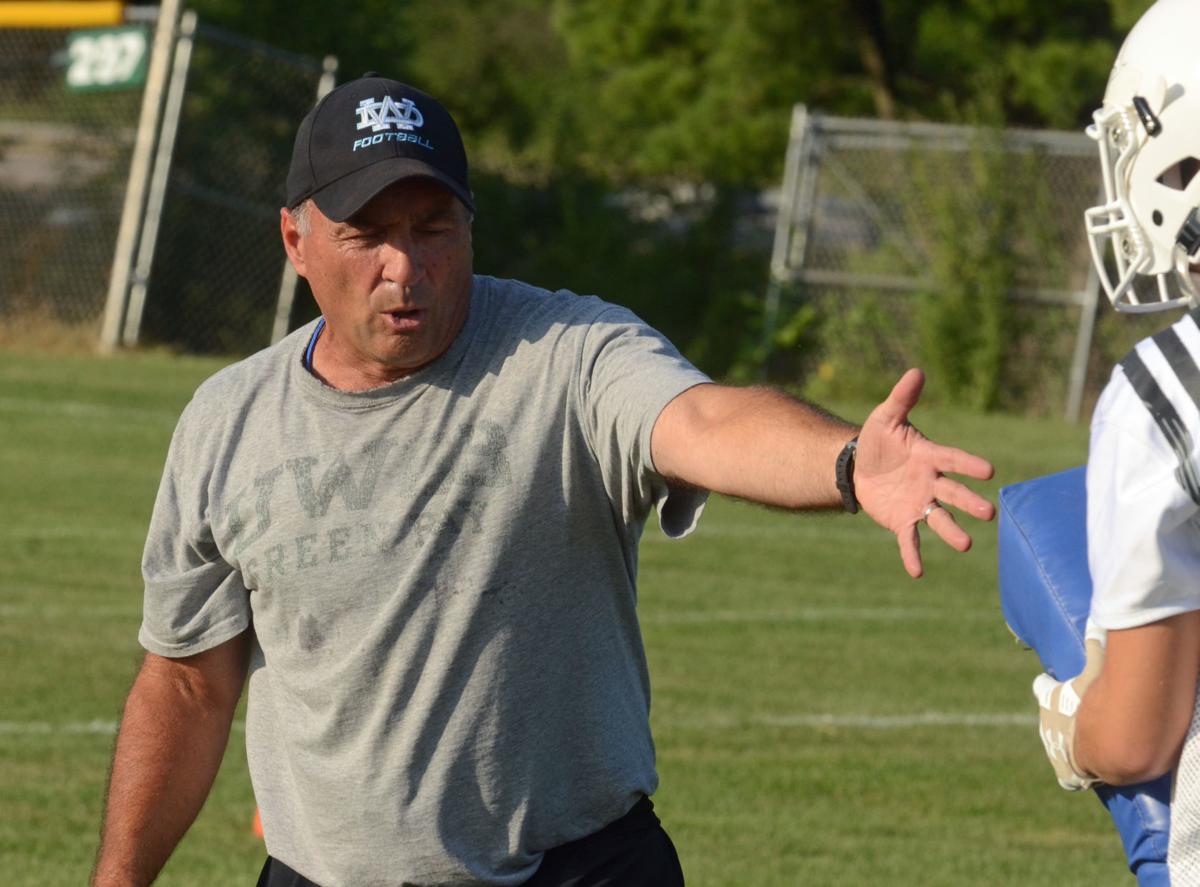 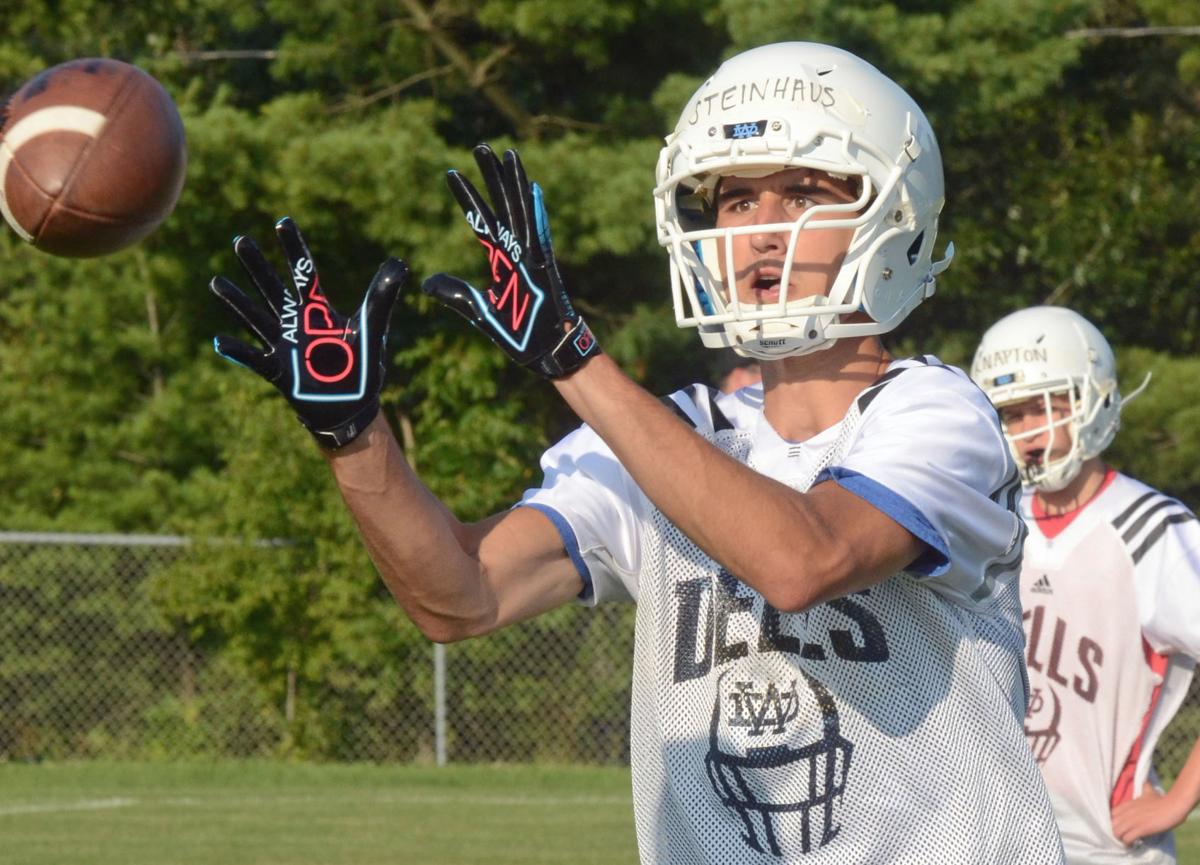 Wisconsin Dells senior Jack Steinhaus looks a pass into his hands during a defensive backs drill at practice.

The Friday Night Lights are back on with student-athletes taking the gridiron for the 2019 season.

However, high school football has taken a hit with declining numbers in the sport and some area schools also haven’t been immune to the low numbers taking an effect on its teams.

According to The National Federation of State High Schools Association, participation in high school sports declined for the first time in 30 years during the 2018-19 school year, with decreasing numbers in football and basketball mainly contributing to the decrease. Participation in 11-person football hit its lowest mark since the 1999-2000 school year.

Experts say the sport is safer than ever with more restrictions and rules put in place by the Wisconsin Interscholastic Athletic Association. However, some programs are still struggling and the reason may be beyond the game itself.

According to statistics from the National Federation of State High Schools Association, 11-person football numbers for the 2018-19 season had 388 schools and 23,154 participants compared to the 2013-14 season with 442 schools and 26,680 participants.

While concussions and injuries may make people think twice about going out for football, it isn’t the only reason for the decrease. Labecki said the sport is safer than ever with updated equipment, better rules and educating athletes, coaches and officials about concussions.

“Overall football is safer than it’s ever been,” Labecki said. “We’ve spent a lot of time making the game safer and educating on concussions.”

PREP FOOTBALL: Reedsburg built off heartbreak to win its first state title in 2009

A study completed in July by Sports Medicine Researcher Tim McGuine and his team at University of Wisconsin-Madison shows recent rules implemented by the WIAA regarding limiting contact days reduced related concussions by 57%.

McGuine said there are several reasons why not only football, but other sports have declined, including the increase in travel leagues, cost of sports and societal changes with increase in technology. He believes one of the biggest reasons for the decrease is the pressure put on youth athletes to perform at an early age and to focus on a single sport or activity.

Labecki agrees the numbers of student-athletes specializing in just one sport has increased, rather than multiple.

“Therefore if you aren’t going to play football, basketball and baseball one sport is going to suffer,” Labecki said.

“Kids basically burn out at an early age so that could be one factor,” McGuine said.

“When I looked at schools of, like less than 300 kids, that have winning traditions, chances are coaches are very well organized, they have longevity… and you usually see the organization in those programs,” McGuine said.

“Schools that are struggling usually have high rates of turnover.”

Sauk Prairie Athletic Director Josh Boyer believes coaching turnover is the reason the Eagles numbers have dropped for football. The Eagles have Clay Iverson as head coach, who Boyer sees as a stable fit for the program. The anticipated freshman class will bring an estimated 30 players to the team this year, which should help numbers, he said.

The last two years had the lowest participation, with numbers in mid to low 60s, Boyer said. The decrease affected the program, with more students playing both sides of the field and underclassman playing at varsity level to meet the numbers.

Boyer said the junior varsity team played three or four games out of the nine two years ago due to cancellations with numbers. However, it only wasn’t only Sauk Prairie having a numbers issue at the time, opposing teams also cancelled due to low participation numbers, he said. The varsity team was not affected.

The Eagles will be fine with numbers to field a JV team this year, Boyer said. This season, 71 are on the entire high school team. Out of that number, he estimates about 40-50 will suit up for varsity.

“I think we’re trending in the right direction,” Boyer said. “I think we’ll get back to that 80 threshold in our program.”

Besides coaching turnover, Boyer believes competition with extracurricular activities, like marching band or show choir, as well as family obligations and work is another reason for the drop in football numbers.

“Kids are just being pulled in multiple directions and sometimes they are not able to do everything that might be exposed to them,” Boyer said.

He said the district had its highest number of participation in athletics in the last 13 years in 2018. In non-athletic activities, its forensics team increased from numbers in the low teens to the 20s.

Necedah’s varsity football team had its first game in a year with the Cardinals beating Wild Rose with a 48-8 win Aug. 23.

Last year, the Cardinals had 21 athletes, with only two seniors. The loss mainly came from losing ten seniors from the 2017 season to graduation, said Cora Dillin, athletic director.

Due to the low numbers and inexperience of the incoming athletes, the Cardinals did not field a varsity team during the 2018 season due to safety reasons. Necedah only ran a JV schedule that season. In 2017, 26 athletes were out for football for the Cardinals. Necedah’s overall enrollment was 227 students, an increase from 208 from the 2018-17 school year.

PREP FOOTBALL: Necedah varsity football returns with an eye toward the future

Dillin said administration planned to bring back the varsity team for the 2019 season after the athletes, especially the freshman, had a year of experience playing JV.

“We always said it was going to be a one year deal of JV,” Dillin said.

She didn’t know why the participation numbers were lower but understands it’s an issue several schools are facing. While it was tough not having Friday night football games, Dillin believes the community supported Necedah not fielding a varsity team that year.

“I think we did a good job of sharing information as to why that happened and I think people understood and were supportive of the decision,” Dillin said.

This year, 23 athletes are out for football at the Juneau County based high school. While varsity is back, Dillin said in an Aug. 19 interview she isn’t sure if the Necedah’s current football participation numbers will complement a full junior varsity schedule, especially if students become ineligible.

Dillin said she is continuing conversations with the coaching staff and administration about how to increase participation numbers and evaluate the youth football teams.

“We just continue to promote our sports and the coaches continue to work with the kids and we get them involved if they are interested,” Dillin said.

Two area schools are seeing an increase in their football participation numbers.

Wisconsin Dells High School nipped the issue in the bud when it realized the football program was facing the same situation other communities are facing.

Wisconsin Dells School District 6-12 Activities Director Aaron Mack said the program started putting more emphasis into off season training for athletes, development of coaches and including all athletes and coaches in the 5-12 grade football program. Mack said its been a 7-8 year process that is “starting to pay some dividends in numbers.”

“I think now, after a few years, we are starting to see the benefits of that,” Mack said, adding a smaller senior class graduated last year and a bigger freshman class is coming in. “Those connections you have to have with kids and families is a 12 month process. And I would say in the last couple years we’ve done a better job with that and thus we’ve seen better participation numbers.”

While he said the numbers are better, he can’t sit back and breathe a sigh of relief yet. He said recruitment needs to keep happening to attract athletes at the middle school and youth level, especially because the Chiefs haven’t had a successful program the last few seasons.

“I think that’s an everyday battle for programs that haven’t been as successful that it’s going to be an every year process,” Mack said. “I don’t think we can say ‘Oh we’ve solved our participation problems as it relates to football’ because I think every year when you’re not a winning tradition football program you have to re-recruit every year to get your numbers better.”

Reedsburg Area High School Administrative Activities Director Bryan Yager said its football are healthy with 79 athletes out for 9-12 grade football and have remained consistent between 75 to 90 students. He estimates about 35 to 40 will play varsity.

Yager said he believes the program’s reputation along, its coaching staff and the community support have contributed to the consistent numbers. The Beavers made five straight playoff appearances from 2012 to 2016 with back-to-back trips to the semifinals in 2014 and 2015.

The Beavers missed the playoffs each of the last two seasons and went 5-4 overall in the Badger North Conference last season.

PREP FOOTBALL: Reedsburg aims to snap slump, get back into postseason

Yager also believes overall enrollment has contributed to the numbers, with the high school approaching over 900 students for the 2019-2020 school year.

McGuine believes there’s hope football numbers will increase again because of the proactive work being done now, including rule changes by the WIAA, coaches associations and individual coaches.

“I don’t think football needs saving more so than any other sport,” McGuine said.

McGuine said the best programs he’s seen throughout the state start with the youth program level, getting the kids involved in as much playing time as possible to build their skills.

McGuine said for parents and participants to not “be driven by fear” and realize participating in high school sports still has benefits like students being more likely to stay in school, not likely to abuse drugs and alcohol and more opportunity to go on to a higher advancement opportunity, like college or military. The effects of doing sports last into adulthood, he said.

Boyer remains optimistic football numbers at the high school level will increase again. He said it will take athletic departments and coaches providing an opportunity for student-athletes of all levels, from youth to high school, an opportunity to be successful, teaching them the sport can be conducted in a safe way.

“If we show them how to do it in a right way at a young age and through high school I think kids will be more comfortable choosing to continue, in this case, the sport of football,” Boyer said.

Reedsburg coach Brian Pottinger talks to his team during a break in the Beavers' practice on Aug. 6. Pottinger is entering his 14th season in charge of the Beavers.

Reedsburg senior Ethan Lee follows through on a pass during an offensive drill in the Beavers' practice on Aug. 6. Lee is looking to make an impact this season after being limited to just four games due to injury last year.

Jaron Murphy, right, is among the potential returning players for Necedah in 2018.

Mauston's Josh Bell is met by congratulatory teammates after tackling Tomah's Luke Buckendahl to the ground behind the line of scrimmage during the second half of Friday's season opener.

Wisconsin Dells senior Jack Steinhaus looks a pass into his hands during a defensive backs drill at practice.