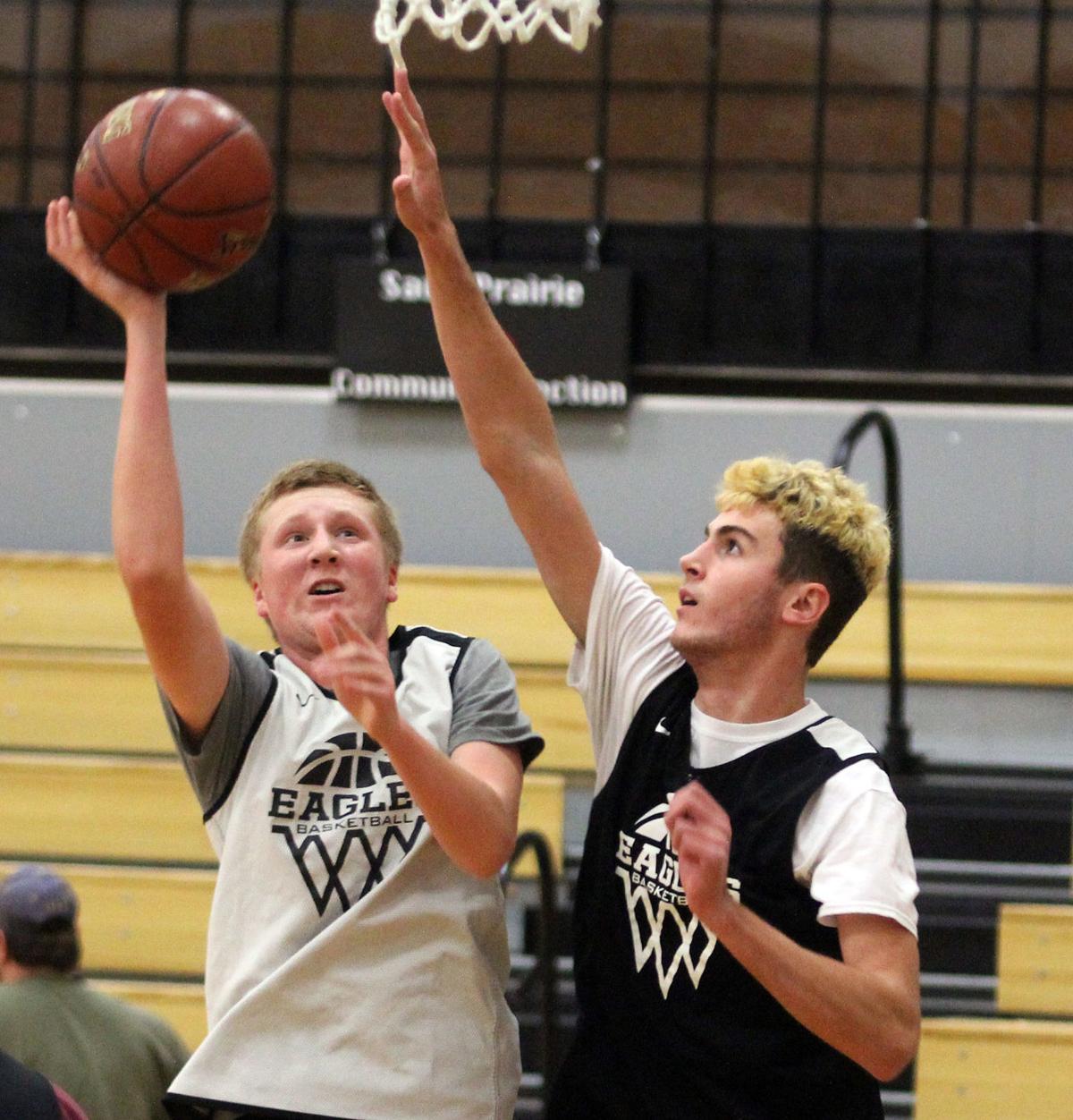 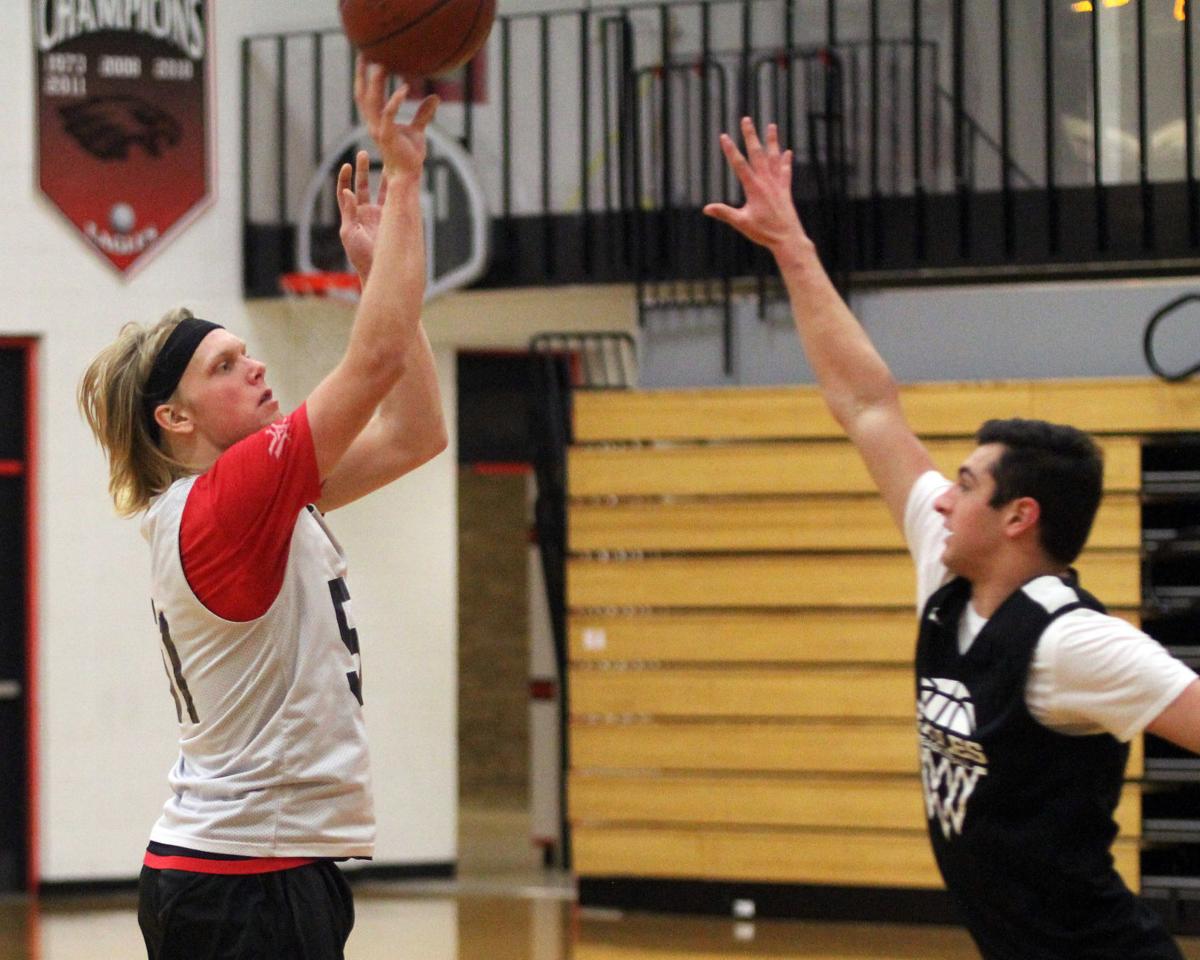 A lot of Sauk Prairie High School athletes got a taste of winning this fall.

A number of them will look to transition their success on the football or soccer fields to the basketball court this winter.

“Having them have success in both soccer and football, I think that that’s awesome,” second-year Sauk Prairie boys basketball coach Sean McGann said Nov. 21, day four of practice for the 2019-20 season. “They maybe didn’t have the basketball in their hands as much, but they’re still competing, they’re getting their bodies right and they’re learning how to win. That stuff’s going to translate to the basketball season too.”

It’s stood out in practice so far, as a group of five seniors has led the way in attacking the first practices of the year. Parker Breunig, Garrett Hertzfeldt and Ben German were the leading quarterback, running back and receiver on a Sauk Prairie football team that went 6-4 and made the WIAA playoffs for the first time since 2007, while Trevor Spray and Aaron Frey were defenders for a Sauk Prairie soccer team that went 18-3-1 record and won its first Badger North Conference title since 2016. They’re all bringing that same mindset to the gym while getting their basketball legs back under them.

“A lot of these guys put a lot of time in this summer, and it’s showing,” McGann said. “They’re playing really, really hard. Obviously it’s sloppy the first couple days, but... in terms of playing hard, I couldn’t have asked for more. They’re giving their best. That’s something that’s kind of easy to do in week one, but when we get to week six, hopefully we still play that hard.”

German, who signed earlier this month to play college baseball at Rock Valley College in Illinois, will lead from the point guard spot.

“He’s just a lot more mature,” McGann said of the 6-foot-1 German. “I think his leadership even these first four days has stood out to me.”

German is the head of a backcourt that also includes Breunig and junior Tyler Uselman, a group that has stayed relatively the same from last year’s team that went 8-15, including 6-8 in the Badger North.

It’s the frontcourt that is undergoing change after the graduation of All-Badger North selections Jack Henderson and Spencer Breunig, who combined to score 24.2 points of Sauk Prairie’s 50.3 points per game in 2018-19. Henderson was a second-team pick after averaging 12.0 points and 6.2 rebounds per game, while Breunig averaged 12.2 points and 4.6 rebounds to earn an honorable mention nod. The losses will be felt, but the Eagles still boast a healthy amount of experience.

“I like where we’re at, because there’s a lot of people who will count us out after losing our two leading scorers and rebounders from last year,” McGann said. “But how I look at it is, we’ve returned seven of our top nine.”

Spray and Brandt Wilson, who both stand at 6 feet, 7 inches, will take over as the big men. They aren’t typical post players, as both provide versatility and well-rounded skill sets that have allowed them to start plenty of games on the wing.

“They can both shoot, and they can both handle the ball and run the floor,” McGann said of Spray and Wilson. “They’re not your conventional big men, but they can do a little bit of everything, which is a huge asset.”

Spray is healthy going into the season after having to sit out the first eight games of his junior year. The Eagles lost all eight games before Spray returned to score a game-high 18 points in a win over Dodgeville.

“He’s 6-7 and he can shoot it a little bit and he’s good in transition,” McGann said of what makes Spray tough to defend. “He sees the floor well and he’s a willing passer. ... Getting him to have a really high motor all the time is the thing we’re going to work with him on. But I think being on the soccer team that won a conference championship... he knows how important every possession is and I think that’s going to help him a lot in basketball this year.”

With a team full of versatile athletes, McGann is looking to play at a faster pace this winter. Last year, the Eagles played a slow style that allowed them to allow the second-fewest points in the Badger North.

Creating more possessions also means playing a more aggressive style of defense. The Eagles mixed it up between man-to-man and zone last year, but McGann would like to add more full-court pressure this winter.

“I think the kids like playing that style more,” he said. “They’re playing harder and faster, and it also allows our bench guys to get in there more. ... They can go in there, play hard and buy somebody a breather. It’s a fun system.

“One of the biggest things with our team is it seemed like we didn’t love playing (last year). ... I think that’ll be helped by the faster system. When we’re playing well, we’re playing really, really fast and we’re having fun. That’s super cliche, but the reason they’re out for basketball is they enjoy it.”

The Eagles have built up limited experience playing the new style, including a summer that had optional weight-room sessions four days per week as well as skill sessions, tournaments and a four-week league in Waunakee. Everything has ran more smoothly now that the players have more than a year in McGann’s program.

“Last year was my first year coaching and I felt so unprepared going into it,” McGann said. “It’s crazy what one year does to you. I feel way more prepared, and I think our coaches are on the same page with what we want from our guys. ... (This year) we’re focusing not on the huge picture but on a lot of those details you don’t always think about. Focus on those things and the game will take care of itself. ... They know what I expect of them, they know how hard I want them to be competing in practice, and that practice matters.”

If the Eagles put together enough good practices, McGann expects they’ll be competitive in the Badger North. Sauk Prairie finished fifth in the eight-team conference last year, while Mount Horeb went 14-0 to win the title. McGann doesn’t expect as much separation between the teams this winter.

“Even going back to when I played, I feel like there’s always a clear-cut favorite team to win,” said McGann, a 2012 graduate of Baraboo. “Last year, every coach would have told you Mount Horeb... or usually it’s Waunakee or DeForest... but this year I really have no idea. ... There’s not really a team that’s like ‘oh, wow, they’re the clear-cut favorites.’ I think it’s going to be awesome. I don’t think there’s going to be a single team that goes 14-0, and I don’t think there will be a single team that goes 0-14. It’s going to be really balanced.”

The Baraboo High School wrestling team is coming up big when it matters.

The Warriors managed just 11 points in the second half after trailing by just three at halftime.

The senior scored a game-high 18 points and helped the Warriors to a fifth consecutive win over the Pumas.

The Eagles outscored the Warriors 32-11 in the second half for their fifth win in their last seven games.

The Eagles sunk their claws in defensively, earning their first regular season win over the Warriors since 2016.

The sophomore's 10-3 win at 113 pounds moves the Thunderbirds to 4-0 in Badger North Conference dual meets.