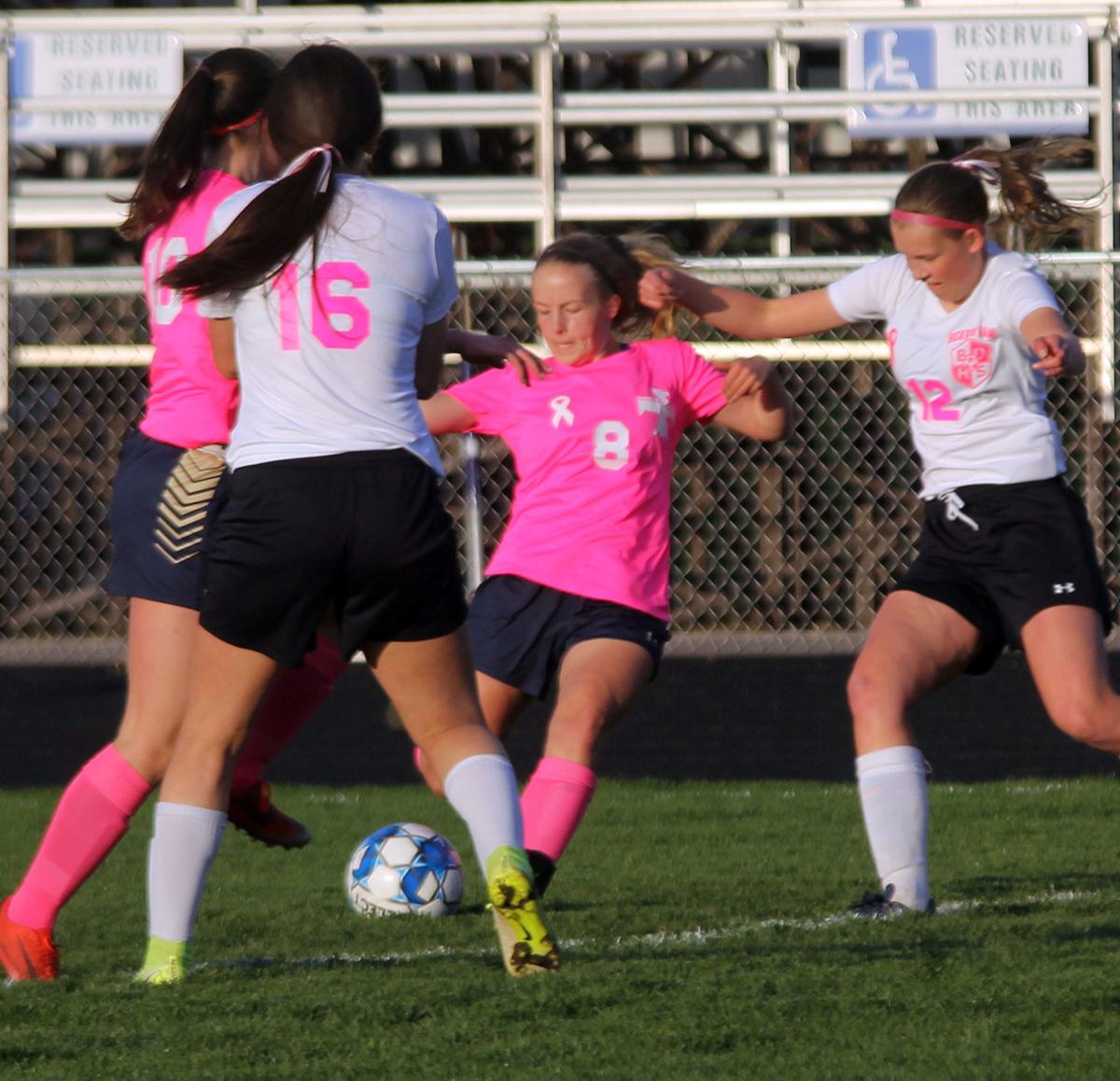 Baraboo's Kaela Wunluck takes a shot during a home game against Beaver Dam in May 2019. Wunluck, a senior, is entering the 2021 season as one of the only Thunderbirds with varsity playing experience. 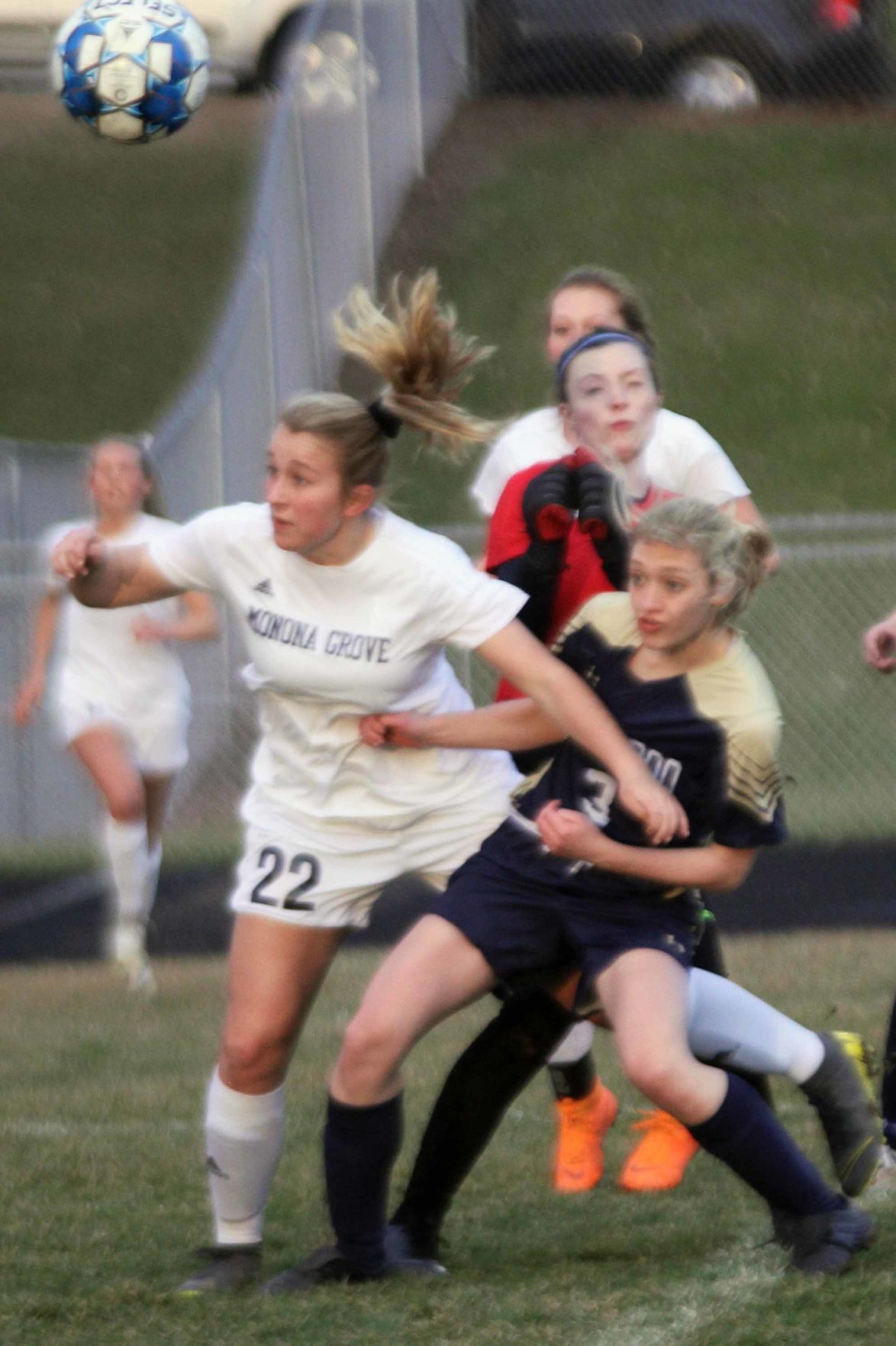 The 2021 Baraboo High School girls soccer team is going to look completely different than the one that walked off the field following a 2-0 WIAA regional loss at Burlington on May 28, 2019.

With what Baraboo coach Tyler Lang has seen in the extended offseason, he expects that — after nearly two years off — the new-look Thunderbirds will take the field enthusiastically this spring.

“It’s definitely a much different team than we’ve had the past four years with that big senior class graduating,” Lang said Thursday, referencing Baraboo’s class of 2020 that would have had as many as 15 girls on last year’s team if COVID-19 hadn’t canceled the season. “One thing that’s going to bode well for our team is just the competitiveness. These girls are fierce. They come ready to play and they know how to play.”

For the upperclassmen on Baraboo’s roster, some of that enthusiasm stems from the fact that they didn’t get to play last season. But for the newcomers, Lang sees a natural excitement and competitiveness that he hopes will mesh well as the team attacks its pandemic-shortened schedule.

“A lot of the girls in the program now weren’t really involved (in the lost season) because they were in eighth grade, or they were just underclassmen,” Lang said. “The ones who did have to go through not having a season can kind of instill that and make sure the girls are appreciative of having a season.

“I think there’s a lot these veterans can teach these younger players, and vice versa. ... There’s a lot of talent coming through and players will be able to learn from each other, not just in terms of team chemistry and how we play but individually too.”

That’s where the 15 offseason contact days allotted by the WIAA have been particularly useful. Lang said that those extra sessions, which have all been held inside thus far, offer a fresh start as the young team forms an identity. With more than a month before the regular season starts, the T-Birds are hoping to be accustomed to playing together by the time they host Mauston on May 4.

With that goal in mind, the T-Birds have been calling on a quote from Kenyan marathon runner and Olympic gold medalist Eliud Kipchoge, who said, “100% of me is nothing compared to 1% of the whole team.”

“We’re trying to adopt that right from the very beginning,” Lang said of taking on Kipchoge’s mindset regarding teamwork. “Obviously it’s great and beneficial to work on your skills and self-improvement, but ultimately we want to make sure that we’re playing together as a unit so we can accomplish the things we’re looking to.”

Fortunately for the T-Birds, they aren’t starting completely from scratch.

“There’s a lot of talent with this new group and they’ve all been playing soccer for several years now,” Lang said. “A majority of them have been playing together, so they already have good team chemistry. What we’ve been focusing on is team mentality and the mental aspects, as well as how we want to play as a program.”

That has allowed the T-Birds to dip their toes into the details a little earlier than usual with a team with almost no varsity experience. By the time the first official practice is held April 26, the T-Birds should be ahead of their typical pace.

“We’re paying attention to the little details,” Lang said. “Things that can be really important in a game but may not always be focused on, like making sure that we have depth when we’re possessing the ball and how we move ... that kind of stuff. It’s been really great to be able to highlight some of it from the very beginning.”

“They’re a very coachable group. ... Just watching the 4-on-4 or 5-on-5 scrimmages, we’re already seeing some really great concepts coming to life. Overall, we as coaches are very impressed with the level of play, speed of play, decision-making, creativity ... and we haven’t even been outside yet.”

While the T-Birds plan to be as prepared as possible by the time they take the field, there will still be some growing pains present with a young group. Lang has been there before, as he also coaches a young Baraboo boys team that went 13-3-1 last fall to win the program’s first regional title in program history.

“The biggest thing I think the girls will experience is the speed of play and the talent at the varsity level,” Lang said. “Not playing that before, it can kind of be shocking. But from what we’re seeing so far from these contact days is that they’ll be able to adapt to it.

“It’s very similar to the boys program where we have a big freshman and sophomore contingent. So I think sky’s the limit and there’s a lot of exciting times ahead the next several years.

Carly Moon will whittle her work load down to one sport when she tees it up for the Winona State women’s golf team next year.She’ll leave a co…

Baraboo's Kaela Wunluck takes a shot during a home game against Beaver Dam in May 2019. Wunluck, a senior, is entering the 2021 season as one of the only Thunderbirds with varsity playing experience.