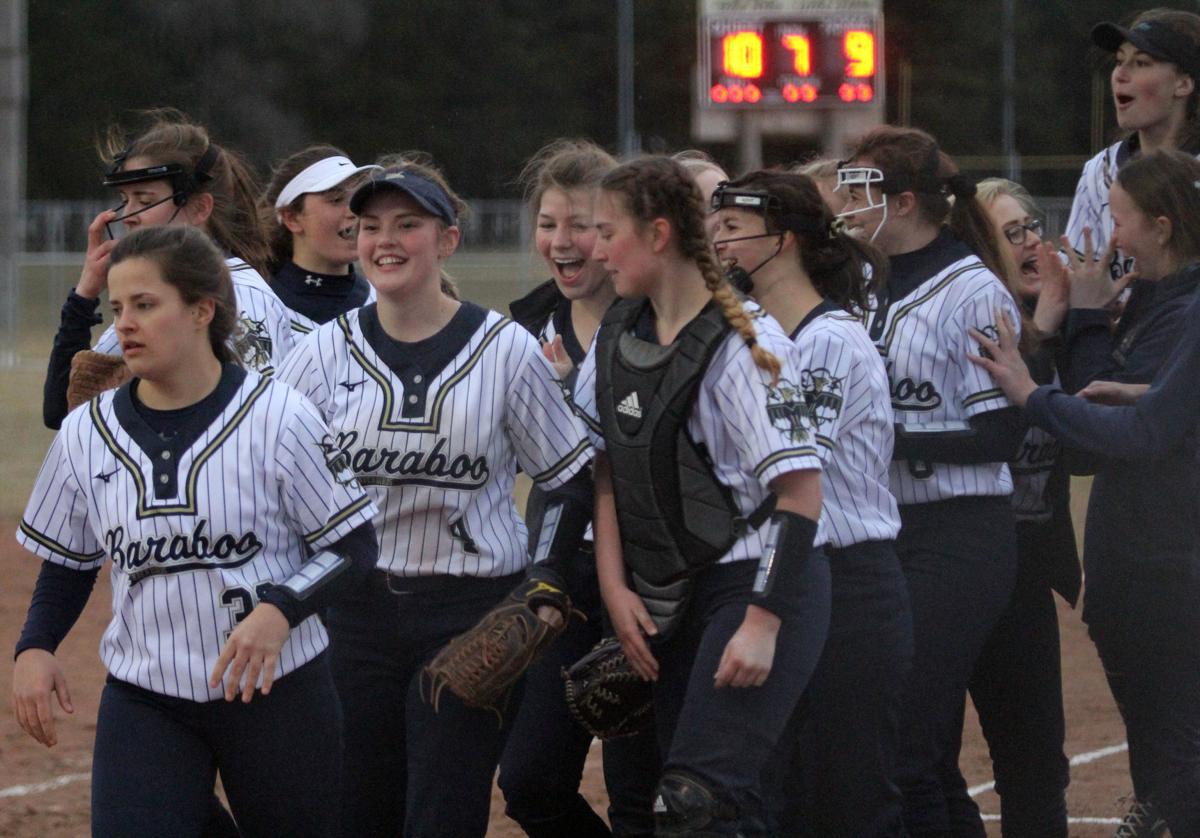 The Baraboo softball team celebrates after a 10-9 win at Sauk Prairie in March 2019. 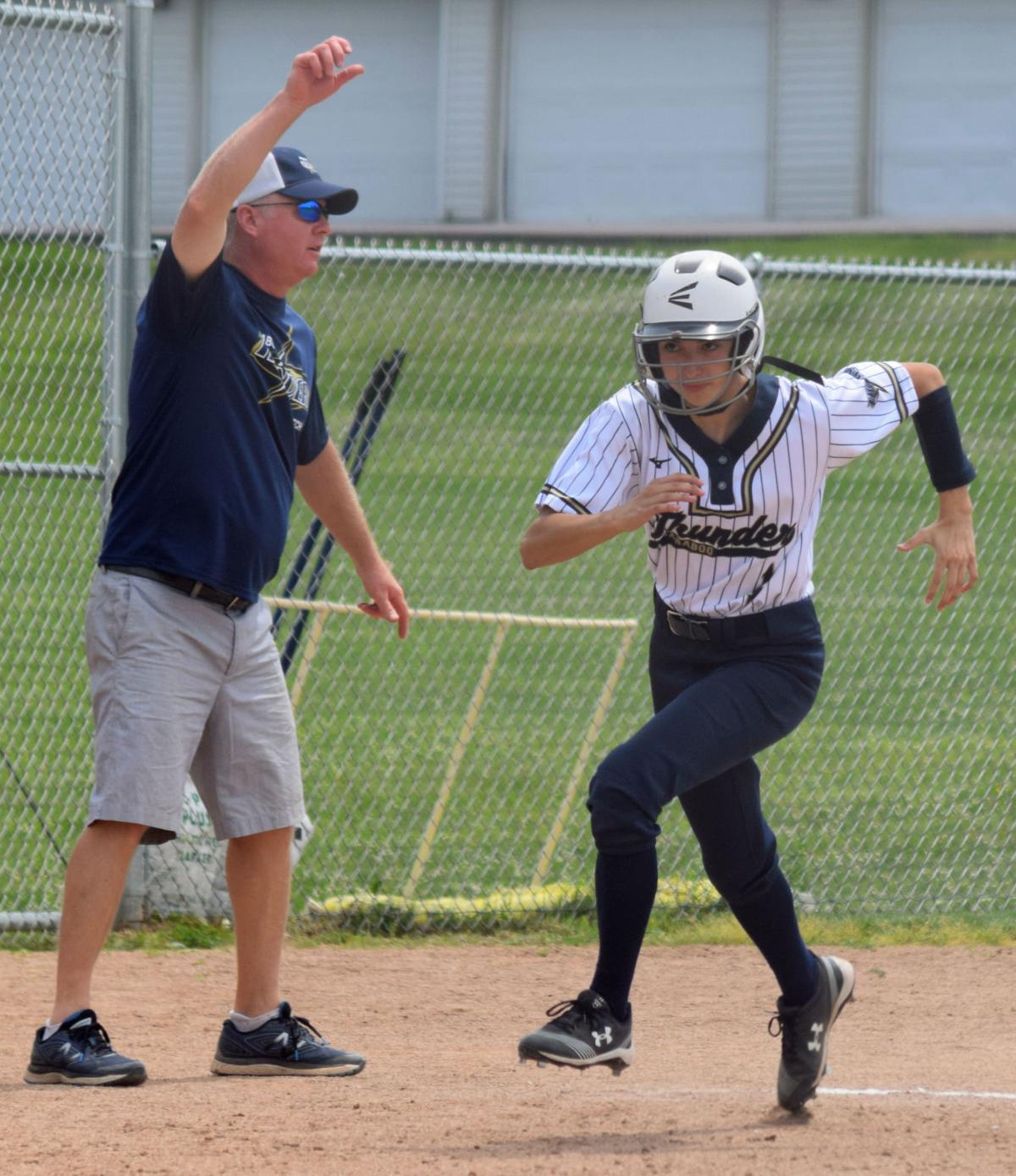 Baraboo's Aria Schindler heads toward home during a game in June 2019.

The Baraboo High School softball team has been taking advantage if its extra indoor days this spring, diving into the fundamentals during the 15 contact days provided by the Wisconsin Interscholastic Athletic Association due to the COVID-19 pandemic.

“I think the kids were really excited to get back,” Baraboo head coach Dan Lewison said Tuesday, noting the Thunderbirds have used eight of their allotted days thus far. “We started on the 15th, and that’s kind of normally when the season would start.

“We’re using those days to the fullest, getting a lot of skill work done. They’re pretty well organized with what we’re doing and just trying to take advantage of those extra days. They’ve certainly been beneficial to our program.”

The WIAA’s goal with the contact days was to give teams that missed out on opportunities due to the pandemic a chance to reacclimate before playing their first competitive high school games in nearly two years.

While a number of the Thunderbirds were able to play last summer, Baraboo High School’s last competitive softball game was an 11-1 loss to Verona in a WIAA Division 1 regional final on May 23, 2019. “I do think it was really forward-thinking of the WIAA to allow teams to do this,” Lewison said, noting Baraboo has had 20-plus athletes showing up for each contact day. “When you think about it, we lost all of last season and we’ve already had more contact days and workouts than we had all of last summer. Everything was so weird last year ... we started that around the last week of May and we were done by the end of July. That’s about eight workouts, and we’ve already had eight workouts this spring.

“So we’re doing a lot of fundamental work, getting a lot of drilling done and a lot of cuts in. I feel like once we officially start practice the 19th and then roll it into games, we’re going to be as prepared as we can be.”

The T-Birds, who are currently off on spring break, have spent seven of their first eight contact days in the gym. There are certain aspects of softball that translate better to an indoor setting.

“Defensively, I feel good about where we’re at,” said Lewison, who has led the Baraboo Thunder club program for years and took over the high school program in December 2018. “Our assistants Derek Smith and Rusty Schider, who handle the defense, have done a phenomenal job. We have not swung a bat hitting a grounder to an infielder the entire time in that gym. It’s all footwork and working on certain throws you have to make in the infield, all that sort of stuff. From an infield standpoint, I feel like we’re making tremendous strides with footwork. Playing defense is all with your feet. If you don’t know where you’re supposed to be, it’s hard to play defense.”

Therefore, the Baraboo infielders have been in the gym honing their footwork around second base, as well as underhand tosses, throws on the run and other details that should make everything more second nature once they move outdoors. Outfield can be a little more difficult with the current constraints, but Lewison feels comfortable with where the T-Birds are at defensively.

“They’ve been working on some really good stuff, teaching kids not to take too many steps,” he said of the work the outfielders are doing indoors. “A lot of times, outfielders will pick up a ball in the outfield, stand up, do a crow hop and take four steps. We’ve been working on that footwork, where they have to run over to a still ball, pick it up and just throw it without taking a huge grow up. You’re emulating throwing it to second base. And then stuff like teaching the kids how to skip it in. Don’t throw a moon ball, but throw on a line and skip it into second base.”

Those fundamentals are going to be crucial in a spring season that’s been shortened to allow for the WIAA’s alternate fall season, which is currently underway.

“I think we have 24 games scheduled, starting April 27 and our last scheduled game is June 8,” Lewison said. “We’re really packing in a lot of games in a short period of time, so you really have to get all your installs, coverages, plays and stuff. You have to have all that done by the time you start or else you’re not going to get to it.”

Lewison expects to use five more contact days nailing down the fundamentals and hopefully getting outside for a bit more game-like action.

“The biggest challenge to me is finding enough time and enough nice weather days outside to face live pitching,” Lewison said of how it’s hard to simulate at-bats while inside. “Number one, you’re a little leery about putting your starting pitchers against live hitting and having someone take one off a leg or something and now they can’t pitch. Now our hitters are hitting off tees, cages, soft toss, front toss, pitching machines ... all those.

“Kids can look amazing in a cage and amazing on tees, and then they face live pitching and it looks like they’ve never swung a bat before. So just trying to get more live pitching. That’s one of the things we’re trending toward because we’ve got so much work done already. Once we’re able to get outside more, we can have our pitchers face live hitting.”

If everything comes together, there shouldn’t be too many surprises when games get underway. By the time the T-Birds open the season at Waunakee on April 27, Lewison figures they’ll have had nearly 20 days of work between the contact days and official practices. “We’re not ready yet, but we feel pretty good about where we’re trending, that’s for sure,” said Lewison, who has also scheduled an April 24 scrimmage at Poynette. “I feel like we’re way ahead of where we were two years ago.”

The Wisconsin Interscholastic Athletic Association made the call Tuesday morning.

The Baraboo softball team celebrates after a 10-9 win at Sauk Prairie in March 2019.

Baraboo's Aria Schindler heads toward home during a game in June 2019.